When Travis Samuel finished his record breaking 24 hour Zwift ride, he stopped pedalling, un-clipped, sat down on the ground and started crying. “It was not a moment of joy,” he says, “My legs were so numb I couldn’t feel them—I was in so much pain.”

Still, he says, the ride was worth it.

A Trent University student, Samuel is an experienced racer. The 25-year-old has previously raced for Silber Pro Cycling and DCBank Pro Cycling, but this year he will be joining Toronto Hustle for the (currently on-hold) 2020 season.

Samuel has a number of personal ties to the healthcare industry. His dad is a nurse at the Whitby Psychiatric Hospital, both his aunt and her partner are nurses in the Yukon, and he has a few friends in the industry as well. “I’ve been able to see what’s actually happening to healthcare workers,” says Samuel, “the stress that they are under every day and what they’re asked to do with limited resources.”

Before the event even started, participants had raised more than $100,000 for the cause, and Toronto Hustle had announced Samuel’s intention to go for the world record for farthest virtual distance in 24 hours.

In 2019, Veal had set the 24-hour Zwift record at 952 km. Recently Kurt Pauwels, a Dutch rider, rode 988 km in 24 hours. Although Samuel couldn’t verify whether Pauwels had the new record before the start of Crush Covid, he aimed to do 1,000 km to be safe. This meant he needed to average no less than 42.1 km/h for the ride and spend no more than half an hour total off the bike—whether that was to change kit, stretch or use the washroom.

By the end, more than $200,000 was raised and 418 riders participated in the event. Veal blew past his previous distance, covering 993 km in total. Bird, who has multiple rainbow jerseys from Gran Fondo World Championships, rode an impressive 945 km. Samuel took the world record, surpassing his 1,000 km goal by 8 km. “You couldn’t have painted a more picture perfect scenario,” he says. “I was constantly in a group draft, people were always there supporting me.”

The group helped him keep a steady pace throughout the ride, during which he averaged around 200 watts. “Most of the time that’s a recovery zone for me,” says Samuel, “but it gets much harder when you do it for 24 hours.”

Samuel set himself up in his dad’s garage in Whitby Ont.—his pain cave 24 hours. “It’s not my home turf setup, but it worked out even better,” he says. Leaving the garage door open, he didn’t need a fan, as the weather stayed under 10 degrees the entire ride. He even closed the garage door at one point because he was getting a bit chilly.

His dad acted as his soigneur, checking in on him—mentally and physically—and bringing him food and drink.

Planning for the ride, fuelling was Samuel’s main concern. “Going in definitely my biggest fear was not getting the nutrition right,” he says. “I knew it would be the biggest factor in determining the end result.”

“On a trainer, you’re sweating quite a bit and it’s really hard to limit liquid loss. You’re working the entire time and burning almost more than on the road because there’s no coasting.”

He tried to drink about a bottle every 30 minutes, although later in the ride this dwindled to about every 45 minutes to an hour. Food-wise, he ate solids for as long as he could, chowing down on bowls of oatmeal, rice and pasta. “I didn’t know what my body would do in the late stages,” says Samuel. “At about the half-way point I transitioned to bars, gels and liquid food mixes, as solids weren’t as appetizing anymore.” He could still eat bagels and bananas until about hour 15 at which point he was only taking gels and bars. By hour 22-23 the only thing Samuel wanted to eat was ice cream sandwiches. In the end, he burnt more than 18,000 calories—an incredibly huge energy expenditure. To put that in perspective, 18,000 calories is: 11 medium Domino’s cheese pizzas,
Or, 44 butter tarts,
Or, 75 Clif bars,
Or, 202 bananas,
Or, 13.5 large bags of Doritos,
Or, 180 gels,
Or, 113 ice cream sandwiches.

Surprisingly, he didn’t need much caffeine. He had weaned himself off of it the week before the event, and ended up having only 100 mg around 6 am and 100 mg at noon, about the equivalent of 2.5 shots of espresso.

Samuel kept his energy up by listening to EDM (“I’m 100 per cent an electronic person.”), chatting with friends and playing games on his phone. Zwift requires a lot of RAM and his older computer can barely power the program itself, much less another window for a streaming service. “I watched my avatar the entire 24 hours,” says Samuel with an empty chuckle.

“There are so many things you don’t think about until you’re hours into the ride,” says Samuel. He had no aero bars and his hands inflated to two or three times their regular size. His ankle muscles hurt from the repetitive pedalling movement and his neck was cramped and sore. “It’s the little things that added up,” he says. 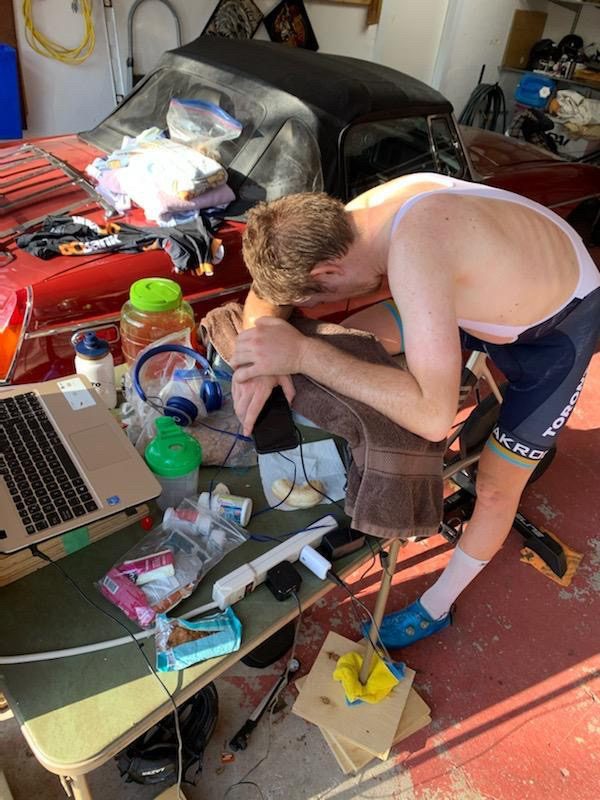 The middle of the night, between midnight and 2 a.m., was the hardest time. Fewer people were supporting him on Zwift and the urge to call it quits was growing. At the darkest moments of the ride, Samuel was thinking about the healthcare workers that the fundraiser was benefiting. “A few times throughout the night I was ready to toss in the towel,” he says, “but I had the campaign page on the background of my phone and I brought the page back up whenever I wanted to quit as a reminder of how far we came, and how much this ride has meaning for these healthcare workers.”

“Healthcare workers don’t get to choose to quit in the middle of a long hard shift and go home for the night,” he says.

One week into recovery Samuel has been getting back onto the bike and his legs are returning to normal (although his saddle sores are still quite present). “I still can’t believe this,” he says, “I don’t think when we launched this about two weeks ago any of us could have guessed this would happen.”

As for whether he’ll attempt any more records or ultra races in the future: “In a few weeks I may start to think about it, if an opportunity presents itself,” he says. For now, he’s still recovering from his world record ride.