Canadian and Pan American champion Maghalie Rochette won her first career UCI Cyclocross World Cup race as the 2019-2020 series kicked off at Jinglecross in Iowa City on Saturday. Rochette led for most of the race, undeterred by an early sandpit crash. Her run-ups on Mount Krumpit were one of her strengths.

Who was there and who wasn’t

World champion Sanne Cant was skipping the two races in the United States of America, while the reigning World Cup holder Marianne Vos was busy winning road race Tour Cycliste Féminin International de l’Ardèche on Saturday. One conspicuously absent rider was Denise Betsema, fourth in February’s World Championships and winner of the Koksijde round of the World Cup last season; she returned an adverse analytical finding for endogenous anabolic androgenic steroid in a sample collected at the Hoogerheide World Cup race and is suspended.

Rochette was in the front row clad in her Pan American champions jersey. She was doing well on Lap 1 until the sandpit took her down.

Rochette didn’t lose too many positions, and found herself in a group of five that separated itself. Brit Evie Richards took the lead, but Rochette and CCC’s Inge van der Heijden came back to her. Jenn Jackson was seventh place after Lap 1.

Rochette led up Mount Krumpit on Lap 2 of six. 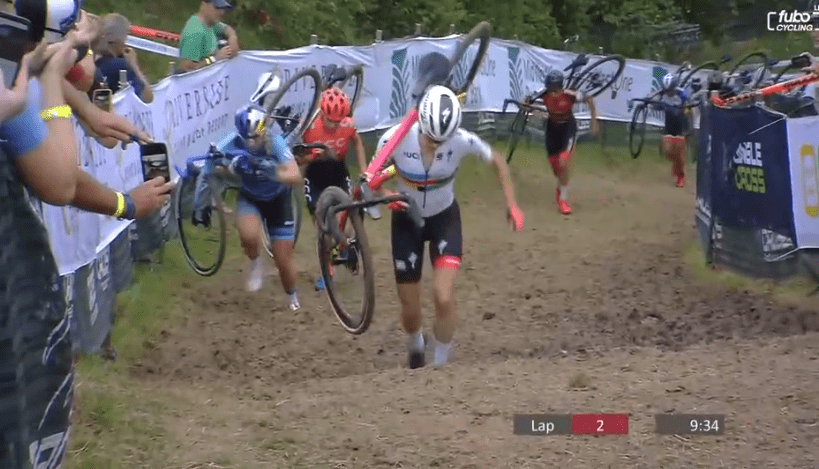 On Lap 3 Rochette continued to lead a group of six that included Jackson. But Czech Katerina Nash drew closer. Nash was only 3-seconds behind midway through the race, with young American Clara Honsinger 6-seconds in arrears. 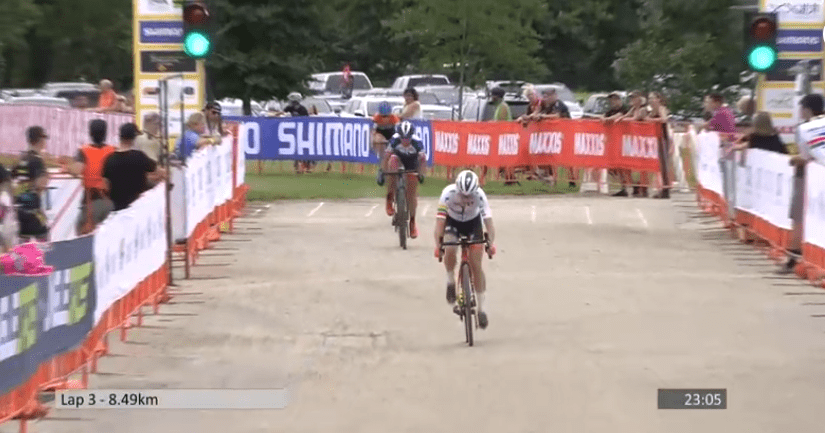 Honsinger and Nash made the junction after Lap 4‘s sandpit. The trio was 21-seconds ahead of a chase group after four laps. Jackson was 8th and West was 19th.

Again Rochette pulled out a gap in Lap 5.

Nash shook loose of Honsinger and was 11-seconds behind the Canadian going into the bell lap.