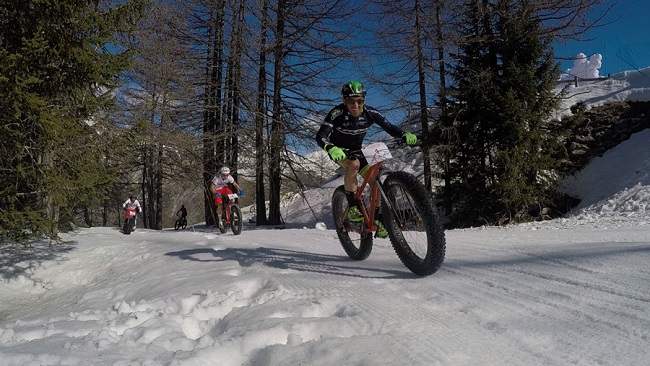 As yet another testament to the growing enthusiasm about Canadian fat biking, there’s a particular race series, made in Canada, that will be returning for its second full year of competition in 2016.

Held for the first time last year in Quebec, that event is called the Mahikan Race.

Competition is divided into two types: Fat Cross and Fat Fast. The former consists mainly of snowy, sandy looping circuits, each three to five kilometres in length. With precipitous downhill descents, bumpy ground, tricky singletrack runs and other obstacles, the race lasts about an hour and a half.

The Fat Fast race, as the name suggests, raises the tempo on the fat bike competition of Mahikan. Involving a limited field of riders, the course mixes small uphill climbs, natural obstacles and downhill descents, all of which are concentrated along a highly technical route of snow and sand. This race is perhaps the more spectacular of the two competitions as well. Winning involves harnessing explosive strength in the saddle, trying to keep from being eliminated out of the fast-paced, occasionally rough-and-tumble race.

The first competition Mahikan Race took place a year ago in Roberval, Que., on the shores of Lac Saint Jean. Broadcast to the world, it was followed by another race in Italy, in the town of Bardonecchia, and then in October of 2015 on the beaches of Alassio, near Genoa. In both the riders it attracts and the buzz it generates, the Mahikan Race is quickly becoming an iconic event in the world of fat biking, whether on sand or snow.

This month, the next competition returns to Canadian soil—or snow, as the case may be.

In Bromont, Que., an hour from Montreal, the first Mahikan Race of 2016 kicks off at the National Cycling Centre du Quebec on Janary 30 and 31. That race, the 4th edition of the Mahikan, will be followed a week later by a 5th in Roberval, Que.—where it all began—on February 6 and 7. This year’s competitions will draw elite riders from across disciplines, like downhill world champion Loic Bruni, as well as Canadian cross-country and CX rider Raphael Gagne.

Further information can be found at mahikanrace.com.