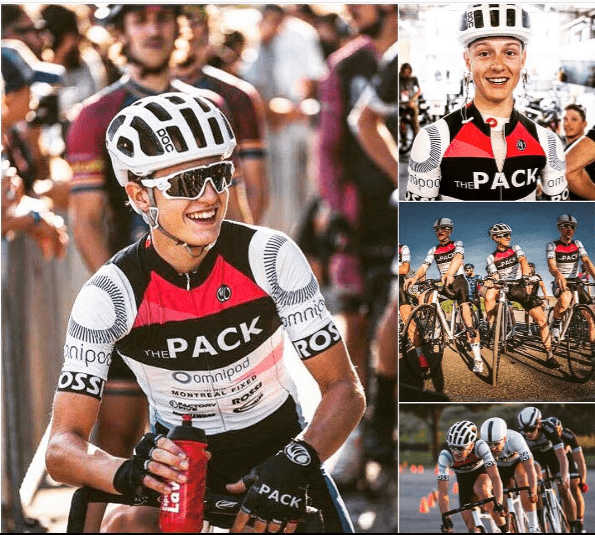 On the Mount Royal street where Clément Ouimet was killed after a collision with a car earlier this week, 250 cyclists, in a silent memorial ride, gathered to honour the talented young Junior rider on October 6.

The ride up Camilien-Houde Way, CBC reports said, was organized by Cyclovia Camilien-Houde — an advocacy group that has been lobbying to make the road car-free.

Before setting out for the ride, cyclists stood for a moment of silence, arms raised in memory of Ouimet. Then the assembled riders took to the two-kilometre climb — a “sea of helmets,” the CBC said — before ending the memorial ride with a vigil at a parking lot near Beaver Lake. Bouquets of flowers adorned backpacks and jerseys. One participating rider, Virgine Gauthier, was a squadmate of Ouimet’s in the ranks of Espoirs de Laval — the team that Ouimet joined only this summer.

“We’re living a real nightmare. It feels a little surreal,” Gauthier told reports with CBC Radio-Canada. “But what reassures me is to see to what point Montreal’s cycling community is mobilizing itself to hope to create a change that should have happened 10 years ago.”

Describing Ouimet as a spirited teammate and a passionate athlete for whom cycling was a way of life, Gauthier told reporters that the squad fell in love with the 18-year-old rider the first week they met him.

Cyclists, she added, are particularly vulnerable on the road where Ouimet, who died in hospital after the collision due to a head injury, was hit. That vulnerability is a consequence of the absence of stop signs on Camilien-Houde, she noted. According to the accounts of other cyclists, U-turns — like the kind made by the driver who fatally collided with Ouimet — happen regularly. To advocates and cyclists, life-threatening driving behaviour happens altogether too often on the popular Mount Royal cycling route.

Denis Coderre, Montreal’s mayor, is putting together a working group with the aim of limiting traffic across Mount Royal.

Meanwhile, charges against the driver who collided with Ouimet may yet be pending.