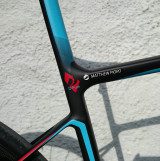 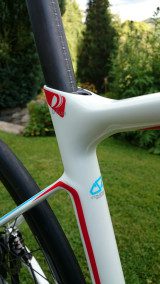 “Anything we do, has to be authentic to the end user. No gimmicks. No fluff. No BS. No little things stuck in it,” said Jon Swanson. The global category manager for road at Giant Bicycles was speaking about the Taiwan-based company’s 2015 Giant Defy line. Giant’s set of endurance road machines was relaunched this past week at an event in the Scottish Highlands.

Swanson has been at Giant for three years and has overseen three projects with the company: the Propel, the TCX and the new Defy. At heart, he’s a straight-talking engineer who uses language precisely. He’s not one for spin. He also brings high demands to all of his projects. With the Propel, Swanson wanted to launch a bike that would put Giant at the top of the aero road category, a class of bike that the company entered into late compared with others. He pushed for a bike that not only did well in the wind tunnel, but was also light and stiff, features that don’t necessarily complement the pursuit of air cheating abilities.

With the new Defy, especially the top-of-the-line Advanced SL, Swanson and his team of three engineers and three designers had a soild foundation from which to build. “We felt that the geometry was incredibly solid, the bike just needed some work in other places,” he said. One areas that the team addressed was that ever-important quality of a performance frame: stiffness. Swanson wasn’t worried about pedalling stiffness, the feature that keeps the bottom bracket from budging when you add power. “Once you get past a certain point, it does not matter because people are only so strong. Once you get above the 65 N/mm, it doesn’t matter anymore. For example, the Giant [Defy Advanced SL] is at 70, and the [Specialized] S-Works [Roubaix SL4 Disc] is at 67. You’ll never be able to tell the difference. This bike could be at 95, that one could be at 150. Again, you’ll never tell.”

The type of stiffness that the team did focus on was on frame stiffness. The stiffer the frame—especially from the head tube, along the down tube and the chainstays—the better the bike handles when cornering hard. The frame’s stiffness comes from the types of carbon fibre used, fibre orientation and the resin that binds everything together. The flagship frame of the Defy series takes its name from Giant’s top composite, Advanced SL. To test this frame, it was fixed at the rear dropouts. At the fork’s dropouts, a tortional force was applied. The defection was measured in Newton metres per degree, or the amount torque applied to the frame divided by the degrees that it moved. The higher the number, the stiffer the frame. Giant measured the Defy Advanced SL at 140.87 Nm/degree.

The frame is the lightest endurance frame the company has made, even with the additional infrastructure needed to accommodate the disc brakes. Giant says a medium size frame with ISP weights 890.2 g. Even though designers and engineers added mounting tabs for disc brakes, which extend from the hollow carbon dropouts, they still managed to drop 50 g. Around the head and top of the down tube, all the cables go into one side; in one case, they double up on one hole. When a hole is made in the frame, the opening has to be reinforced, which adds weight. The arrangement of holes on the Defy allowed the team to save weight. Finally, a feature that runs through the top-three Defy models (Advanced SL, Advanced Pro and Advanced) is hydraulic disc brakes. Giant uses Shimanos R785; however, the 140-mm-diameter rotors are Giant’s patent, and made by TRP.

The feature of an endurance frame that seems to sit at odds to stiffness is compliance. You want some vertical compliance in frame to minimize the transmission of road vibrations to the rider. These high-frequency vibrations can wear you down on long rides. To manage these vibrations, the Defy borrows an innovation from the 2014 TCX, one of Giant’s cyclocross bikes. The D-Fuse seatpost, with its D-shape cross-section, debuted on the TCX. However, it was designed for the Defy. Swanson and his team wanted to see how the D-Fuse would perform in extreme riding conditions before they put it on the endurance machine. On the Defy Advanced SL, the D-Fuse is used with an integrated seatpost (ISP). Its shape allows for noticeable flex fore and aft, but almost no movement side to side. The seatstays of the Defy have a low angle, so they meet the seat tube below the top tube. This junction helps to dissipate road vibrations, which take the path of least resistance up a frame. On a frame with seatstays that meet the seat tube and top tube higher up, the vibrations are channelled mostly up the seatpost. On the Defy, they are diverted more to the top and seat tubes. Finally, there’s the front fork. Its beefy fork crown works to provide front-end stiffness, while its thinner, curved legs add to compliance.

To test the Advanced SL’s compliance, the Giant team took the frame to the Automotive Research and Test Centre (ARTC) in Taiwan. ARTC has been testing automotive and motorcycle parts for more than 20 years. The Giant group employed two International Organization for Standardization (ISO) tests, one that measured the amount of vibration transferred to the hands (ISO 5349, usually used for steering wheels and the front of motorcycles) and one that measured the amount of vibration transferred via the saddle (ISO 2631-5). The result was a figure in g-forces; the lower the number means the less waving that occurs at the top of the seatpost or head tube. (While g-forces are usually associated with the effect of a turning airplane on the human body, they can also express vibration amplitude.) The testers found the front-end compliance of the Defy Advanced SL was 0.318 G and the rear-end compliance was 0.573 G. While the they found other frames in the endurance category did have slightly better number in some areas, Swanson stresses that the Defy compliance comes solely from the design of the frame, not via any addition inserts or mechanical pivots.

“What does it bring to the table that’s is different from anything else?” Swanson asked rhetorically. “What I think it brought to the table was the first pure endurance bike on the market. There’s nothing funky. No gimmicks. It’s a purely engineered product.”