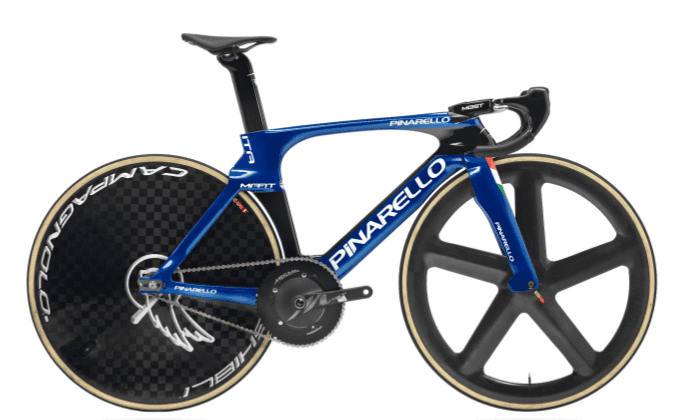 If you’re tuning in to the Hong Kong World Cup this weekend you may be among the first to glimpse the new Pinarello MAAT bike. The Italian team, which was involved in the development of the MAAT, will race the machine in the next installment of the UCI track World Cup series. 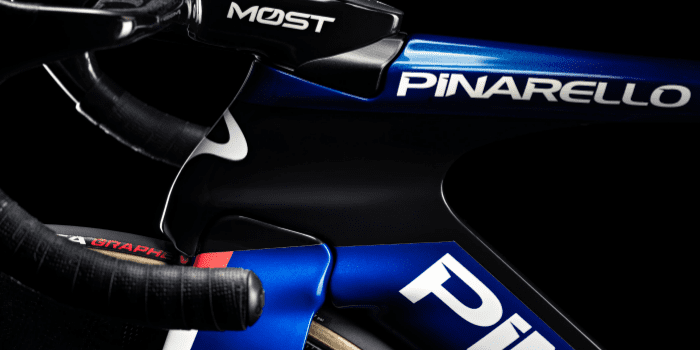 The most notable feature of the 1,350 g bike is the head tube, which extends in front of the fork crown. This configuration creates an aerodynamic profile in conjunction with the fork and down tube. Some time trial bikes have a similar design, with the head tube extended beyond the fork crown, but the MAAT has wider steering range than most allowing the bars and fork to rotate freely during possible crashes, potentially lessening the chance of catastrophic failure.

Although the UCI-approved bike was designed and created for madison and omnium events, its highlateral stiffness means it can also be used in the sprint races.With this bike, Pinarello continues to use the asymmetric frame design they’ve been known for since 2009. The enlarged frame tubes on the drive side (which counteract asymmetric forces) combined with the reinforced chainstays make for optimized power transfer.

Pinarello used rapid prototyping methods to test the integrated handlebars on the Pinarello MAAT. The result is a “new” time trial position, with ergonomic grips for hands and fingers on the top of the drops. They also included a reduced section near the stem for better control during the hand sling.

Other features of the MAAT include its aero seatpost,aero rear clamp and its Italian threaded bottom bracket (a Pinarello signature). Expect to catch this bike being used by the Italian national track team at the 2020 Olympics.