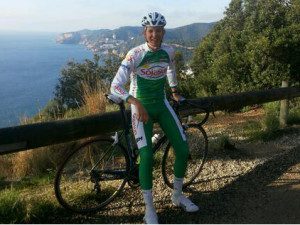 On Monday, Nigel Ellsay (Sojasun Espoir), a Canadian under-23 rider racing in France finished fifth overall at the Circuit du Mené. After placing himself in the breakaway on the final stage of the one-day, two-stage race, Ellsay was reeled in with 6 km to go. He managed to hold on and finish 16 seconds behind stage winner and overall leader Dylan Kowalski (Velo Club Rouen).

Ellsay, the 2012 under-19 men’s national champion had quite an Easter Monday. He also placed eigth in the prologue, 13 seconds behind the winner earlier in the day.

The Circuit du Mené is a prestigious French under-23 race. It is notably a race that has served as a stepping stone in the past for many top professionals. It is a part of the French Cycling Federation’s national series for under-23s. According to their website, there are 160 cyclists who have won in the professional ranks after racing in the Circuit du Mené in their years as an amateur.

Indeed, 2014 is proving to be an exciting period for Canada’s under-23 racers. With consistently high finishes coming from Sean Mackinnon and Benjamin Perry in Belgium, to have a third under-23 doing well in France is almost unprecedented for Canadian racers. Ellsay is yet another to live the dream across the pond, smoked salmon sandwiches and all.

No ham and cheese sandwiches at @SojasunEspoir . We roll on smoked salmon and philly cream cheese. #pickmeup #highrollers