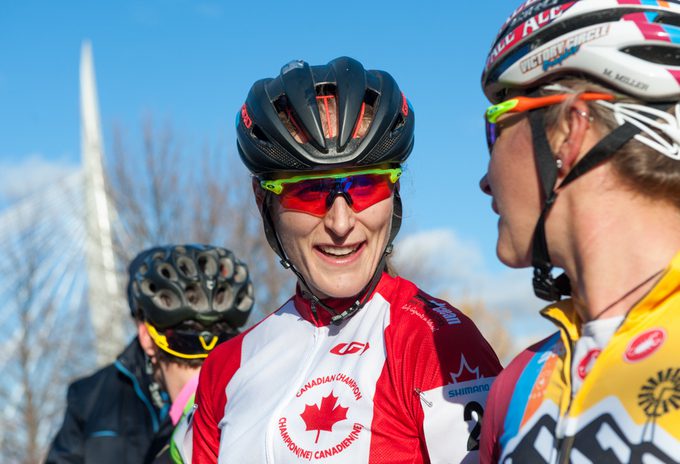 In the world of cyclocross, a name that’s appeared more often than not over the last season, you may have noticed, is that of Mical Dyck. First, it was the news that the British Columbia mountain biker and ‘cross specialist was embarking on the 2015-16 season as a privateer, supported by Naked Bicycles of Quadra Island, B.C. Then, of course, there was her commanding—and her second—title win at the national championships in Winnipeg.

It’s undoubtedly been a strong season for the 2015 national cyclocross champion. And if there’s any key problem or lesson she learned from it all, she said, speaking with Canadian Cycling Magazine, it’s that she tried to start things off too strong, too early.

“I started off the season with the World Cup in Vegas,” she recalled, looking back, “and going into it I realized I was walking that very fine line when you are really fit of being over-trained. There were some unexpected stresses and I found that I was really burnt out going into the start of the season. It took me a couple weekends of feeling really bad about my riding to realize that I needed more rest and not more intervals.”

On the other hand, of course, it’s hard to feel bad about a season that crowns a cyclist the top ‘cross rider in the land—and gives that rider some golden opportunities to compete overseas.

“Getting the opportunity to experience more European World Cups and the Kerstperiod racing in Belgium,” she said, “has been amazing.” As she looks ahead to the world championships on Jan. 30 and 31 in Zolder, Dyck has the advantage of experience on the all-but-unforgiving terrain of the European country’s courses. Knowing the difference between a Belgian and a Canadian ‘cross competition first-hand—something that’s surprised many Canuck riders, to say the least—is beyond valuable when preparing, she said.

Those differences, she explained, are enormous, and tend to involve a higher standard for competing cyclists.

“Racing in Belgium,” she said, “is a lot different than in North America, largely because the courses are generally pro courses only so they tend to be a lot more difficult technically and physically. Another big difference is the mud and the ruts on the course. Due to a lot of these courses being dedicated cyclocross courses year after year, some really good ruts form and they can be very tricky to ride in, especially when you’ve never had to deal with ruts before.”

On the human side of the competition, Dyck is expecting an unprecedented, strong field of challengers as she starts at the world championships. With some recent organizational changes in how the race is structured, 2016, she predicts, will be a lot different—even if the race itself isn’t as big.

“It will be a very interesting and great year for women’s cyclocross racing this year at worlds in Zolder,” she told Canadian Cycling Magazine, “because it’s the first year that the UCI is finally running a separate category and race of the U23 women. Because of this I think the Elite women’s race is going to be a little smaller than it has been in the past, but no less competitive as all the key players in the world are expected to line up.”

As for developing key Canadian riders, Dyck is encouraged by what she’s seen as the national ‘cross scene continues to pick up tempo. Still, she said, more can be done to make it even better.

“It’s been a long time coming and a lot of work, but we have some great people working hard to make the CX program in Canada better every year,” she said. “It’s still [an] unfortunately underfunded discipline, so everything comes out of pocket, which is really too bad because it such a fast-growing sport in North America. Just on Vancouver Island alone we have gotten almost 400 people to a single race!” But it’s not just the competing riders who need strong, world-class support, she says. In a big way, it’s those who provide some of the most basic support who need a bit of their own—and it’s for the betterment of the discipline itself.

“We have such a great group of amazing mechanics and staff that have donated a lot of time and hard work to help out just because they love the sport,” she said. “I mean, these guys aren’t getting paid and are working twelve-plus hours some days.”

Looking ahead after Zolder puts a cap on the season, Dyck plans for some down time. Then, she said, it’s back in the saddle with Stan’s No Tubes, and a summer of putting Canadian trails under her rubber.

“My plan is to take a good chunk of time off the bike,” she told Canadian Cycling Magazine. “I’m not burnt out at all right now, but I’m really excited to do some skiing, hiking, surfing and all the other adventures that I’ve missed out on this winter. I’m also in the hunt for a new job when I get home,” Dyck added, somewhat ruefully.

“I’m excited to be riding with the Stan’s No Tubes Women’s Elite team again this summer, and I’m looking forward to some fun mountain bike riding and racing again!”