Since retiring from professional cycling in 2016, or attempting to, Phil Gaimon has made a career out of remaining in the public eye. Now, according to a post shared with his 31.4k followers on Twitter, the U.S. cyclist is turning his back on the “worst retirement ever” and heading back to the WorldTour. This time with Team INEOS.

The online response to Gaimon’s selfie in an INEOS jersey was swift and confused. It led to some media outlets speculating whether his comeback was financially motivated, or all a hoax.

Unsurprisingly, the latter proved to be true. On Thursday, Gaimon announced he would also be joining the Chicago Cubs. Unless he’s shifting gears to stealing bases (or signs), it looks more like the American is rolling out his wardrobe than announcing a new employer.

Then again, maybe Gaimon is aiming to be a Renaissance athlete. He could be aiming to follow in the footsteps of multi-sport legends like Bo Jackson, Clara Hughes and, more recently, Kate O’Brien.

More likely, it’s a way for the social media athlete to drum up publicity before announcing a new sponsor for his YouTube channel or weekly podcast, The Peloton Brief. And it seems to have worked.

As Gaimon starts his new career in the baseball diamond, we’re looking back at 10 times the American grabbed headlines for his on, and off-bike antics. Some are funny, but they’re not all quick stunts like the Twitter post. Some have provided serious commentary on cycling or, like his three books, required serious effort on Gaimon’s part. That mixture of humor and substantial content is why the “Cookie Monster” has amassed 57.3k Instagram followers, 61.7k subscribers to his YouTube channel, and another 35.7k followers on Strava. Which is almost as much as a fledgling popstar. Impressive work for someone who spends most of his day in cookie-covered lycra.

In Gaimon’s third book, Draft Animals: Living the Pro Cycling Dream (Once in a While), he revisited the persistent rumor that Swiss cycling legend Fabian Cancellara had used a hidden motor to claim his wins at Paris-Roubaix and Tour of Flanders. Once published, Gaimon’s claims led the UCI to investigate, and Cancellara to respond with legal action. Both ended up in the headlines for months.

Gaimon’s motor-doping accusations against Cancellara, which the American continued to pursue, led to a very public feud between the two now-retired pros. The feud devolved from serious concerns over cheating to more entertaining boasting about who would win in a one-on-one bike race. Cancellara threw down the gauntlet first, challenging Gaimon to attend one of the Swiss rider’s Chasing Cancellara races. Calmer heads prevailed, the two retirees made up, and a friendly race was held, raising money for charity.

If there’s one theme that has been consistent in Gaimon’s retirement, it has to be cookies. He served one to Cancellara, he rates them online and wears them on his jersey. At the recently-canceled AMGEN Tour of California, Gaimon rallied fans at “Cookie Corner,” dressing as the cookie monster and handing out snacks to passing pros in the race. For his effort, Cookie Corner made national television on the live race broadcast.

After retiring from professional racing, Gaimon decided to use his residual fitness for more serious pursuits. Namely, Strava. After learning a amateur rider was allegedly doping, and taking popular Strava KOM’s via illicit fitness, Gaimon decided to make things right. He went on a mission to reclaim all KOM’s from this Strava villan and return them to a clean athlete. Our hero’s efforts resulted in much attention, and a YouTube series called Worst Retirement Ever. The series eventually broadened its horizons, becoming a way for Gaimon to travel to different cities showcasing the local cycling scene. And hunting for their KOM’s.

Gaimon’s YouTube series eventually brought him to Canada’s west coast. In his pursuit of KOM’s for each peak on Vancouver’s Triple Crown hill climb route, he ran afoul of the local Strava royalty. Several locals voiced their complaints, asserting it was unfair for a retired pro to go after times set by amateurs, unintentionally entrenching the cities reputation as the No-Fun-City of the cycling world. At this point, Gaimon had expanded the web-series to include a Best Retirement Ever segment. He, and his Vancouver hosts, had fun with the mini-controversy in the Best follow-up, and everyone calmed down a little. While this likely didn’t make waves outside the Great White North, or even Greater Vancouver, it did show Gaimon had a good sense of humor.

While documenting his attempt to return to racing, this time in the velodrome as part of an effort to make the US Track Cycling pursuit team, Gaimon crashed hard. At his first race back, in Trexlertown, Pennsylvania Gaimon hit the boards hard enough he ended up in hospital with a collapsed lung. Knowing he had health insurance, Gaimon used the attention from the crash to raise funds for his No Kids Hungry charity campaign. He encouraged fans to donate as if they were contributing towards covering health care costs of his recovery. He then donated all the funds raised to the charity.

Gaimon has since been denied coverage for the accident by his health care provider, leaving him on the hook for a reported USD $250,000. This attracted the attention of both Yahoo! Finance, which wrote a profile on the cyclist, and U.S. Senator Bernie Sanders, who commented on the affair on his Facebook page. 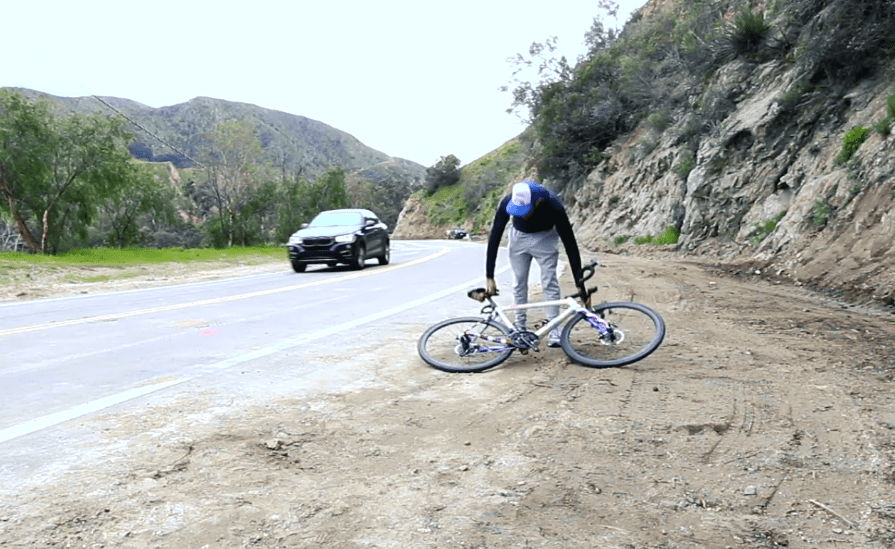 While recovering from his crash on the boards, Gaimon didn’t slow down. Saying his biggest fear isn’t crashing, but being hit by a car, he used his YouTube channel to call for more safety for riders on roadways. He also challenged the media to change the way they report on the death of cyclists. While more serious than a fake team announcement, Gaimon’s video is a sober, and much-needed challenge to standard media practice.

On the lighter side, Gaimon recently created a Strava account for his partner’s dog, Nala. The pooch’s path to fitness was cut short when the social fitness tracking site decided the furry buddy violated its terms of service.

This leads us to Gaimon’s Team INEOS / Chicago Cubs Twitter announcement. Of course it was a joke. If the Chicago Cubs post wasn’t clear enough for everyone (and apparently it wasn’t), he’s posted about returning the jersey. Which also wasn’t enough, so he’s clarified very clearly that it was a joke. I’m still hoping this somehow turns into him actually playing baseball, though, even if it’s just throwing the first pitch.