On Monday, May 11, Phil Gaimon set a new world record for the fastest ‘Everesting’ ride. He climbed 8,848 meters, the total elevation of Mt. Everest, in 7:52:12. The previous Everesting record was set in Australia by Tobias Lestrell in 2017. Lestrell finished his attempt in 8:46:11, more than 50 minutes longer than Gaimon’s new record.

That’s vomit in my beard but this suffering is a privilege. Thanks to everyone for donating to folks who suffer for real through @chefscycle @nokidhungry. Thanks to @theotherbenfoster and @emialv and @keltonwrites and @jessestewart2 @envincocyclevelodrome all the folks who came by to yell at us. Full story coming soon to Youtube

Gaimon is known for travelling around to collect local KOMs, so it’s no surprise that the 34-year-old would attempt a challenge such as Everesting. For this hefty ride, he took 61 trips up and down the steep Mountaingate Drive climb just outside of Beverly Hills, covering a total distance of 156.15 kilometres. The climb is 920m in long and averages a gradient of 11 per cent.

The Draft Animals author burned more than 8,000 calories while averaging 259 watts for the ride. He rode at an average speed of 19.4km/h and reached a maximum of 92.2km/h on the descents. 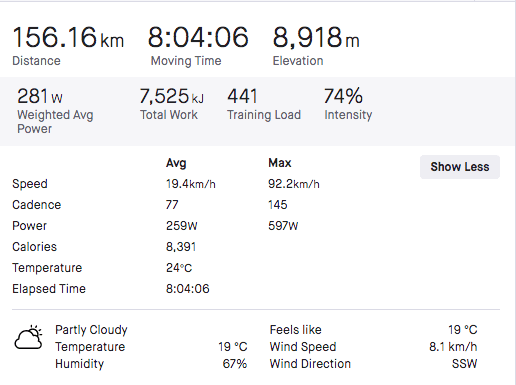 The entire event was done as a charity fundraiser. Gaimon pushed to raise funds for No Kid Hungry, a charity that works to combat child hunger in the States. As of May 12  he’s already raised $73,000 towards his goal of $100,000.

“There’s vomit in my beard but this suffering is a privilege,” said Gaimon’s Strava description of the ride. “Thanks to everyone for donating to folks who suffer for real. Thanks to Ben and Emily and Kelton and Jesse and all the folks who came to yell at me.”