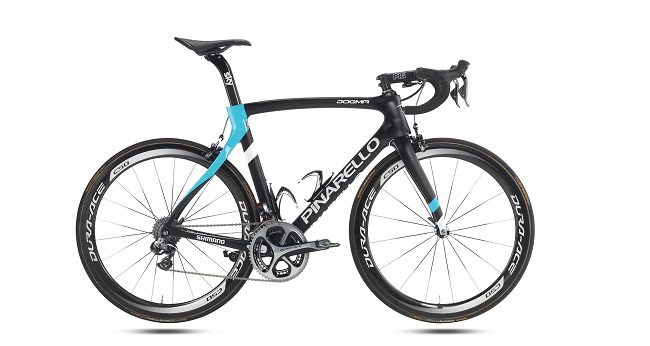 Since 2010, Team Sky’s website says, Pinarello has been the supplier of the squad’s fleet of rides, helping propel Chris Froome to victory at the 2015 Tour de France.

For 2016, Pinarello has introduced the newest steed to roll out with the top-ranked British team.

The bike, materials say, will resemble those used by the team in past years, bearing many of their more familiar characteristics. Painted matte black, it will look similar. It will also feature a Fizik saddle. The new Dogma F8 that the team will be riding next season, though, will be adorned with a striking blue and white line—the team’s colours—that will stand out even more, no doubt.

It’s the same smart, slick bike, Pinarello says, but with an aggressive edge for next year’s Sky riders. Officials with the British team are excited about the new bike’s possibilities. “The Pinarello Dogma F8 is an outstanding bike that performed very well for us in 2015,” said Carsten Jeppesen, Sky’s chief of technical operations. “We’re very proud to enter our seventh season with Pinarello next year and the new 2016 bike looks fantastic.”

“Three Tour de France [competitions] in six years, and a huge number of victories and podiums,” reflected Fausto Pinarello himself. “These results would be enough just to be proud of this team, but the union between Pinarello and Team Sky is much more. Two innovation-oriented companies, to achieve many more victories.”

For 2016, the Team Sky Dogma F8 uses the Shimano groupset and wheels, as well as Pro stem and handlebars, a Fizuk saddle and Elite bottle cages. For the general cycling public, the bike will be available starting from Feb. 2016 via authorized dealers.