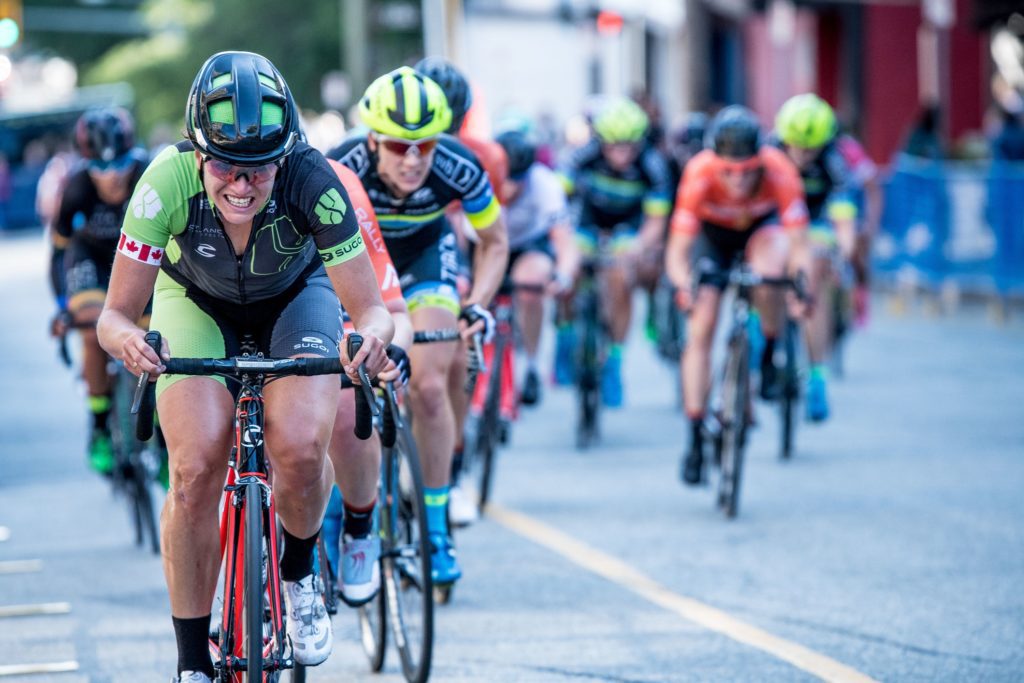 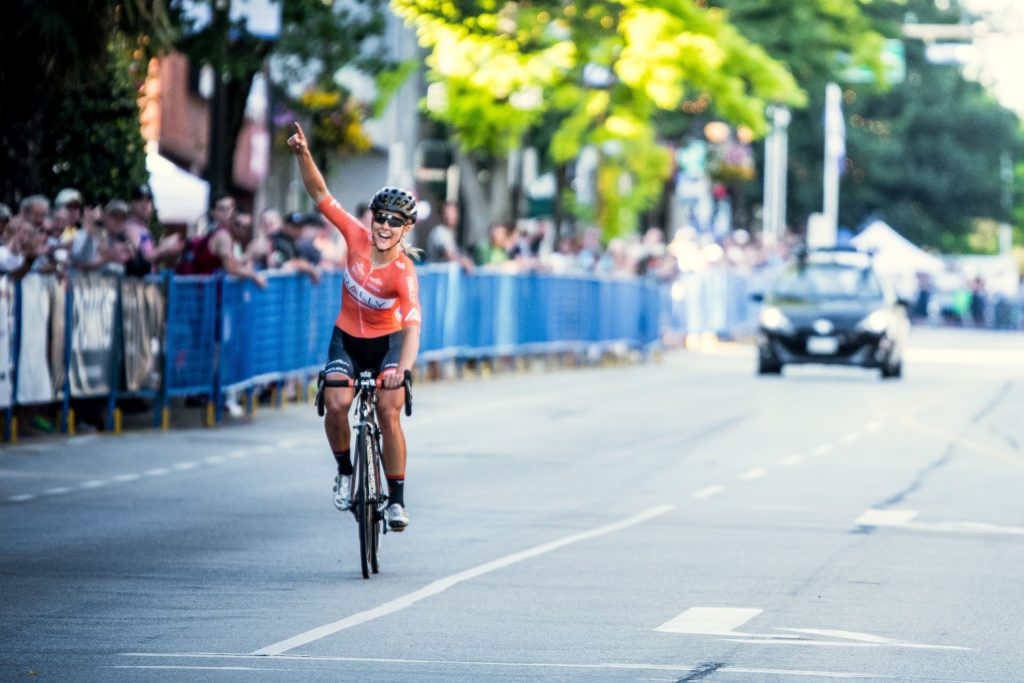 But it was Kristi Lay (Rally Cycling) who won the New West Grand Prix in convincing fashion with a solo breakaway. Photo: Scott Robarts 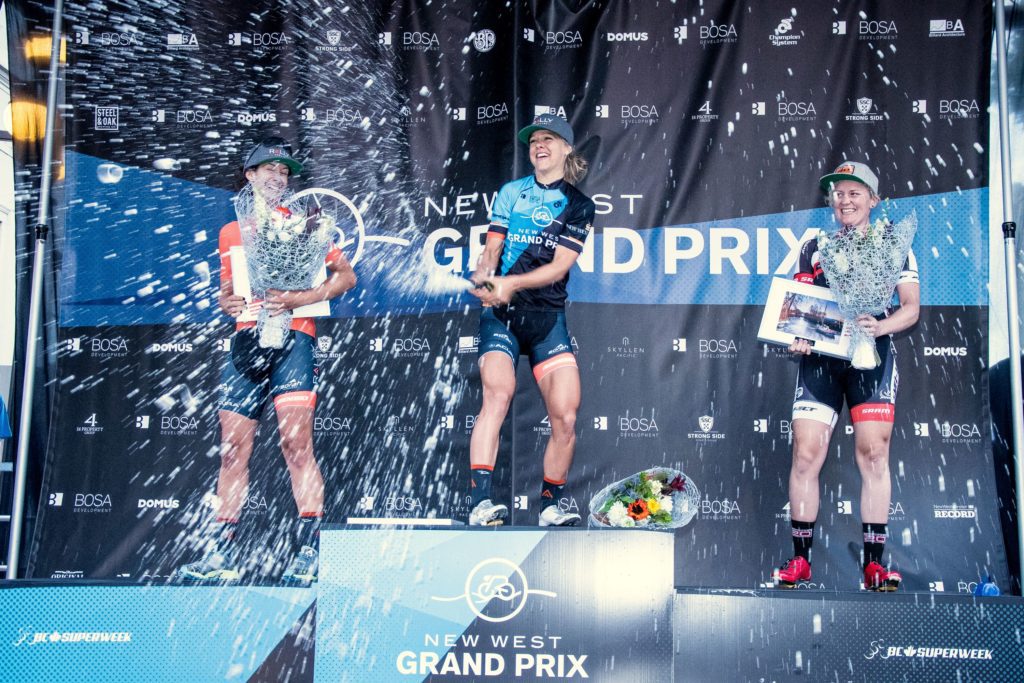 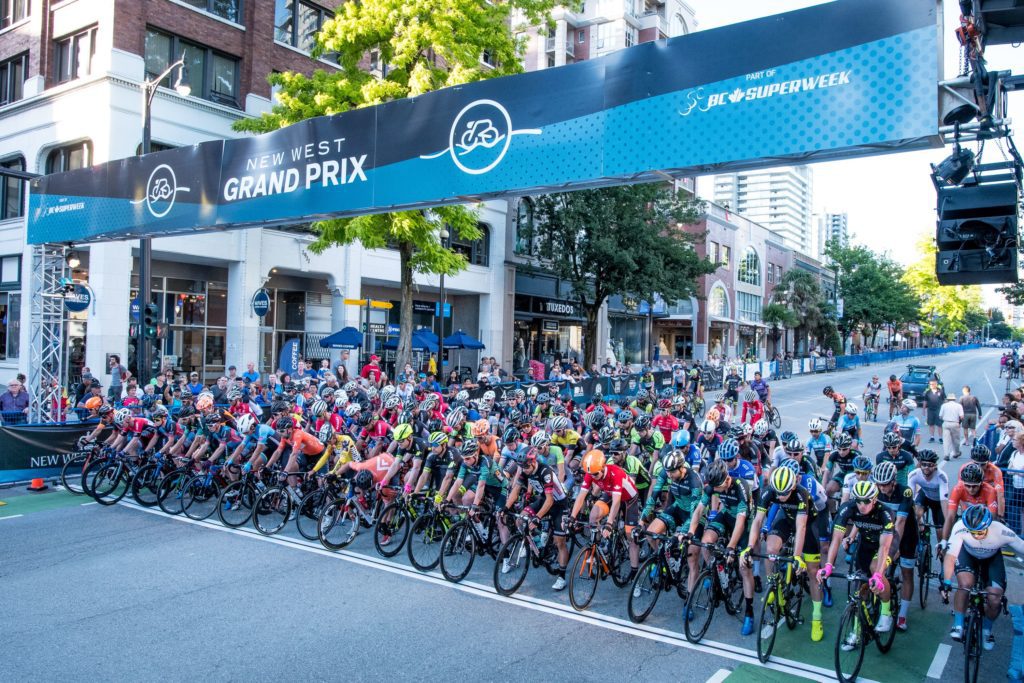 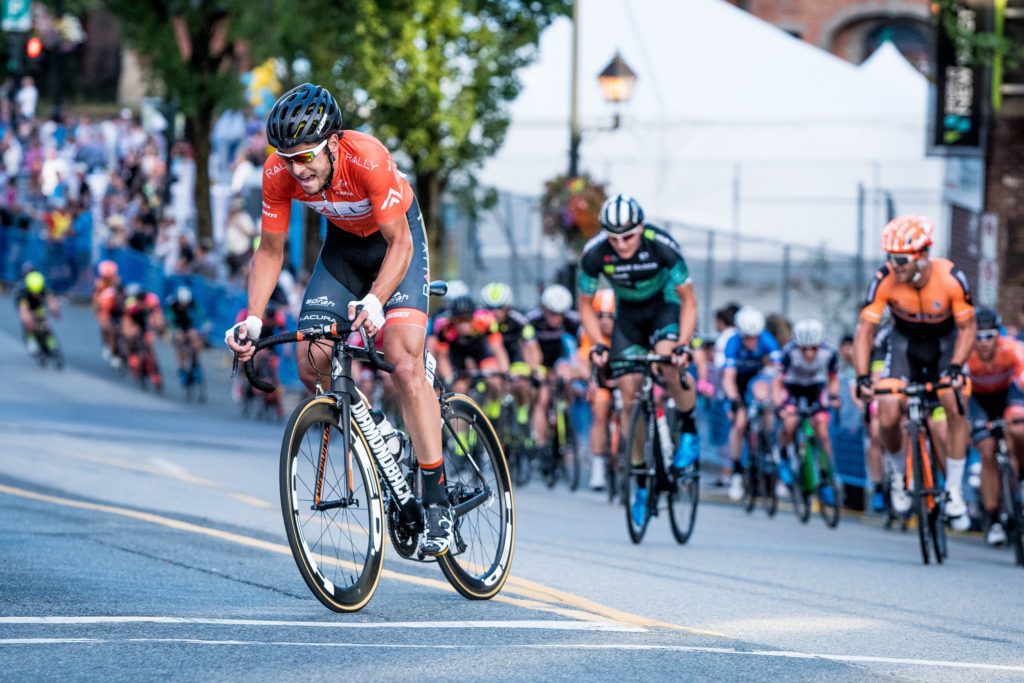 The pain of climbing the steep hills of New Westminster lap after lap is evident on the faces of the racers. Photo: Scott Robarts 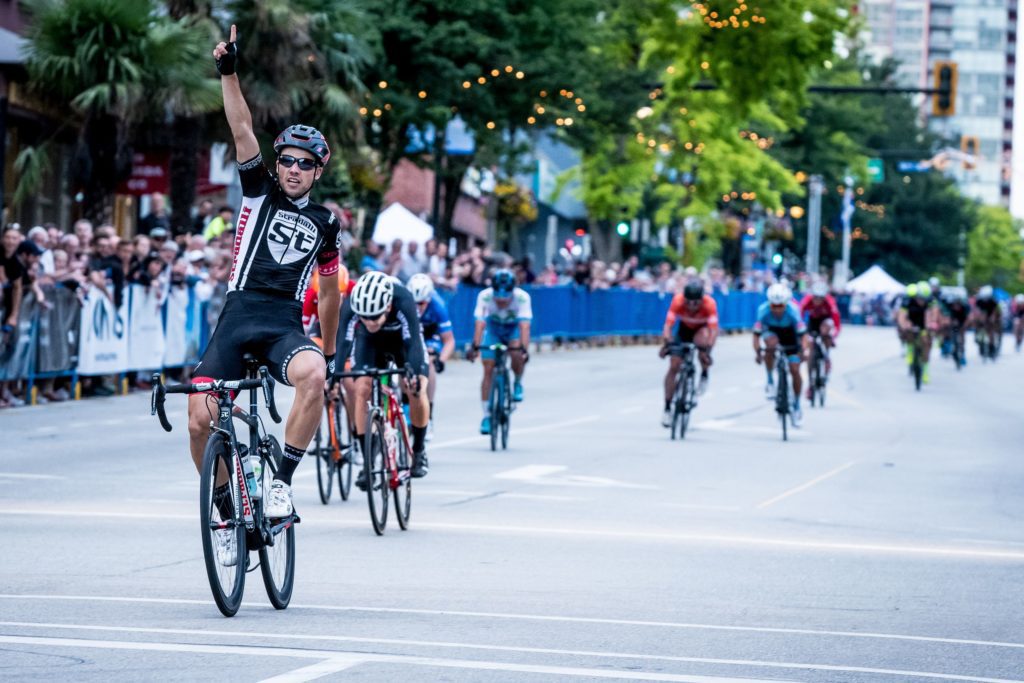 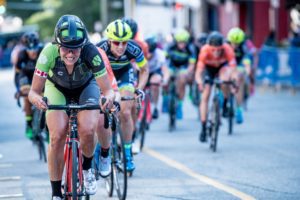 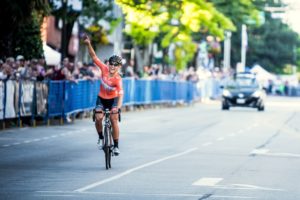 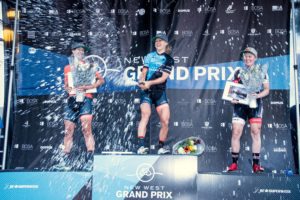 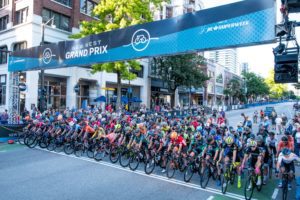 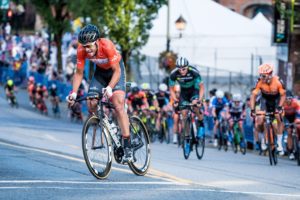 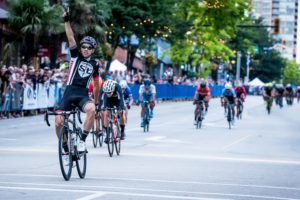 In 2012, German cyclist Florenz Knauer travelled to Canada for BC Superweek for the first time. He relied on host housing to make the trip possible and in time developed a relationship with the daughter of the women who ran the host housing program. On Tuesday, 28-year-old Knauer who moved to Metro Vancouver last year won the inaugural New West Grand Prix and following the win got on to the stage, told his story to the crowd and proposed to his girlfriend Alisha Lundgren.

“Actually, I had it planned for Gastown tomorrow but after the win today, I had to do it. Tomorrow I might have crashed or something,” an ecstatic Knauer said following his win. “I was more nervous for the podium presentation than the entire race. It kept me awake the last couple of days too, I was trying to sleep, but kept thinking about it. It’s a big step for me, but it’s definitely the right one and I’m glad she said yes.”

Knauer was 15th wheel going into the last turn of the 47.5 km men’s race. He attacked on the climb to overtake the field and sprinted to victory. Knauer already had a third place finish in his back pocket from Friday’s MK Delta Lands Criterium and the role BC Superweek has played in his life makes it a special event. “The series means a lot to me, I always have success here and it helped me meet Alisha. It means a lot,” he said.

No team in the men’s field was able to take a strangle hold of the race. “It was really hard. It’s just a small climb after the first corner, but in the end, you feel it a lot in the legs,” said 33-year-old Italian rider Davide Vigano (Team Cinelli Chrome) who finished second. “I took the climb a little bit in front when I saw the other guys attack (on the last lap), but I couldn’t follow because I didn’t have the speed. I just waited a little bit too much.”

19-year-old Campbell Steward (Cycling New Zealand) finished third. The four-time track world champion said after the race that his experience on the boards helped him secure a position on the podium. “It’s powerful out there, we’re doing a lot of power work and that’s mainly the part of the track, so everybody goes pretty good in those types of climbs,” he said. “The speed is really fast coming into the last corner, it’s pretty hard to get around it, and I just kind of went full speed to the finish.”

The women raced the course at a furious pace. Of the 61 starters, only 18 finished the 38 km event. Olympic bronze medalist Kirsti Lay once again imposed herself with a powerful solo move she launched mid-way into the race. Like at the MK Delta Lands Criterium, she won solo with her strong Rally team in the pack covering moves.

“It was a great race, my teammates set me up perfectly to take off and countered at the right time,” explained Lay. “Everyone else was a little gassed, so it’s just nice to know that they were behind me and ready to go at any moment.”

The face that says it all 🏆🥇 pic.twitter.com/AHvrryjnX0

She explained the challenges of the course and why they favoured the success of her solo move. “There’s not much relief out there, the downhill is pretty short and then you’re in the headwind coming down (to the start/finish), so you still have to work,” said the Montreal-native. “It’s a great course, it’s a little bit of attrition out there and that’s what makes it fun and exciting.”

Thanks #NewWestGrandPrix and all the amazing locals who volunteer. What an awesome race #BCsuperweek 🙌😍 pic.twitter.com/umjgtwc0Ge

The next race on the BC Superweek menu is the Global Relay Gastown Grand Prix on Wednesday which boasts a $12,000 prize for the winner. When asked if she’ll be gunning for a third win at Gastown she answered with an emphatic, “Oh yeah!” The women’s race goes off at 6:15 pm with the men racing at 7:30 pm.