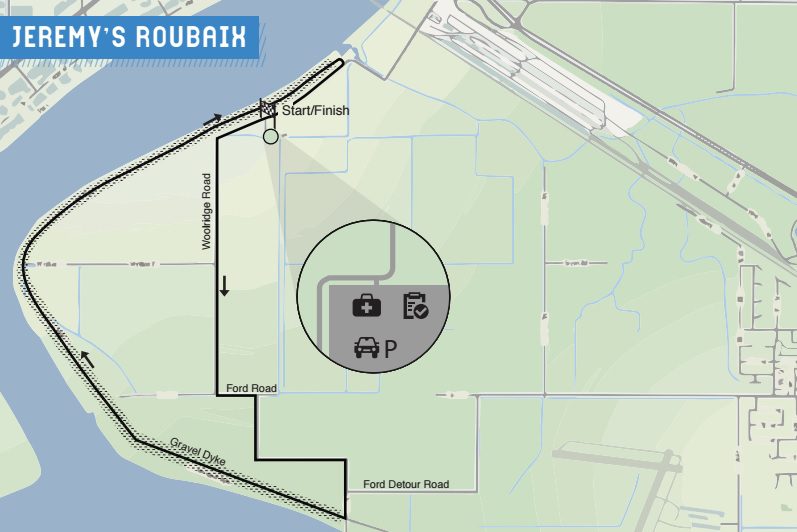 On April 10, Jeremy’s Roubaix, the first race of the Cycling BC Premier Road series calendar, kicks off in Pitt Meadows, British Columbia. Drawing its inspiration from the Paris Roubaix, the Lower Mainland event takes advantage of local gravel in place of the original’s cobblestone, throwing more than a few challenges at competing riders.

As announced recently on the Cycling BC website, registration for the 2016 edition of the race is now open.

The Pitt Meadows-based event, presented by Local Ride, has been a highlight of the west coast road scene for the last 13 years, originally rolling out under a different name: the Harris Roubaix. Its current name honours British Columbia road and track legend Jeremy Storie, mentor to prestigious Canadian talent like Steph Roorda, Jasmin Glaesser and Laura Brown, and a man whose legacy includes the development of young talent and advocacy for greater gender equity in cycling.

Storie passed away in February 2013.

Ranging 10 kilometers through the Pitt Meadows area, the course of Jeremy’s Roubaix includes approximately five kilometers of rural road along the scenic Pitt Meadows dyke network. From the start, riders proceed south down Woolridge Road to Ford Road, then embark on a long, waterfront gravel route along the Fraser River. The women’s and men’s category 1/2 race, the toughest of the competing classifications, follows the route for a total of 73 kilometers—eight laps in all.

Those interested in registering for the 2016 race can do so online, as well as find further information about the details of race day on April 10. Proceeds from this year’s race will help Maggie Coles-Lyster, another of Jeremy Storie’s proteges, realize her World Championship ambitions this year.

Early registration pricing ends on March 15, while registration itself closes on the evening of Friday, April 8.. More information can be found at localride.ca