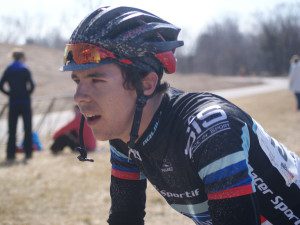 On April 6, a rider blasted off the front of the elite men’s field at the Tour of Bronte and rode away to a dominating solo win. It was first-year U23 rider Sean Mackinnon of Racer Sportif/Mattamy Homes. The 18-year-old is a student at McMaster University and has eyes on the professional peloton. “I have found it difficult to find a balance with school and cycling but I think the biggest thing for me is staying connected with family and friends,” said Mackinnon, who is currently in Belgium racing in a series of national and local events.

Mackinnon’s journey to the heartland of cycling was not straightforward. Mackinnon was selected to the Canadian National Men’s Track Endurance Program earlier this year. Not only was the project not entirely funded, he was also forced to negotiate a way to reschedule his exams to June. This is no easy task given the nature of university bureaucracies. Nevertheless, Mackinnon is taking full advantage, first travelling to Belgium , then to California to train on the LA Velodrome and finish with a training camp in Malibu.

Mackinnon has certainly been thrown among the wolves in Belgium, learning first hand that even the local races have great importance. They’re relentlessly fast and extremely competitive. He flatted 60km into his first 120km kermesse in Belgium. ( A kermesse is a circuit race where the loop is longer than a criterium. Typically criteriums are more prevalent in Holland, while kermesses form the backbone of local racing in Belgium). In the longer kermesses, getting a flat tire is a major setback because there is no caravan following or free laps granted. The speeds are ruthless and Mackinnon was out of his first race only half-way through. Chasing back from a standing start is an impossible solo effort.

In his second race a day later, Mackinnon found his legs in a break-away of four, 20km into the race. He fought the tactics of U23 riders competing for the feeder teams of World Tour juggernauts, Omega Pharma-Quickstep and Lotto-Belisol. Although he wasn’t able to beat them in the end – he raced valiantly, attacking in the final kilometre to be caught a few hundred metres before the line to finish fifth.

Mackinnon is currently continuing his three-week stint in Belgium. His results are impressive and he will undoubtedly be a Canadian to watch in the future. It’s fantastic to see a young rider who is able to go to University and have success in Europe.