.@metromorning #visionzero why do I have to strap on a pool noodle to force people driving cars pass me at a safe distance? @biketo pic.twitter.com/6a2LsH9y2N

If you commute by bicycle you may have experienced it, the jarring realization you just came within inches of being taken out by a passing vehicle who did not afford you the enough space. You wear a helmet, obey the rules of the road, when you commute at night you turn your lights on and you wear reflective clothing but still there are more close calls than you can count. Well one man in Toronto has taken matters into his own hands, installing a pool noodle to keep passing drivers at bay.

Warren Huska lives near the Beaches east of downtown Toronto and commutes 18 kilometers to his office in North York. After years of tough commutes filled with close calls, Huska says that a simple pool noodle attached to his bike has resulted in passing drivers giving him more space.

“People get really insulated inside a vehicle,” Huska said to the Toronto Star. “They don’t really know where the edges of their vehicle are.”

Attached to his bike by bungee cords, the foam cylinder helps drivers remember to give him more space. In Ontario, by law, drivers are required to leave one meter when passing cyclists. He started riding with the noodle in mid-2015 and says that drivers better judge a safe passing distance now resulting in fewer close calls.

“The edge of the noodle (helps them) gauge space instead of them trying to judge where my elbow was,” said Huska. The change has been drastic. “Suddenly all the cars are changing lanes to go around me.”

Estimating he rides 8,000 km throughout the year, in all seasons, the noodle has been a constant companion. A noodle is a simple safety measure, that may look silly but Huska stands by it saying it’s effects on his safety have been “almost magical.” He said he has only seen one other rider with their own noodle.
.
“I’m unconcerned about looking good,” Huska said. “I’m concerned about my safety most.” 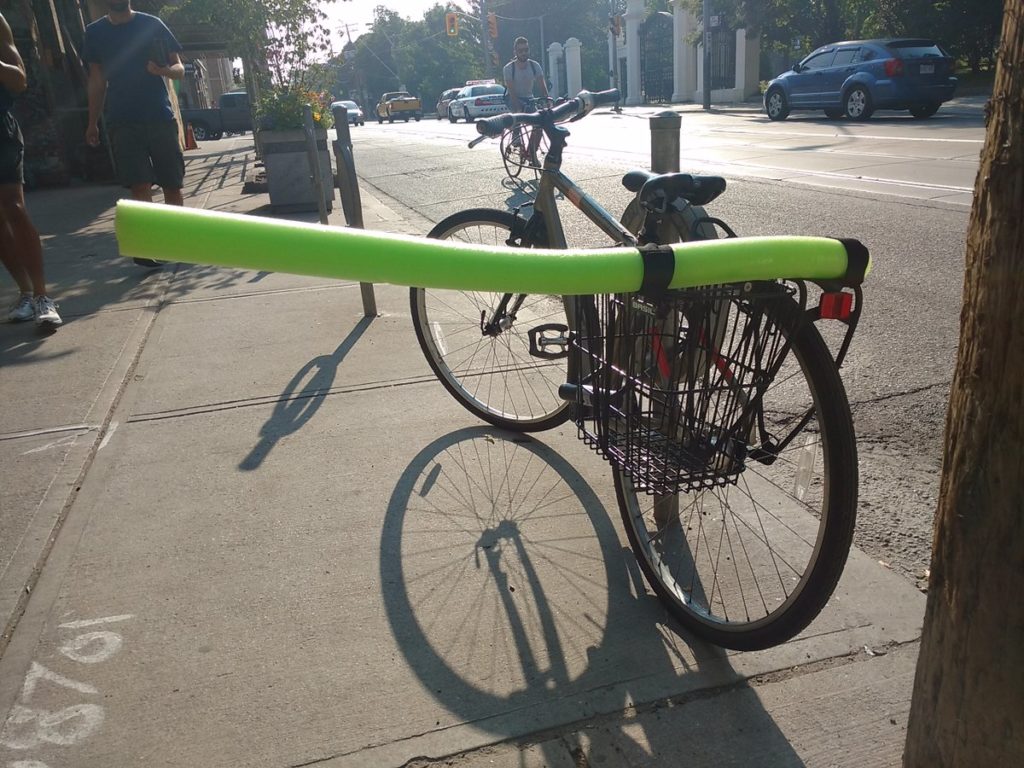 In a city in which Toronto police say 862 reported collisions between cars and bikes have taken place between Jan. 1 and Sept. 30 it is reasonable to get creative in order to stay safe.