Known for their progressive research and design, Sugoi has brought a variety of concepts to the market. The first big step in Sugoi history was the launch of the RS (Racing Systems) collection, which was shortly followed by the introduction of pit-stop technology throughout their women’s collection and, most recently, the development of the explosively reflective Zap Technology. 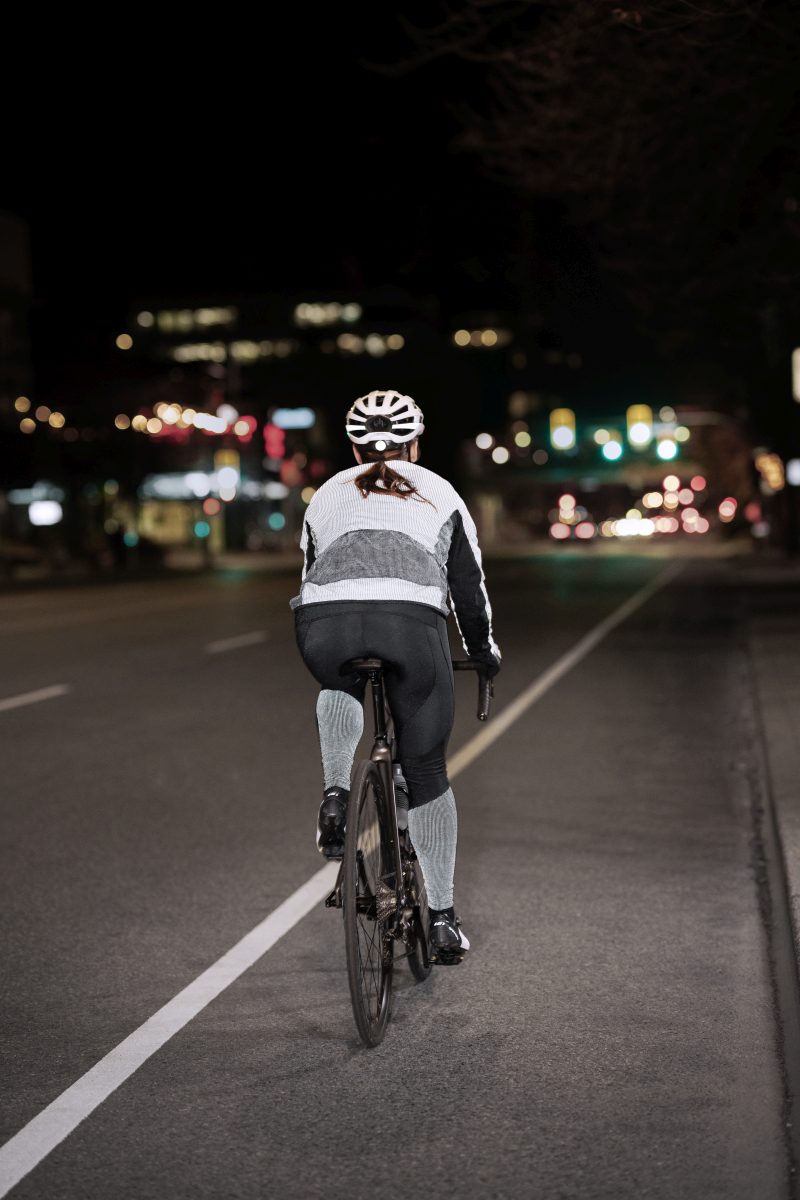 One of the biggest barriers cyclists encounter when riding through the dark winter months is low visibility. Sugoi’s Zap Technology—also known as Zap Tech—offers the visibility and confidence to stay active all year round. The technology itself is manufactured by Canadian brand Sugoi, vigorously tested on a wide variety of materials and then applied to a range of cycling clothing.

Sugoi didn’t create the award winning Zap Tech that they are so well known for; the technology was invented in the reflective industry. The designer approached Sugoi and “it was a perfect match in size and in the way we were looking at product,” says Richard Fournier, who has led in the development of Zap Technology and its application to a wide range of Sugoi garments since joining the brand. Fournier boasts over 25 years of experience in garment production management and has adapted the technology and applied it to their fabrics in manners specific to outdoor sport visibility.

Measuring 100 yards long, the machine used to create Zap Tech material contains rolls of fabric for each stage of the production process. It’s enormous size is necessary, as the Zap Tech is applied all within the same machine. 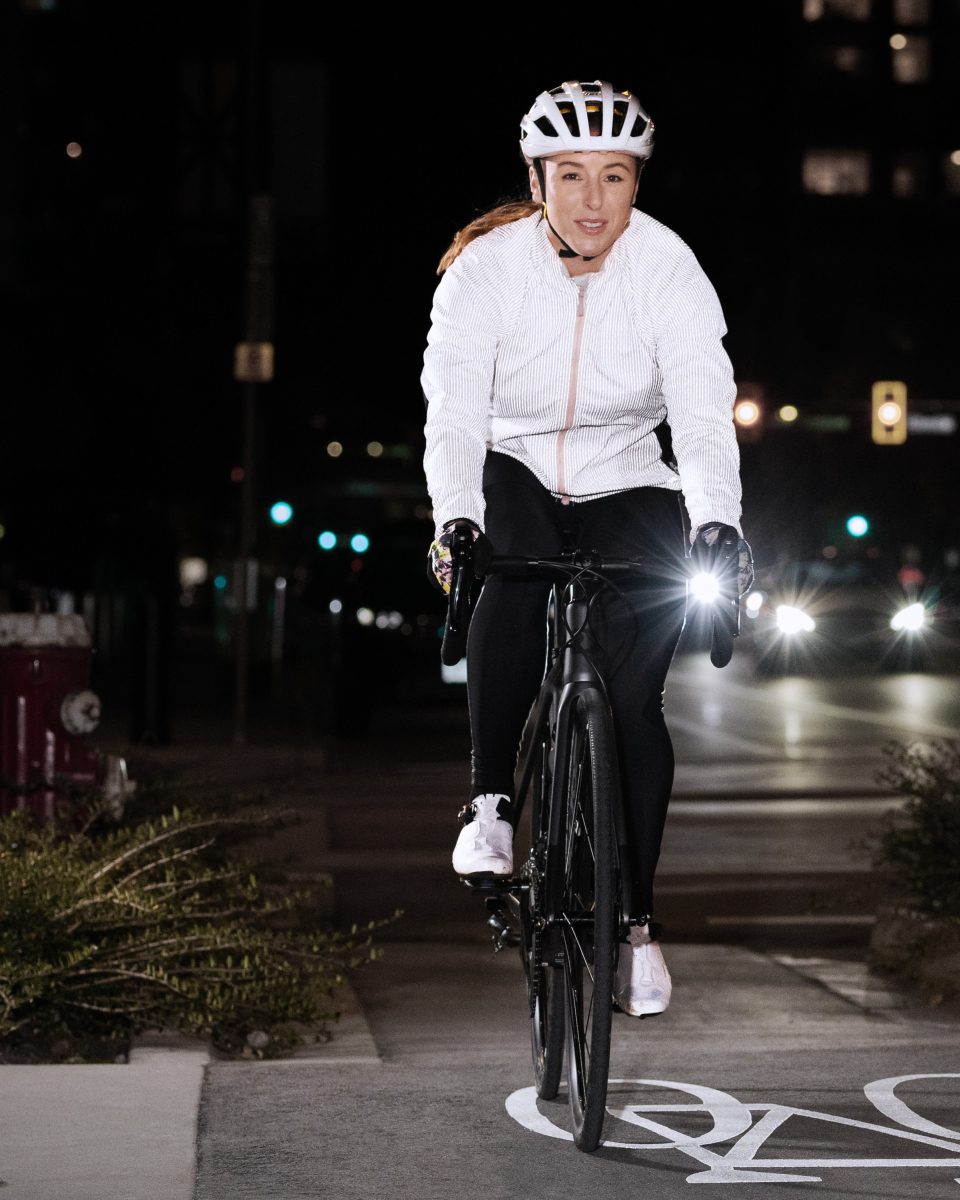 While it’s the reflective material behind the glass that actually reflects, the glass beads allow the fabric to reflect at every different angle, which, according to Richard Fournier, gives it a bigger “pop”. “The videos you see on Youtube aren’t a trick,” he says reassuringly.

A focus on safety

Moving at 50 km/h, a driver needs 140 feet to react to a cyclist riding at night. Anything less and the chance of impact is high. According to Fournier, for increased visibility, tests indicate that nothing can beat full reflective gear.

Studies suggest that creating an illuminated human silhouette increases the safety of a rider, as it increases the emotional impact on the driver. Even at 140 feet, the small, circular dot of a rear light, will not have the same impact as a moving human silhouette. Reflective items, therefore, are more effective when they cover the entire body, an achievable look with items from the Zap Tech range. which offers a series of items that provide 100 per cent coverage.

For items that are not completely covered in Zap Tech, Sugoi conducts tests to determine which areas are the most important for visibility. The designers play with the application and garment design to minimize the coverage but maximize the safety effect.

Through testing, Sugoi found that shoe covers are particularly impactful to help cars identify cyclists. The up and down movement of the feet is immediately recognizable as a pedaling motion, especially when combined with Zap Tech on the helmet cover and the rear pockets of the jersey. 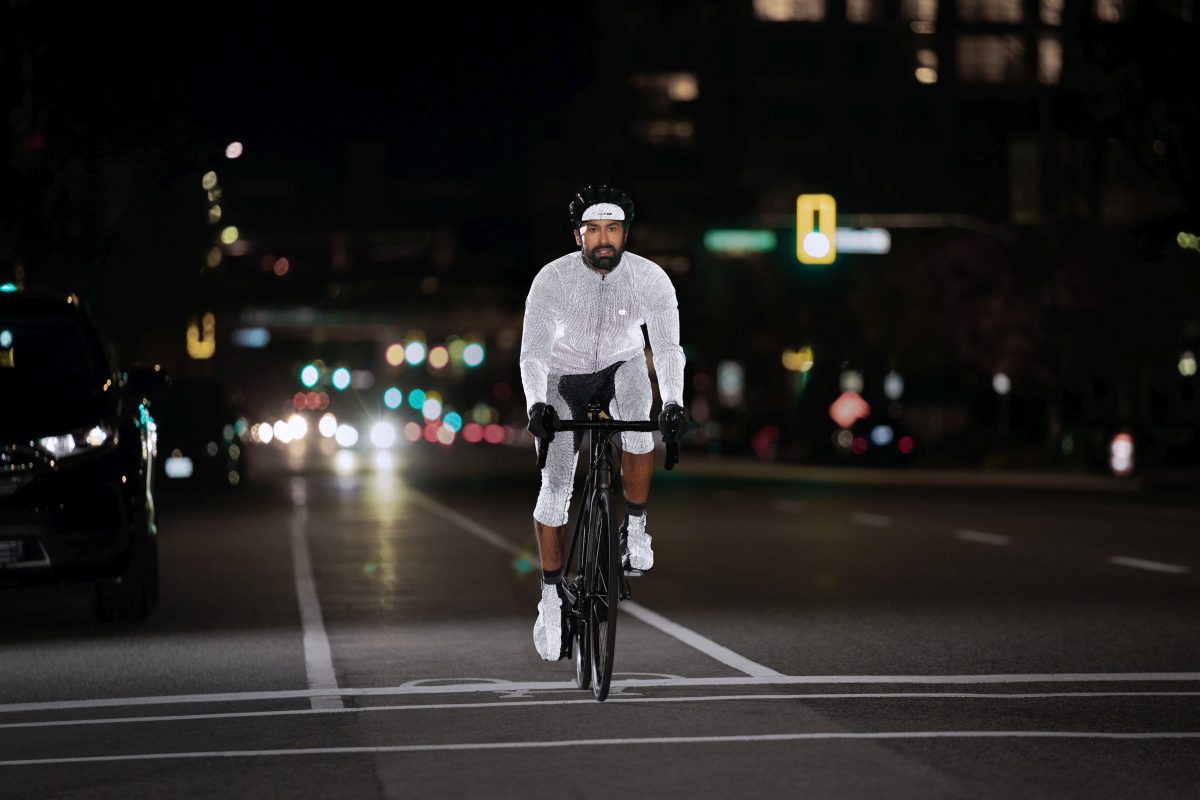 Moving from the reflective industry to the sports world posed a few challenges. First, Sugoi had to figure out how to apply Zap Tech to their technical materials and the stretchy Mid Zero fabric that they frequently use for tights. Applying Zap Tech to the water resistant fabric that is used throughout their rainwear collection proved to be the most challenging, but through repeated testing they’ve been able to achieve it.

As a result of relentless testing, Sugoi also developed a new, improved, Mid Zero fabric that offers a greater stretch and is lighter in weight. “There was no standardized test for the new fabric,” Fournier explains. “You could tell as soon as it came out of the machine whether it had maintained the stretch, feel, weight and so on and could be considered the same as or even close to the original mid-zero fabric.” 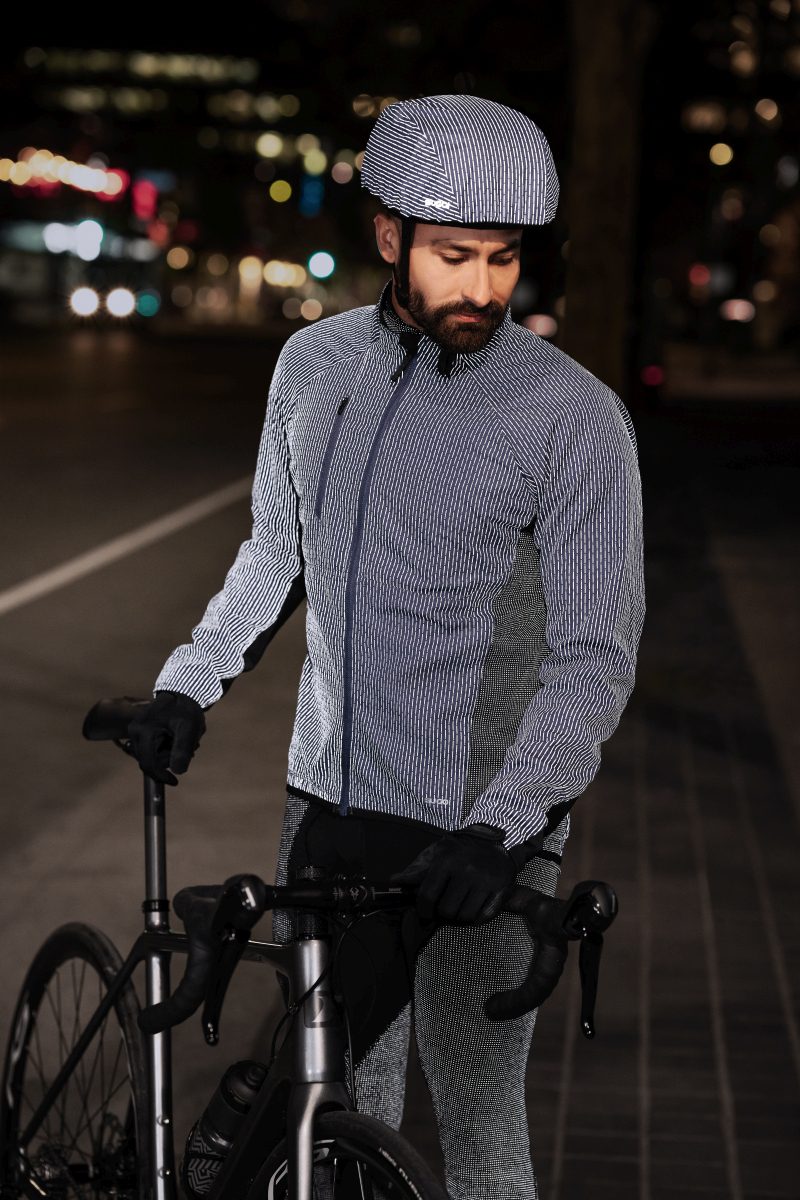 “With Sugoi, performance is a priority,” Fournier asserts. “There has to be a reason for a garment, they do not launch product for the sake of launching product, it needs to have a purpose. Unless there is a purpose, it’s just another jacket, and there are plenty of jackets already!”

Once they have a garment they are happy with, designers draw on the cyclists in the office for feedback and any final tweaks before finally going to market.

Sugoi continues to develop the technology together with the fabrics simultaneously, namely maintaining the lightweight characteristics, the breathability, and the stretch without limiting the technological leaps they have made in other areas. Fournier refers to the advances that have been made with the lightweight fabric they are currently working on as an example. Still not 100% happy with the final product they do not feel pressured into going to market prematurely.

The intersection of technology and fashion

First launched in 2014, Zap Tech wasn’t the quality that it is today, says Fournier. The original dot application was extended to a line and dot in 2018, a pattern that represents the ‘i’ in Sugoi. The change was purely for esthetic reasons, to enhance the colour of the fabric. 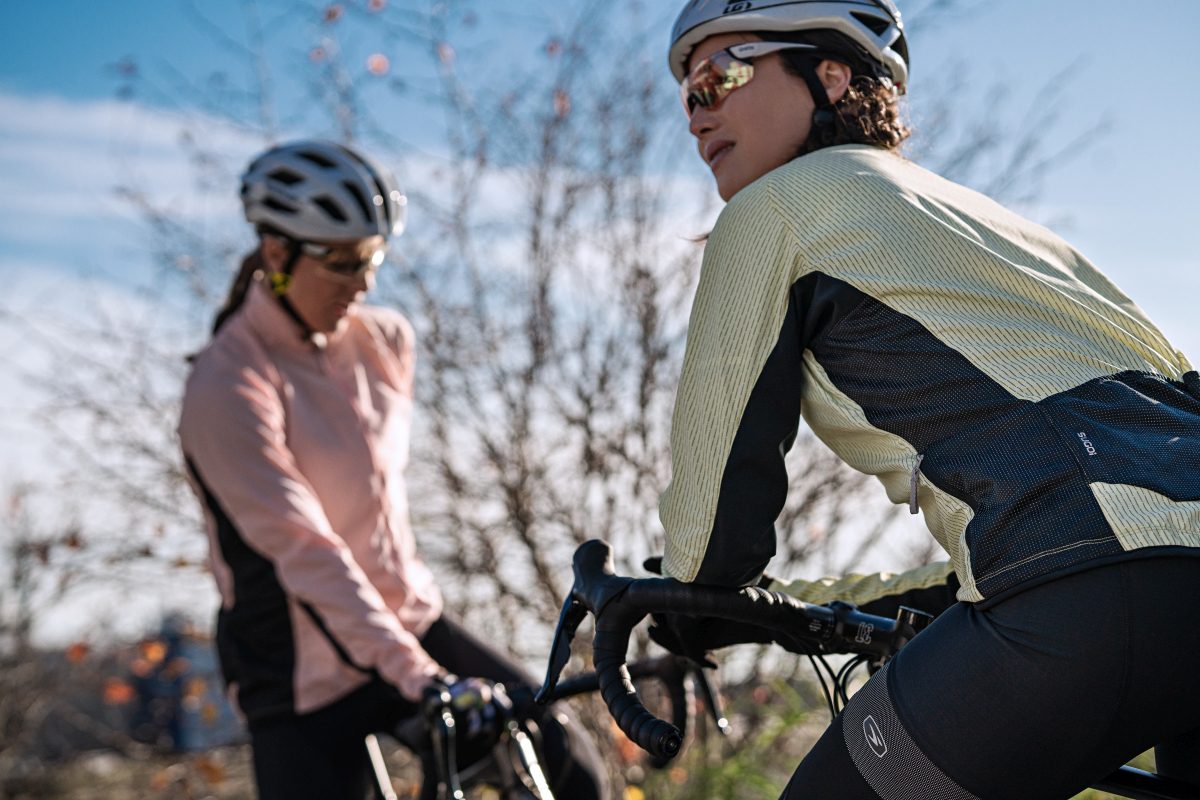 Although the company is safety focused, Sugoi doesn’t skimp on good looks. The success of the garment is greatly reduced when the aesthetics are compromised, as, quite simply, people won’t wear it.

Having played with various colours of reflective materials, Sugoi found silver was the most effective. Surprisingly, the background colour of the material had little to no effect on the relative reflectivity and so opened the door to a variety of colours and patterns.

The recent union between the two brands Garneau and Sugoi gave way to fresh eyes and a new direction that prompted more recent designs within the womens’ Sugoi range. As of 2020 Sugoi will be extending the range to include beautiful floral designs inspired by the RS Pro collections. This will add variety and character, avoiding the garish colours that are commonly associated with safe cycling materials.

“It is a form of expression,” Caroline Marois, apparel director explains. “We can expect to see more of this from Sugoi. The design was sparked with the notion of being able to express ourselves, without being cornered into the pinky and girly that has often been identified with women’s sport. The ability to stand for ourselves and be proud of what we wear and be able to wear it with confidence and go ride.”

What’s next for Sugoi?

It goes without saying that Safety is the priority for Zap Tech garments; While reflectivity might take a back seat on race day, it is essential for those training and perfect for those travelling to and from work in the darker hours. Experts seem to agree, as Zap Tech won the Eurobike Award in 2014 and again in 2016.

The position of the Zap Tech material has been thoroughly tested, has proven successful, and so currently needs no further development. Instead, Hugues Lapointe, the cycling soft goods product manager, and Fournier will work closely to direct their research towards new materials, to optimize the application and durability of Zap Tech, enhancing other qualities of the material along the way.

The lightweight breathable stretch that they have been working on for 18 months probably won’t hit the stores until 2022 when the team is 100 percent happy with the final product. “Any negative effects on existing technical features would kill everything,” says Fournier, “and we’ll skip another season and we’ll get it right. Standards are high for Sugoi and we stick to them, a garment is not ready to be launched until the balance between the statistical analysis and look and feel has been optimized. Performance is a priority.” 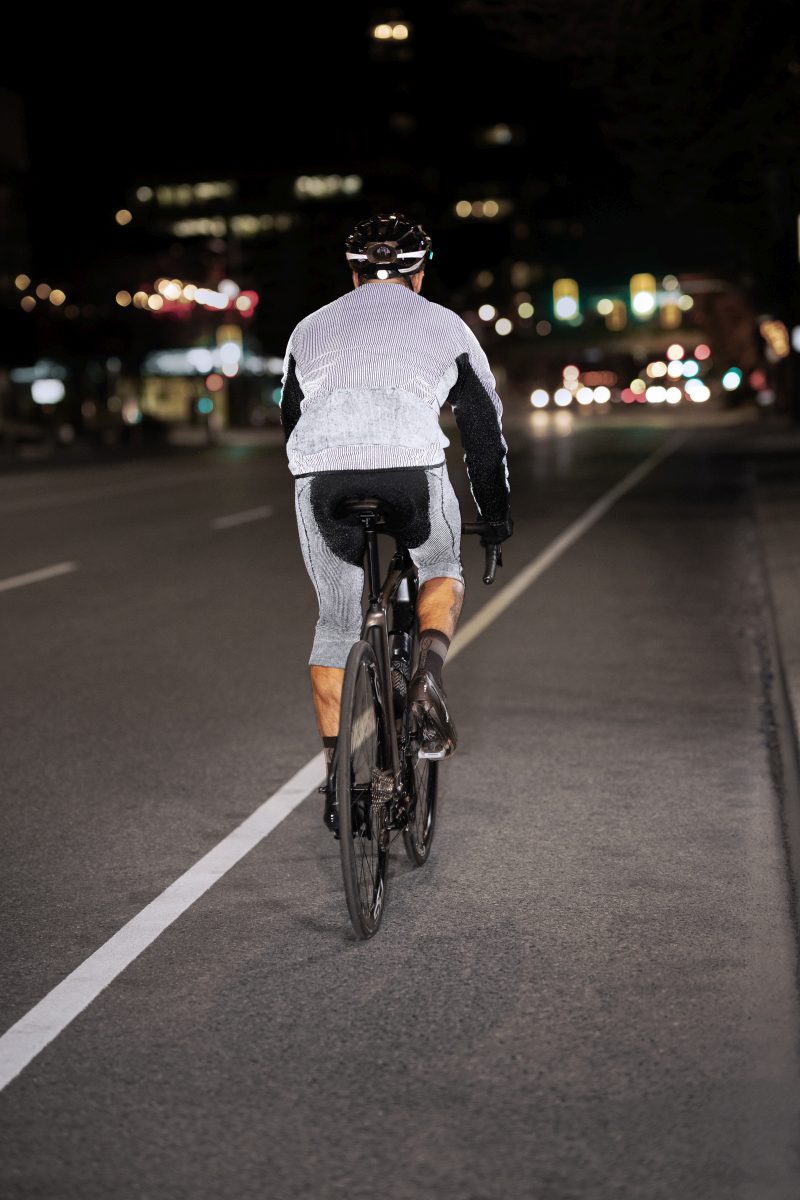 Moving forward, Sugoi also plans to launch the Essence Collection, a more affordable jersey and shorts combo for “Monsieur, Madame tout le monde,” Marois states, with a quintessential Québécoise accent. The Essence Collection boasts a great quality of fabric and a high end chamois at an affordable price-point, and if the initial range is as successful as Sugoi hope it will be, we can expect to see the collection grow over time.

Sugoi’s male and female collections are no longer identical, as they once were. “The technological requirements are the same,” Marois explains, “But the shape and the placement of certain features are different.” For example, the mesh placement is specific to men and women, given that men tend to sweat more and in different areas.

Sugoi have also factored in bras and a wider waistband for additional comfort and support. The designs offer a wider finish on the legs and arms to avoid the dreaded sausage effect, based on feedback from female cyclists.

Pit stop technology has become the standard for all women’s bibs at Sugoi, so much so that Marois doesn’t even consider it a notable factor anymore. “Let’s move beyond this conversation,” says Marois. “Let’s talk about the two to four hours you are riding the bike, and not focus on the two mins you aren’t.”

“For fall 2020 Sugoi will have a huge focus on women with new styles and bold but feminine prints that aim to inspire confidence,” says Marois, “Finding something to wear won’t be a problem but choosing between the options, well, that’s another matter!”