The Canadian para-cycling team had been training hard at the Mattamy National Cycling Centre all winter. With Para-Worlds falling the weekend after the UCI World Cup, the team were forced to fine tune their race form on a different track, finishing up their Worlds training in California. They’ve now returned to Milton, a few days prior to the competition, ready to represent Canada in the 2020 UCI Para-cycling Track World Championships.

Tristen Chernove, from Cranbrook, BC, races in the C2 category. He is the defending scratch race World Champion and will be looking to cement his status in the event.

How long have you been riding?
I started riding when I was around four, I remember getting my first bike for my birthday and my dad taking me down to the park to learn how to ride. He strapped the bike into the bed of the pick-up truck, and he let me sit on the bike in the bed of the truck all the way to the park, probably something you couldn’t get away with today. I started racing competitively when I was diagnosed with Charcot-Marie-Tooth disease. As an able bodied athlete, I competed in paddle sport. I was especially interested in keeping my legs moving and I wanted to fall from the highest peak I could with regards to my disease progressing. I started riding in 2010-2011 and have been racing competitively since 2015.

Where is your favourite place to train?
Summer – Cranbrook, BC.
Winter – Spain, racing in Italy is amazing as well.

Best pre-race meal?
A bowl of cereal, I just love it!

What are you most excited about for the upcoming championships?
Trying to exercise, controlling my anxiety, getting the first race started and behind me. I am still working on managing my pre-race routine. Things will begin to fall into place as the weekend progresses.

What songs get you in the zone when you’re warming up?
I use Spotify, I look for Indie-Rock mixes, anything positive and upbeat. I like keeping the music new and avoid getting caught up in listening to the same thing over and over.

Ross Wilson, from Sherwood Park, AB, will be racing in the C1 category in the endurance events.

Where is your favourite place to train?
For track I love racing at the Burnaby Velodrome, for road I love Jasper National Park.

What are you most excited about for the upcoming championships?
Honestly, it’s the first time I’ll get to race in front of my family on home soil. In 2015 I crashed out of the Pan Ams and missed that opportunity, so it’s a chance for my extended family to see, as one of my uncles put it, “If I’m any good at this cycling thing”. I’m also excited for the scratch race, I want a chance to make the race hard.

What songs get you in the zone when you’re warming up?
I’ll be listening to DragonForce in my warmup, science has proven that power metal is essential.

RELATED: What you need to know about the 2020 Milton Para-Cycling Track World Championships 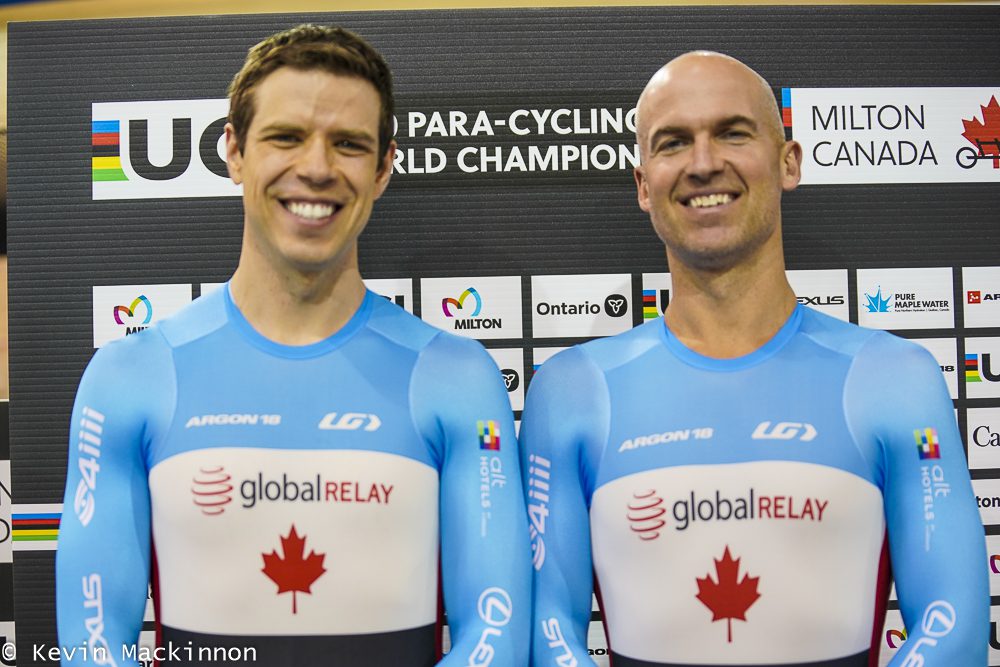 Lowell Taylor, from Lethbridge AB, is accompanied by pilot Ed Veal, from Queensville, ON. The two will tackle the tandem events together, during what will be Taylor’s first World Championships. After racing for the Next Gen Development team for two years, he has made the step up to Cycling Canada’s High Performance Para program. Taylor, a psychologist, father and husband, competed on The Amazing Race Canada Season four in 2016 and finished 7 out of 11 legs. He also hosted two seasons of the TV show Mind Set Go that highlights Paralympians as they inspire Canadian to transform their physical, mental and emotional health.

How long have you been riding?
After racing for the Next Gen Development team for two years I made the step up to Cycling Canada’s high-performance para program.

What are you most excited about for the upcoming championships?
I am so excited for all the firsts of this race week. First World Championships, first race with the Real Deal Ed Veal, first time racing on the high-performance team, first time the Worlds are being held here in Milton, and getting to be a part of it. First time doing a 200m match sprint, it is going to be intense! My wife will be in the crowd and will be the loudest one cheering. She is my good luck charm.

What songs get you in the zone when you’re warming up?
I usually prefer silence, mindfulness and focused breathing as I prepare for a race. The mind is a powerful tool and when it is truly focused, amazing things can happen.

Marie-Claude Molnar, from Longueil, QC, is a veteran on the team competing as a C4 athlete.

How long have you been riding?
I’ve been on the team since 2009, therefore I am the oldest member on the team (but not in age!) I’ve been national champion 27 times, World Cup champion, World record holder and medaled at the 2012 London Paralympic Games in the individual time trial.

Where is your favourite place to train?
The Eastern Townships

What are you most excited about for the upcoming championships?
Being home and getting the chance to race at such a high level on home soil. It’s a real privilege and an honour. My hope is that our performances will inspire people to start cycling.

What songs get you in the zone when you’re warming up?
Can’t Handle Us by Macklemore & Ryan Lewis

Keely Shaw, from Saskatoon, SK, is a C4 athlete. New to the world of cycling, Keely will be attempting some strong performances in front of a home crowd.

How long have you been riding?
I bought my first road bike in 2016 and entered my first local race in 2017.

Where is your favourite place to train?
Kona, Hawaii

What are you most excited about for the upcoming championships?
Representing Canada on home soil and really advertising para-cycling as the best para sport around.

What songs get you in the zone when you’re warming up?
Punk: You’re gunna go far kid, Fire It Up… Pretty much anything by Rise Against

A few other notable athletes are making their way to Milton for Worlds this year, including Jozef Metelka of Slovakia. The C4 athlete won three medals at the Rio Paralympics—two golds and a silver.

Lauro Cesar Chaman of Brazil is another athlete to watch, he won two medals in Rio in 2016 and is no stranger to the World Championships podium, having won the Scratch race at the 2018 Worlds racing in the C4-5 category.

Sarah Story of Great Britain, a C5 athlete and GB’s most decorated Paralympian, has won a number of medals in the pool at the Paralympics. She switched her focus to cycling and has racked up dozens of medals across a number of Paralympics.

Shawn Morelli of the USA is another notable mention attending the upcoming World Championships. After an injury while serving in Afghanistan, she was left with neck and nerve damage and lost sight in her left eye. Three years after the injury she took up cycling and won two gold medals in Rio, one of which was on the track in the C4 Individual Pursuit.

Finally, Zhangyu Li of China is a C1 athlete who has dominated the last two Paralympic games, with a medal of each colour in London in 2012. He followed up those strong performances in 2016 with two gold medals on the track in Rio.

This weekend’s upcoming World Championships is sure to be exciting. The world’s best para athletes will be in town to compete on Canada’s home track. The strong Canadian team will be looking to showcase their race prowess in the facility these athletes call their home track.