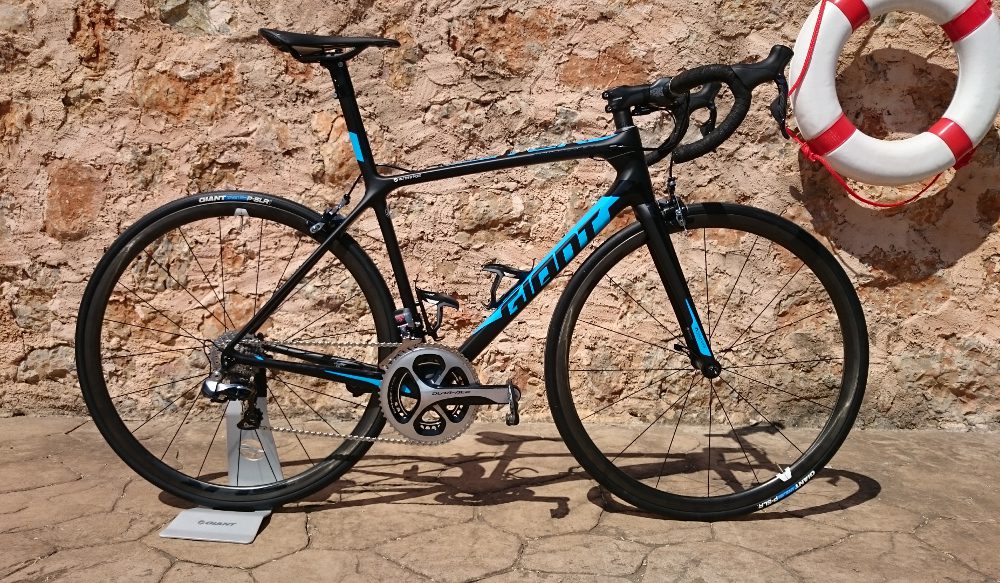 Earlier this week, Giant Bicycles premiered its the latest version of its TCR line, on the Island of Mallorca. The flagship model is the 2016 Giant TCR Advanced SL 0. The Taiwan-based company presents this bike as a racing, climbing all-around machine. On the pro side, such as the riders of Giant-Alpecin at the upcoming Tour de France, it’s for the general classification rider. For you, it’s a high-performance bike that can help you get to the top of a col, such as Mallorca’s Puig Major, quicker and make for a lively ride as you twist your way back down.

Giant debuted the first TCR, which stands for Total Compact Road, in 1997. Then, the riders of ONCE were to bring Giant’s new bike, with its novel sloping top tube, to the world’s biggest races. They were, however, barred from racing the bike at first as the UCI didn’t know what you make of its design. Once the design was accepted, the TCR was the do-it-all bike for the pros. Its lightness and stiffness were qualities that made it perform so well. Since the TCR’s debut, bikes have become more ride-specific and one quality has grown in importance: a bike’s aerodynamics. In response, Giant released its Propel in 2013 as its wind-cheating road bike.

With the Propel now covering the aero needs of riders, the design of the TCR seems more singular in its purpose. The former TCR’s aerodynamic touches are either gone—such as the airfoil-shaped integrated seatpost on the Advanced SL model—or minimized—such as the cutout in the seat tube that brings the rear wheel in closer to an Advanced-level frame. Also missing is material on various parts of the frame. “The general theme of this new TCR has been to scale up and slim down,” said Eric Klemm, Giant’s lead designer for on-road. The trimming happened most noticeably at the front fork, the underside of the top tube, seatstays and chainstays, and at the rear-facing side of the seat tube. The sharp edges of the previous TCR are gone, taking away the boxiness of some sections of the frame. One section that received particular attention was the bottom bracket area. It’s still Giant’s PowerCore design, just refined. “We really looked at revising every single surface for efficiency on this part of the bike,” Klemm said. “The first few pedal strokes you take, whether standing up or sitting, you will feel that the bottom bracket just does not move.”

Klemm’s discussion of the bottom bracket area speaks to one of the main engineering goals of the Giant TCR Advanced SL: achieve a high stiffness-to-weight ratio. While the slim-down component of Klemm’s approach did lead to a frameset that is 12 per cent lighter (by 181 g), he and the Giant team weren’t trying to make the lightest frame. In fact, Giant’s new TCR frame, claimed weight 856 g, is heavier than that of the Scott Addict SL, Trek Émonda SLR, Cannondale SuperSix Evo Black Inc. and the Cervélo R5 (all non-Giant models are 2015 production bikes in size medium).

On the matter of stiffness, Giant looks at two forces that act upon the bike. There’s pedalling stiffness, which is how the power a rider puts into the pedals affects the bottom bracket. There’s also frame stiffness, which is how well the bike tracks in corners. With the Giant TCR Advanced SL, the company wasn’t going after just stiffness either. “We’re not trying to win the outright ‘stiffness war,’” said Doug Barnett, Giant global road product marketing specialist. Barnett helped get the testing and benchmarking started for the new TCR project. He went to local bike shops near Giant’s U.S. headquarters in Newbury Park, Calif., to buy competitors bikes. He then had the machines shipped to Taiwan, where Giant does all of its manufacturing—it controls the whole production process—and testing. “You’ll notice, for instance, when you look at pedalling stiffness,” Barnett added, “the Tarmac is actually stiffer. But the Tarmac was also the heaviest bike in the test. For us, the TCR is always been about balance. So it’s not about one performance factor when you are on the road. It’s not simply about being the lightest; it’s not about being the stiffest. It’s about that stiffness-to-weight ratio. To us, that’s really what you really feel when you are out on the road.”

Giant measures stiffness-to-weight ratio for the bike’s pedalling stiffness, which is force, measured in newtons (N), divided by the distance (mm) the bottom bracket is displaced after a dummy crank is turned. That test is done with the frame and fork dropouts affixed. Testers also check pedalling stiffness with the standard wheels that ship with each bike, but without the tubes and tires on. Once again, testers gathered the results in force over distance (N/mm). As Barnett said, the Specialized Tarmac won both of those tests (76.35 N/mm and 57.93 N/mm) with the TCR coming in second both times (71.09 N/mm and 54.4 N/mm). When you factor in weight (N/mm/kg), however, the rankings change. When you divide the pedalling stiffness of just the frame and fork by their weight, the TCR is tops (51.7 N/mm/kg) with the Cervélo R5 in second (46.7 N/mm/kg) and the Tramac in third (45.3 N/mm/kg). For pedalling stiffness of the frameset and the wheels, which in Giant’s case is the new SLR 0 system, the TCR (20.1 N/mm/kg) is above the Tarmac with Roval Rapide CLX 40 wheels (18.9 N/mm/kg), followed by the Cervélo R5 with Hed Ardennes Plus LT hoops (17.6 N/mm/kg).

One stiffness competition the TCR wins is with frame stiffness. To test frame stiffness, the frame and fork are secured at the dropouts. Force, in this case, is measured in newton metres (Nm) and is applied to the fork. That number is divided by the angle (in degrees) to which the fork is bent. The TCR scored 163.1 Nm/°; the R5 Nm/°, 151.6 Nm/°; and the Tarmac, 151.2 Nm/°.

The 2016 Giant TCR Advanced SL 0, in some ways, is a mix of old and new. As Klemm said, it retains the PowerCore bottom bracket area but with an update to the feature’s shapes and angles. Giant’s OverDrive 2 design appears at the head tube and front fork with its 1 1/4”-diameter top bearing and 1 1/2”-diameter bottom bearing. The system gets a refresh though. “From a design standpoint, we wanted to create the smoothest transition possible in the frame and the fork, but we also wanted to give an added benefit to the rider, something tangible,” Klemm said. “So, we’ve moved the lower bearing up 2.5 mm. This takes all the twisting forces that you use when you are sprinting and translates them more in line with the down tube. Because the bearing is a little bit higher, it creates a better tangent line with the down tube really to solidify the frame and fork coming together.”

A feature that Klemm and his team brought back to the 2016 TCR, which has been absent since model year 2012, is the yoke at the top of the seatstays. “In the previous generation of the TCR, we had an A-type stay, which, of course, is the bridge across the top of the seatstays for the brake mounting,” Klemm said. “But after analysis, we were able to come to the conclusion that this yoke is lighter. It’s hollow; it uses thinner material; and it really takes away all the excess material that was needed to wrap around the bridge and the seatstays to create the A-type.” While the yoke may look like a throwback, it, like the bottom bracket area and the head tube, has been designed anew.

Brand new for the 2016 model is the Variant seatpost, which comes in an ISP for the top-of-the-line Advanced SL, but in a more traditional adjustable seatpost for Advanced Pro and SL. The design of the Variant takes from both the D-Fuse seatpost on the Defy endurance bike and the Propel’s Vector. Giant wanted a balance between more compliance for comfort, while still retaining the right amount of stiffness for the best power transfer. The Variant has a narrower profile than the previous TCR seatpost, and the Variant has a rounder cross-section. That shape means the walls have a uniform thickness, unlike the previous seatpost. The new shape also helps to shave off 30 g.

The geometry of the 2016 TCR Advanced SL features subtle changes when compared to the 2014 models. Really, for 2016, you see slight tweaks to the design, instead of an overhaul, and only among certain sizes. For example, the head tube angle on the small frame increase half a degree to 72.5. The wheelbase on the medium/large increases 11 mm to 997 mm. The top tube on the large frame sheds 5 mm to 580 mm.

The Advanced SL 0 is the top-end model of the new TCR lineup. It’s equipped with a full Shimano Dura-Ace Di2 setup. At the crank, 36/52-tooth rings move the KMC X11SL chain toward the 11-speed, 11×28 cassette on the rear wheel. Giant’s new performance saddle, the Contact SLR, sits on top of the seatpost. A Contact SLR handlebar and stem round out the cockpit. The new composite wheels, Giant SLR 0, roll on 23-mm P-SLR1 tires. There’s also an Ultegra Di2 spec (Advanced SL 1) and Ultegra spec (Advanced SL 2). The next setup down is the Advanced Pro line with the frames made from Giant’s second-level composite formula, called simply Advanced. These models have adjustable Variant seatposts, as opposed to ISPs. Each adjustable post comes with a cap at the seat tube/top tube junction to keep the lines neat. Rounding out the line are the TCR Advanced models, which are made from the same composite as the Advanced Pros. Each Advanced model comes with an hybrid OverDrive steerer.

My first rides on the 2016 Giant TCR Advanced SL 0 were on the roads in the northwest of the Island of Mallorca. These rides started at about 150 m above sea level, and would then head to the Serra de Tramuntana, the line of mountains that run along the island’s coast touching both its western and northern points.

Before I took the TCR into the mountains with my group, before I even took it on a proper road actually, I rode it on a gravel lane to make sure my setup was dialed. I’ve been riding a 2012 TCR Advanced 0 for years, so I’m familiar with the line. I noticed, on the new TCR, how its manoeuvrability was much better than on my own bike. The new Advanced SL seems ready to take any twist or turn in the road. And the roads got twisty. On the second day of riding, I came down Coll de sa Batalla, which is loaded with switchbacks. I was not only able to scrub speed well before starting my turns—the new composite SLR 0 wheels, their proprietary brake pads and Shimano’s Dura-Ace calipers working well together—but the bike tracked excellently through the bends.

To get to the descents, however, there had to be climbs, such as the 14-km Puig Major. In the earlier parts of the climb, when the group was sorting itself out, the TCR’s stiffness was just the thing when I needed to hit the pedals hard to then grab onto another rider’s wheel. Later in the climb, when it was simply the time to tap out your own rhythm, the bike’s stiffness-to-weight ratio kept me cruising upward nicely.

As a flatlander, the riding in the mountains was a treat. But, it was also necessary to ride the TCR in its element. I am looking forward to trying the machine on the punchy roads in my area, too. Those lumpy routes with bumpy blacktop will really show me how the Variant seatpost compares to the Defy’s D-Fuse. I’m sure the TCR, the all-around GC bike, will be able to handle whatever I throw its way.