Although the original event was cancelled, the Tour of Flanders took place virtually on April 5. A 32 km course recreated the original race route’s most iconic features, and pro cyclists were able to participate from the safety of their own homes.

The start list was small and exclusive—only 13 pros were invited to the race. The quick race, available for replay on Flobikes, was fun and exciting to watch. 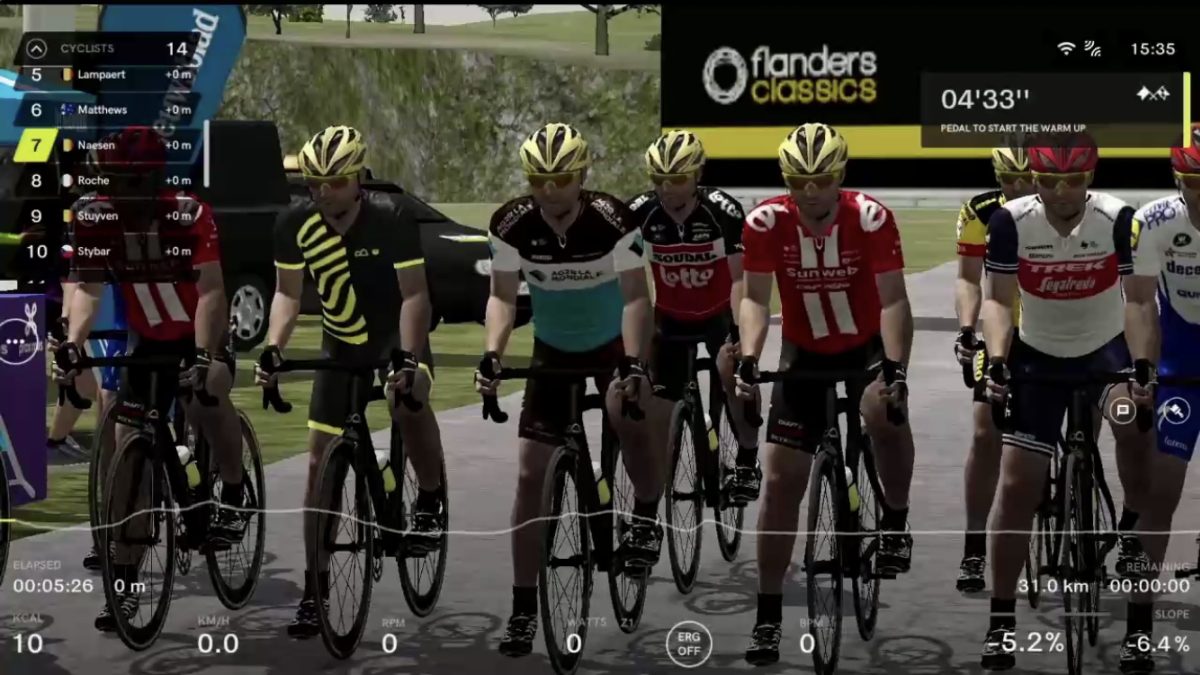 Although they all looked like the same person in the videogame, the pro cyclists’ real-life setups varied wildly, from luxurious to cramped and uncomfortable. We ranked the setups on a scale of 1-10, or rather on a scale of DIY rolling pin trainer to Chris Froome’s personal training gym. 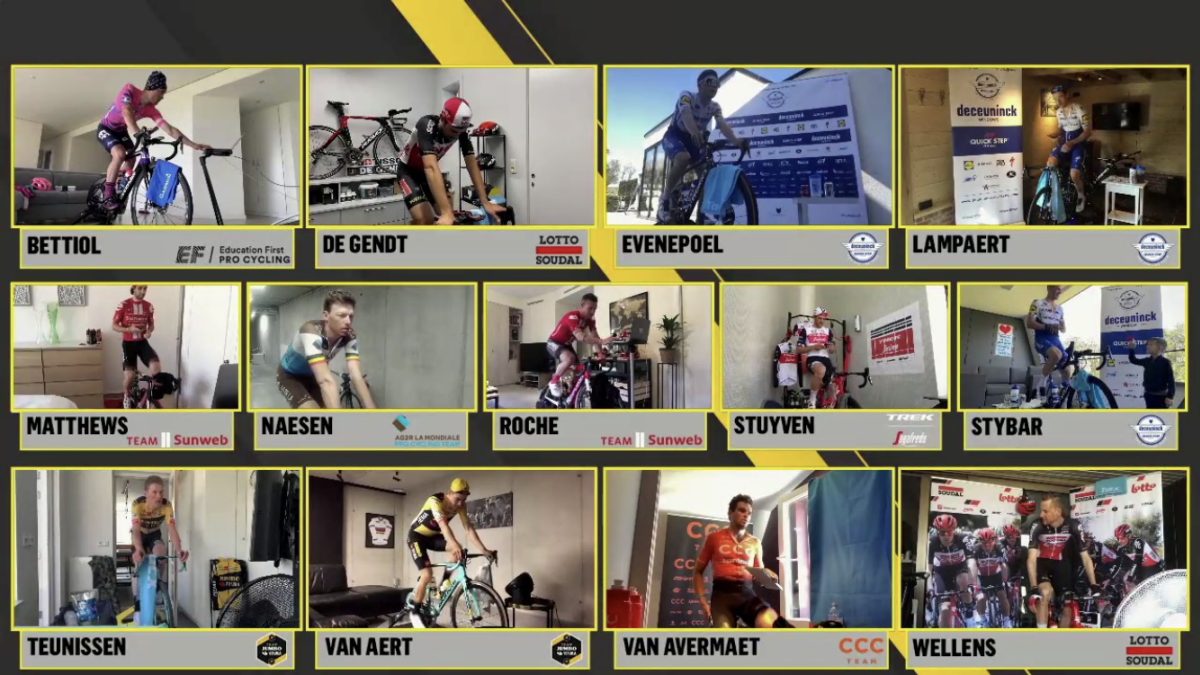 The Belgian pro cyclist finished first in the virtual race, with a 20 second gap on his opponents. His trainer setup looks pretty cozy. The room is just wide enough for him to fit the trainer, himself and no visual distractions. The blue sheet blocking out the light from the window looks like a temporary addition. Is it to block out heat? To keep flattering lighting on Van Avermaet? Hopefully his Amazon curtain rod order isn’t delayed for too long. 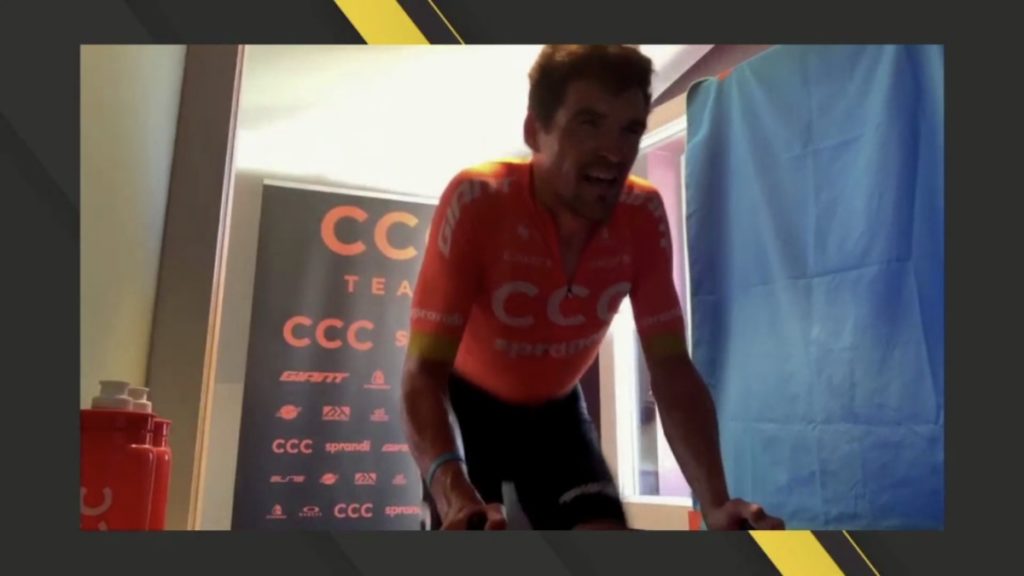 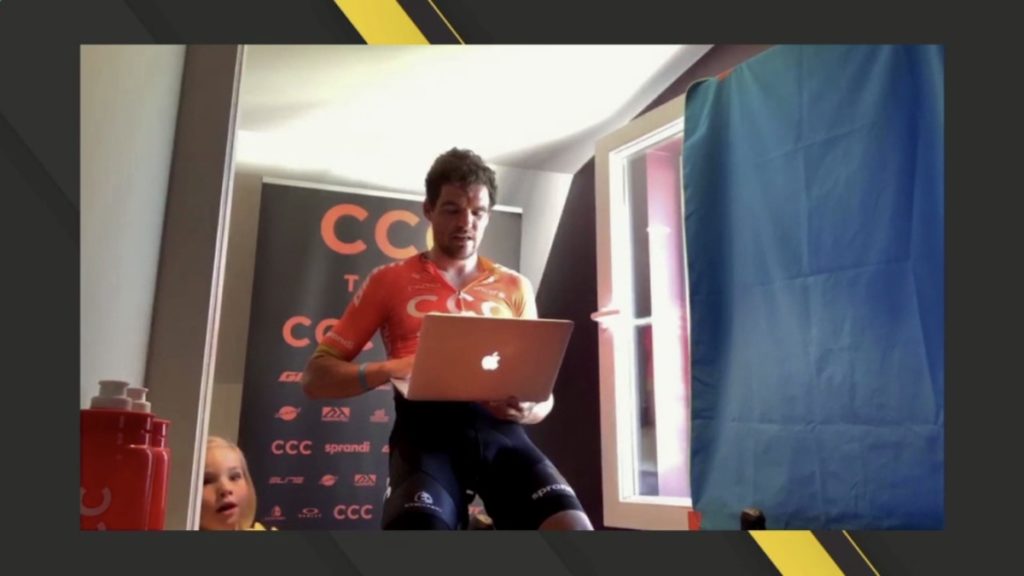 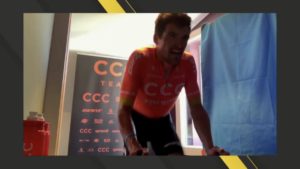 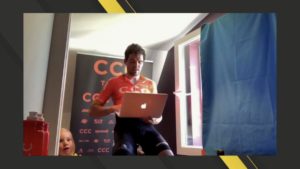 The cyclists does a good job with CCC advertisement without getting too in-your face (note the well positioned water bottles).
7/10 (+1 point for his cute daughter poking her head in at the end of the race.)

Where is Blegian cyclist Jasper Stuyven’s trainer located? Is it a re-purposed, very tall shower? The light looks like an outdoor sconce, is he outside? Is this a cool Euro indoor/outdoor spa-type setup? Somehow a picture posted from another angle only leaves us with more questions. 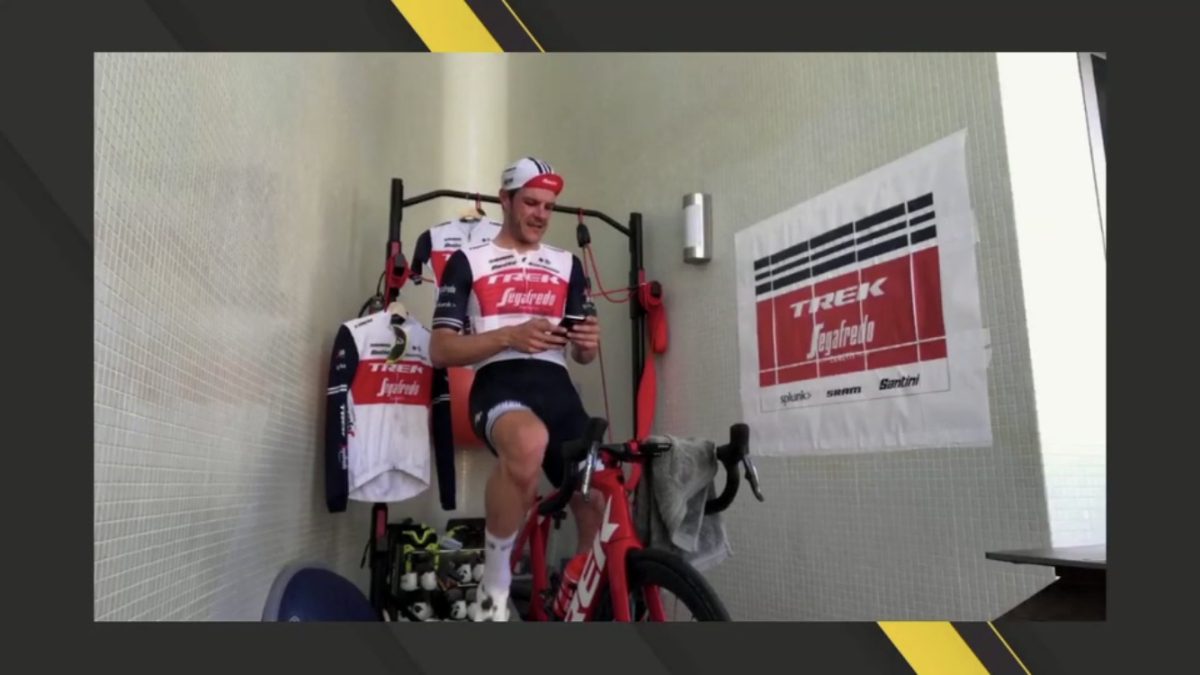 Wherever he is, it looks really nice.

Matthews ended up pulling out of the race due to a mechanical, but the Australian did offer a pre-race glimpse of his setup, during which he was blasting the David Guetta ft Akon classic ‘Sexy B*itch’ .

His trainer looks like it’s right next to his bed. In a small space like that, he’s either putting it away after every use or leaving it out and awkwardly climbing over it every time he goes in and out of his room (a recipe for multiple stubbed toes). Although cramped, the bedroom setup offers a dresser to provide a surface for nutrition and hydration, and he could very easily plop right into bed when the race is done.

Bettiol has a relatively basic living room setup, but in true EF style, he wins points for fashion. The 26-year-old Italian was prepared for a sweaty indoor ride, he had a buff over his airpods, and a towel on his front wheel to wipe his face. He casually showcased his sponsors, leaving his helmet on the couch and the ‘Garmin’ branding on the towel facing the camera. 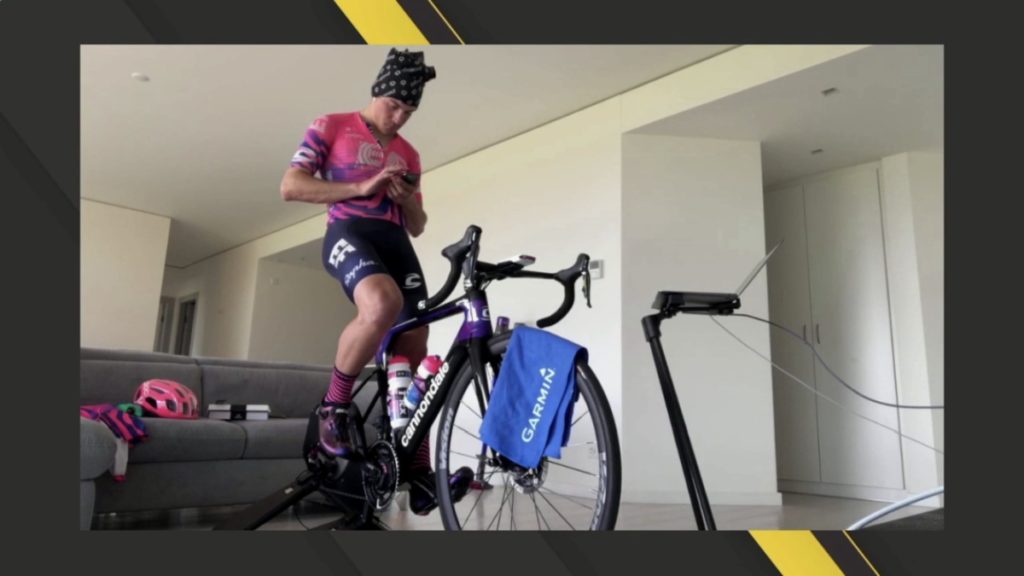 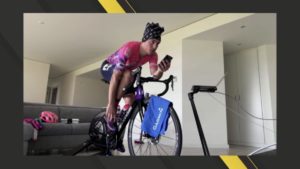 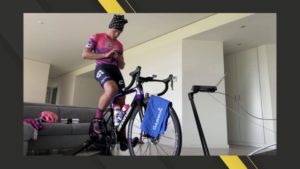 His laptop cord looks like it was just long enough to plug in, hopefully he doesn’t have any small animals or children staying with him, at it seems pretty precarious.

6/10 (someone mail him an extension chord)

Nicholas Roche finished third, narrowly missing out on second to Naesen. His camera gave us a view of his living room, which looked comfy and nice. The Irish cyclist has a plant on the far right of the shot, lending some greenery to the room and nicely complimenting his computer podium. 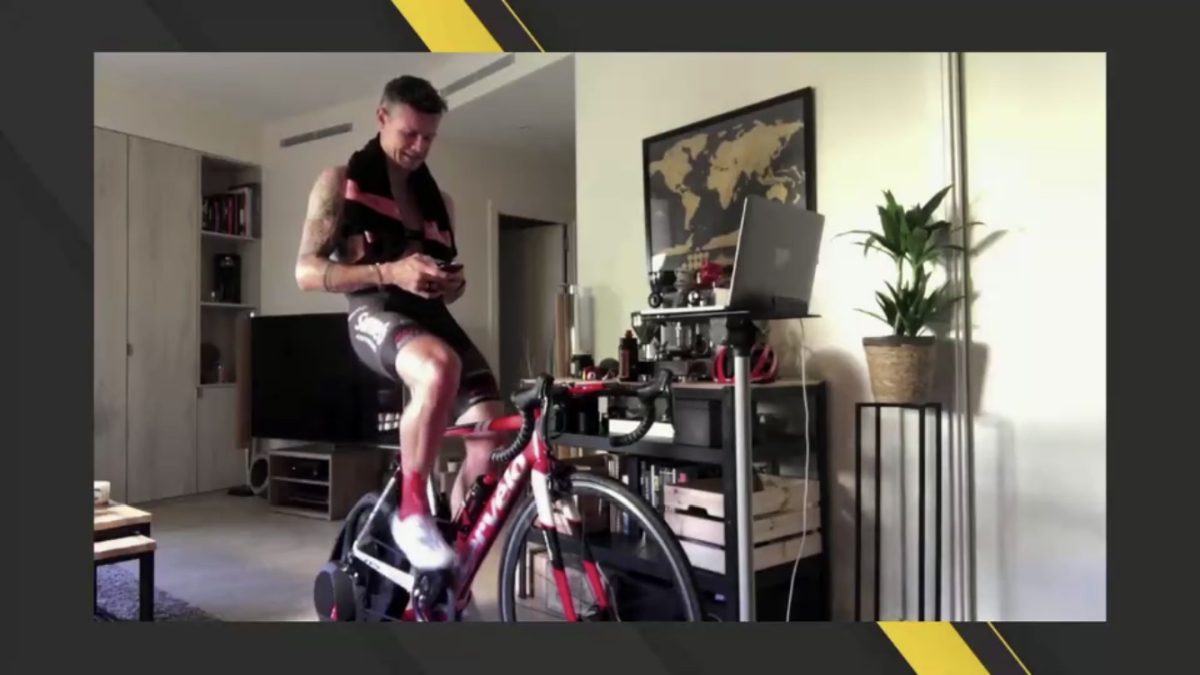 Unfortunately, it looks like Roche either either isn’t aware of or chose to not use the full functionality of the scratch map he has framed above his shelves.

Naesen finished second in the race, beating out Nicolas Roche in a sprint. This one day classics specialist is taking social-isolation very seriously, keeping his trainer in what looks like a very long underground bunker. In his defense, the completely concrete room (tunnel? Secret lab?) looks like it would be nice and cool, a must for indoor trainer rides. 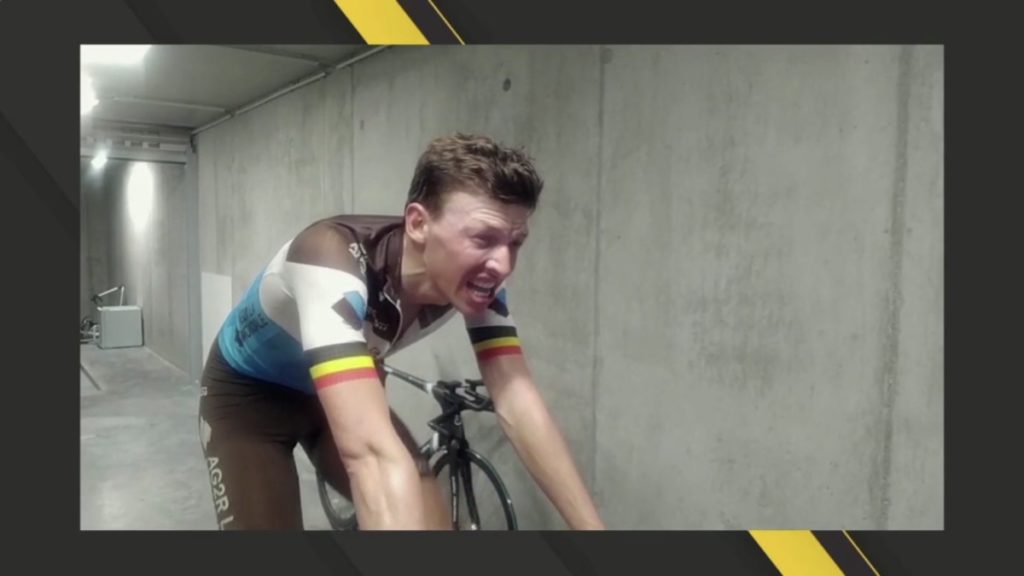 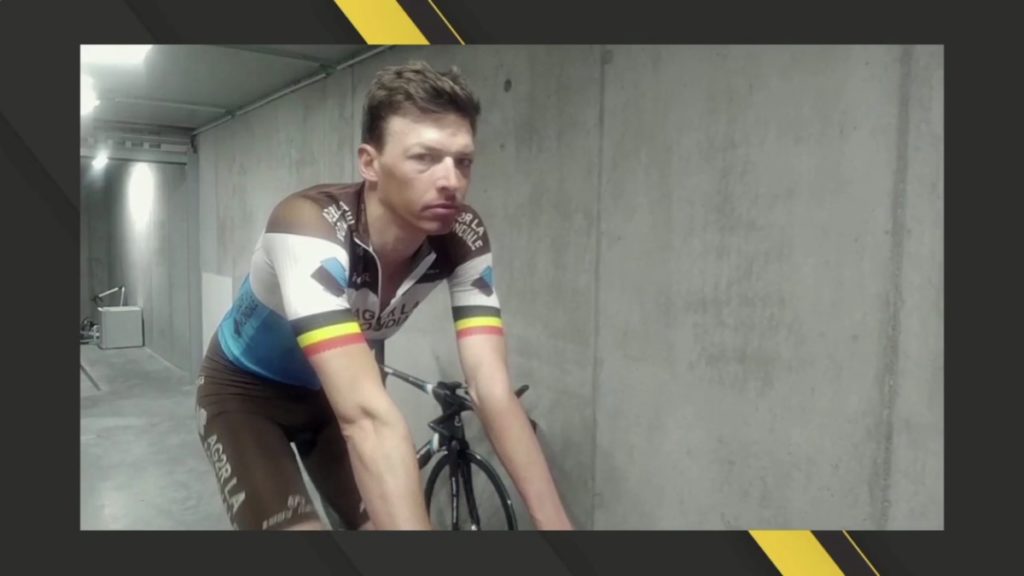 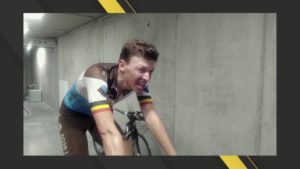 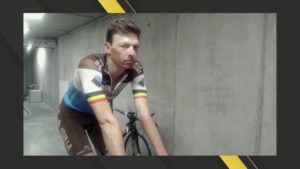 Naesen’s secret apocalypse bunker (at an undisclosed location) gets an 8/10 for brutalist functionality.

Pros, they’re just like us! Jumbo Visma’s Mike Teunissen’s entryway trainer setup is just like thousands of the cramped, awkward trainer placements of amateur cyclists around the world. 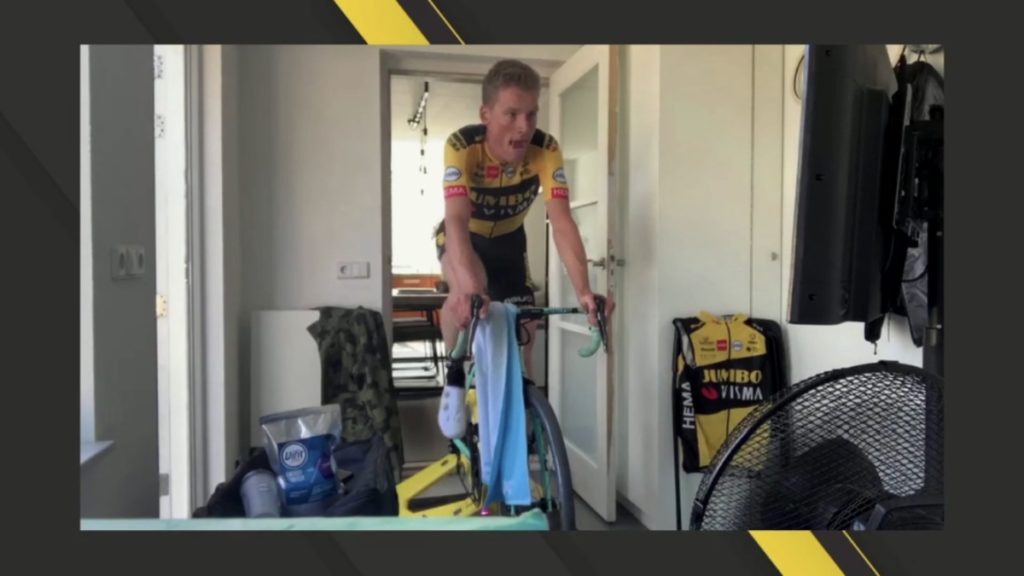 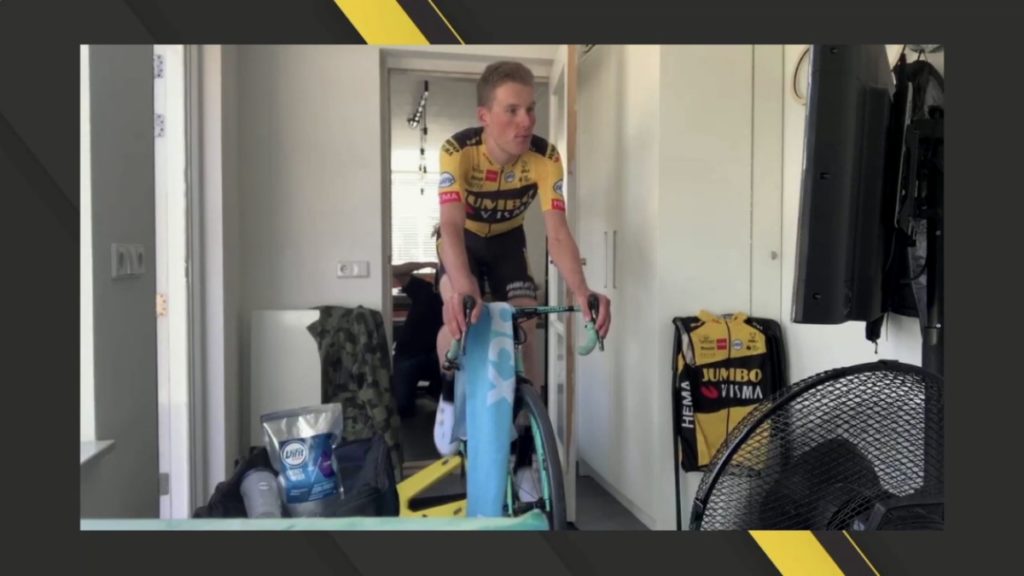 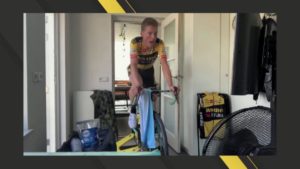 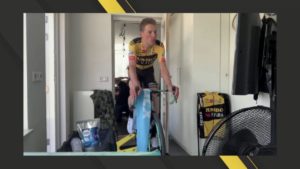 It looks like he’s optimized his placement for airflow, positioning himself next to an open door with a fan in front of him. A big TV finishes the setup, and, honestly, it looks like he’s got everything he needs.

van Aert’s otherwise unremarkable basement trainer setup was enhanced by a very brief visit from a small dog wearing a Jumbo-Visma-yellow jacket when he finished his ride. 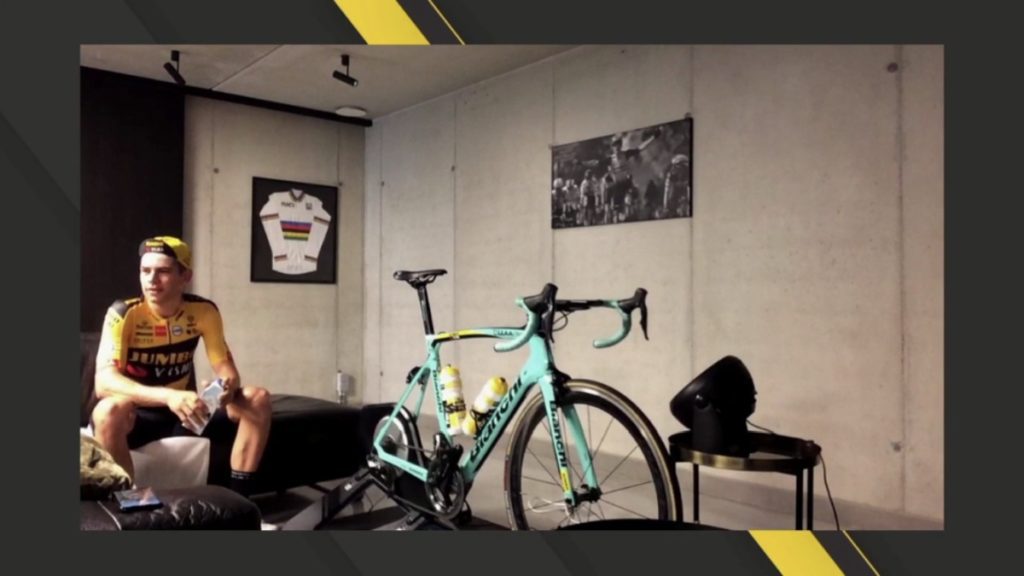 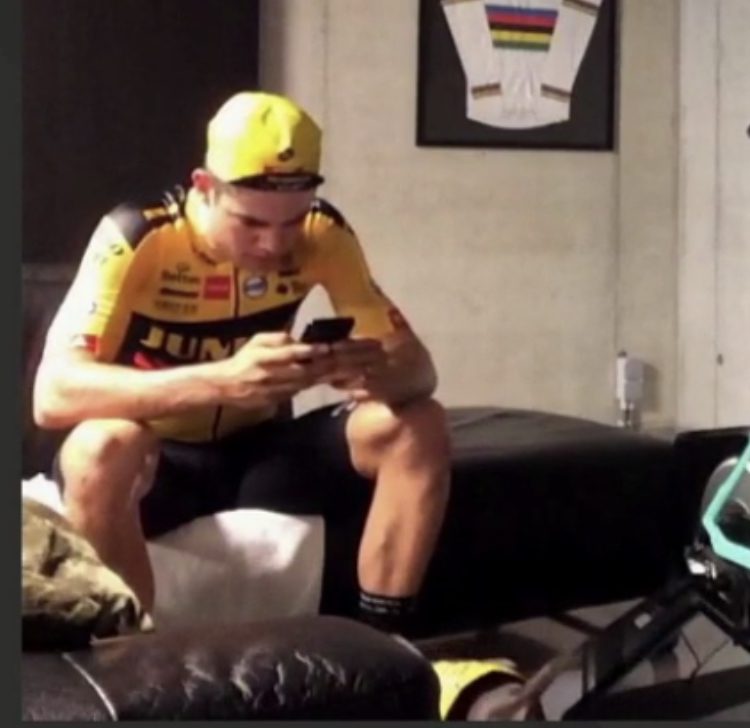 The dog was just visible at the bottom of the shot 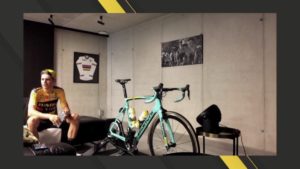 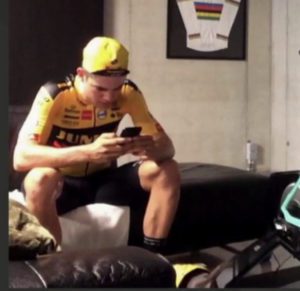 The casual world champion jersey on the wall is a fun little flex. 6/10

Štybar had a beautiful setup for his bike. The 34-year-old put his trainer on a balcony which overlooked greenery, protected him from the sun and probably cooled him with a little breeze. He  finished his race in tenth place, immediately cracking open a non-alcoholic beer. His post-ride selfie was interrupted by his child running around trying to get his attention and ultimately Štybar gave the kid his phone to play with. 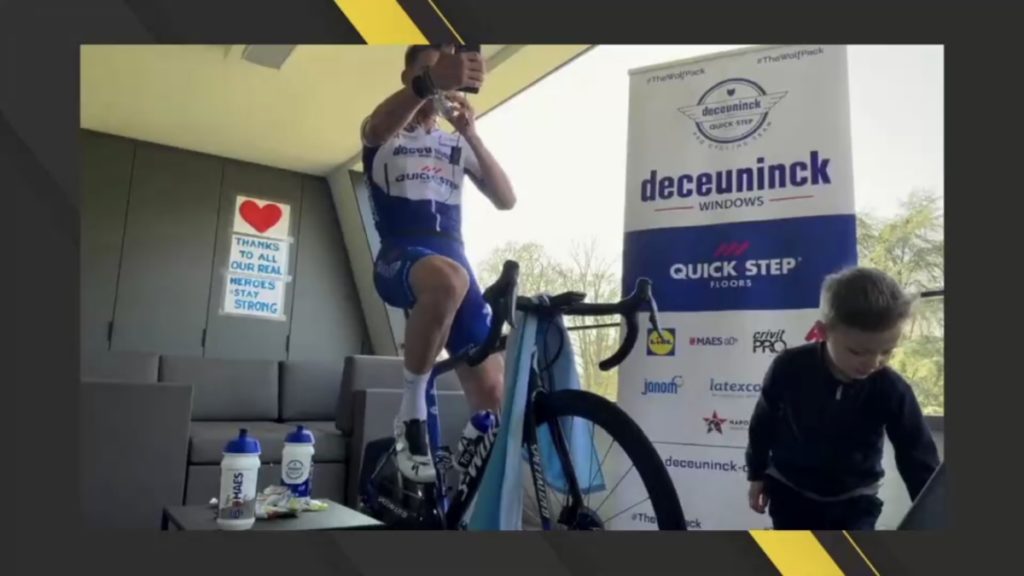 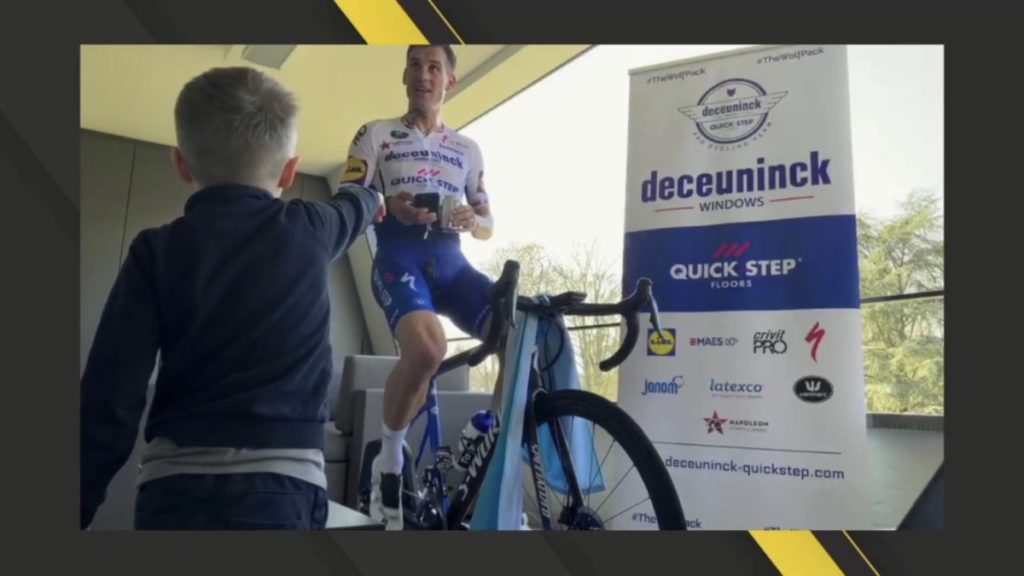 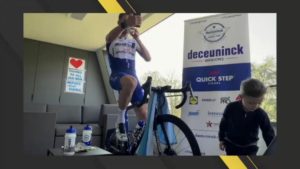 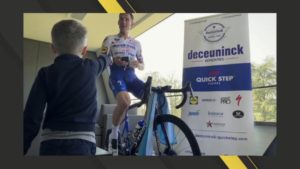 Phew that was a cool experience! @rondevanvlaanderenofficial on the rollers 💪🏼 A lot of sweat so a lot of drinks now 😅 @maes_pils @deceuninck_quickstepteam #DeRonde2020 #lockdown edition #staysafe #staystrong #flattenthecurve and THANK YOU to all our real heroes! ❤️

Štybar had a heartfelt message behind him during the race, “Thanks to all our real heroes #staystrong”