Three yet-to-be-determined Canadian men will compete in the Olympic road race on Saturday, July 25. The race will be 234 km, with 4,865 m of elevation. The event will begin in the Metropolitan Tokyo area, loop around Lake Yamanakako, through the Fuji International Speedway, up the lower slopes of Mount Fuji, and will conclude with the riders returning to the Fuji International Speedway. 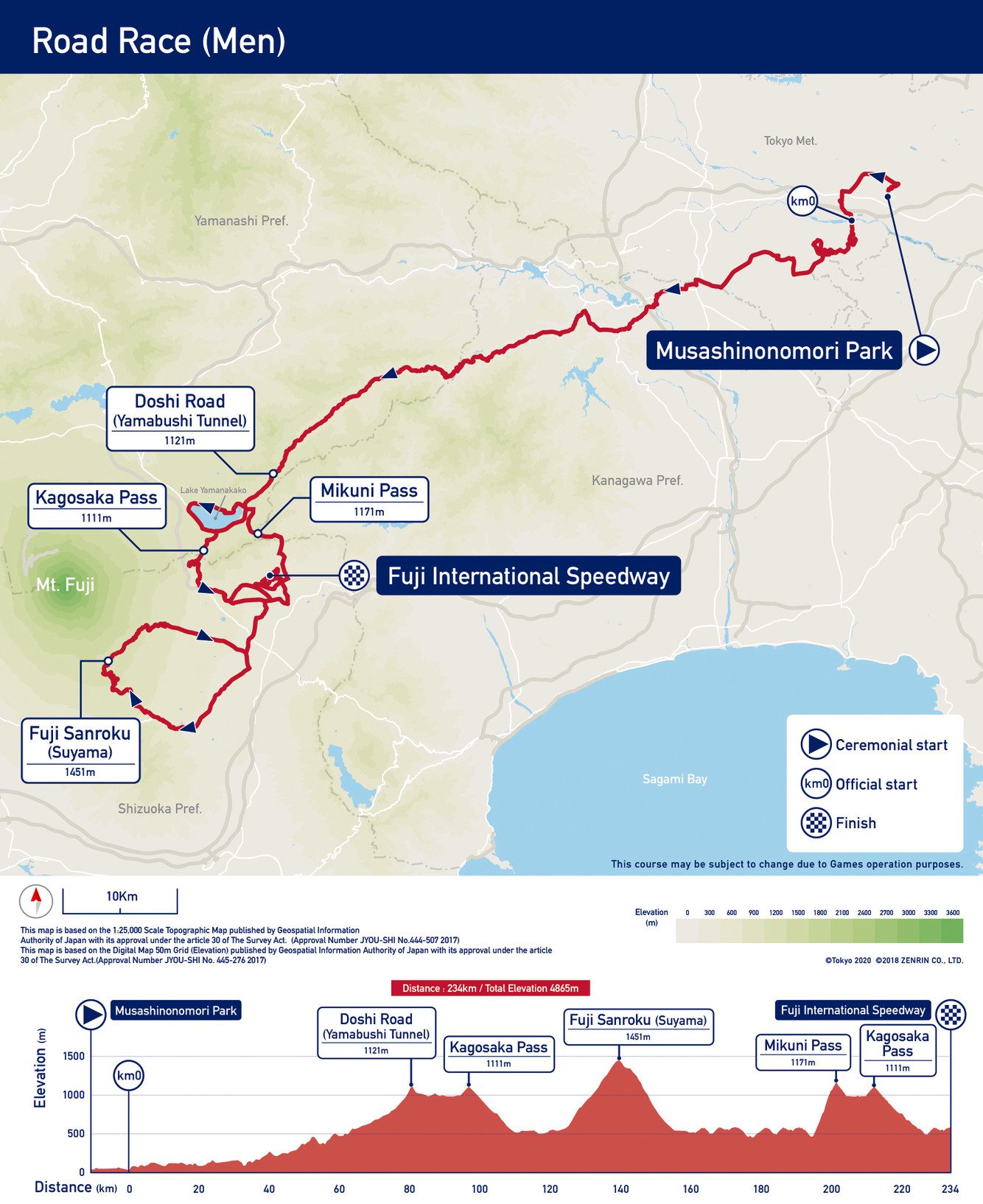 The women’s road race will take place on Sunday July 26. Two Canadian women will compete in the 137 km race, beginning in Metropolitan Tokyo area and ending at the Fuji International Speedway. The women’s race will not be passing Mount Fuji, and will have approximately half the number of riders (67 women) and significantly less elevation (2,692 m elevation) than the men’s race. Cyclists such as Marianne Vos and Annemiek van Vleuten voiced their disappointment when the course was announced:

Disappointed (again!) to see the differences in courses between men and womens roadrace in #Tokyo2020 #Equality @UCI_cycling https://t.co/Y48O49I4PH

Riders make the race, but the signal that goes out from this different course types for men & women is not the equality #IOC aims for. https://t.co/ktnIQFrBaE 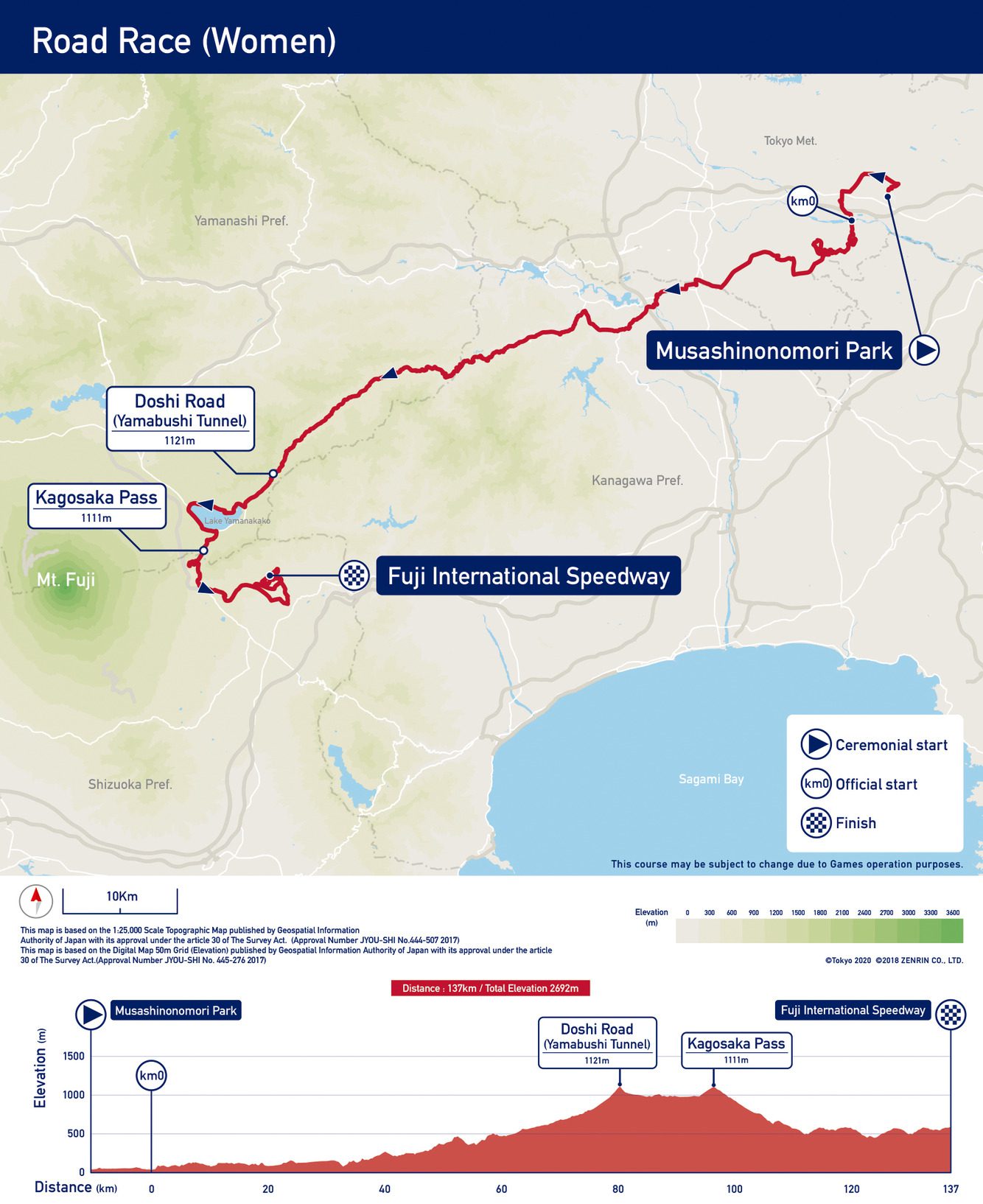 The men and women’s individual time trial will take place on July 29, at a 22.1 km circuit based around the Fuji International Speedway. Men will complete the loop two times for a total of 44.2 km, and women will race for 22.1 km, completing the course once. Both the men and women’s races will likely have to deal with hot temperatures, as the average high for July in the area is between 29 and 31 C. 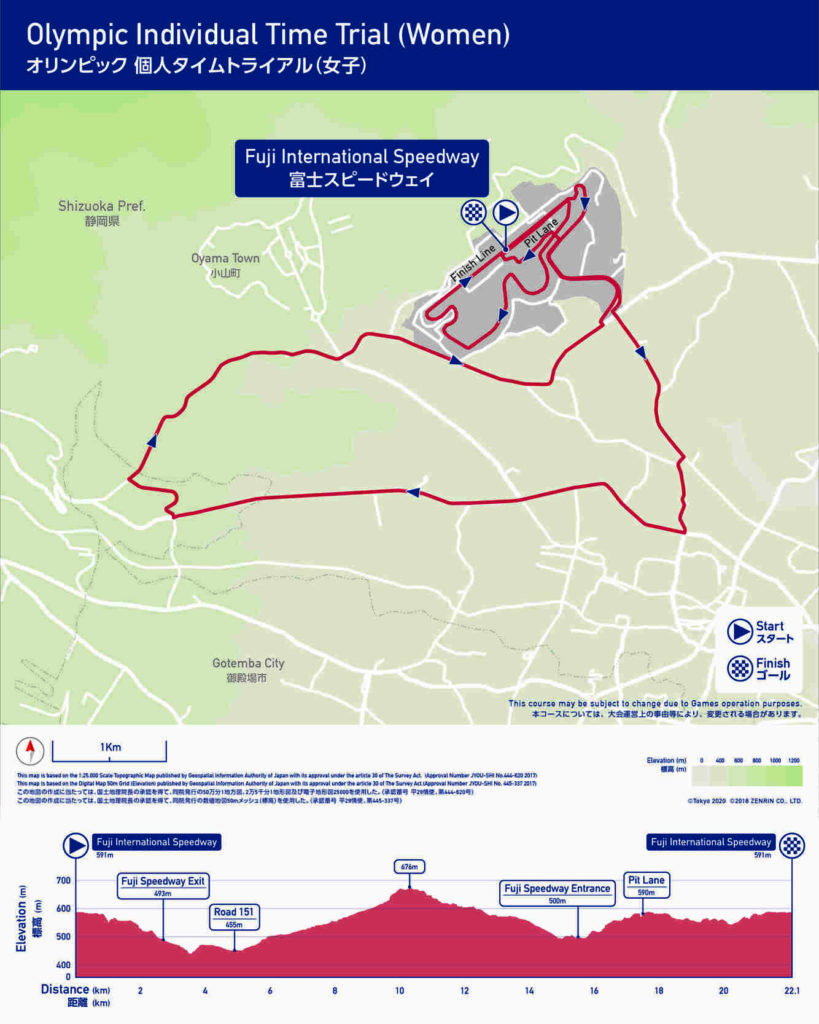 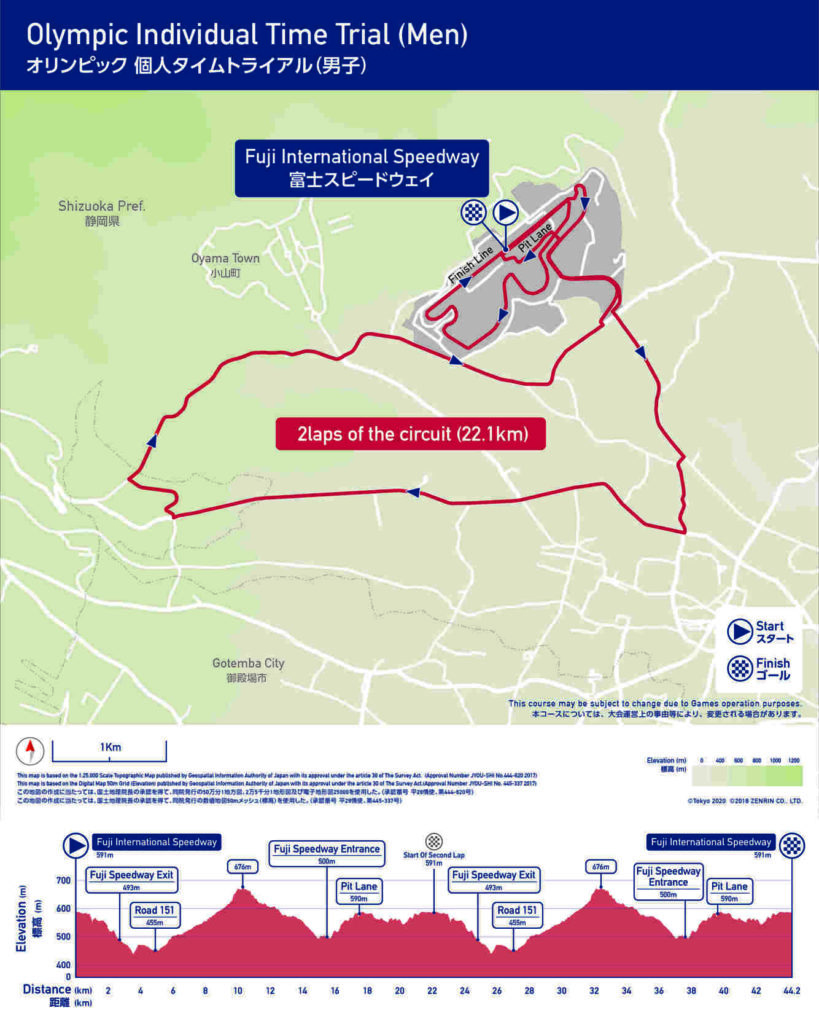 The 12 Olympic track cycling events were originally slated to take place at a new venue in Ariake, but, in order to save $100 million on construction costs, the location of the events was changed to the existing velodrome in Izu. The Izu velodrome is 120 km away from Tokyo and, though the UCI originally voiced its concerns about how this distance could take away from the Olympic experience for both athletes and fans, it eventually agreed to the venue change.

A variety of track events will take place at the 4,300 seat velodrome, from Aug. 3-9. This olympics will be the first to include the madison in its track racing program. The race will be 50 km for men and 30 km for women.

The number of Canadians participating in Olympic track events will be announced when the final UCI Olympic qualification rankings are published, on Mar. 2, 2020 (after the 2020 UCI Track World Championships in Berlin).

The challenging Tokyo XC course includes large drops, huge boulder gardens and steep hills that set the venue apart from the regular World Cup courses. The course, built in 2010, is located in Izu City, and measures 2.5 km with elevations of up to 85m.

How tough is the 2020 Olympic course? Take a peak. After two days of learning lines I’m excited to line up and race it in a couple hours! #readysteadytokyo #tokyo2020 #mtb

When asked what it’s like to race the Izu course as part of the Tokyo MTB test event, Canadian three time Olympian and 2016 Olympic bronze medallist Catharine Pendrel was very positive. “I think it is one of the most diverse courses we have been presented with,” She says. “It is a 50/50 split of new style features like rock gardens, jumps and berms contrasting many off camber natural woods sections. The climbs are quite steep and short and combine to keep you constantly pushing, but likely our greatest challenge will be the high humidity and projected 38 degree temperatures.”

The races are scheduled to take place on July 27 (Men’s) and July 28 (Women’s). On May 28, 2020 the UCI will announce the number of participants from each country. In total, 38 men and 38 women will compete but we don’t yet know how many Canadians will be competing.

The 2020 Olympics will be the first to include BMX freestyle park, described by the UCI as, “a spectacular, crowd-pleasing discipline, which takes place on ramps with big transitions and large obstacles.” In total only nine men and nine women will compete in the BMX freestyle competition, from Aug. 1-2. We will find out mid-May if any Canadians have qualified.

Canadian Tory Nyhaug finished fifth at the last Olympics, but has retired this year and will not be competing in this Olympics’s BMX racing. 48 racers (24 men and 24 women) will compete in the BMX races at Ariake Urban Sports Park on July 30-31. The 6,500 seat venue will also host BMX freestyle and the newly added skateboarding event.