Team Sky become Team Ineos this week closing a 10-year chapter in Dave Brailsford’s team’s history. The first British WorldTour team with six Tour de France titles moves on to a new deep-pocketed corporate backer. Ineos promises to continue to provide the hefty budget the team’s success has been built on. Not all the headlines about Sky have been positive. Over the years the team has attracted considerable controversy but pushed on to leave an undeniably lasting impact on professional cycling. Here are 10 lasting memories from Team Sky’s 10-year history:

Bradley Wiggins 2012 Tour de France victory was a huge moment for Team Sky. The team had set out a five-year plan to win the Tour with a British rider and they exceeded expectations by doing it in only three. Wiggins victory set the tone for the following years of dominance at the year’s biggest professional bike race. With the success came a ballooning budget that allowed Sky to retain the calibre of riders needed to succeed at their stated goal. Wiggins success in 2012 was a clinical and calculated team effort where we won the time trials and then relied on domestics such as Chris Froome, who would ultimately place second, to control the mountain stages.

With the team’s success came a level of scrutiny that exposed some very questionable and ill-advised behaviour for a dominant team winning Tour de France title’s year after year in the wake of the Reasoned Decision and Lance Armstrong’s admission to doping. The team professed to have a zero-tolerance for doping despite having been exposed to employing doctors and riders connected with cycling’s dark past. Then came the Fancy Bear’s hack which exposed the team for seemingly using Therapeutic Use Exceptions to strategically treat riders with performance enhancement in mind. There was also the story of the notorious jiffy bag that Wiggins received at the 2011 Critérium du Dauphiné and a mysterious package containing testosterone patches that was delivered to British Cycling and Team Sky’s doctor Richard Freeman that was never well explained. In 2018, a UK Parliamentary committee concluded that Team Sky “crossed an ethical line” using medication to “enhance the performance of riders”. The report went so far as to say team principal Dave Brailsford had to take responsibility for the skepticism of the team’s performances and success. 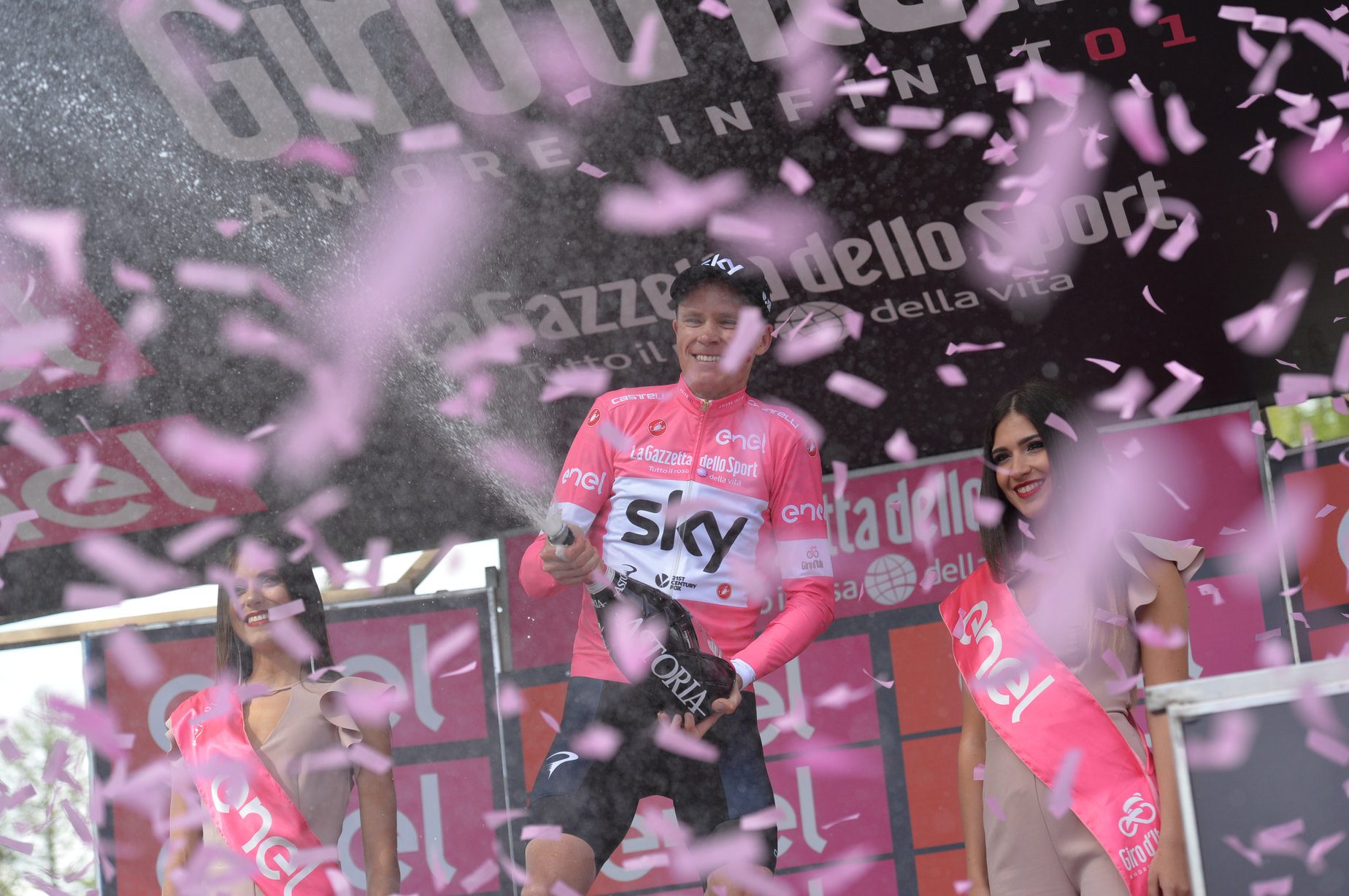 When Chris Froome added his fourth Tour title in 2017 and then proceeded to win the Vuelta a Espana that same year, he set himself up for a historical accomplishment. In 2018, Froome won the Giro d’Italia in dramatic fashion and became the first rider since Bernard Hinault to hold all Grand Tours at the same time since 1983. Love him or hate him, Froome has proven to be a generational talent and will be remembered for what he accomplished with the Sky logo on his chest.

Looming over much of Froome’s Grand Tour run was his adverse analytical finding for elevated levels of the asthma medication salbutamol from the 2017 Vuelta. From December 2017 to July 2018, it remained an open question if all his results would stand and whether he might face some sort of sanction. Finally, the case was dropped by the UCI which statement on the matter simply stated that the Froom and Team Sky had supplied sufficient evidence for them to conclude that the test result did not constitute an adverse analytical finding.

Geraint Thomas’ 2018 Tour de France victory saw the maillot jaune on the shoulders of a Sky rider in Paris for the sixth time in seven years. The Welshman won two mountain stages on his way to a convincing victory. With Froome in third, it was another dominant display by Sky. Thomas capped his incredible three-weeks off with arguably the most memorable of Sky’s victory speeches but not because of the words he spoke. Instead, it was the way he delivered the concluding words on his race, with a dramatic and perfectly timed mic drop.

Sky was never the most exciting Classics team but Wout Poels delivered the team’s first Monument victory in 2016 and then Michal Kwiatkowski followed that up taking Milan-San Remo in a dramatic sprint in 2017. Those wins stand out in a sea of stage race successes. Sky often drew criticism for their singular focus on the Tour de France at the expense of the much beloved one-day classics.

As the peloton’s best-funded team, Sky had access to some incredibly fancy equipment. Their souped-up team bus had sliding glass doors and extra storage for riders mattresses. At the 2017 Vuelta, Sky unveiled the Team Sky Race Hub which dwarfed all the equipment other team’s had access to with room for team meetings and their chef. Going further back, at the Giro in 2015, the team planned to use a luxurious motorhome for Porte to sleep in but the UCI decided to ban it before the race. With the deep pockets of Ineos, keeping a close eye on the team’s equipment will continue to be worthwhile as they roll out the best support structure in professional cycling for their riders.

Dave Brailsford and Team Sky dubbed a new cliché almost on par with full gas and 110% because of their dominant success. Behind stage race wins, the team would point to the marginal gains they were making behind the scenes. Brailsford explained on numerous occasions all the things the team were doing to get 1 per cent better. “It struck me that we should think small, not big, and adopt a philosophy of continuous improvement through the aggregation of marginal gains,” Brailsford explained in 2015. Indeed the gains were marginal. The team hired a surgeon to teach the riders proper hygienic practices to avoid illness. The mechanic truck’s floor was painted white so dust wouldn’t accumulate in the work area and affect the team’s bike maintenance. They sought small improvements in the wind tunnel and in their use of power meters in training and racing. The team would bring their own mattress and pillows to hotels. This approach has definitely had a lasting impact as more teams have made similar adjustments as Sky. 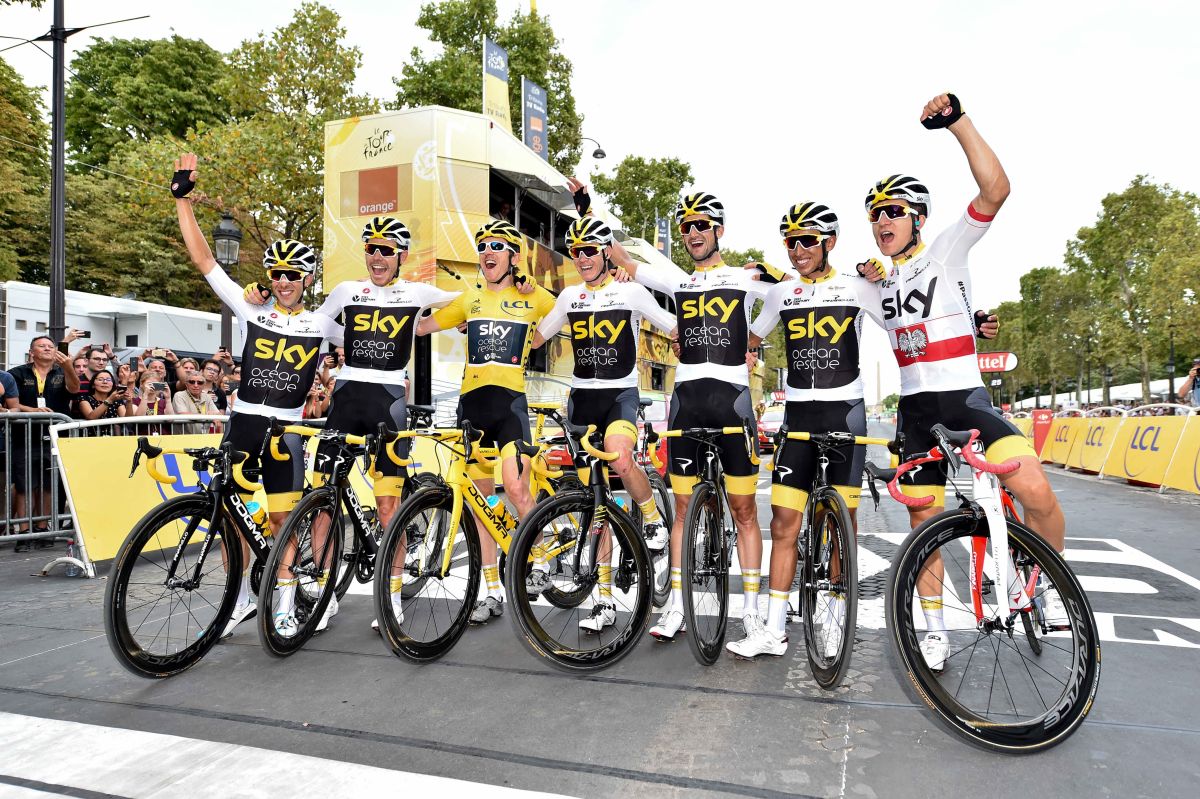 Arguably at the root of Sky’s success was the incredible cast of support riders assembled to ride for their team leader’s. The Sky mountain train continues to be a nearly impenetrable fortress in France. When Wiggins won, Froome was second and then would go on to win four Tour titles. Thomas was a proven support rider for Froome before he was given the opportunity to finish it off himselt. With that much depth and support in the mountains of France, they were an imposing team to beat. Riders who could be team leaders in their own right like Michal Kwiatkowski and Wout Poels have become career support riders at the Tour at Sky. Superstars like Elia Viavini, Mark Cavendish and Rigoberto Uran didn’t get as many opportunities to chase their own opportunities with Sky forcing them to make team changes.

In a move that will potentially make the team even less likeable, Team Sky will become Team Ineos on May 1. The worlds second biggest petrochemical company is extremely unpopular because of its fracking projects in the UK. Additionally, Ineos’ CEO Jim Ratcliffe is Britain’s richest man and after being a strong proponent for Brexit, he moved his personal wealth to Monico where Sky are based. Already there are big protests planned for a long the route of the Tour of Yorkshire. While telecommunications companies are generally not particularly popular, Ineos brings a whole host of new complications despite the assurance they will maintain and even potentially increase the team’s already very sizable budget.