Now entering its fifth year, Toronto Hustle is a rapidly rising Ontario team that races in North America and Europe. The squad has worked to reshape the way professional cycling is developed, delivered and sustained through grassroots community building. With a focus on developing Canada’s next generation of cycling talent, pushing for safer streets, getting more people on bikes and growing the women’s cycling community, Toronto Hustle has made a significant impact in the cycling community on and off the bike.

For 2021, Toronto Hustle will be expanding even further to provide more opportunities for the next generation of cycling talent through a dedicated U19 Junior Development Program.

Toronto Hustle has a history of developing U23 talent. Past riders have achieved national titles, podiums, and graduated to higher levels of cycling. This new program aims to enhance opportunities and act as the missing link in developing young Canadian cyclists.

RELATED: How Travis Samuel broke a world record and got through 24 hours on the trainer

Developing and supporting cyclists in the Canadian road cycling community has been a major topic of conversation this year.

When Cycling Canada announced the 47 potential 2024 Olympic athletes chosen for funding and development, no road cyclists were named. Hugo Houle, who races for Astana, was very clear on his disappointment.

“There is a selection for BMX, mountain biking, para-cycling, track sprint, men’s track endurance, and women’s track endurance. I don’t see any road cycling in there,” Houle said. “It’s still quite strange that a national federation does not put any development program for road cycling, which is probably the sport for which there are the most licensees. For me, this is a big disrespect.” 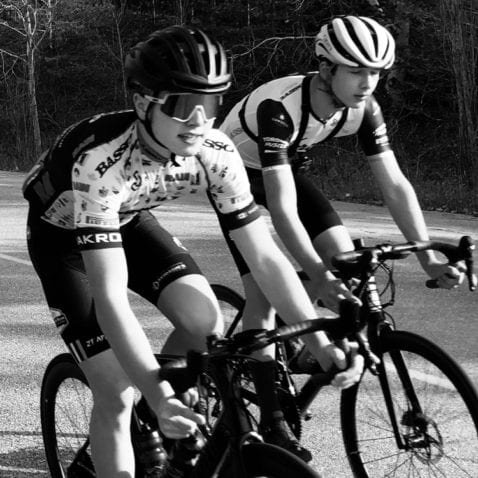 Kevin Simms, who has graduated athletes to contracts with teams like H&R Block, Silber and Floyd’s Pro cycling teams will be heading Toronto Hustle’s U19 Junior program. He says that the team will take an unique approach to try and fill a gap that currently exists in development for Canadian cyclists.

Simms says the lack of exposure and racing repetition at highly competitive events is one of the reasons there are so few Canadians moving through from Junior to U23 and onto the pro peloton. The new team is planning to provide continuous high performance experiences, while racing at events across North America and Europe (pandemic allowing).

When Canadian WorldTour cyclist Alex Cataford heard about the new Toronto Hustle program he saw the potential. “I think that it’s super important,” he says. “The biggest thing we need to do in Canada is get the young riders to races and give them the opportunity to show themselves I think thats how we’ll get these Canadians to rise up to the top.”

Just one week after Houle’s comments, Cycling Canada appointed Richard Wooles as the new road development coach. Wooles will be focusing on a development programming for road athletes from the U17 to U23 age groups.

“Our goal is to create a program that supplements what Cycling Canada does,” says Simms. “We’re not taking away from what they’re doing, but we’re planning to expand on the types of experiences a junior athlete needs in order to progress. We hope to supplement the pool of Canadian junior athletes taking a stab at a career in the sport.” 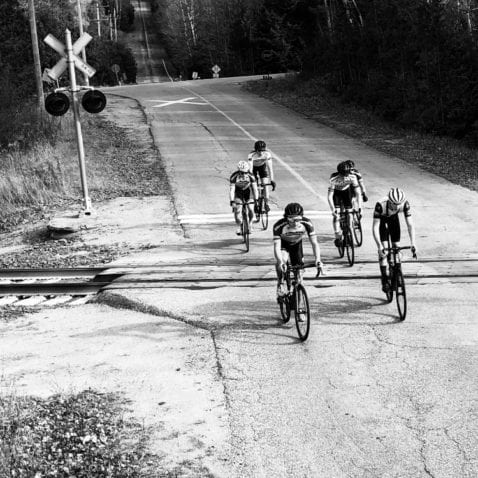 Riders on Toronto Hustle’s Elite Teams come from all walks of life but they are united by their passion for high performance. The Elite men’s team and women’s gravel team include riders with extensive professional experience and palmares, up-and-coming Canadian talent, women who are breaking down barriers and road safety advocates.

Simms says the men’s and women’s teams will act as mentors for the younger athletes. For now, the team will be starting with a small group of U19 men, but it will likely expand to include a women’s team in the future.

A similar program for young female cyclists also popped up in B.C. this moth.

Toronto Hustle’s core mission with the team is to create high performance training and racing opportunities for these Canadian cyclists. “We want to create a smooth and effective pathway for the road racing disciple,” says Simms. “I don’t want to lose junior riders on the start of their journey.”