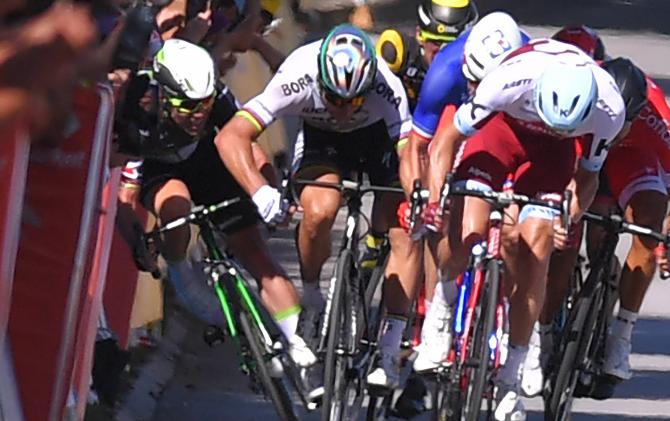 The legal dispute between the UCI and Peter Sagan’s Bora-Hansgrohe team over the world champions disqualification from the 2017 Tour de France have ended. In advance to a hearing before the Court of Arbitration for Sport (CAS) in Lausanne, the two sides reached an agreement in which the UCI admits the wrong decision was made because race footage was not available at the time the decision was made.

The UCI announced that Sagan was not at fault for the crash based on video evidence which was not available to the commissaires at the time of their decision. “The crash was an unfortunate and unintentional race incident and that the UCI Commissaires made their decision based on their best judgment in the circumstances,” read the UCI press released.

Debate ranged, mostly in defense of Peter Sagan, when the race jury decided to kick the world champion and five-time green jersey out of the 2017 edition of the Tour de France. The crash involving Mark Cavendish took place along the barriers in the last 300 m of Stage 4 to Vittel. The incident overshadowed Arnaud Demare’s stage win.

Initially, Sagan was just relegated but two hours after the end of the stage UCI commissaires confirmed that Sagan had been disqualified from the race. Bora-Hansgrohe appealed the decision no avail and when the race resumed the next day he was not on the startline.

“It has always been our goal to make clear that Peter had not caused Mark Cavendish’s fall. This was Peter’s position from day one,” said Ralph Denk, team manager of Bora-Hansgrohe who was pleased with the decision. “No one wants riders to fall or get hurt but the incident in Vittel was a race accident as can happen in the course of a sprint.”

With the matter resolved, the UCI said that it will focus on positive steps that can be taken in the future to prevent such disputes. New UCI president David Lappartient said that starting next season video evidence will be made available to the commissaires panel ahead of a decision being made.

Sagan also comment on the matter saying, “I welcome the fact that what happened to me in Vittel has showed that the UCI commissaires’ work is a difficult one and that the UCI has recognised the need to facilitate their work in a more effective way,” said Sagan. “I am happy that my case will lead to positive developments, because it is important for our sport to make fair and comprehensible decisions, even if emotions are sometimes heated up.”