The UCI’s recent super tuck and forearm-on-bars areo position bans have put the organization’s rules and regulations into the spotlight as of late.

The new position rules are part of the UCI’s effort to increase security measures at races, which include more barrier regulations and recently updated rules to prohibit throwing bottles outside of specified areas.

At 304 pages, the “UCI Cycling Regulations: Part 2 Road Races” document is long and comprehensive. It includes fines and penalties on topics you might expect, such unauthorized feeding and drafting on vehicles, but it also has some interesting tidbits hidden in its depth. Here are a few rules you may not have known about.

1. Riders must wear UCI compliant kit during the podium ceremony

Beyond angering sponsors, if a rider were to show up to a podium ceremony in jeans and a t-shirt they and their sports director could receive a hefty fine.

“1.4 Non-compliant clothing during podium obligations
Rider: 500 fine per rider involved
Sport Director in charge: 500 fine (regardless of the number of riders involved)”

2. Riders getting a push from spectators will receive a fine

Spectators who think they’re being helpful are, in fact, putting the rider at risk of receiving a fine.

3. No mid-race showers for riders

Riders are not permitted the relief of having someone spray them with cool water out of a team car. There are no rules against the riders spraying themselves, so presumably they have to be the one holding the bottle.

4. No mid-race interviews with athletes

Although we would all like to know what riders are thinking during the race, viewers must wait until the end of the event to hear what they have to say. Journalists who attempt a mid-race interview will be kicked out of the event. 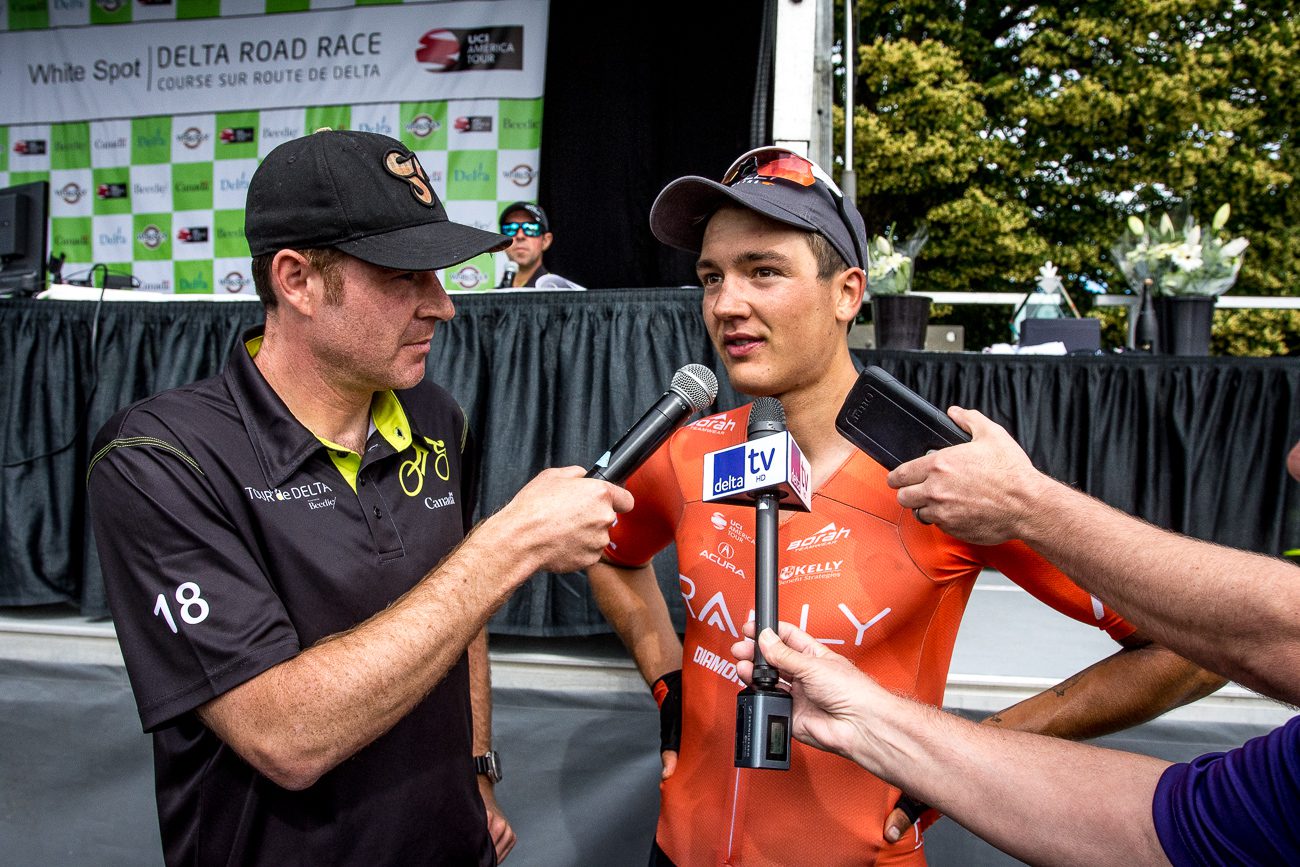 Sports directors may be interviewed, but only before the last 10 km of a race and only from a motorbike.

“6.5 Interviewing a sport director during the last 10 kilometres of a race or conducting the interview from a car rather than a motorbike
Sport Director: 500 fine
Media driver: Exclusion
Journalist: Exclusion
Media vehicle: Exclusion”

5. No dramatically crossing the finish line on foot

Although a rider running across a finish line after a crash sounds like the end of a fun and cheesy sports film, in reality it would end in disqualification. Riders must have their bike with them at the end of the race. That being said, there is a bit of wiggle room in the wording of this rule ( “Crossing the finish line on foot, without his or her bicycle.” Can you cross on foot with the bike? Does that constitute “undertaking part of the race route on foot”?)

“7.5 Rider undertaking part of the race route on foot, or crossing the finish line on foot, without his or her bicycle
Rider: 500 fine and elimination or disqualification”

6. Rain jackets must be transparent, have the same design as the kit or at least say the team name somewhere

Rain jackets have specific rules, as the peloton could get very confusing for officials and spectators when everyone covers their jerseys at once. 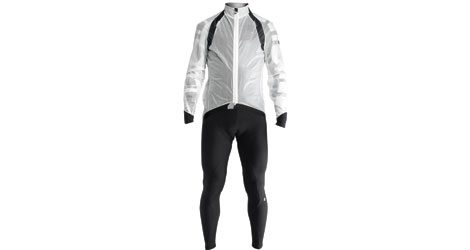 “3.8 Non-compliant rain jacket (different design to that of the standard team jersey or nontransparent material) or team name does not appear on rain jacket
Rider: 500 fine per rider involved
Team: 500 fine (regardless of the number of riders involved)”

As cool as this was, it is, technically, illegal according to the UCI.

“7.6 Use of sidewalks/pavements, paths or cycle lanes that do not form part of the race route
Rider: 200 to 1,000* fine and 25 points from UCI rankings
Furthermore, for stage races, a 20 second penalty and 80%** penalty in the points and mountains classifications”

8. Riders can be fined for behaving indecently towards spectators

Riders who insult or threaten spectators can receive a hefty fine and deduction of UCI points.

“8.2 Assault, intimidation, insults, threats, improper conduct (including pulling the jersey or saddle of another rider, blow with the helmet, knee, elbow, shoulder, foot or hand,
etc.), or behaviour that is indecent or that endangers others
8.2.2 Directed at any other person (including spectators)
Rider: 200 to 2,000 fine per infringement and 10 to 100 points from UCI rankings
Other licence holder: 2,000 to 5,000 fine”

After a long day in the saddle, a long press conference doesn’t sound like the most appealing activity. Unfortunately, cyclists can be penalized for not attending them.

“1.3 Failing to attend official ceremonies (including press conference, etc.)
Rider: 1,000 fine and forfeiture of prizes and points for UCI rankings earned during the race or stage.
Sport Director in charge: 1,000 fine (regardless of the number of riders involved)”

10. Riders must “safely deposit” objects by the side of the road in specified zones

According to the new UCI rules, “Riders may not, jettison food, bonk-bags, feeding bottles, clothes, etc. outside of the litter zones provided by the organiser. The rider must safely and exclusively deposit their waste on the sides of the road in the litter zones provided by the organiser. Riders may not jettison anything on the roadway itself. Riders may also dispose of bottles and clothing to team cars or organisation vehicles or with the team staff in charge of riders’ feeding.”

Next race you watch, look out for riders carefully pulling to the side of the road as they safely deposit their gel wrappers in the litter zones.

The rule does note that in the event of a heatwave these rules may be bent (with the permission of the president of the commissaires’ panel.)

“8.3 Throwing of objects in a careless or dangerous manner onto the road or spectators
Rider or any other licence holder: 200 to 1,000* fine
(the penalty is applied to the team if the licence holder cannot be specifically identified)”

11. No glass objects allowed during races

A crash involving a glass water bottle would be extremely dangerous, as would tossing a glass object like a regular bidon. Presumably the champagne flutes on the last stage of the Tour de France are plastic.

“8.5 Carrying, using or discarding a glass object
All licence holders: 500 fine and exclusion”

12. Riders can be banned from starting if their clothing is too innovative

Clothing such as the controversial Castelli Body Paint 4.0 speed suit, used by Team Sky during the 2017 Tour de France opening stage has been made illegal by the UCI.

“2.5 Use of a technical innovation, innovative clothing or equipment not yet approved by the UCI during an event
Rider: Start refused, elimination or disqualification”

13. No public urination or undressing

This rule is definitely for officials to interpret, as “unseemly or inappropriate behaviour” is very subjective.

“8.6 Unseemly or inappropriate behaviour (in particular undressing or urinating in public at the start or finish or during the race)
Rider or any other licence holder: 200 to 500 fine
Note:The penalty is applied to the team if the licence holder cannot be specifically identified”

14. No touching during time trials, except “in cases of imminent danger”

Neither of these actions are legal, except in cases of imminent danger. 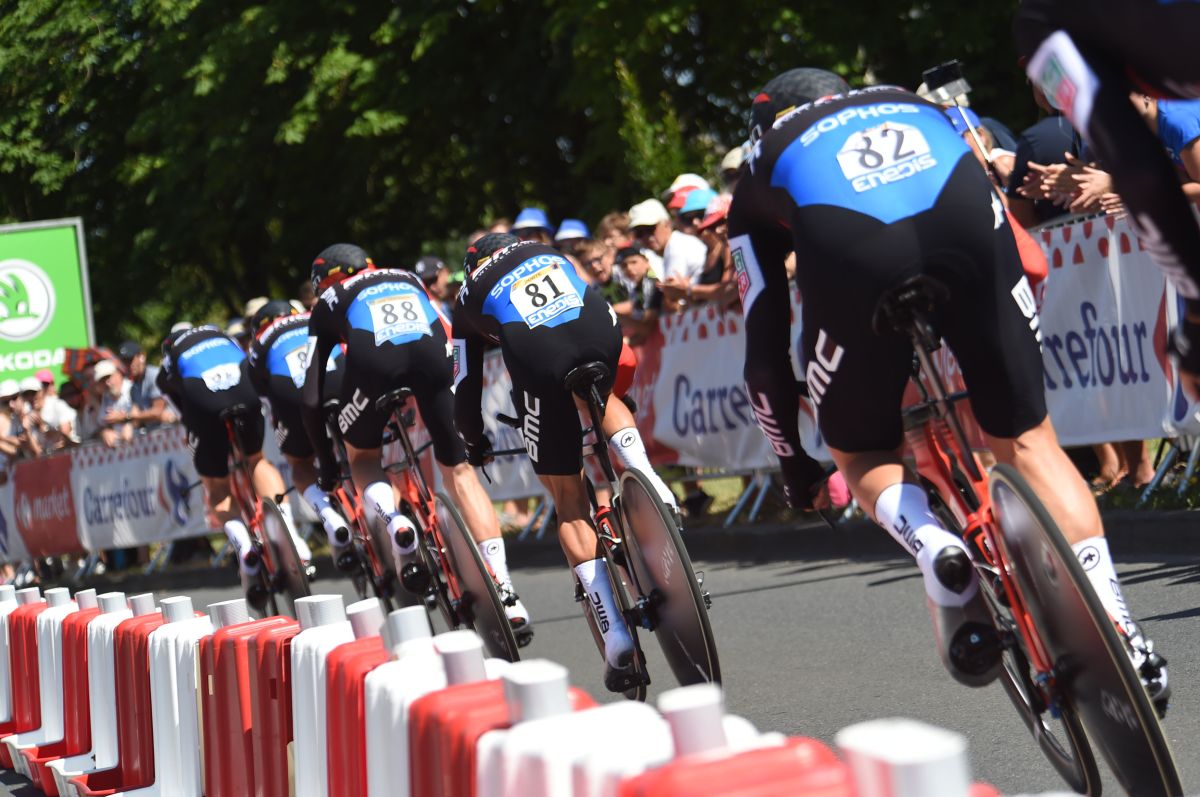 “9.5 Assistance of any kind (nudging [poussette], guiding or pushing) among riders of the same team during a team time trial, except in cases of imminent danger
One-day race Rider: 500 fine per rider involved
Team: 1 minute penalty”

15. Cars in the race caravan can’t be have their windows covered in decals

A very specific rule no doubt put into place when an advertiser got overly enthusiastic.

“2.2.032 Windows on all cars in the race caravan must not be marked as to obstruct the view through the vehicle or be significantly obstructed with decals.”

16. Vehicles need to drive on the correct side of the road

Another specific rule, probably created due to international drivers forgetting the rules of the country.

“2.2.033 Vehicles shall travel on the side of the road required by the domestic legislation of the host country”

Teams must make sure their transceivers aren’t too powerful, or they risk breaking the race radio rules. 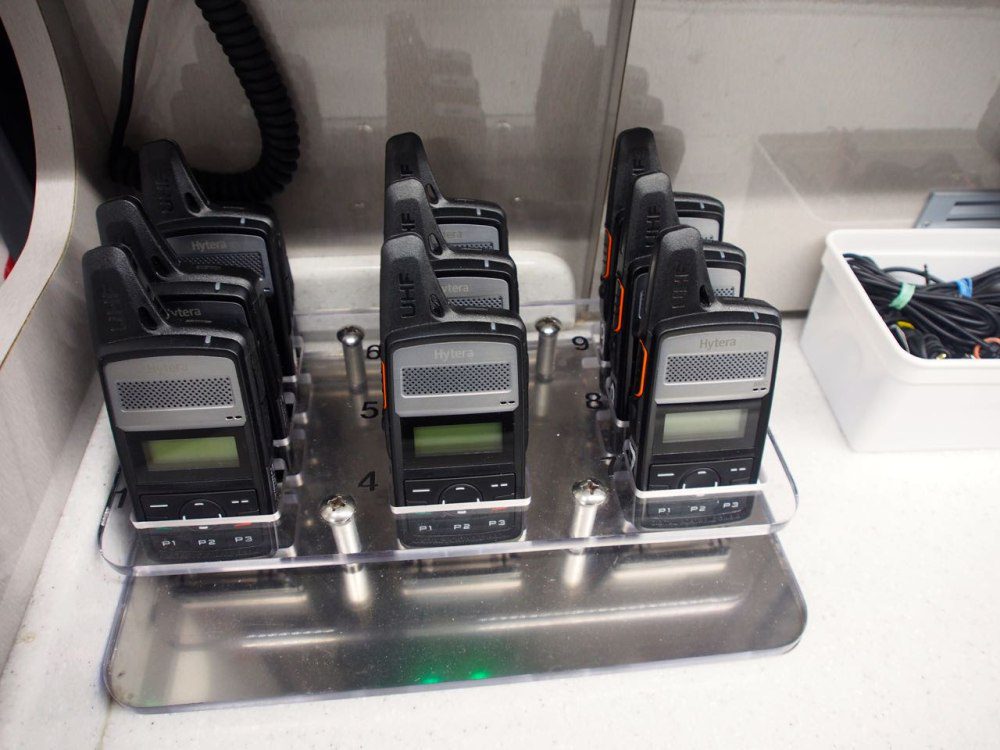 “A secure communications and information system (the «earpiece») is authorised and may be used for safety reasons and to assist riders under the following conditions:
– the power of the transceiver may not exceed 5 watts;
– the range of the system shall be limited to the space occupied by the race;
– its use is limited to exchanges between riders and the sports director and between riders of the same team.”

18. As of January 2022, inflatable structures will only be allowed on the start line of a race

In news Adam Yates is no doubt pleased about, the UCI is three years into its five year plan to gradually phase out inflatable structures at races.

There are strict bans on specific sponsorships—a team full of adult film actors and industry members was banned by British Cycling in 2019. That being said, according to the UCI spirits are classified as beverages with an alcohol content above 15 per cent, so beer and (most) wine sponsorships are still permitted.

“Without prejudice of the applicable law, no brand of tobacco, spirits, pornographic products or any other products that might damage the image of the UCI or the sport of cycling in general shall be associated directly or indirectly with a licence-holder, a UCI team or a national or international cycling competition.

As defined in the present article, a spirit is a beverage with a content in alcohol of 15% or more.”