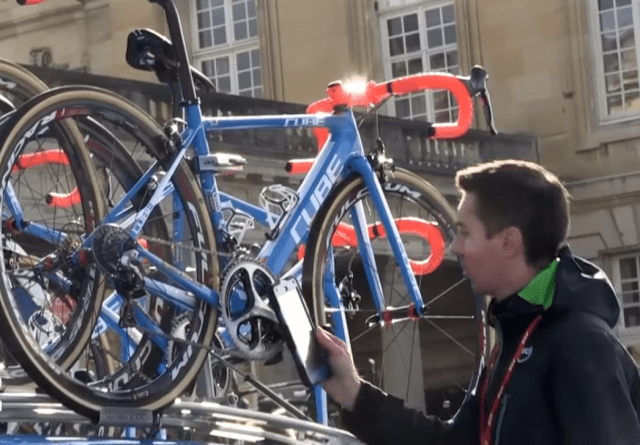 The effectiveness of the technology the UCI having been using to safeguard against motorized cheating has been called into question by a recent report by French, Italian and German journalists. Italian newspaper Il Corriere della Sera, French television program Stade 2 and German television station ARD managed to get their hands on one of the UCI tablets that is used to search for hidden motors in bikes and were able to conduct some revealing tests on it’s effectiveness. The UCI has been using tablets to conduct checks for motors on bikes since 2016.

RELATED: Mechanical doping used in pro races according to investigation

No riders have ever been caught with a motor using the UCI’s technology. Femke Van den Driessche was found to have a hidden motor in her bike at the cyclocross world championships in 2016 and an Italian amateur allegedly had a motor in his bike at a race but neither discovery was the result of the technology the UCI deploy. Since then, the UCI say they have conducted an estimated 42,500 checks with their tablets at the biggest races on the professional calendar.

According to the report, the UCI use an Apple iPad mini that uses a third party magnet which as a trasnmitter and receiver. The tablet uses software developed by Endoscope-i, a company based in Birmingham, U.K. who according to the report have no specialties in detect such things as motors. The setup is suppose to be able to alert testers of the presence of magnetic flux density of hidden motors or magnetic wheels. The UCI have been encouraging national federations to purchase the technology according to Il Corriere della Sera.

The device that was obtained was brought to the Fraunhofer Institute for Nondestructive Testing in Saarbrucken, Germany. The vice-director of the institute Bernd Valeske first tested the devices ability to detect a motor like the one discovered in Van den Driessch’s bike.

While the iPad device was able to detect the magnetic field where the motor was hidden, there were also false positives in three other places on the bike. While that would usually prompt further investigation, a WorldTour mechanic explained to Il Corriere della Sera that he has never seen the UCI dismantle a bike. UCI testers just scan the frames with the device.

At the same time the riders await the podium presentation, the UCI pulls the top rider bikes and once again scans them. pic.twitter.com/5KpJi1qarI

The piece in Il Corriere della Sera concludes that the UCI’s tests are insufficient and out-dated. “The wheel is ‘perfectly clean’, at least for the tablet. However, the X-rays instead show the induction plates and the transmission cables, perfectly hidden by carbon,” writes Marco Bonarrigo. “The wheel that transforms the bike into a motorbike is, for the UCI controls, a piece of inert fibre.”

The piece also notes that UCI president Brian Cookson refused to meet with the journalists to comment on the efforts being undertaken to prevent motorized cheating. However, David Lappertient who will be challenging Brian Cookson for the presidency when the federations gather to vote in two weeks at the world championships said the UCI needs to improve testing. He suggested that preventative testing needed to be expanded and all bike or wheel changes undertaken in races needed to be meticulously monitored.