Greg Van Avermaet’s season high mark came Sunday at the Grand Prix Cycliste de Montréal where he took his second win, his first in 2016. CCC’s Belgian vet was the fastest out of a group of 20 finishing on the Avenue du Parc. Michael Woods, fresh off his best ever Laurentian Classic result at the Grand Prix Cycliste de Québec, beat that mark by nine places while coming eighth.

The peloton would face 18 laps of a tough, 12.2 km circuit, each containing three climbs: Côte Camillien-Houde (1.8 km of 8 percent), Côte de Polytechnique (780 metres of 6 percent) and Avenue du Parc (560 metres of 4 percent). At 219 km, it was a bit longer than the race in Québec and almost 25 km longer than last season’s edition. 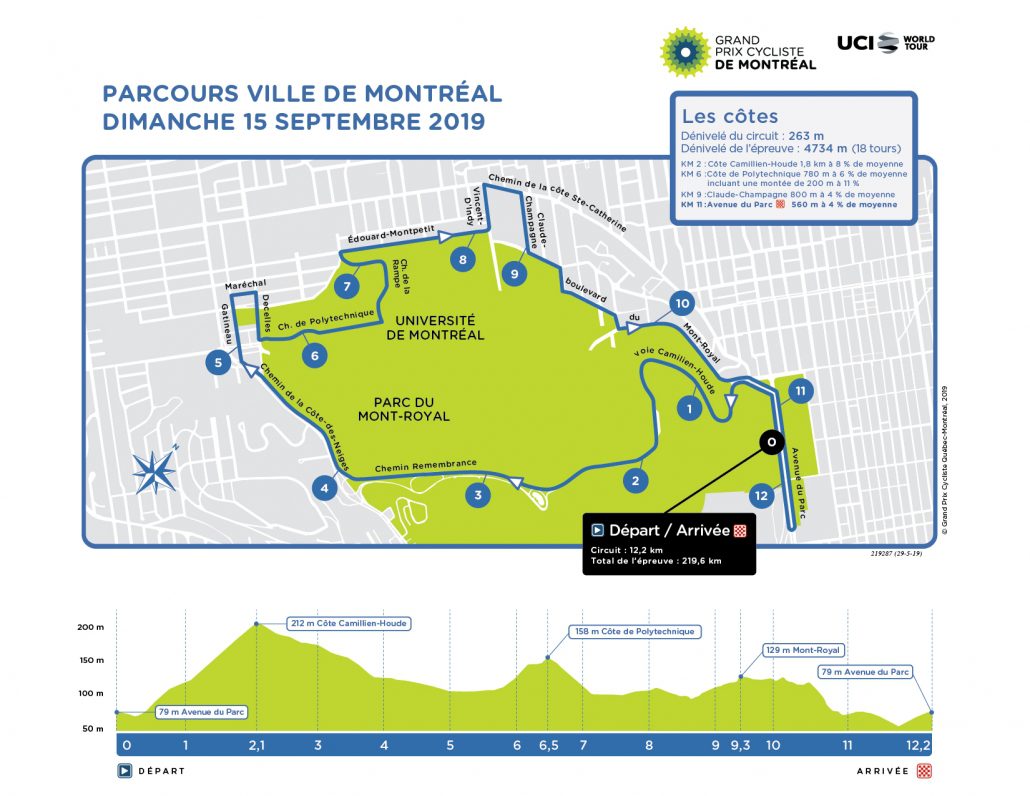 It would be legendary Canuck Svein Tuft’s last hurrah before retirement.

The storied pro career of Svein Tuft comes to a close here in Montreal today but the legend will life on in Canadian cycling lore for a long time to come #GPCQM pic.twitter.com/9jJrOkPgFF

Montréal favourites were four of the top seven on Friday in Québec.

Sunday’s breakaway had more Canadian content than Friday’s, with Matteo Dal-Cin and Ryan Anderson from Rally and Charles-Étienne Chrétien and Nick Zukowsky from Team Canada. Zukowsky gobbled up the King of the Mountain points during the day.

⏰ Two laps completed for the peloton and 8 minutes for the five man break of which FOUR are Canadians 🇨🇦 #GPCQM @CyclingCanada pic.twitter.com/bh7phfTHlH

By the 14th lap Zukowsky was the lone survivor, only 45-seconds ahead of the peloton. Several riders like Remco Evenepoel, Vincenzo Nibali and Dan Martin had tried to get away from the Jumbo-Visma led bunch, but Trek-Segafredo covered.

Heading into the penultimate lap, Israel Cycling Academy rider Nathan Earle bolted off the front, Astana and Movistar fellows accelerated at the pointy end of the peloton, but Sunweb controlled. A Nan Peters dig on Camillien-Houde drew Woods to the fore. A split in the group led to Benoît Cosnefroy attacking on Côte de Polytechnique and Tim Wellens and Enric Mas chasing.

Peter Sagan bridged over to Wellens and Mas on a downhill section. With Cosnefroy within grabbing distance and 3 km to race, Alaphilippe flashed away and nabbed the AG2R rider. But a group of 20 racers gelled within sight of the red kite.

Van Avermaet was the fastest into the headwind, Diego Ulissi the runner-up and Iván García Cortina (Spain/Bahrain-Merida) the surprise third.