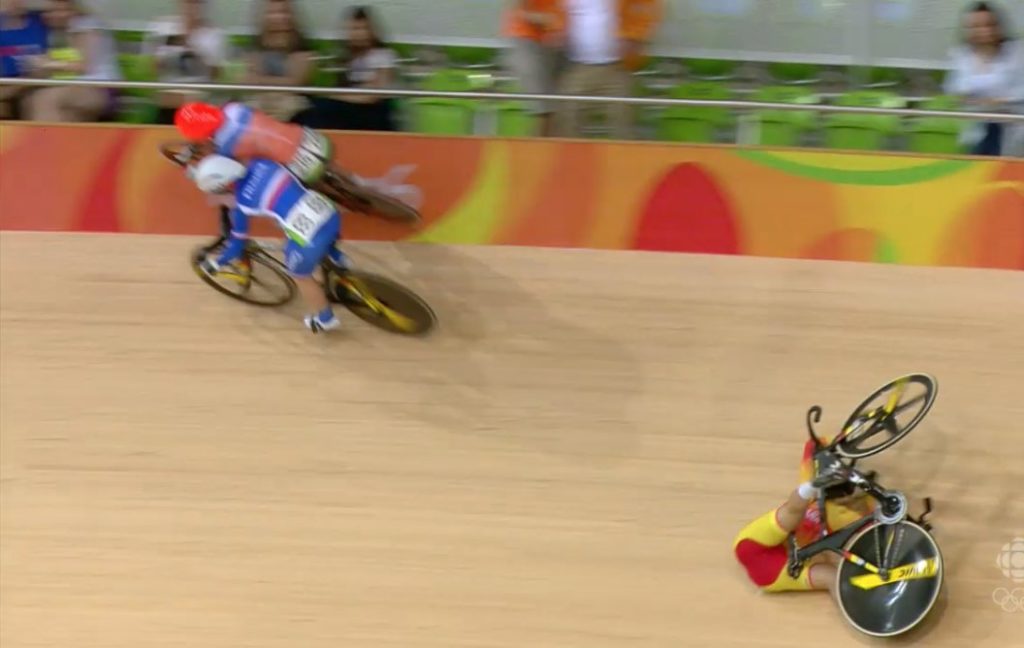 RELATED: Ikea’s assemble-it-yourself urban bicycle coming to a store near you

Laurine van Riessen was racing in heat 2 of the first round of the women’s keirin when she used her bike handling skills to ride up onto the wall of the Rio velodrome in order to avoid going down in a crash. Olivia Podmore of New Zealand, Virginie Cueff of France who was trying to find space to pass and Tania Calvo Barbero of Spain were all involved in the heat two crash but amazingly van Riessen was able to avoid going down leaning heavily on the French rider as she rode up onto the wall of the velodrome.

Calvo and Cueff appeared to touch wheels in the race with the Spaniard along with Podmore to crash heavily and causing Cueff to swerve into van Riessen. The two headed for the wall of the velodrome and with some amazingly bike handling skills and perhaps some luck the Dutch rider was able to amazingly stay up and finish the race finishing last in the heat.

No doubt Keirin is always very spectacular… Fortunately no one was injured after that crash #CyclingTrack #rio2016 pic.twitter.com/AfOiL1kSSz

Wai Sze Lee of Hong Kong and Tianshi Zhong of China advanced in the heat with Daria Shmeleva of Russia, Van Riessen, Calvo, Cueff and Podmore heading to repechage.

Van Riessen competed for the Netherlands at the 2010 Winter Olympics in Vancouver and is an Olympic bronze medalist in the 1000 metre race.