Sanne Cant dominated the women’s race at the Superprestige opener in Gieten on the lakeside course in the Netherlands. The 25-year-old Belgium rider of the Enertherm – BKCP team won 26 seconds ahead of Rabobank – Liv’s Lucinda Brand while Sophie de Boer of the Kalas – NNOF team finished in third, 58-seconds off the winners pace.

In the men’s race, Mathieu van der Poel—in his first race back after knee surgery—took a thrilling win in a head-to-head battle with world champion Wout Van Aert. Van der Poel, missed considerable time in 2015 and the first two World Cup races in the U.S. of 2016 because of injuries. Van Aert, 22, who is also Belgium champion and van der Poel, 21, the Dutch champion, were locked in a race long duel for the win. Van der Poel seemingly had the edge in the courses sandy sections but was unable to shake his rival who upped the pace on the courses climbs. 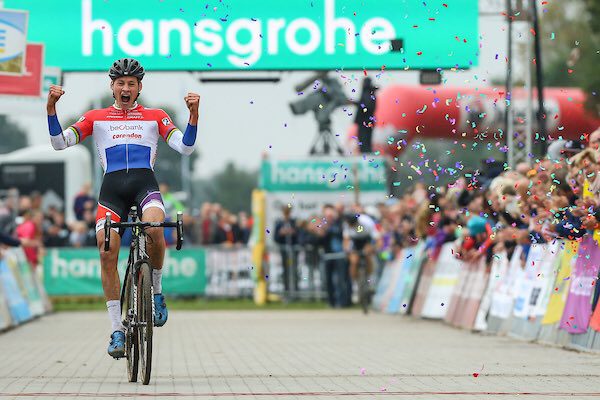 After dominating the World Cup races in Las Vegas and Iowa, Van Aert could not shake van der Poel and in the finale, the two were dismounted sprinting through the final sand pit before the finish line. When Van Aert remounted he slumped in disappointment as a drop chain took him out of contention leaving van der Poel to take a triumphant win in his return to racing. Laurens Sweeck rounded out the top-three. The 22-year-old briefly made contact with the leaders but was unable to match their furious pace. Expect more thrilling races throughout the season between the youngsters who are proving it is a fantastic time to be a cyclocross fan.

The next Superprestige event is on Oct. 16 in Zonhoven. Watch highlights from Gieten at rtvdrenthe.nl

At the Thompson Speedway Motorsports Park in Connecticut, 12-time American national cyclocross champion Katie Compton (KFC Racing powered by Trek/Panache) of Colorado Springs took a comfortable victory ahead of Ellen Noble (JAM Fund/NCC) and Rebecca Fahringer (Amy D. Foundation). Canadian under-23 cyclocross champion Ruby West of Dundas, Ont. was the top Canadian finishing in 10th and third in the under-23 standings in the C1 race.

Last year, Stephen Hyde (Cannondale powered by CyclocrossWorld) finished second at KMC Cross Fest. He bettered that result in 2016 taking the win on the course that was made slippery by light rain, especially on the off camber sections on the courses backside. Vermont native, Jamey Driscoll (Raleigh/Clement) took second place while Kerry Werner (Kona) narrowly edged out Curtis White (Cannondale powered by CyclocrossWorld) for the final step on the podium.