My beloved ex-roommate, who I do not resent at all for moving out, used to get up with me at 5 a.m. two to three mornings a week for group rides. Upon leaving me and moving to the mainland, Nick found that the booming metropolis of Vancouver was lacking in the early morning group ride department. 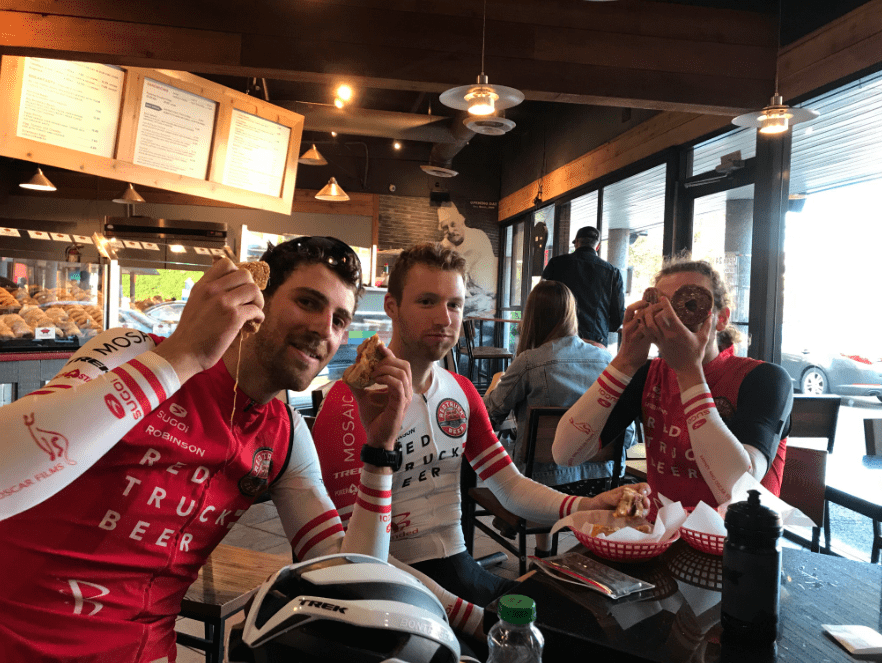 Nick took it upon himself to introduce some of Victoria’s Tripleshot group ride culture to the big city, and set out creating the Bagel Ride.

Now, the bagel component is a personal touch of Nick’s, who is a fan of all things toasted, especially if they’re round and have a hole in the middle, as it happens.

The bagel ride meets at 6 a.m. at Siegel’s Bagels (1883 Cornwall Ave) for a prompt 6:02 am rollout. A mellow ride across the Burrard St. Bridge and then along the water to Stanley Park serves as a warm-up before things get spicy in the park.

With very little traffic at this time, the group can safely hammer through the park for four laps. On the second lap, there’s a sprint after the descent, and on the final lap the group races to the top of the climb. The ride ends with a gentle cooldown back to Siegel’s where riders can purchase a very reasonably priced recovery bagel.

Each new recruit takes the standard Bagel Ride rookie photo with the rider peaking through their bagel’s hole.

Not by coincidence, one may notice that on Strava, the line created by the park laps is similar in shape to a bagel.

My understanding is that Nick and his good friend Sam were the OG Bagel Riders. Over the winter, it was mainly just the two of them, but with earlier sunrises and warmer weather, the ride took off in the spring. I believe that, so far, the record attendance has been 14.

I’ve only made it to one Bagel Ride, but not for lack of trying to make more. I had plans to fly Harbour Air from Victoria one day to get some course recon in from above while saving the legs, but the fog kept me grounded. Another time I fell ill before trekking across the pond for the ride, and on yet another date I tried to make it home from my road trip up the coast in time for the ride, but found myself a day late. I made sure to make my mark on my eventual attendance.

My much anticipated Bagel Ride debut was officially announced on the Bagel Ride Instragam the day before, with a caption that read: “This guy, @olibollyoli, makes his debut at the Bagel Ride tomorrow. As a known group ride crusher and weekend warrior on the island, let’s see if we make him hurt tomorrow.” I needed reinforcements.

This guy, @olibollyoli, makes his debut at the Bagel Ride tomorrow. As a known group ride crusher and weekend warrior on the island, let’s see if we make him hurt tomorrow.

Red Truck teammates AFM and Brendan joined me on my first Bagel Ride two weeks ago, which was a feat in itself because I don’t think Brendan knew his alarm could go off so early. The two were sure to lead me out for the sprint and AFM won the climb at the end. We also secured the title as fastest Bagel Ride to date, securing the KOM for four laps of Stanley Park.

Oliver Evans 20-year-old cyclist from Winnipeg, currently living in Victoria. In 2019, he is racing for Trek Red Truck Racing.