You know that sense of perfect balance and flow that happens on some rides, when the delight of the scenery is matched by the pure joy of the physical act of cycling – of body moving through space? It’s more than being in the zone. It feels like getting away with something, like going through a door no one else can see. I’ve found some version of that feeling in all kinds of settings: riding the Jem Trail in Utah, on a Sunday road ride in the Thousand Islands and pedalling a cranky rental bike around the Danish island of Bornholm. I tapped some of that bliss this past summer on Ontario’s Bruce Peninsula.

I was riding two feet from the turquoise water of Georgian Bay, on the other side of a washout on Cabot Head Road, perfectly, breathlessly alone, with nothing but the sound of tires crunching gravel and the lapping waves. Just breathing the air felt like a privilege.

I hadn’t planned to make the trip up the peninsula this past summer. In fact, had COVID not slammed us, I would’ve been cycling around Japan’s Mount Fuji at that very moment. With those plans off the table, I decided, like many of us did, to spend the summer exploring closer to home. My rules were: no plan, no expectations, just ride. The Bruce Peninsula was at the top of my list.

Summer 2020 was set to bring a heap of cyclists to the Bruce Peninsula: the Great Waterfront Trail Adventure was mapped from Blue Mountain Village northwest to Tobermory and then south to Southampton. The Bruce Peninsula Gravel Gran Fondo, which launched in 2019, drawing close to 300 cyclists to the area around the town of Lion’s Head, promised to be bigger and better, with a new 115-km gravel route. The pandemic shut it all down.

Cycle tourism in the Bruce Peninsula

The events would’ve drawn hundreds of wheels to a region that isn’t sure it wants to be a cycling destination. While Manitoulin Island and the area around Southampton have built up some cycling infrastructure and tourism offerings to match, the Bruce Peninsula hasn’t made the same bet. There’s plenty of infrastructure for mountain bikers – the Lindsay Tract and the Mountain Bike Adventure Park are just two – but attracting cycling tourism hasn’t been a focus.

I spoke to Megan Myles about it. Myles is a councillor in Lion’s Head. She said there’s an active conversation happening in the region about what types of tourism it wants to attract. The peninsula struggles with a summer influx of day tourists who drive up from the Greater Toronto Area to visit Bruce Peninsula National Park, the Bruce Trail and Tobermory, but spend little money locally, and leave a lot of waste behind. The tourists place a significant burden on the area’s limited resources. Officials want to build up a sustainable tourism industry driven by people who’ll stay awhile, spend money and tread lightly. Cyclists could be part of that plan.

Mike Campbell lives in Lion’s Head and bikes roughly 6,500 km on road and gravel each year. He founded the Bruce Peninsula Gravel Gran Fondo more than two years ago. When I spoke with him this past summer, he estimated there were six times more cyclists than usual on area roads. “I’d say the community here is still in its infancy,” Campbell said. “There are no clubs per se. It’s pretty well people getting together informally. But we have some pretty spectacular riding here. Other than Highway 6, there’s almost zero traffic. You can really enjoy the cliffs of Georgian Bay and the turquoise water and hillier terrain on one side of the Bruce, and then pedal your bike 20 km and you’re on the flatter Lake Huron side, with sand beaches and islands and sunsets.”

Campbell didn’t mention the wind, which is a factor, gusting so strongly that it sometimes feels as if it’s trying to send you back to where you came from. If you can make your peace with that, start planning your trip. Here are four reasons to give the Bruce Peninsula a try. 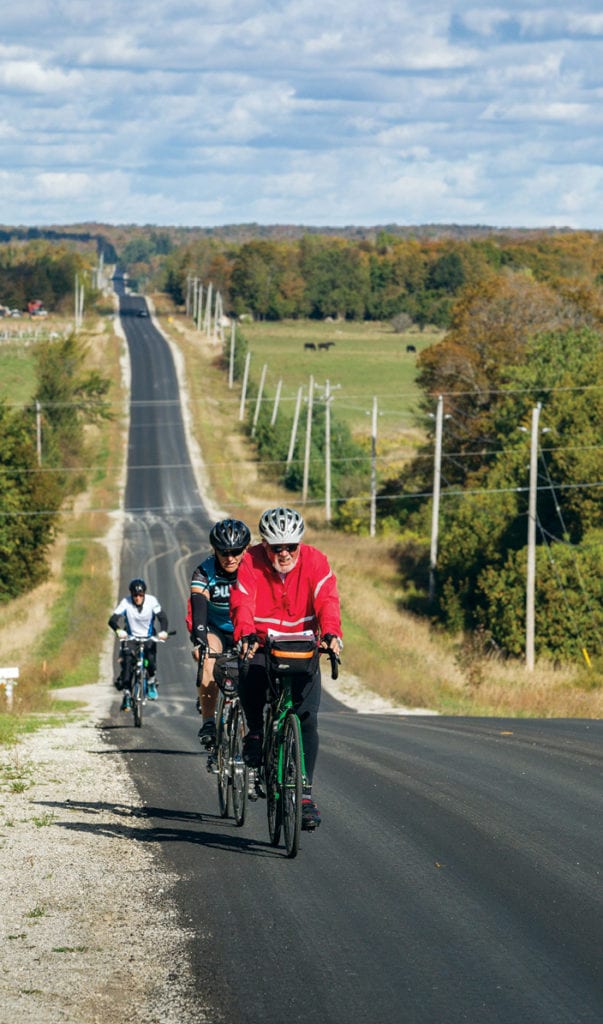 I kicked off my explorations with the must-ride 75-km Lighthouse to Lighthouse Gravel Gran Fondo route to the Cabot Head Lighthouse. The route starts in Lion’s Head and heads north up the east side of the peninsula, hugging the coast for a bit, pitching out on dirt and gravel roads through farmland, and featuring a bit of hike-a-bike on the Bruce Trail. I pedalled past the quaint waterfront homes and cottages along Dyers Bay to Cabot Head Road – closed to cars in 2020 – which took me 11 km north to the tip of the peninsula and the lighthouse. Nothing but big-bay energy up here, with those signature turquoise Georgian Bay views. It’s enough to make you kiss your bike.

Did I mention it gets windy up here? Leaving from Lion’s Head, I headed south on County Road 9 to Barrow Bay Road and Little Pike Bay Road, which took me west across the peninsula toward Lake Huron. I fought 35 km/h wind gusts most of the way. No bliss here, but at least there was no one around to hear me swearing. Once on the Huron shores, I followed the Waterfront Trail north through the cottage subdivisions that are expanding here, hunting for swimming spots. I found a few, but the water was so angry that I decided against jumping in. I took Stokes Bay Road north to Black Creek Provincial Park and watched some kids surfing before heading east and then south on busy Highway 6’s cracked and barely rideable shoulder. The views on this side aren’t as impressive as those on the Bay side, but there are lots of little treasure spots to uncover. The word on the street is that the Ministry of Transportation is paving the shoulder all the way up to Tobermory but I didn’t see any evidence of that on this trip.

Found bliss again on a 60-km loop from Wiarton on Grey County Road 1. The well-paved and wide-shouldered road follows the 11,000-year-old Georgian Bay coast, serving up spectacular views of the water and the Niagara Escarpment’s rock formations between the monster cottages that line the shore. My bliss moment wasn’t real estate-driven, though – it was spurred by a breathtaking descent that gave the illusion, just for a moment, that I might plunge right into the Bay. It reminded me of some of the long, stunning descents you get on the Cabot Trail, albeit at far lesser grades. It was one of those moments when you have to stop and take a mental picture so you can commit it to memory forever.

Doing it for the Snacks

My final ride was an out-and-back from Sauble Beach, on the southwest side of the peninsula, north to Pike Bay. Someone tipped me off that the general store in Pike Bay makes a mean breakfast sandwich, and that’s as good a reason as I’ve ever heard to ride someplace. I rode along the Lake Huron shore from Sauble Beach’s touristy waterfront to Sunset Drive and into the quaint little town of Pike Bay. The reviews weren’t exaggerated: it was a damn good sandwich. Here I met the most cyclists, including a handful of people riding north from Southampton, where there’s a substantial bike community.

Former pro cyclist, cycling advocate and writer Laura Robinson lives in Saugeen Shores, near Southampton, has spent years cycling the peninsula, and summed up why she loves riding here: “It’s a very rugged part of Ontario. You can really see that the glaciers scraped through here and left a lot of scrub farmland. It makes it really interesting to look at the geology as you’re riding. This area doesn’t necessarily have a bucolic beauty, but that’s why I like it.” 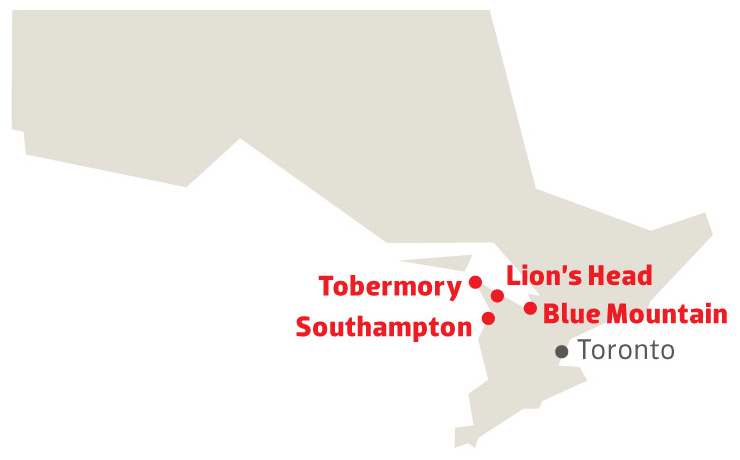 July and August are good bets weather-wise, but prepare for lots of tourist traffic. The September shoulder season is quieter, but some businesses shut down after Labour Day.

The only way to get to the peninsula is by car. There’s no train service or shuttles.

Use Lion’s Head as your home base and loop out from there. The Fitz Hostel (thefitzhostel.com) is a cosy and affordable spot run by councillor Megan Myles. There are also plenty of Airbnb options to choose from. If you’d rather camp, Lion’s Head has a small waterfront municipal campground, but the better camping is north at Bruce Peninsula National Park.

Lion’s Head doesn’t have the culin-ary options you might expect from a tourist hot spot. There are lots of small fish-and-chip places on the main drag in Lion’s Head, and the Taste Kitchen (thetastekitchen.ca) has good sandwiches and other options. The Foodland grocery store often has fresh-caught fish. You’ll find more restaurants in Tobermory, but expect to pay tourist prices during in-season.

Things to do off the bike

Rent a kayak or paddleboard from Thorncrest Outfitters (thorncrestoutfitters.com) and paddle Georgian Bay or lakes in the area, climb the cliffs around Lion’s Head, hike the Bruce Trail, or explore Tobermory’s grottos and Fathom Five National Marine Park.

To explore more of the region, bring a gravel bike. Also, there are no bike shops on the Bruce Peninsula. The closest ones are in Owen Sound or Southampton.