story and photos by Matthew Kadey

I’m in a pain cave, albeit a ridiculously beautiful one. We are inch-by-inch making our way up another absurdly steep and rutted Costa Rican road that knows no mercy. With temps hovering around 35 C, I’m sweating as if I’ve been locked in a sauna. 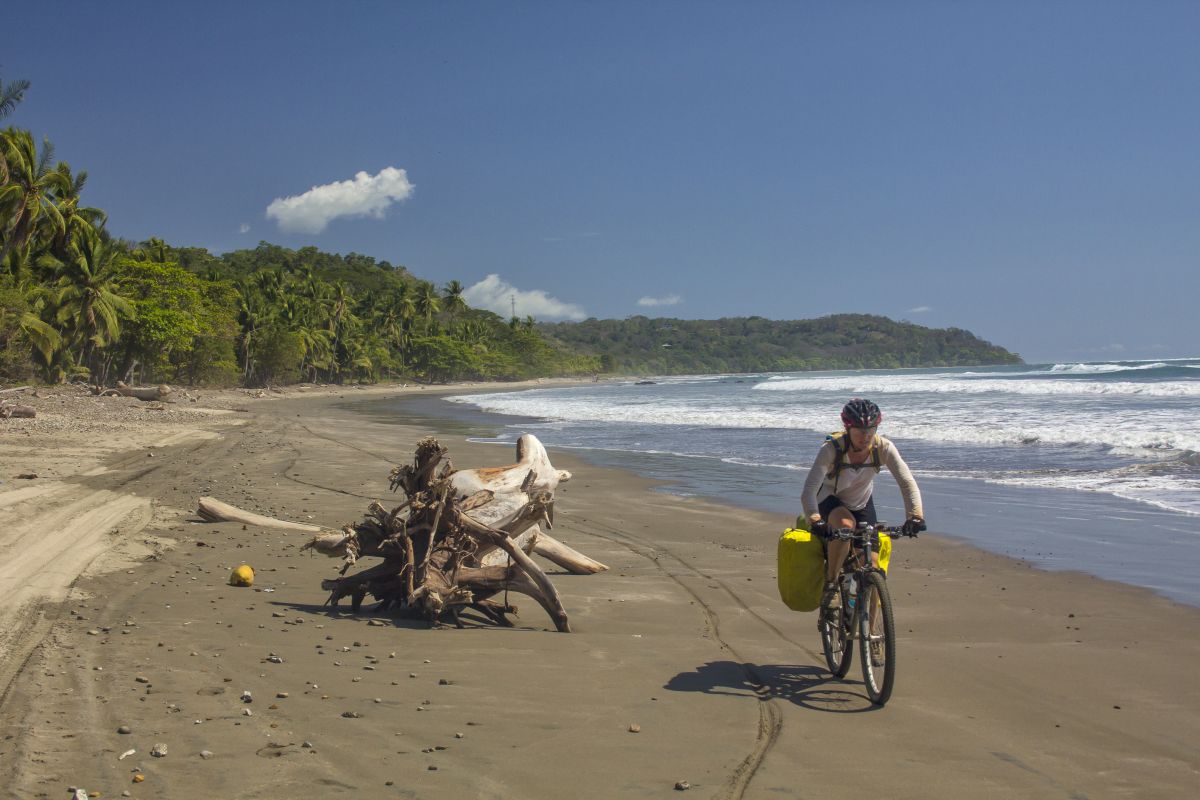 Tabi has skidded out and is now slumped over her loaded-down bike putting in a Herculean effort to push up this 16 per cent grade. A yellow-bellied kiskadee belts out its kis-ka-dee call almost to cheer us on. We are surrounded by densely forested hills. On the other side of this hump is a delicious spread of unspoiled beaches. Yes, Costa Rica’s Nicoya Peninsula is a cycling paradise, or hell, depending on your state of mind at any given moment.

Jutting out into the Pacific from the northwest of Costa Rica, the roughly 130-km-long Nicoya land mass is best known as a destination for beach lovers and surfers wishing to catch a wave. But now a steady stream of bikepackers are venturing here to gain a deeper connection to this land by tackling the abundance of lightly trafficked dirt roads, one slow pedal stroke at a time.

For the most part, Costa Rica has not witnessed the dark days inflicted on many other Latin American countries by the drug trade. Democratic and fairly prosperous, Costa Rica famously abolished its military in 1948 with funds then redirected from purchasing guns to school books. The country has a reputation for peacefulness and mind-boggling biodiversity. My partner, Tabi Ferguson, and I wanted to come to the Nicoya for our own version of ecotourism – beach hopping by human power on our mountain bikes. 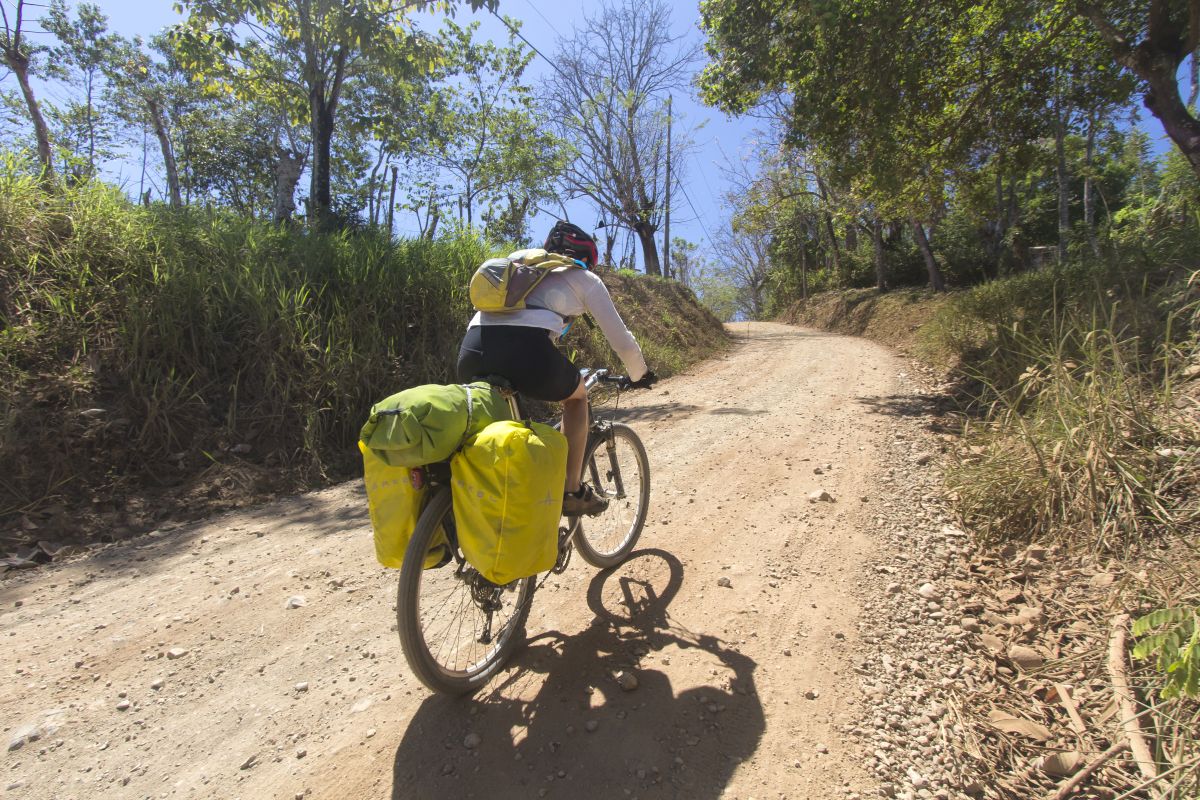 Our head units might seem like digital creep, but they make it a lot easier to discover some of the Nicoya’s best deserted side roads, such as the path that takes us south to the beach resort town of Montezuma. In the bush, shaggy howler monkeys, males with their unnerving rasping gorilla-like bellows, seem to be having a much easier time leaping between trees than we have tackling the punishing inclines. In a land that is so easy on the eyes, we learn that it’s important not to have tunnel vision when you’re putting in a Sisyphean effort to keep your wheels moving forward.

The most brag-worthy ride of our trip takes us from Montezuma, and its hippie beach culture, to the western side of the Nicoya. Among the bounty of photogenic highlights are the rugged coastline, a massive strangler fig tree that makes my bike look like a Happy Meal toy, lung-busting climbs followed by sketchy downhills, foot-soaking river crossings that are mercifully too shallow to hide crocodiles and an exhilarating stretch of beach riding where Tabi and I are able to trade in a hilly, dusty inland option for pedalling on hardpacked sand where our only other company is the pounding surf and a few crabs darting into their holes. Just a few puffy clouds populate a perfect bluebird sky.

Later on, from a tree in a front yard, an elderly Costa Rican – or tico – plucks several star fruits that I then stuff gleefully into my pannier. National Geographic has identified the Nicoya as a Blue Zone, a region of the planet that produces an especially high rate of centenarians. Clean air, lush surroundings, a frequent playlist of birdsong and a healthy dose of beans are surely a recipe for longevity. 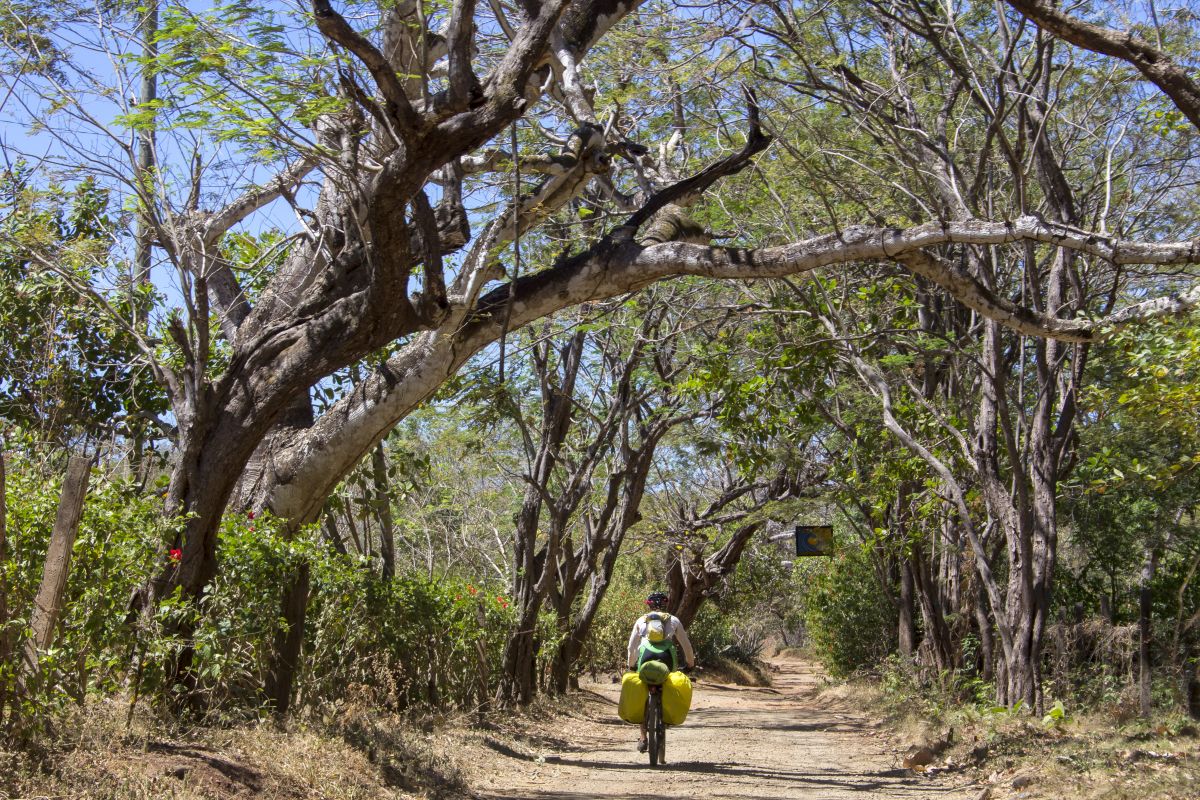 Costa Rica intends to become the first carbon-neutral nation via several initiatives, which include continuing to nurture its forests. So when it comes to tree-loving avian life, the country has an embarrassment of riches. From the fetching blue-crowned motmot with its distinctive pendulous tail to the brightly plumed gartered trogon, each day we seem to ride among birds that are new to us. I’m glad I had room for binoculars in my panniers.

As we make our way up the west coast, the road has more washboard bumps. This is not a land for roadies perched on featherlight carbon who want to put the hammer down. No, amigos, the Nicoya’s dearth of pavement and angry topography demands that you bring a mountain bike. Expect to move at a moderate pace, especially if you’ve forgotten to pack your climbing legs.

The abundance of sublime beaches on the route to the oceanside town of Puerto Currillo offers plenty of opportunities to rest our weary limbs. For every beach on the Nicoya that has been sullied by ever-encroaching bland mega-resorts, there seems to be a dozen, such as Playa Coyote, Playa San Miguel and Playa Corozalito, that remain largely unspoiled and blissfully ungentrified. Simply pedal down a dirt road where butterflies outnumber cars toward the ocean, and you’re bound to find yourself staring at a stress-busting, coconut palm-lined beach free of footprints that can be a tranquil place to pitch a tent.

Nicoyans are very proud of their many beaches, which shows in how relatively spotless they are owing to frequent community cleanups. So when we stumble out of our tent well before the sun has awakened to walk along Playa Ostional and we gawk at olive ridley sea turtles lumbering ashore to lay their eggs in the sand, we aren’t navigating around plastic bottles and old toilets. Weighing as much as 100 lb., adult turtles return year after year to the same beach where they hatched many years before. It appears that the turtles are moving faster than what we can manage up some of the near-vertical climbs.

Most of our rides require calorie gluttony to replace spent energy reserves. Thankfully, there are many local restaurants to appease our growling tummies with tasty casado , a hearty medley of rice, beans and meat. Fresh fruits, such as pineapple, mango and the curious granadilla, are always nearby to provide a refreshing snack. 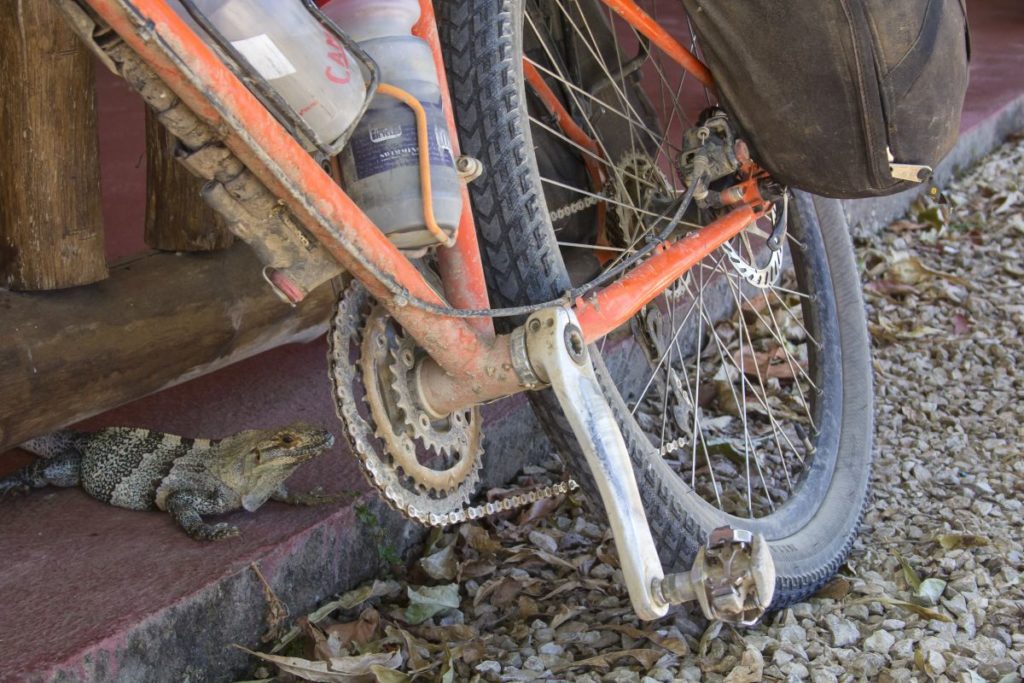 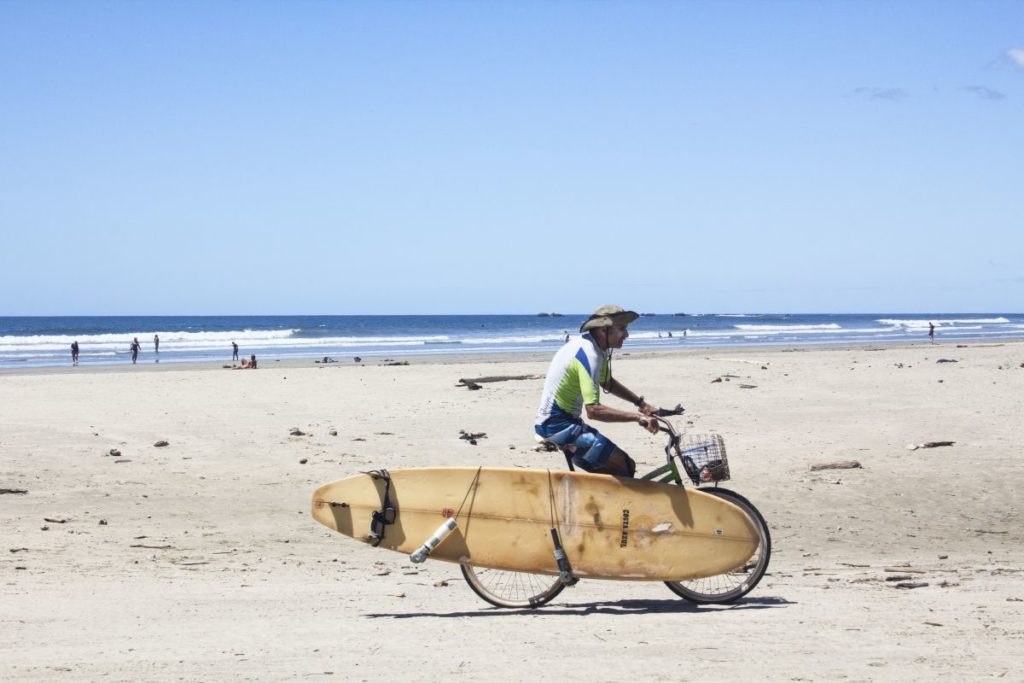 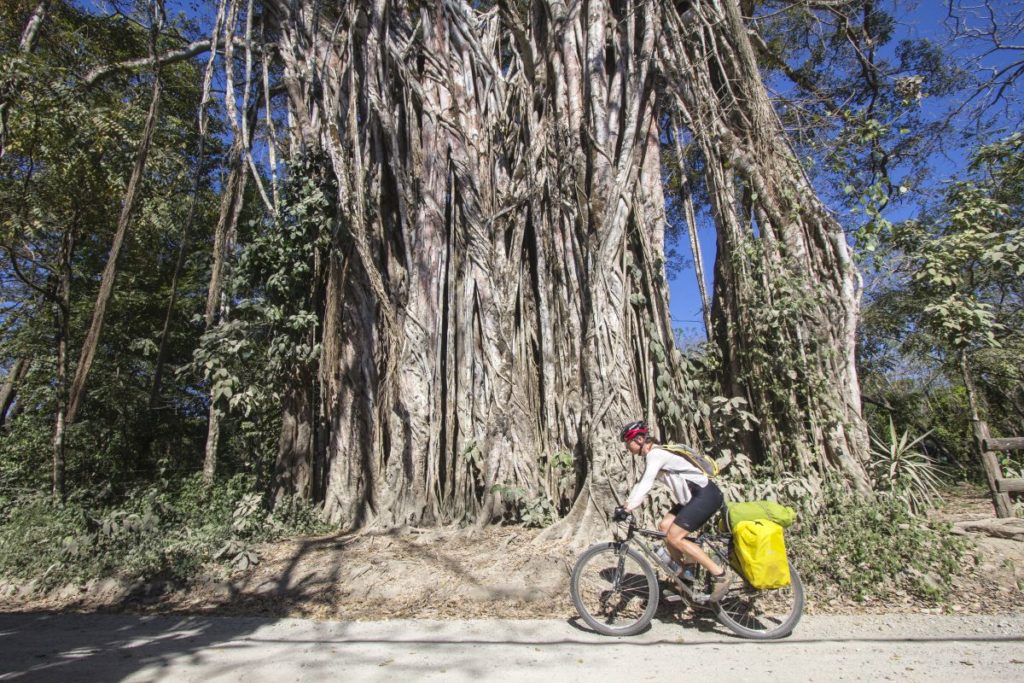 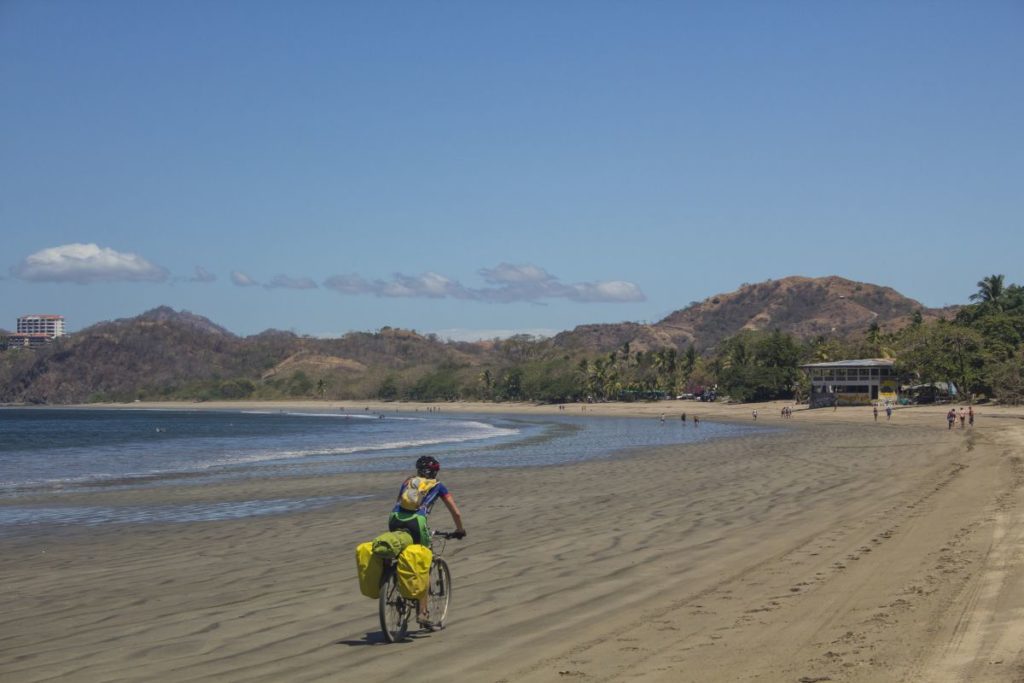 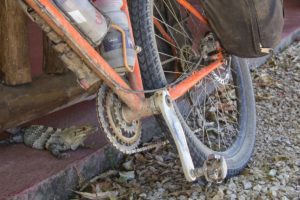 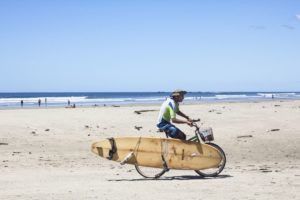 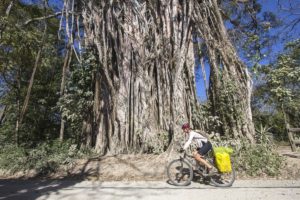 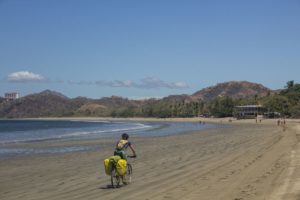 A mixture of dirt roads that weave through tree tunnels, beach riding – or in one instance, beach pushing – and rather bland pavement bring us back to the city of Liberia and the conclusion of our Costa Rican ramble. Despite all the hardships (oh, those inclines, washboard and dust), it’s impossible to overlook all the enticing rewards that the rustic and rough-around-the-edges Nicoya can offer a touring cyclist. Just don’t forget the sunscreen and chamois cream.

Canada’s major airlines fly direct from Toronto to Liberia. From here, you can cycle clockwise or counterclockwise around the Nicoya.

The best months for cycling Nicoya are January to March. During this time, the rainy season is a distant memory, which means river crossings are much more manageable. The trade-off is that certain roads become very dusty.

The Nicoya is not a place where you’re going to pound out 100-km days. Rough roads, hot temps and sightseeing will work against your distance goals. Ideally, you should set aside about two weeks to make a full loop.

There are not a lot of options for multi-day bike rentals: you should bring your own ride from home. You can go with traditional panniers or set yourself up bikepacking style with frame bags. Be sure to run tires that are 2.1″ or wider with some grip.

Family-run restaurants called sodas are your best bet for reasonably priced calories. Nearly every midsize town has at least one. Also, you’re never too far from small grocery stores where you can get a cold drink, ice cream or food supplies for self-catering.

How to find your way

Paper maps won’t be very helpful for navigating around the Nicoya. We used Ride with GPS to plot the roads and trails we wanted to take, and then uploaded the routes to our head units. To see our 420-km Nicoya loop, head to my Ride with GPS profile, mkadey, and search Routes and Rides for “Nicoya.”