Doing one of these MS Bike events would be amazing Lorena, so why all of them? In late July, a radio host asked me that question ahead of the upcoming Grand Bend to London ride in Ontario. It was a good question, and one I hadn’t really considered.

I suppose, in my head, I was a cyclist—one who had gathered some accolades in a variety of settings, from multi-day mountainous stage events to 24-hour endurance races. So one MS Bike event didn’t feel like enough of a challenge to me, or to those I hoped would support me. I needed something bigger and more meaningful to demonstrate my dedication to the cause and better serve the memory of my uncle, whose passing had inspired my participation in MS Bike events in the first place.

Why ride them all?

In reality, I hadn’t ridden my bike with any intention in the more than three years that I had lived in Canada. Yes, there was the odd commute here and social ride there, but nothing in anger, so to speak. Knowing I hadn’t spent much time on the bike for a while, let alone done any structured training, I settled on the idea that my fitness would improve as I worked my way through the Canada-wide events. By the time I approached the final few rides, I would be in tip-top condition again. Clearly, I hadn’t anticipated the 75-km slog I experienced on my first training ride.

After my uncle died, I had a feeling of helplessness that so many people experience when a loved one passes. That’s the big reason I had approached the MS Society of Canada with the idea of riding each and every MS Bike event across the country to help raise awareness and some funds to support the charity. I planned to ride the Canada-wide events in the order they had been scheduled and mirror the distance associated with the in-person tours. Given the size of the country, I wanted to complete the Ontario-based events in-person and those located in the other provinces virtually. The schedule meant that on occasion, I would need to cover two events on the same day as some of the rides were hosted in different provinces at the same time. Thankfully, these clashes were toward the end of the 13-week period in which the events took place. I had a bit of time to build my fitness back up before my days that would have been roughly 200 km. 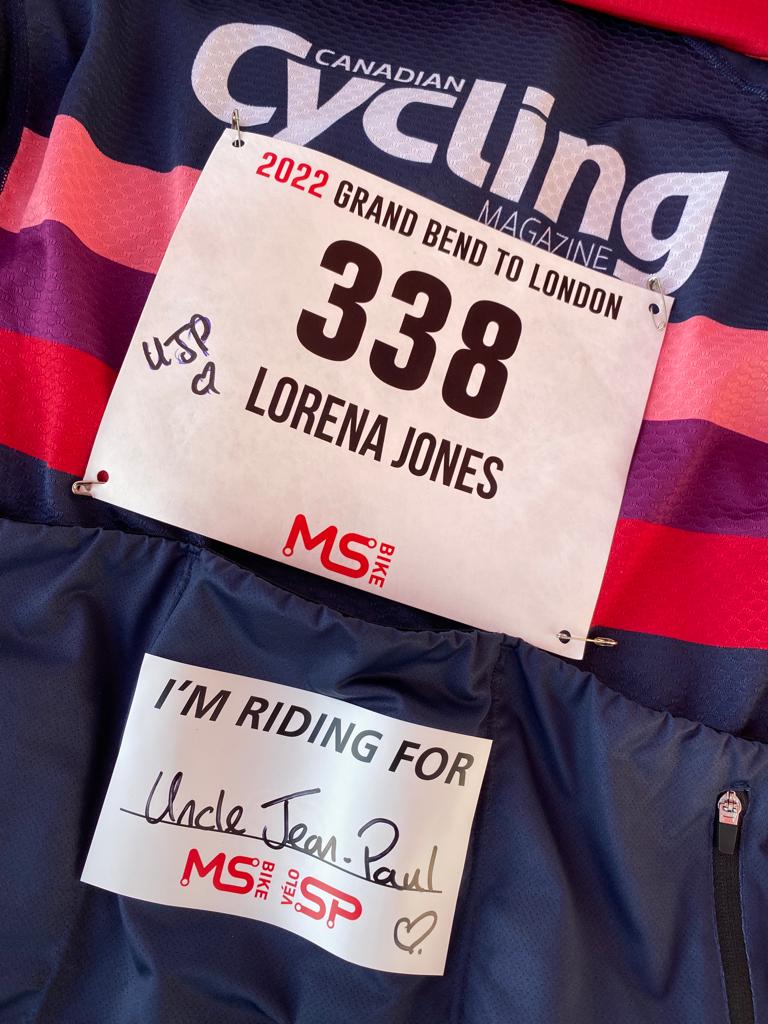 The Plan: All my MS Bike rides

After setting out this plan, there were a few changes. Cowichan, for example, went from a two-day event to one. The distance for Trois-Rivières got longer.

How it all went down

In my experience, my fitness levels tend to pop back up to (at least) their previous position following approximately one month of continual, structured training. To complicate things, I was set to travel with work almost every weekend in between events, which eroded my available riding time. I rode a 25-km commute to work and back a couple of days a week and tried to squeeze in an evening or weekend ride where I could. Otherwise, each MS Bike event provided training for the next in line. Of course, I saw a gradual improvement in my fitness as a result of participating in a series of rides, but I think it was my frame of mind that determined my staying power.

As a former competitive cyclist, I wrestled with my disappointment when I realized the extent to which my performance had reduced during this extended hiatus. Of course, my primary target was to finish the events as they had been scheduled, so I needed to pace myself more than I was used to and, realistically, more than I would have liked to. This pacing worked for most events but for others, such as the third virtual ride, I had some tight timelines that added some pressure to my rather slow pace. I selected a steady, relatively flat route for that ride specifically and worked with the wind as best I could to complete the 100 km and make it back in time for my cousin’s wedding.

Having completed the lion’s share of the events, I had hoped that my fitness levels would be back on par by the time the 200-km clashes rolled around. Combining Trois-Rivières and Gimli the final weekend of August consisted of 220 km on Saturday and 80 km Sunday. The week before, with nine events under my belt, I was faced with the hard truth that you simply can’t replace structured training with sporadic rides. In reality, I knew this already. I published a piece on it a while ago. MS Bike knows it, too, which is why they link to CCM’s training plans in their handbook, but I guess I was ever optimistic when I committed to the series.

In short, the training I lacked would have provided the physical and mental preparation I needed when approaching a series of events such as this. That said, if It wasn’t for the longer distances when two events clashed, I could and would have pulled through without a problem. It’s simply a lot more comfortable when you have the base training in-hand.

I should also mention that even though the challenge had more virtual options, my intention with the in-person tours was not to whizz through them, but to come together with like-minded people and enjoy the event while raising the awareness and associated fund for a charity that has an emotional connection, not only to me, but to many others as well.