On May 19, riders in the Giro d’Italia will roll out, one at a time, on a tough, hilly time trial within the province of Emilia-Romagna. At roughly the 18-km mark, a more than halfway through the 34.7 km TT and still on relatively flat ground, riders will pass into San Marino, a micro-state within Italy’s borders and one of the world’s oldest republics. Then, it will be mostly uphill into the Apennine mountain range, with some grades in the double digits.

This past fall, I was hosted by Hotel Lungomare, a four-star bike hotel in Cesenatico, on the Adriatic Sea, not far from Stage 9’s start line in Riccione. Lining the walls of Hotel Lungomare’s fully loaded bike room are photos of past professional teams that have stayed over during training stints in the region: Sky, Astana, Cannondale. Farther down on the walls sit the hotel’s rental fleet, Pinarello F10s, the same ones Team Sky rode for the 2018 season. It’s a cyclist’s dream.

Four other riders and I, started our ride on the flat, oceanside landscape and continued inland. The ground stayed level for the first 4 km. We passed vineyards and olive groves: a postcard picture of what you think the Italian countryside should look like. The hills and the high point of San Marino were just off in the distance. We had a slight tailwind and we rode hard, but conservatively, toward the base of our climb.

After the first 4 km, which were easy if you weren’t in the lead, a gentle false flat warmed up our legs further. I imagine this slight incline will start the pain in the muscles of the professionals racing their time trials. The road is smooth with wide shoulders and very considerate drivers. A constant stream of cyclists were going in the opposite direction, heading home from their early morning rides. Our ride conversation here was light compared with other days as we knew the pain that awaited us starting at San Marino’s base, about 13 km away.

Colombari’s plans for cycling fans sounded great, like an Emilia-Romagna version of a tailgate party.

At border of San Marino, our lead rider and guide gave us the go-ahead. We were off on our own little uphill TTs, our personal battles, to the top. At only 7.5 km, the climb is in no way the longest in the Giro, but riding solo and at a TT effort will make this is one tough stage. Our group split quickly. We were alone on gradients as high as 14 per cent, but hovering just around seven per cent on average. The pain built quickly and didn’t go away. The first half of the climb is outside the city of San Marino (but within the republic’s borders), still surrounded by farmland. The road is steep and straight to San Marino city walls. The mental game is tough here knowing how much is still to come as you try to conserve and burn energy at the same time. Once within the city limits, we were on our final push to the top with our legs screaming. The Giro aside, this city loves cycling. The locals and tourists cheered us on as we kept riding toward the summit. Close to the city centre, after passing the gates, the roads switched from smooth pavement to old cobbled streets. The finish line for Stage 9 of the 2019 Giro is San Marino’s parliament courtyard. Here our personal victory to the top was not rewarded with massive crowds and champagne, but with a view that is unmatched anywhere. 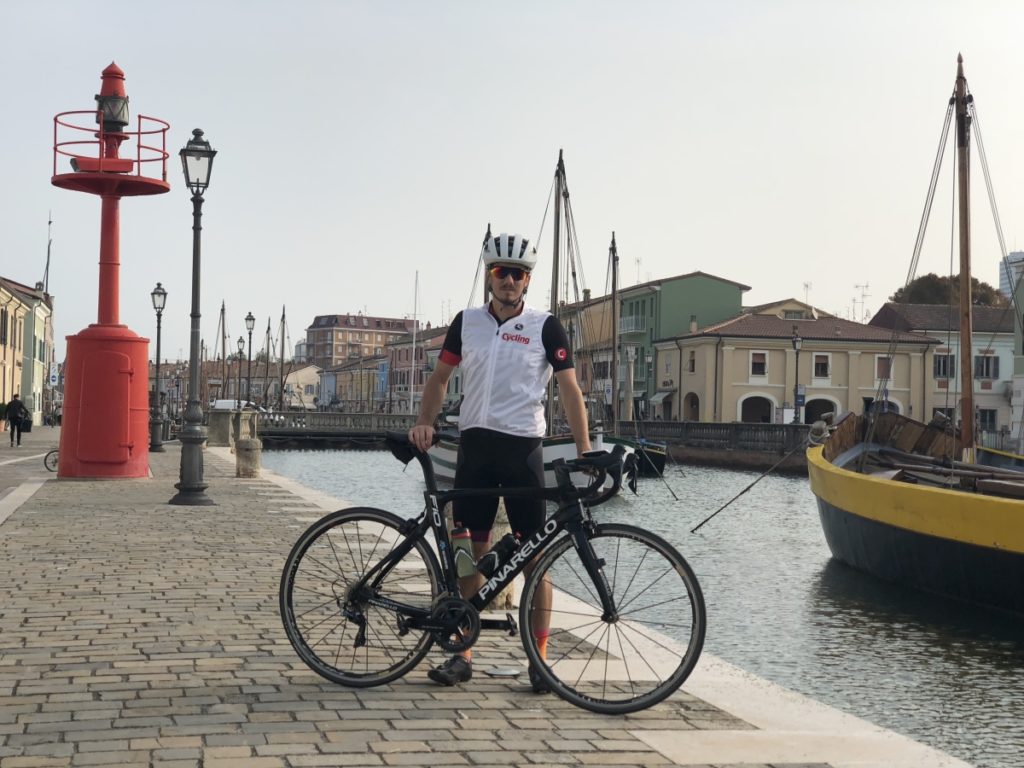 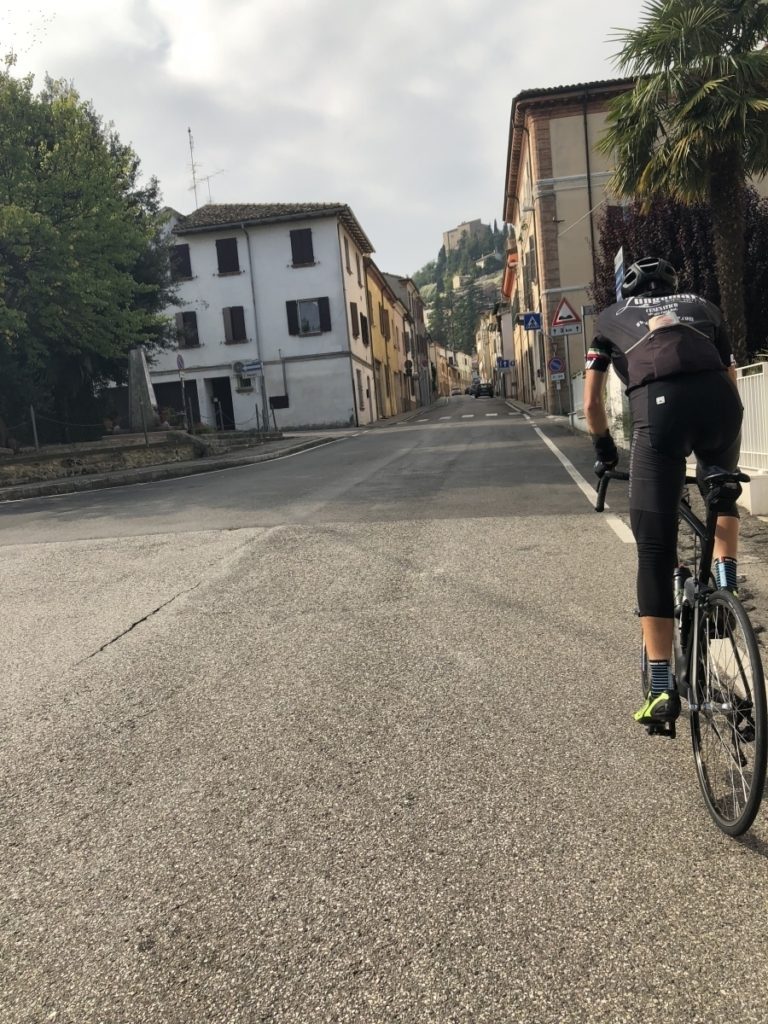 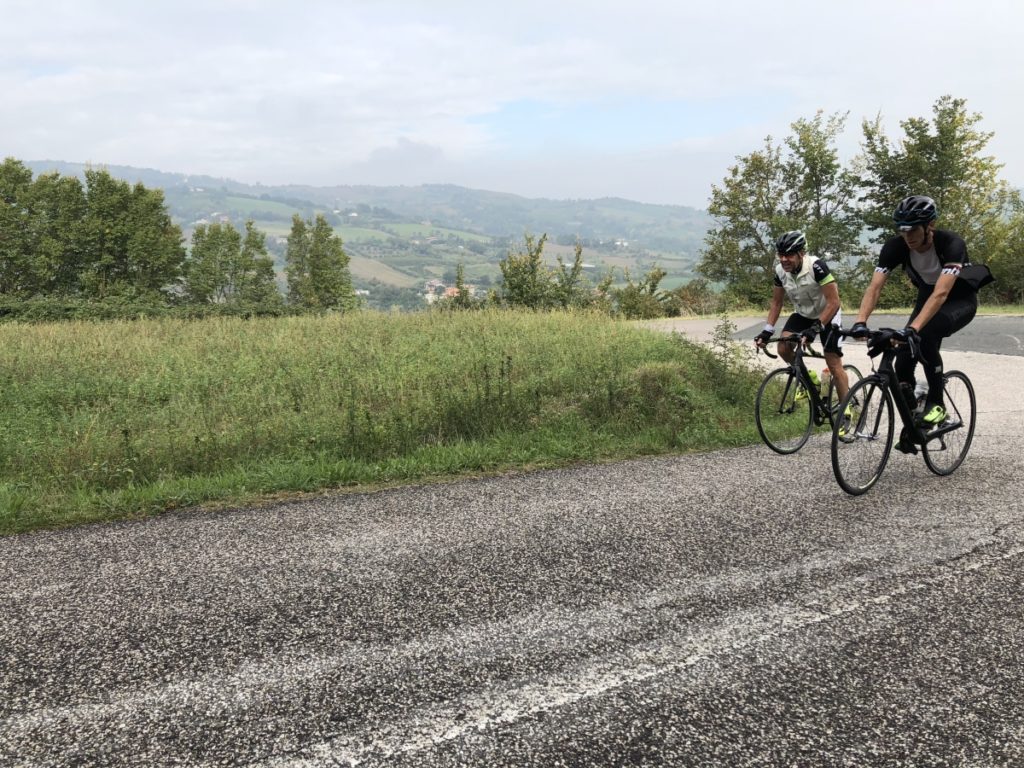 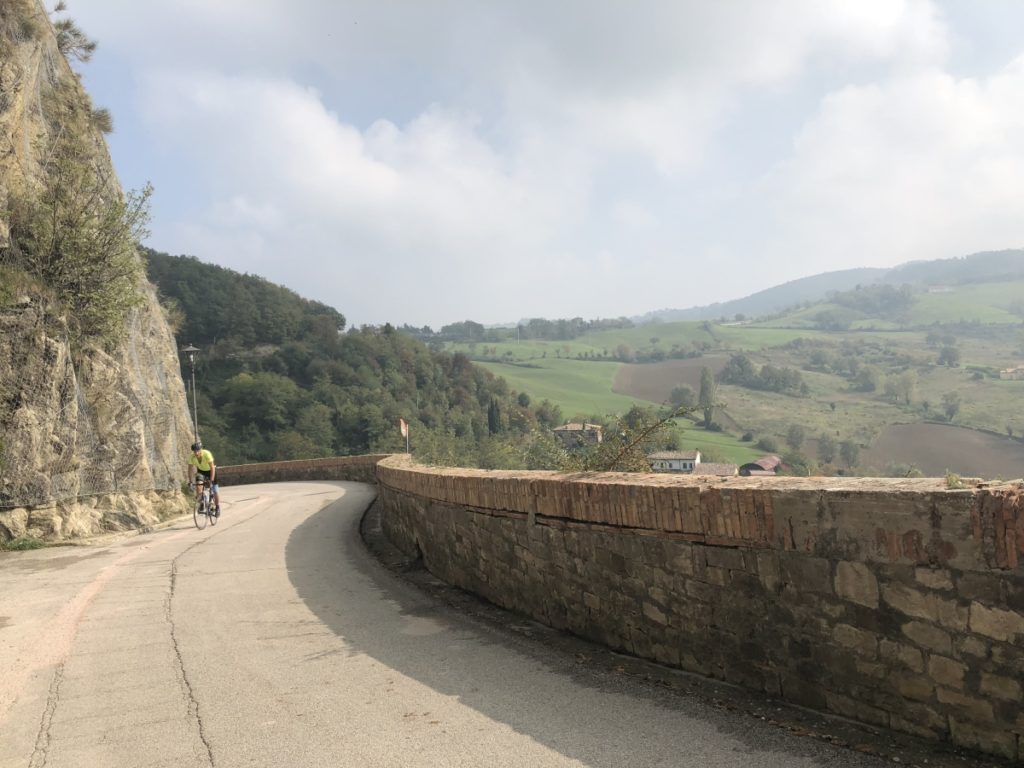 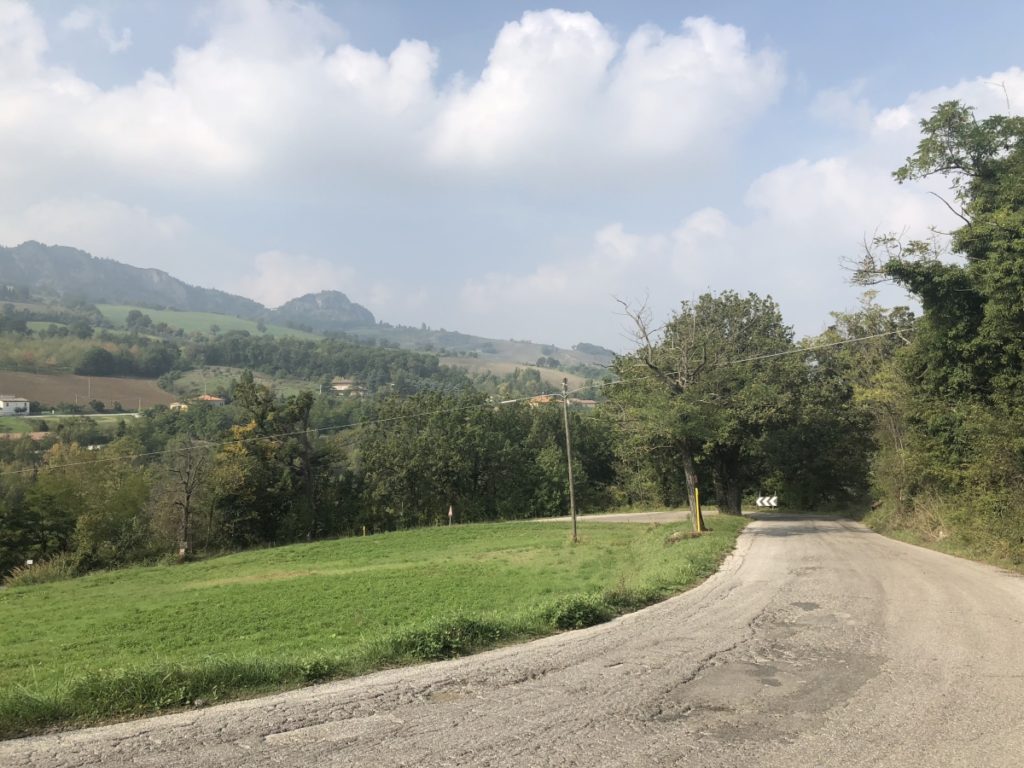 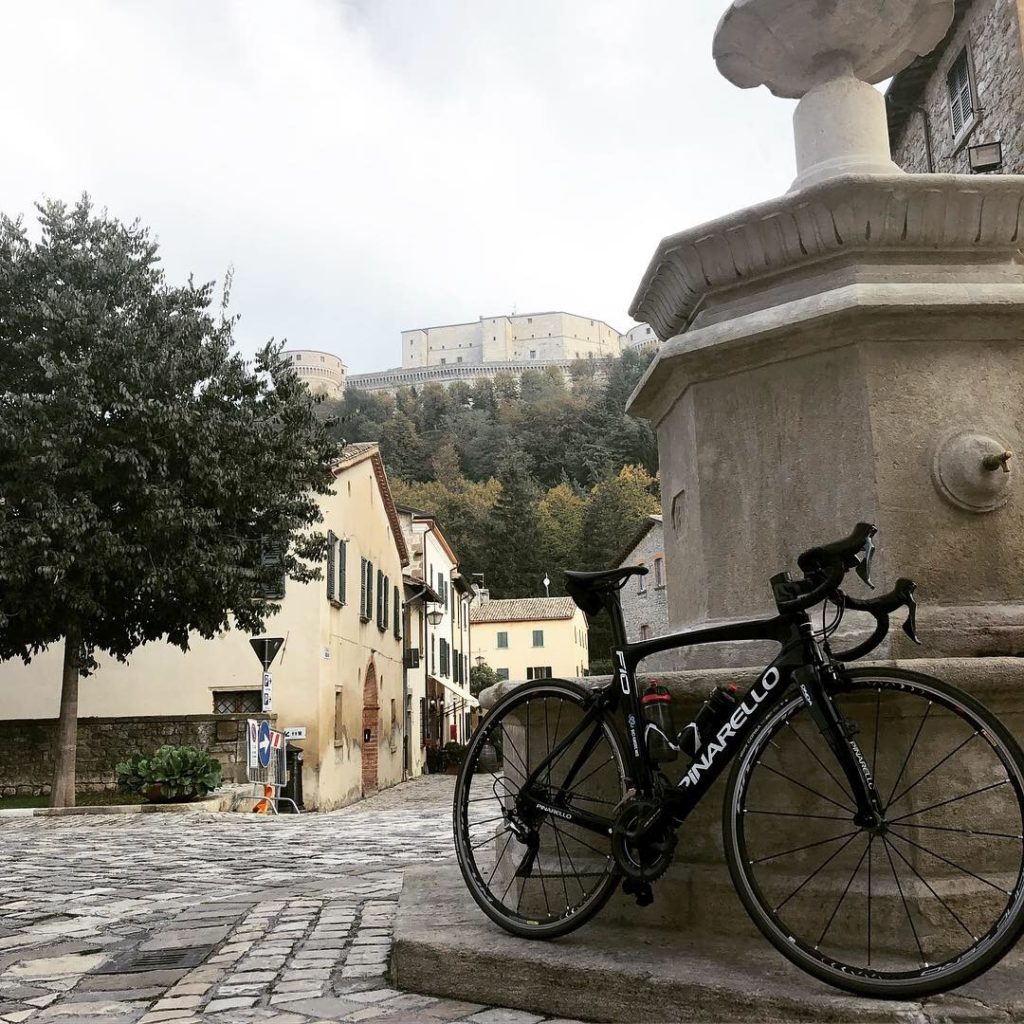 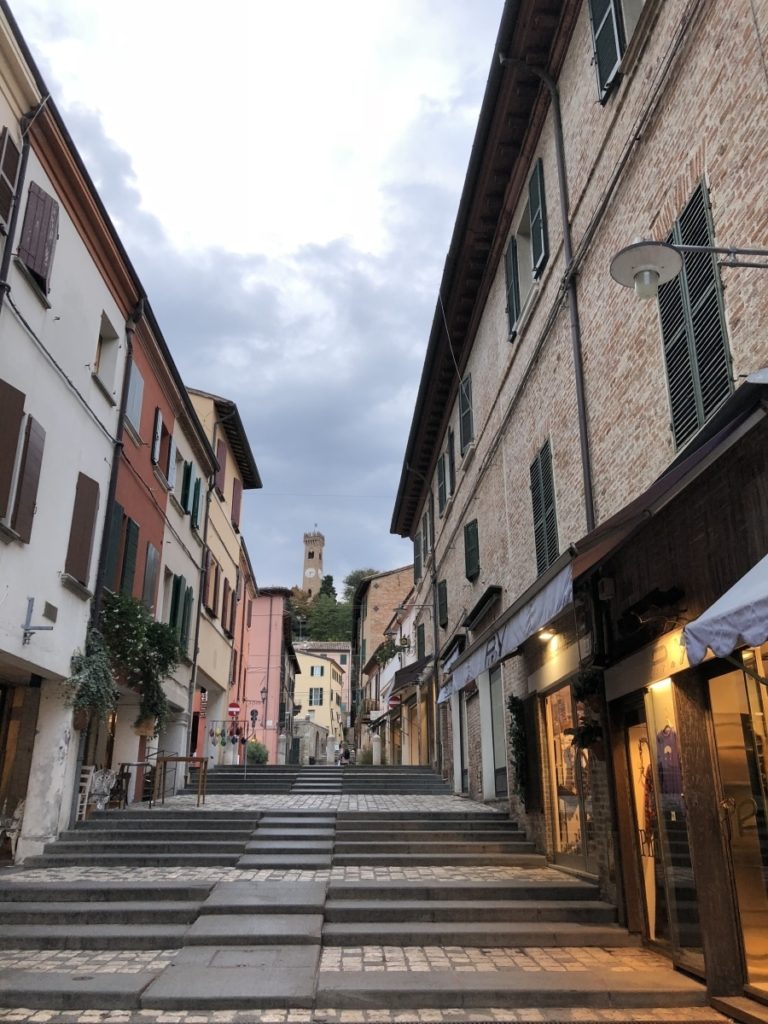 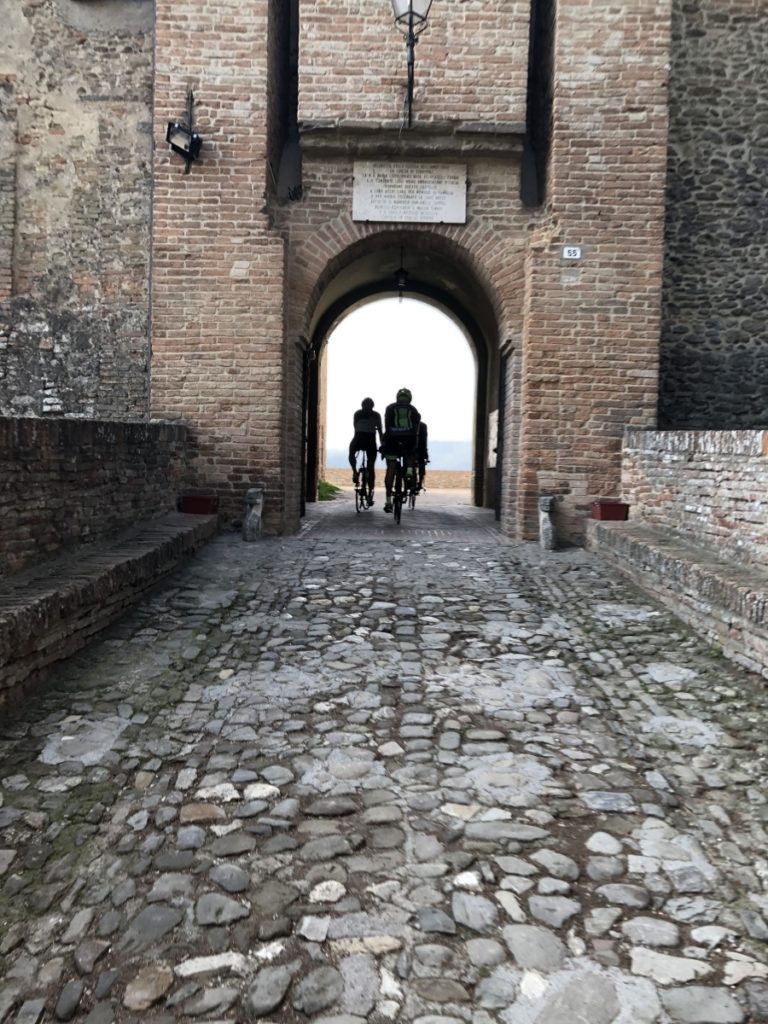 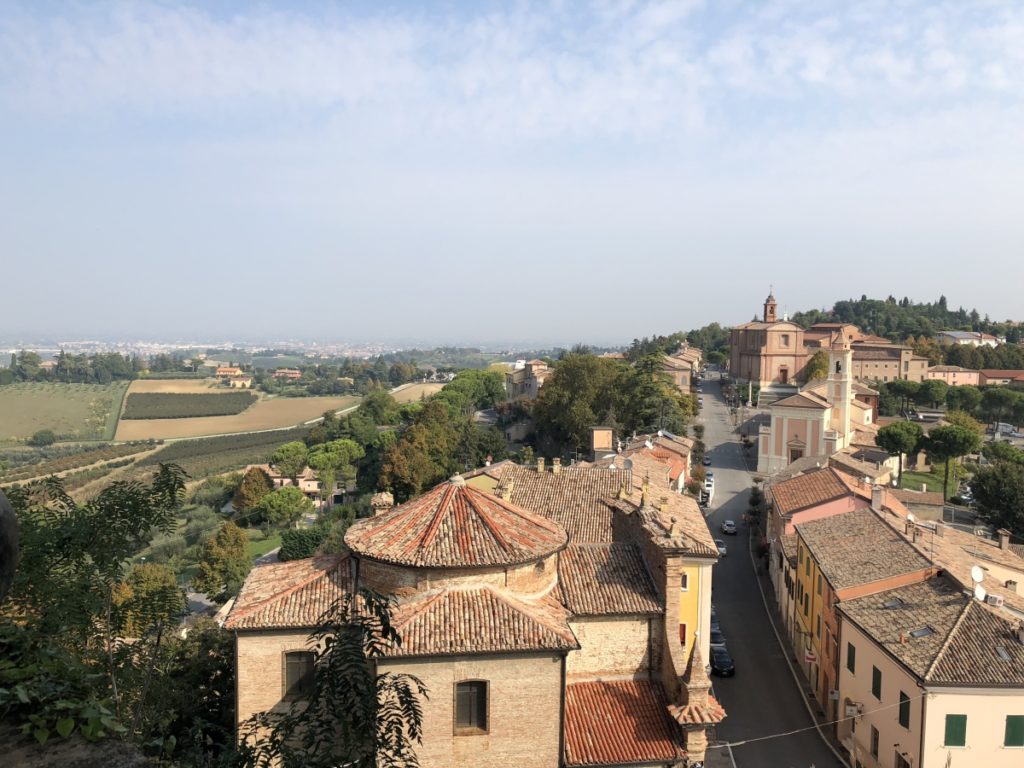 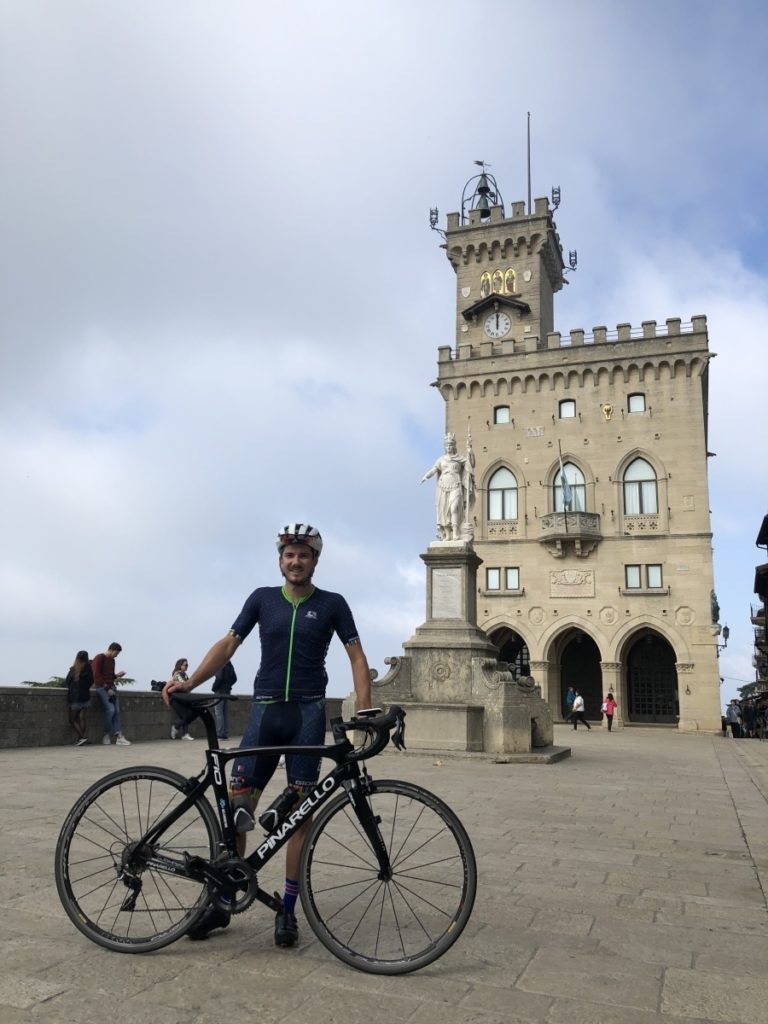 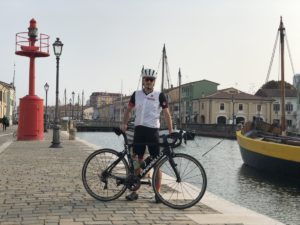 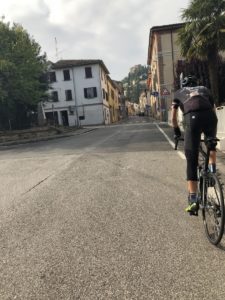 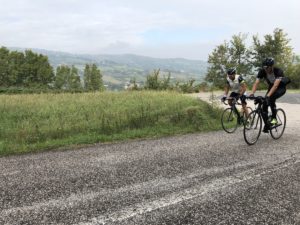 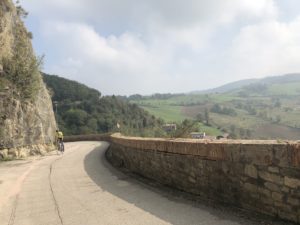 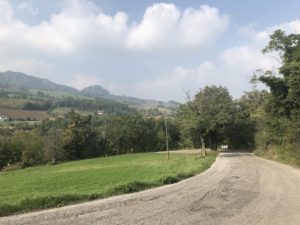 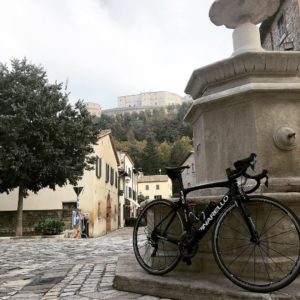 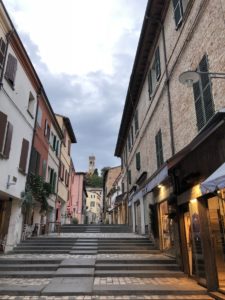 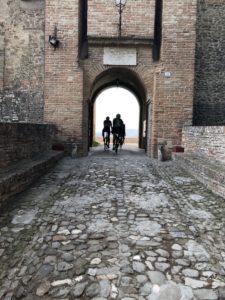 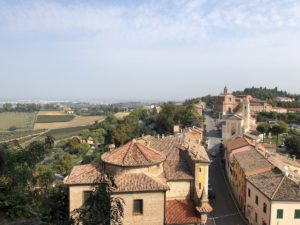 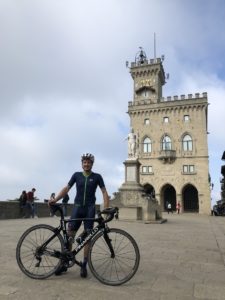 This past Sunday, back on the coast in Gabicce Mare, hotel owner Roberto Colombari outlined his plans for the Giro. Colombari has run the Hotel Alexander for roughly 20 years and has been catering to amateur riders for almost has long. His dining room was full mostly of riders from Switzerland, Sweden and even one from Brazil. Many had ridden the Gran Fondo Squali that morning and were recovering from 2,100 m of climbing over 135 km. Colombari’s plans for cycling fans sounded great, like an Emilia-Romagna version of a tailgate party.

“On Saturday afternoon we will set up our camper between, Montegiardino and Fiorentino in the most demanding and exciting spot to watch the chrono, sangiovese wine stage that will take place this Sunday,” he said referencing the grape that makes the red wine the region is known for. “Our cyclist guests will arrive there by bike at noon. They will bike through a different road up to Mercatino Conca because the main road where the Giro passes will be closed at 9 a.m. I will drive there with some guests where we will set up our picnic. The area of the picnic is on a flat ground, where we will prepare some tables and chairs. The camper provides a kitchen corner where I can cook some delicious penne all’arrabbiata, my very own special recipe.”

On this stage, many of the riders in the Giro will hurt, a lot. For some, the time trial will be a nightmare up to San Marino. I feel for those riders, not so much because of the pain they’ll face in competition, but for the the pain they’ll surely feel afterwards, once they realize the great views they missed while in their aero TT positions.