It was a very exciting edition of La Course by Le Tour de France on Friday, a one-day race for women held on the same course as the men’s time trial stage. Thousands of people were thrilled to watch Marianne Vos powering her way to victory on the last steep climb. Canadians fans had reasons to celebrate too when we saw Leah Kirchman following in second place. What a race!

With so much enthusiasm from the fans, many people wonder how is it possible that there is still no Tour de France for women? There used to be one, from 1984 to 1989, after which it went through several modifications of names and formats, basically going smaller and smaller and detaching from the men’s Tour de France, until disappearing completely.

We had to wait until 2014 to see it’s comeback after a group of professional riders assembled over 100,000 signatures on a petition to bring back the Tour for women. A one-day race was held in 2014, on the Champs-Élysées just before the men’s final stage as a response to the petition. It was not a stage race, but riders were optimistic for the future. Five years and three-race formats later, we’re back to one one-day race. There are a few reasons that explain this: 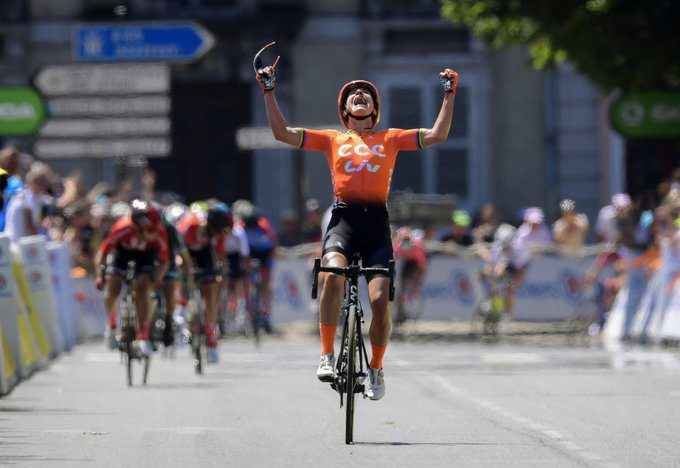 The ASO, owner of the Tour de France, don’t see the monetary value of women’s racing and they are in the business of making money. They are the ones deciding whether or not they want to organize a women’s race along with the men’s Tour. From a business point of view, there would be simply a lower return on investment trying to sell TV coverage for the women race while the demand of broadcasting rights is so high for the men’s race. Therefore, they don’t bother trying.

Teams don’t have the resources

Women’s team operate on a fraction of a men’s WorldTour team budget. Most of the women’s teams wouldn’t have the resources to provide the necessary support to their riders to sustain such a long race. The men’s teams have buses to shower and sleep in transit, chefs to prepare a lot of delicious food (no one can sustain plain pasta for three weeks!), several massage therapists, mechanics etc. They can afford all the staff required to fully take care of every rider.

It’s not that women couldn’t endure a three weeks stage race, because this has been proven several times in history that women are just as endurant as men, but you can’t expect the same level of performance without the same resources. The longest stage race on the Women’s WorldTour at the moment is the Giro Rosa, a 10-stages race held in Italy and it’s always challenging race for teams on the logistics side. If there were to be a longer race, it would need to be adapted to the reality of women cycling and of women’s team budgets.

One solution to both problems is to grow women cycling’s audience, to develop the market, in order to provide higher value for both the race organizers and teams’ sponsors. Some actions have already been taken by the UCI to move toward equality, they proposed reform with a new set of rules to develop women’s cycling. From next year, race organizers will have to offer at least 45 minutes of TV coverage to get a WorldTour licence.

C'était une belle journée! So happy to pull off a podium🥈 here in France @LaCoursebyTDF! Superb teamwork all day helped give me the confidence to race fearless and go all in for the final sprint up that wall!🤗🇨🇵🚲 #lacourse pic.twitter.com/pmK5JfrptA

Sounds like very exciting progress, but it’s a request that wasn’t welcomed by the ASO, unfortunately. Instead of collaborating, the ASO threatened to remove two important Spring Classics race from the Women WorldTour calendar before agreeing in June to provide TV coverage at Fleche Wallonne and Liege-Bastogne-Liege. We don’t know yet if there will be a return of a women’s Tour but ASO is now exploring introducing a new women’s race to the calendar.

As long as race organizers see a bike race as dollar bills, it will take time. They have to see women’s cycling as so much more, as a way to make an impact. An impact on the fans, on the little girls watching and thinking it’s possible, and on the whole world needing for a change toward equality. Women cycling is a platform to demonstrate women’s power and determination, I truly wish more people could witness this. To invest in women’s cycling is way more than to develop a sport, it’s to change the culture.

Marie-Soleil Blais is a first-year professional with Astana Women’s Team from the Centre-du-Québec. She’s a seven-time Quebec champion on the road and track. At 2019 BC Superweek, Blais won the Choices Market Criterium.