British Columbia is blessed with a vast expanse of mountainous terrain that’s the envy of every other Canadian province. Ice-capped mountain ranges of imposing rock make it the go-to destination for mountain lovers. As a result, Canada’s westernmost province is home to many of the most challenging and iconic climbs in the country. From long twisting alpine ascents that rival the mountains of the Tour de France to epic gravel ascents and never-ending climbs on some of the few roads that connect the various communities in the Coast, Caribou, Selkirks, Monashees and the Rocky Mountains. Here are 15 of the top climbs in the province of B.C. 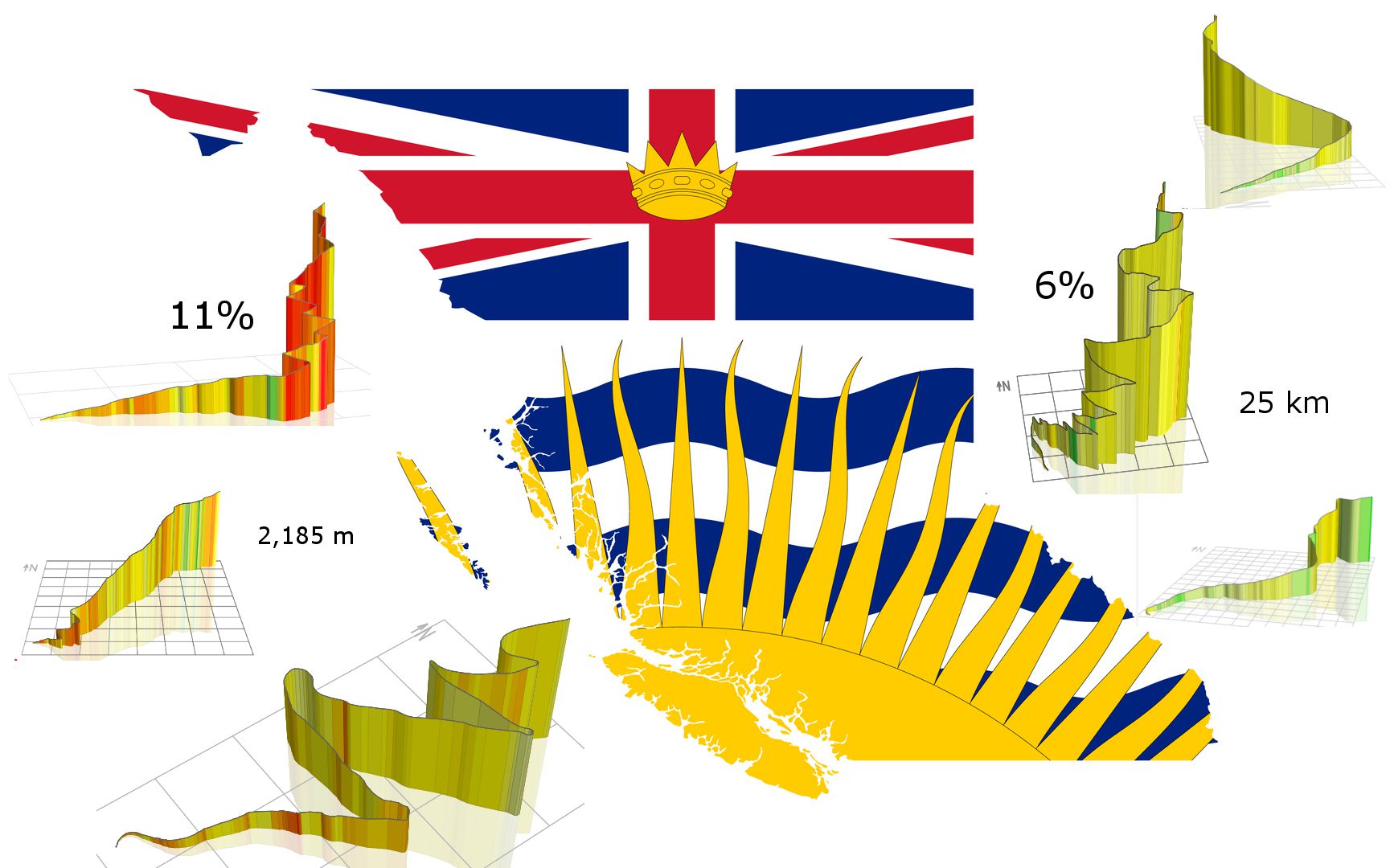 Don’t let the 5.5 per cent average grade fool you, Mount Revelstoke is a beast of a climb. It could also be the best climb in Canada. At 1,405m, its elevation is up there with some of the biggest in Europe and, since its a road frequented by tourists accessing the national park’s hiking trails at the summit, the road itself is usually in great condition. Take in the views of the Monashee and Selkirk ranges on the way up, though, because the way back down is a fast, incredibly fun descent ending in a series of wide, banked switchbacks. Go early or time your ride to descend after the park road closes for the day and you can have the road almost entirely to yourself, except for the occasional bear and other wildlife, who also enjoy the park.

Mount Seymour can be ridden as part of Vancouver’s Triple Crown route, but, at 20 m shy of 1,000 m elevation gain, it is plenty challenging on its own. The climb begins as you pass through park gates and winds its way up through the thick west coast forest. A steady and steep grade pitches up occasionally and doesn’t let up until you reach the Seymour ski area. Scenic views don’t come until the top, but the parks big trees and lush greens are enough to keep your mind off the climb. On a clear day, you’ll be rewarded with a fantastic view inland across Indian Arm towards Coquitlam and the Fraser Valley.

This extended climb starts just outside Pemberton, near Whistler, and climbs up towards Duffey Lake. After starting with several steep, sweeping switchbacks, the grade levels out somewhat. Duffey Lake climb still covers 1,089 m in just 13 km, so ‘level’ is a relative term. This highway is shared with steady logging traffic, so ride safe and avoid peak traffic hours if you can.

Starting from Vernon, this climb quickly leaves the city behind as it climbs towards Silver Star mountain resort. The road climbs steadily, taking you up 1,078 m towards Silver Star Village. From there you can descend back to Vernon. Or, take a chairlift up to the top of the mountain for hiking and mountain biking.

A theme of many of the great ascents in the province are that they climb towards ski resorts. Much like in the European Alps where famous cycling climbs lead to ski villages, the climb to Apex Mountain Resort is one of Canada’s most challenging. For 10 km, the climb is relentless and features some very challenging sections with many ramps of over 10 per cent. While there aren’t dozens of switchbacks like on many European climbs, there are some sweeping bends throughout the climb.

The first quarter of the climb to Hudson Bay Mountain are paved. Then the road turns to gravel where riders will face the steepest sections of the road to the top with the increased challenge of the gravel in places being a tad loose. Word is, nobody has ever done the climb in under one hour. The top is at the Hudson Bay Mountain Resort.

The climb up Mount Washington starts with a punishing steep section to test your legs, then levels out a bit so you can find your rhythm. There’s one, brief downhill in the later stages of the climb before the grade kicks back up again towards the top. From the top, enjoy views back into Strathcona Park, as well as across the water to the mountains as the Coastal Range as you descend towards town.

The climb from Kelowna to Big White is very long but rises a staggering 1,213 m so could not be ignored in the list of the top climbs in B.C. The climb rises in steps and is gentle for most of its length staying in the 5 per cent range. There are numerous sections where the road levels off or even descends for a couple of kilometres before it points upwards again. The climb is home to the annual L’Alpe de Grand Blanc ride from Kelowna to Big White Ski Resort.

By many measures, this is Canada’s toughest climb. At over 10 km long with a gradient of over 10 per cent, McBridge Peak is a beast rivalling the most challenging climbs in Europe. Most of the climb is on a gravel road and by recent accounts can be ridden on a road bike though you’ll want to make sure to have the right gearing cause you’ll encounter pitches of nearly 20 per cent on the way up. Despite the considerable challenge of this climb, on Strava it’s only been attempted on 14 occasions by nine different riders in part due to the climbs remoteness.

A climb that heads from west to east on Route 3, Paulson pass is a long effort and tops out after 1,002 m of climbing. The climb starts at Christina Lake and is on a highway so like many of the major climbs in B.C., you’ll want to try and avoid peak traffic hours and ride safe. The climb never goes above 8.6 per cent gradient making it a long but steady effort with some points in the climb where things level off a little bit.

Another monstrous climb on Route 3, Kootenay Pass is further to the east than Paulson and rises 1,094 meters. The climb, like many of the highway climbs in the province is steady with most gradients at 7 per cent and briefly hitting 9 per cent in places.

The climb out of Osoyoos on Route 3 is a road with some lovely views of Osoyoos Lake. Like the other climbs on Route 3 on this list, it’s wise to try and avoid peak traffic hours to make your ascent and ride smart and safe. The climb isn’t terribly steep but has some stunning switchbacks and does have some tough gradients just under 10 per cent.

The favoured local climb for Vancouver cyclists, Cypress is a gentler climb than Seymour. It starts with a gently rising false flat before kicking into kilometres of steady 7 per cent gradients. The steepest part of the climb is only 8.5 per cent. The road to the Cypress Mountain ski area continues past where the climb peaks out. Make sure to stop at the top of enjoy a beautiful view of Vancouver 900 m below. Like Seymour, Cypress is part of the Triple Crown ride.

If you want to string together some of the countries longest and hardest climbs, Route 3 in the south of B.C. is evidently a good place to start. Bombi Pass is right outside of Castlegar and is another long steady highway climb with just a maximum gradient of 7.5 per cent.

Observatory Hill is the go-to training hill for Victoria cyclists. It’s certainly rivalled in size and steepest by many other ascents in the province but its popularity elevates its profile. It’s not the longest in the province or even the steepest in Victoria, but it is an excellent grade and length for training. Since the gate to the top is usually closed all vehicles other than Observatory employees, there’s minimal car traffic as well. Keep your speed in check on the way back down as you roll through the Observatory buildings, so cyclists can continue to enjoy access to this excellent road.