Canada’s biggest province is a geographically diverse area so it’s not surprising there are some testing climbs across Quebec. While the province lacks high alpine ascents like those in the western part of Canada, there’s a wide variety of climbs to overcome. Quebec’s population is concentrated along the Saint Lawrence river with the river lowlands bordered to the north by the Laurentians and the south the Appalachians meaning there’s lots of good climbing to be found throughout the province. Here are the top categorized climbs in Quebec. 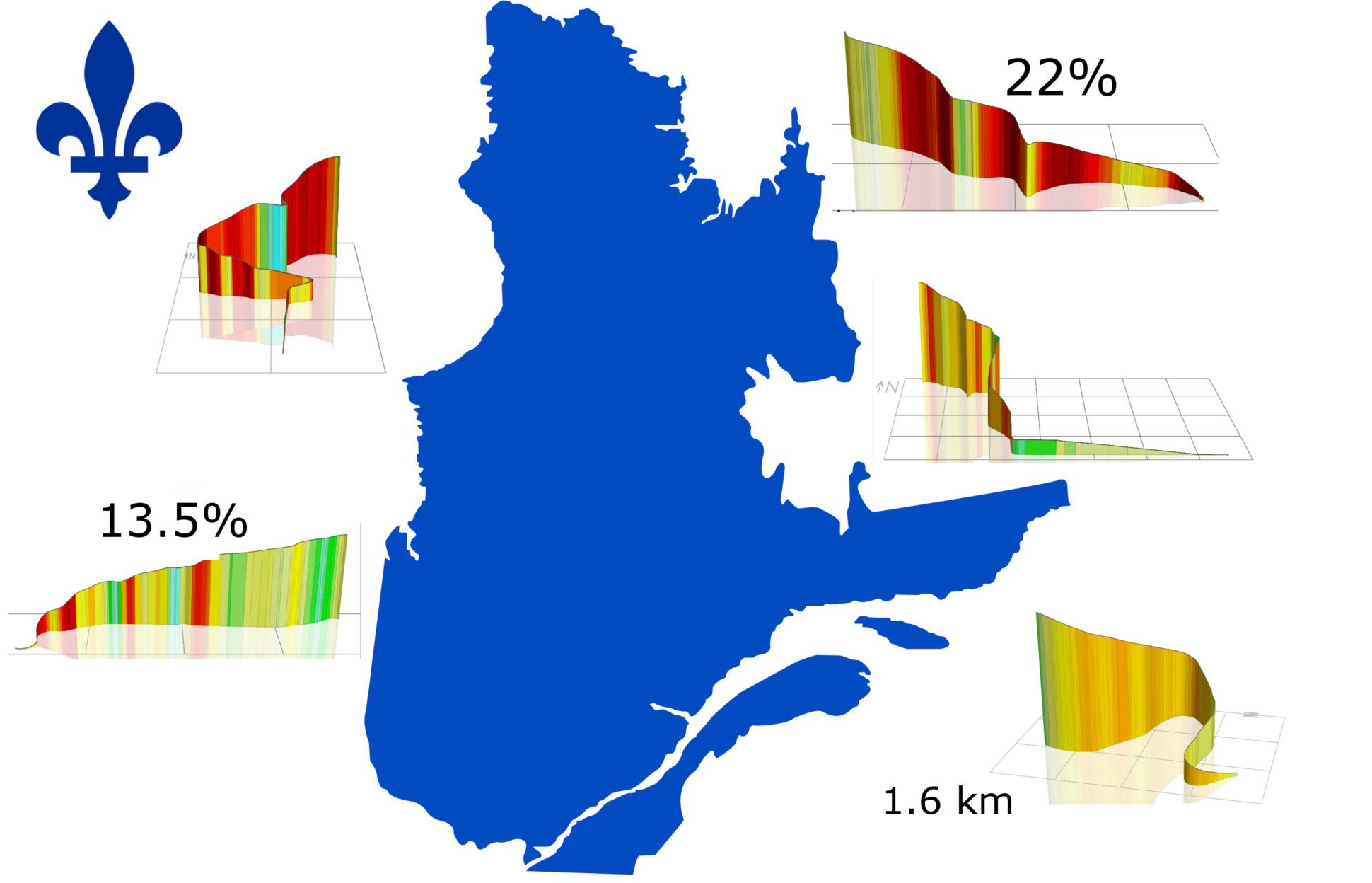 Up part of the ski hill in the Eastern Townships, Sutton is a straight forward climb until you arrive at the final brutal pitches where the road switchbacks to the top. The road begins at a grade mostly below 10 per cent before reaching the upper slopes were the gradients really bite with a max gradient of 23 per cent. It’s definitely a tough effort and pacing is important to make it to the final sections with enough power to punch to the top.

This beauty of a climb in Gaspesie is a real challenge with sustained gradients above 10 per cent for 5 km, there are few harder climbs in Canada. At the top, enjoy the views from the Oratoire Notre-Dame-du-Mont-St-Joseph with a 555 m drop to the Bay de Chaleur.

The iconic climb of the Tour de Beauce, Mont Mégantic is a Canadian classic. It’s one of the longest climbs in eastern Canada and presents a real challenge over it’s nearly 10 km. The climb starts very gently before really kicking up after 4 km. With a max gradient of 30 per cent, it is no easy task reaching the summit.

A classic rolling climb north of Montreal with beautiful views of the Laurentians, the Nordet is a pristine stretch of pavement not too far from Mont Tremblant. It’s not as long or hard as others in the province but it’s a very popular road earning it a place amoung the provinces best. The one really steep section comes towards the top after 6 km of climbing.

The center piece of the GP Montreal, Camillien Houde is one of the most popular ascents in Canada. Conveniently located in the heart of Montreal, it’s a climb locals, such as pro and KOM holder James Piccoli, know like the back of their hand. The climb has a false flat early on before the tougher slopes past the lookout over the eastern part of Montreal and the Olympic Stadium with a max of 10 per cent.

Gatineau Park is a playground for cyclists. A popular route is to head to the Champlain lookout Camp Fortune climb from Chemin Lac Meech. The climb starts with Promenade du Lac Fortune which is a vicious little climb before turning right on Promenade Champlain for the final rolling kilometres to the beautiful lookout from the Belvedere.

In the Charlevoix region to the northeast of Quebec City, there are many beautiful climbs especially that climb up from the shores of the Saint Lawrence. This climb up from the river valley that flows into Baie Saint-Paul has a tough start with maximum gradients of 20 per cent. The climb has a few little descents and then eases off a bit at the top.

The climb out of Pointe-au-Pic not far from La Malbaie is relentless with long sections above 10 per cent but never over 12 per cent. Look back towards Malbaie and you can enjoy some stunning views.

A tough climb up to the top of Mont Bélair, this 4 km climb is not too far to the west of Quebec City. A gentle start transitions into a brutal section just before the mid-way point of the climb with max sections at 20 per cent. The climb then eases off a bit as you look up the climb before another brutally steep section at the top.

An insanely steep 2 km climb with long sections at 20 per cent and higher. This brutal climb from the small village of Saint Joseph De La Rive features an average grade of 13.5 per cent. The climb leaves from almost sea level and gains 300 m in it’s short distance.