Canada’s three northern territories, Nunavut, Northwest Territories and Yukon, are home to many unexpected cycling gems. Whether you’re taking in the sublime beauty of the landscape as you ride uphill in a temperate summer climate, or braving -20 C weather riding in the frosty, northernmost points of Canada, the vast expanse of the Territories is truly yours to explore.

As with most adventures in the territories, it’s good advice to expect the unexpected. Just don’t necessarily expect pavement. Some of these climbs are remote, and there’s always a chance of encountering wildlife. With inspired titles such as North West Territories 8 climb and as little as 10 riders on the leaderboards, these categorized climbs are begging for more riders (and more creative names). 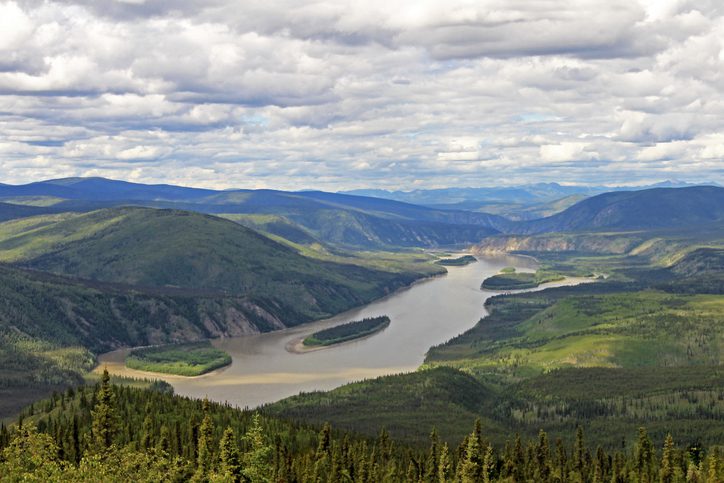 Clara Hughes currently holds this segment’s QOM and is the only woman to have ridden this climb. She rode in Iqaluit as part of her 2014 ‘Clara’s Big Ride for Bell Let’s Talk’ project, in which she biked 11,000 km around Canada in 110 days to get people talking about mental illness

Before climbing Yukon 1 Climb, visit the small town of Teslin, home to the Teslin Inland Tlingit First Nation. The town has one of the largest Native populations in Yukon, you can learn more about their culture at the Teslin Tlingit Heritage Centre. Cross the bridge to the other side of Teslin lake and you’ll hit Yukon 1 Climb, a steady 2.73 km uphill segment. The climb is located only 40 km from the Northern border of B.C. on the Alaska highway.

Surrounded by dense, northern forest on either side, this short segment pitches up dramatically then levels out over its brief 0.42 km burn.

One of the most northern climbs on this list, Nw Territories 8 Climb is located in a very cold region of the country. Only two Strava users have attempted this segment in March, when the average temperature is −20.3 degrees Celsius (without windchill). Strava user Omar Di Felice posted some striking photos of his March ride in the area. The closest town to this climb is Fort McPherson, population 776, about 60 km away. The segment itself kicks up a little at the 1 km mark then increases steadily for the rest of its length.

Just south of Haines Junction, this climb is located at the top of highway 3 (perhaps where it gets its name?)
At the end of the segment is the entrance to Auriol Trail national park, a 15 km hiking trail.

Start right from downtown Dawson City and climb up a solid 500 metres of elevation gain to the Midnight Dome viewpoint. Mostly paved, this route is less rugged than some of the other options up north. It also leads to a viewing platform where, if you’re lucky, you’ll get a spectacular show of the northern lights.

This climb is located in the heart of Tombstone Territorial Park. The mountainous park is unique in its flora and fauna, it was created in 2000 as a legacy of the land settlement agreement with the Tr’ondëk Hwëch’in First Nation. Named after Mount Tombstone (it looks like a tombstone), the park is home to five species of Dall sheep some of whom you may be able to glance as you pass through the mountains.

For the north’s biggest climbs, both in the Yukon, you’ll have to go a little more off-road than the rest. Both of these climbs turn into the more adventurous type of gravel, so be prepared. A mountain bike isn’t the worst idea, either. Especially considering both top out at the trailheads of epic singletrack descents.

Located just a few kilometers outside of Whitehorse, the climb up Grey mountain is an unrelenting 13.63 km path with 817 m of elevation. The so called “Money Shot” is worth the climb, cyclists get rewarded with a panoramic view of the surrounding landscape. If you want to complete the full climb, be sure to bring a bike that can handle a bit of gravel, the last 2 km of the segment goes off-road and onto the Grey Mountain summit trail.

For those looking for a hard, technically challenging off-road climb, Mountain Hero offers a rugged and rewarding segment, with a 982 m of elevation. Much of the trail access follows the path of a 1905 mule trail built as an old access route to the Mountain Hero Silver Mine.