We turned off the road onto something that didn’t look rideable. It wasn’t doubletrack as much as a car-wide route through the woods, littered with long craters of water, deep enough to wet your bottom bracket and even your axles. I’ve since started calling that stretch Ypres. Or Somme. I was getting treated to some of Peterborough and the Kawartha’s hardcore gravel. 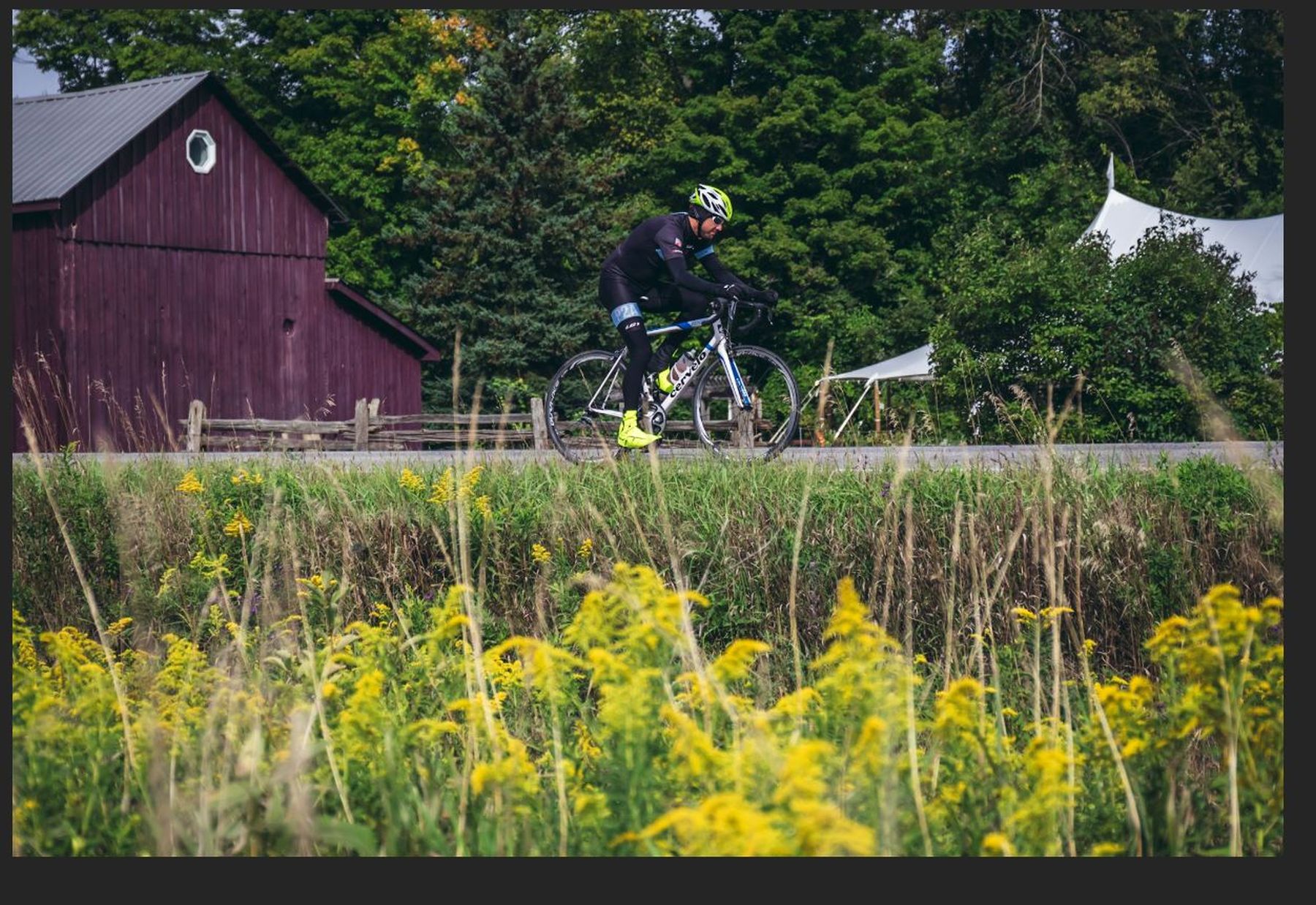 Our gravel sommelier was Kieran Andrews. He’s one of the principals at Wild Rock Outfitters in Peterborough, Ont. He’s been riding the local roads for 26 years. The day before we hit Ypres/Somme, in early May 2018, he had taken us to Sweeney Line. It wasn’t, however, the time to sample that vintage of gravel as a road grader had passed over the surface before we arrived. The potholes that had formed throughout the winter were gone, but until the surface settled, its dirt would be mushy, making for a slog in the saddle. Before we got to the pebbly craters of Ypres/Somme, we had some pretty straight-ahead gravel. It was fast and fun, but its demands could sneak up on you. One rider in our group who was riding skinny tires got a little slippy on a descent, but pulled it together just in time.

The soggy route was also fun. I got a soaker going through a particularly deep puddle. I could ride most of that forested route to the next paved road, but not all of it. I was on a road bike with 25c tires, which I only found wanting for about 25 m of the whole 105-km ride. Two other riders had 25c, another 28c, and yet another 30c. Jeff Wills, the founder of Reggie cycling apparel, had the widest treads. “Whenever I ride underwater,” he said, “I ride 38-mm Rene Herse Barlow Pass tires.” The gravel in Peterborough and the Kawarthas is quite democartic. You really can run what you brung. Still, wider rubber is better, especially for the really challenging bits.

The bumpy roads are easy to get to. As a downtown Toronto dweller, I was a bit disoriented early in our ride. We’d started in the centre of Peterborough, among traffic and stop lights, and in what seemed like minutes, we were on country roads without any cars. I’m used to 30 to 50 km of sprawl before I see anything like the roads we were on. In minutes, it felt as if we were far into the country. Yet, soon we’d be back among the urban comforts necessary for post-ride recovery: top restaurants and breweries. Peterborough is a right-size town with outsize riding surrounding it. “I purposely chose to route us to more remote-feeling settings,” Andrews said about the gravel ride. “But, in some cases, we were less than a kilometre away from a small town with cafés and shops.” 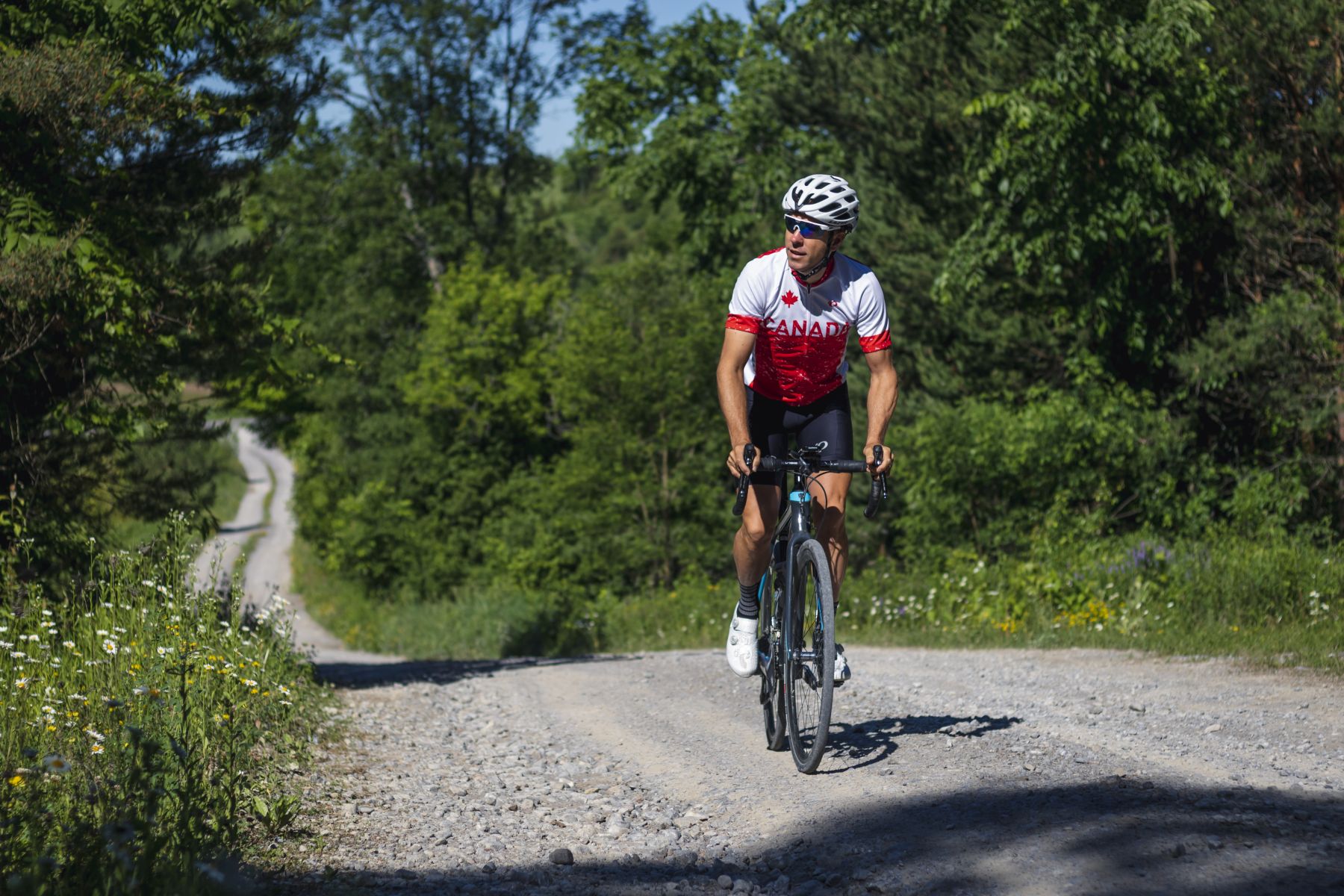 Around seven years ago, Andrews and other keen cyclists in the area started working on a cycling map to make it easier for riders to discover the roads in the area. Later, Peterborough and the Kawarthas Tourism (PKT) took notice. “As we saw the growth in interest in the map,” Kelly Jessup, PKT corporate marketing officer, said recently, “a variety of research studies were popping up touting the economic impact of cycling and the importance of cycling as an economic driver, not only for tourism, but for the improved development of communities with a focus on active transportation. Both the City of Peterborough and the County of Peterborough were working on active transportation master plans, which included cycling as an important component.” Things were really moving on the cycling front.

In 2015, Peterborough and the Kawarthas came to my attention as a cycling destination. In May of that year, PKT and Shimano Canada launched the Peterborough and the Kawarthas Classics, signed bike routes that were a natural extension of the work that had been done for the cycling map. (The map, “Peterborough & the Kawarthas Cycling & Trails,” is now in its fourth edition.) Back then, some of my Canadian Cycling Magazine colleagues and I drove one and a half hours northeast from Toronto to Peterborough to check out the new routes. It was a sunny spring day. The roads were quiet. Since then, I’ve jumped at every chance I’ve had to ride in the area.

This past spring, PKT put together a little experiment. They called it the Pedal, Paddle, Pint pilot. While I laughed at the heavy alliteration in the name, I was also excited to participate. They were planning something that combined the two most important outdoor activities of my youth. (Beer drinking didn’t start until I began canoeing less. Strange, that…) In May, a collection of folks connected with tourism started the three-day pilot with a ride from Wild Rock Outfitters. On the first day, we rode southwest to Millbrook and the Pastry Peddler Café. Even though I had spoken with co-owner Colin Hall a few times for stories in this magazine, this would be my first visit to the café. The bike parking in front was dialed, naturally. For mid-ride fuel, I opted for a sandwich with a salad, followed by a butter tart and an espresso. It was just the stuff to get me up the climb on Zion Line that was right around the corner. Above the Pastry Peddler is the Frog Cycles shop. To get to it, you climb this wide, old staircase. Before the staircase splits both left and right near its top, you come to three high, multi-pane windows. The centre one backlights an old cruiser. Everything feels a little reverential. 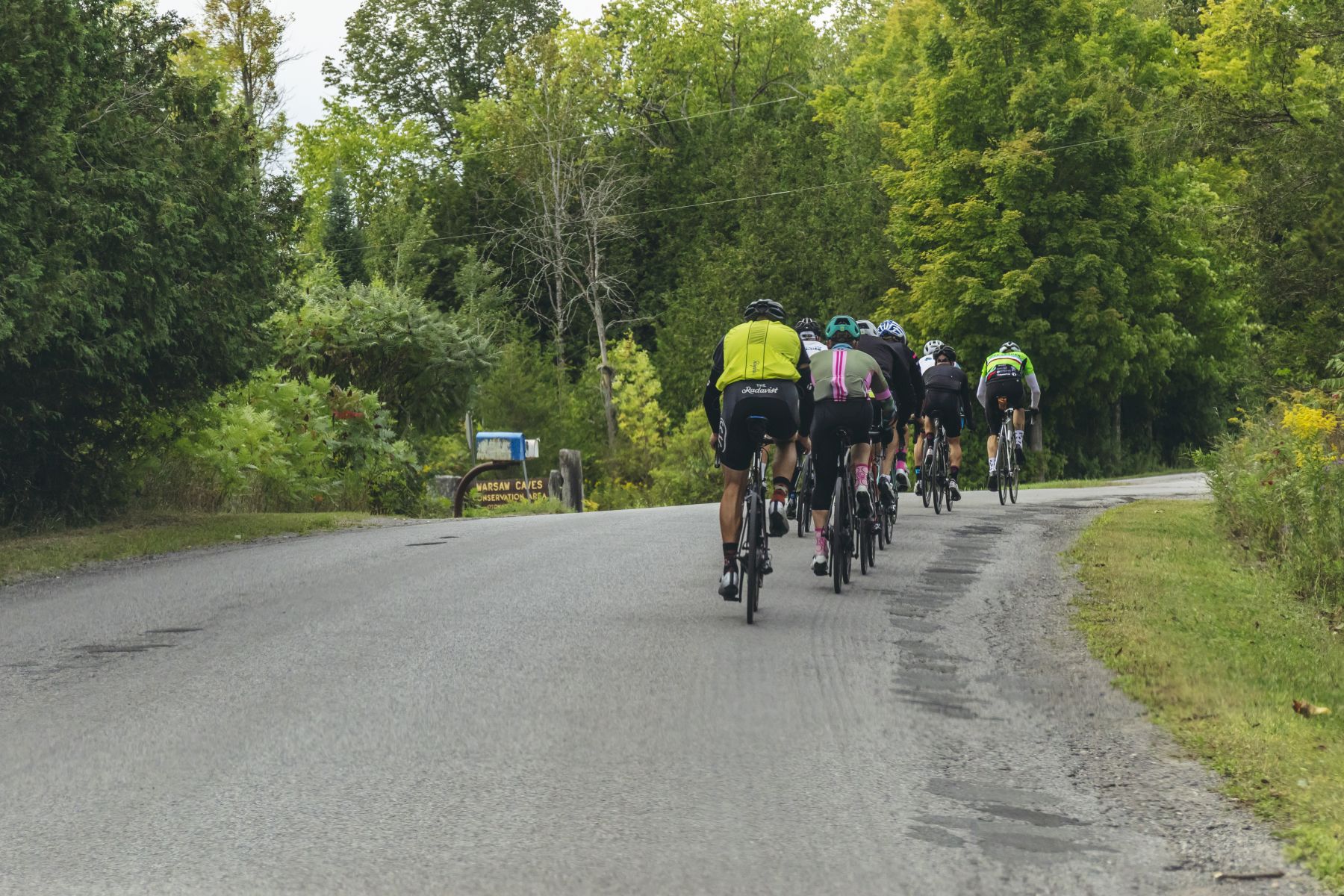 The next day featured a paddle on Lovesick Lake. It started out cold, windy and rainy, and finished kind of cold and windy. It was a nice challenge for the arms, shoulders and lower back. For the final day, we were once again using our legs to pedal to Lang Pioneer Village, southeast of Peterborough. The route took us on some roads that Andrews had shown me the year before, including a lovely gravel stretch on Knox Road. I thought about how these cycling gems were pretty rare and not within easy cycling distance from my home. Urban sprawl does a number on country roads. Recently, I asked Andrews about gravel roads near Peterborough. Would he have to start a local equivalent of Association Les Amis de Paris-Roubaix? Instead of preserving disappearing pavé, would the Friends of Peterborough Gravel Association have to save dirt roads from getting paved? Andrews doesn’t think that will be a problem. “If anything,” he said, “our gravel riding is getting better as the years go by.”

Music to the ears of any gravel rider. 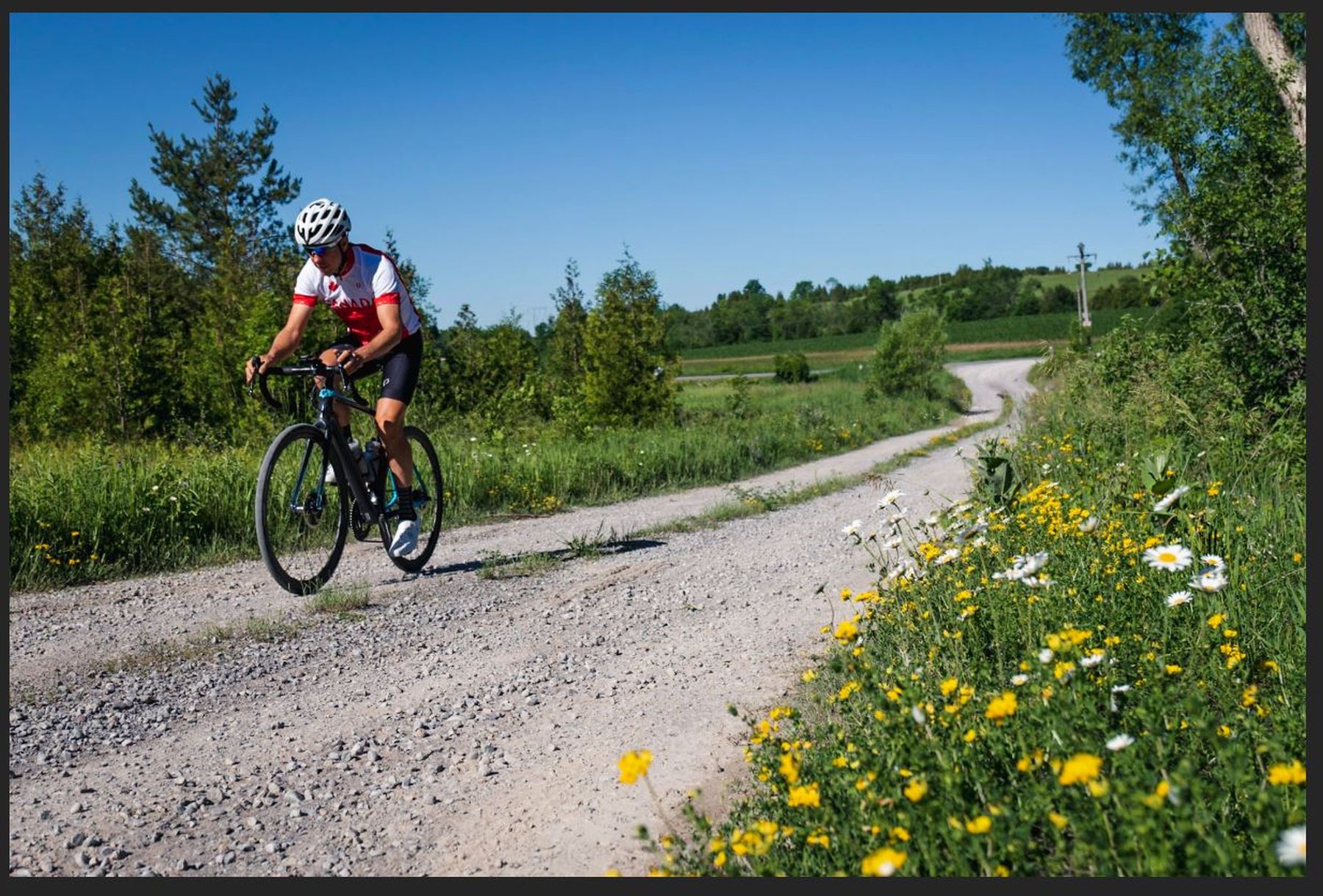 Getting there Peterborough is 140 km northeast of Toronto and 270 km
southwest of Ottawa, both driveable distances. There are a few shuttle services from Toronto Pearson Airport, including Benson Services and Century Transportation.

Rooms on the east side of the Holiday Inn Peterborough Waterfront have a great view of the Otonabee River. The Peterborough Inn and Suites Hotel is a cosy place right downtown. Both are bike-friendly.

Where to eat and drink

A cycling hub in town is the Silver Bean Café on the Otonabee River. Ashburnham Ale House, right on the Rotary Greenway Trail, is great for post-ride fuel. For a stunning selection of Belgian beer and excellent food, St. Veronus Café and Tap Room is the place. Head to Smithavens Brewing Company and try Schwarz, the craft brewery’s black lager. If you ride to Millbrook, a stop at the Pastry Peddler Café is a must.

Where to go mountain biking

While Peterborough and the Kawarthas has great road and gravel riding, there’s some pretty stellar mountain biking, too. A prime location is the Harold Town Conservation Area, which features more than 10 km of trails, both flowy and technical.

Where to combine cycling and canoeing

Soon, Peterborough and the Kawarthas, along with Wild Rock Outfitters and the Land Canadian Adventures, is launching its Pedal, Paddle, Pint package. On a threeday trip, you ride on the first and third days, and canoe on the second. Throughout, you get to sample some of the top craft brews in the area. It’s a great package for cyclists and canoeists of all abilities.

Where to ride a party bike

This past July, PedalBoro hit the streets of Peterborough. It’s a 15-passenger bike that will take you on food and brew tours in town. Not a bad way to sample and then burn carbs.

Where to find support

At Wild Rock Outfitters you can get your bike repaired or even rent a bike for your rides around Peterborough and the Kawarthas.