In a partnership between WTRL, Zwift, Zwift Live and Zwift Community Live, WTRL has kicked off the second season of a multi-week seasonal team-based league: The Zwift Racing League. Beginning Jan. 11 and 12 cyclists from around the world and across multiple divisions will compete in the team-based events.

The Zwift Racing League features a “Premier Division”, an invite-only league that is managed and run by Zwift. 75 per cent of the teams racing in this division come from the Zwift community, while there are also several invited wild-card entries from professional cycling teams and/or the Zwift community.

Feeding the premier division category are a number of geographically based leagues with multiple community divisions. About 15 teams compete in each division and these categories are open to all. At the end of the season top teams from APAC, EMEA East, EMEA West, AMERICAS E and AMERICAS W divisions will be invited to race in the Primer Division for the following season, and will receive fully customized in-game team kit from Zwift. 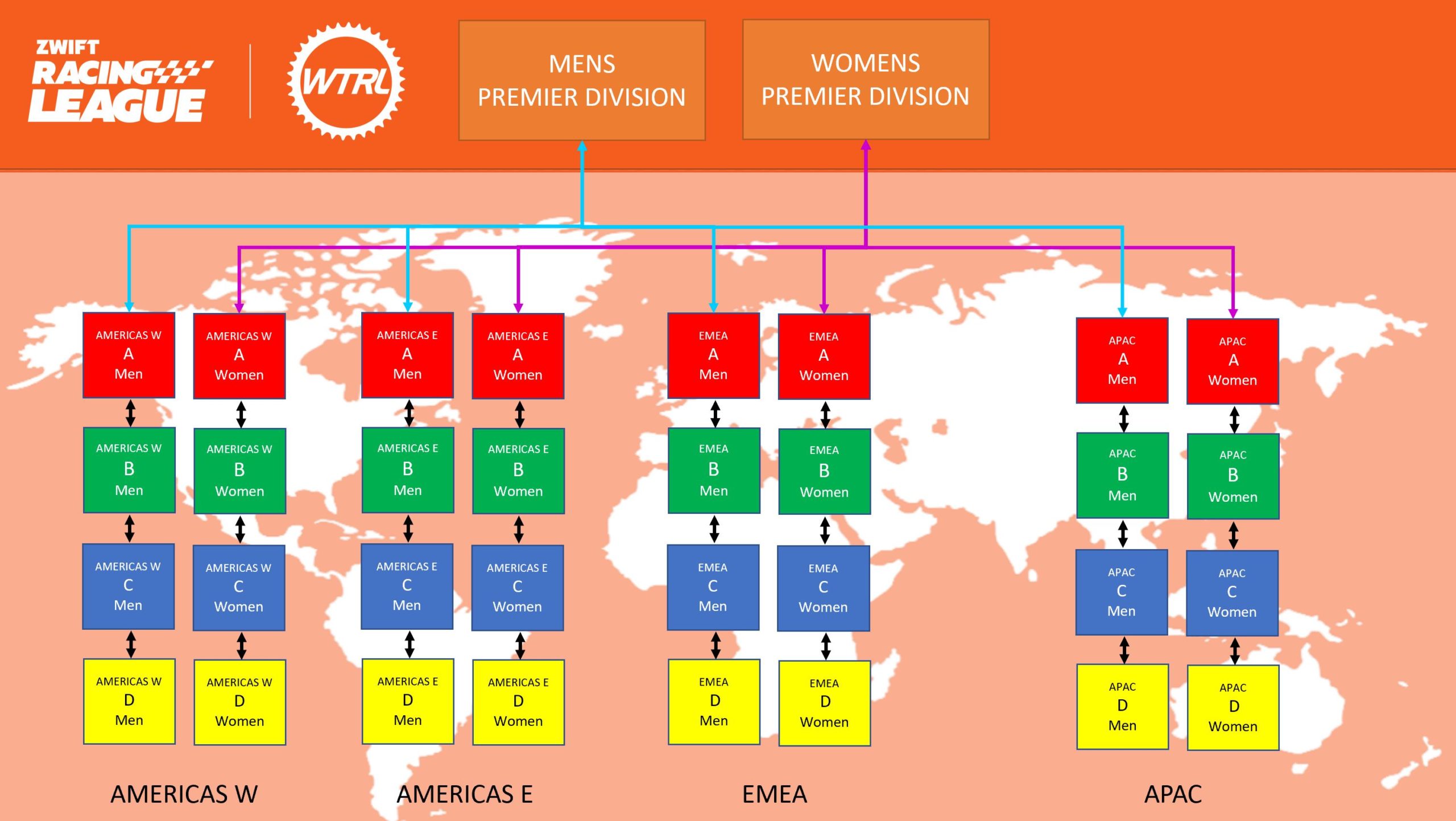 The seasons are fast—there will be three to four seasons of the Zwift Racing League each year with races scheduled across time-zones. Though there is room for teams doing well to move up, the same is also true for teams who aren’t performing. When three teams move up into higher divisions three teams also move down a division.

For season two of the Zwift Racing League, men’s and women’s premier division teams will compete on Mondays and the community divisions will compete across multiple events on Tuesdays. Both the premier division and community division are supported by live broadcasts on Youtube. WTRL also puts out a weekly round-up show every Friday that features all the action from the Zwift Racing League that week and looks forward to the week ahead.

Events for this season consist of team time trials and scratch races, which will incorporate a number of intermediate bonus points.

Teams are divided into men’s and women’s categories, and classified using the ZwiftPower rider categorization system. This categorization means any rider can race up but, for example, teams in the C league will not be permitted to use any rider above the C grade, such as an A or B rider.

In all races riders can score points for both their finishing position and from intermediates sprints and climbs. At the end of the race these scores are combined to give a team score and converted into series points.

Teams are required to register their entry with WTRL and all races will require a special team specific joining link to be able to enter the pens and participate in each race. In the community divisions up to six riders from each team can compete in a race.

Anyone can compete in these events, so if you’re missing the thrill of outdoor racing grab a few virtual teammates and try out the competitive racing league.