A group of cyclists riding on the road can take various formations depending on riding conditions. When hammering perhaps a single file paceline will be favoured because only one rider wants to take the wind. On a casual coffee ride, everyone will want to ride two-abreast to hold a conversation while on busier roads with a shoulder single file may suit the group best to stay out of the way of fast approaching traffic. 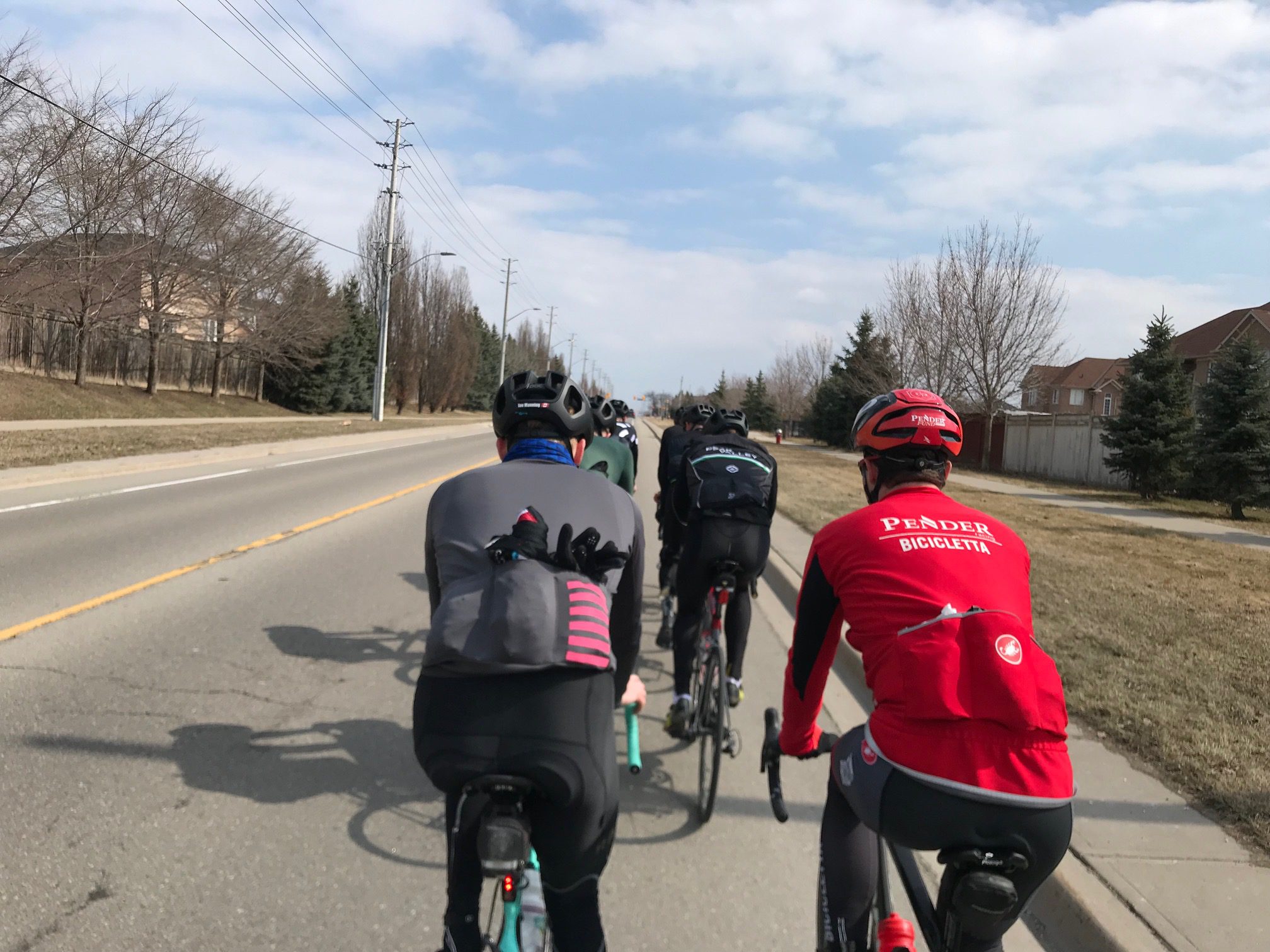 But what is the safest formation to ride in? That depends on a lot of different factors including the layout of the road you are riding on. Being predictable and obeying the road laws will help keep the group ride fun and incident free. So here are some guidelines for cyclists on when they should ride single file and when they should ride two abreast.

Is riding two abreast against the municipal road laws?

When two abreast is smarter and safer

There are many good reasons to ride two abreast. It’s arguably in many situations safer and it’s much more social. Apart from it being more pleasant to keep a conversation, riding two abreast will also ensure cars can pass a group safely.

Riding two abreast is safer when a group of riders are travelling on a road with one lane in each direction which are not wide enough for a motor vehicle to pass even a single rider while staying in the lane. When the driver already needs to move into the lane of oncoming traffic to make a safe pass, riding two-abreast will take up less distance on the road so once the way is clear the pass of a group of riders can be made quicker.

On roads with two lanes in each direction, slower moving vehicles including cyclists should always take the right lane. In this situation, riding two abreast is once again safer because vehicles already need to change lanes to make a safe pass. Even if you are riding single file, on roads like this moving towards the center of the lane to encourage drivers to pass in the other lane is the smart move.

One quiet country roads, riding two abreast shouldn’t be an issue. However, you’ll want to be prepared to move into a single file formation if a vehicle approaches to pass the group or the road narrows.

When to ride single file

On roads with one lane in each direction with shoulders and oncoming traffic that is quite heavy, cyclists should consider riding single file. This way, a driver making a pass will have space to move by the group at a safe distance without needing to move into the lane of oncoming traffic which might not even be possible. However, if the road is narrow or the shoulder disappears, cyclists should be prepared to take the lane to avoid situations where drivers are staying in the lane to overtake cyclists at an unsafe distance.

On roads with one lane in each direction where the lanes are wide (~5 m) so a vehicle can safely share a lane with a cyclist while passing, riding single file is once again the right thing to do because slow moving road users like cyclists must ride as far to the right as is practical. You should not ride two abreast impeding traffic when there would otherwise be a safe space for a vehicle to pass a single rider. 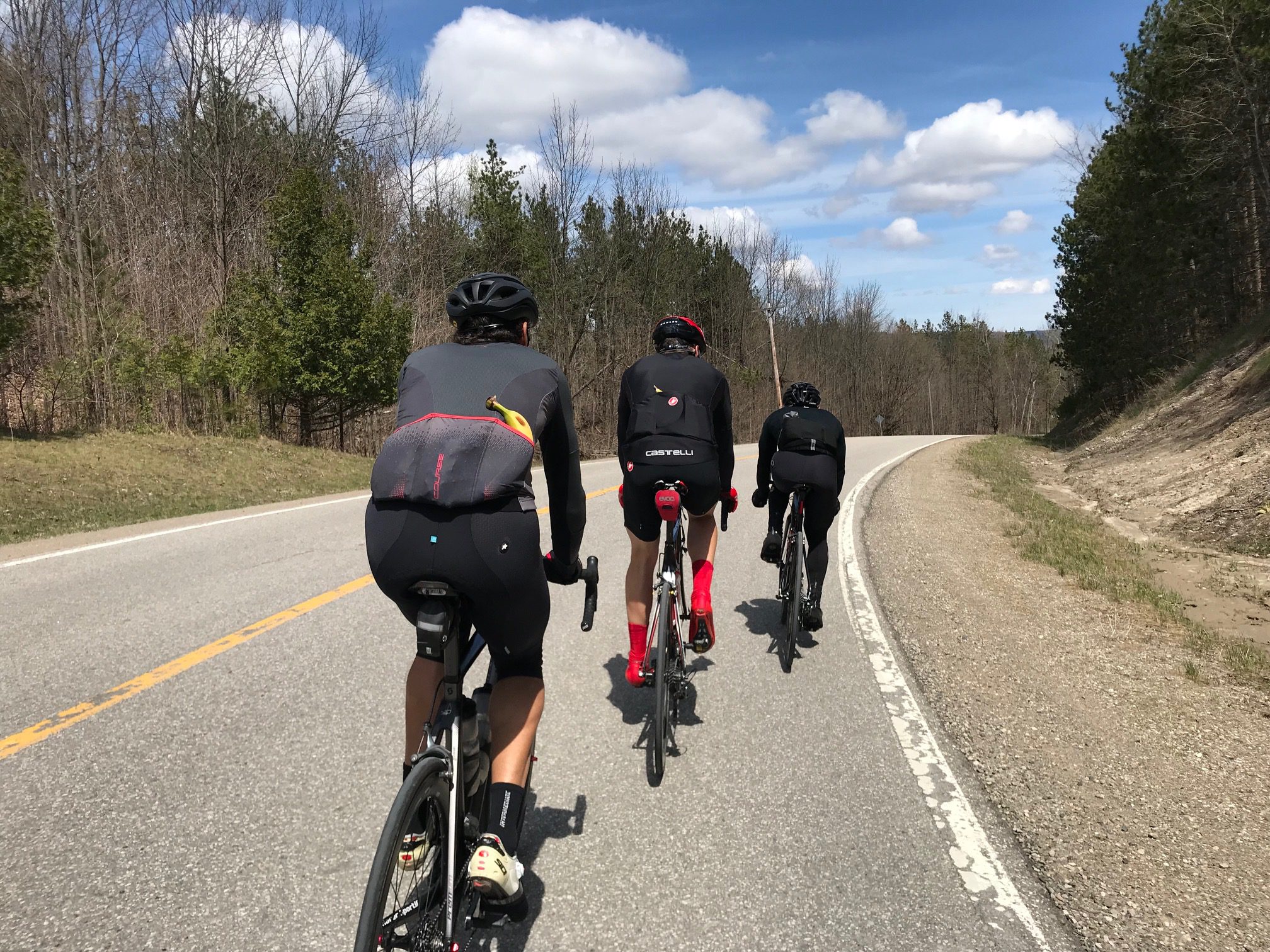 While ultimately, cyclists need to trust passing drivers to move by them responsibly and at a safe distance, making smart decisions on when to ride single file versus two abreast can make sharing the road clearer and easier. Cyclists should try and give drivers safe opportunities to make passes and ensure their group is not impeding traffic when they don’t need to be. Sometimes riding two-abreast gives drivers a clear signal that to safely pass the group they need to move into the other lane of traffic.