Motivation is everything, as they say, and some riders sure can be clever in finding ways to keep fit inside. If you’re tired of the same ole ride, here are some folks with some very interesting ways to stay active indoors. If you thought riding 100 km during the holidays for the Rapha Festive 500 was something, check out some of these ambitious athletes.

For those who are gluttons for climbing punishment, you can actual do a virtual Everesting effort, that means climbing 8,848 m on your trainer. As with outdoor Everesting efforts, there are a number of rules you have to follow, including that it be a continuous ride (you can stop to eat and go to the bathroom, but you can’t sleep along the way. You can take two hours to sleep if you want to do a “double Everest.”) 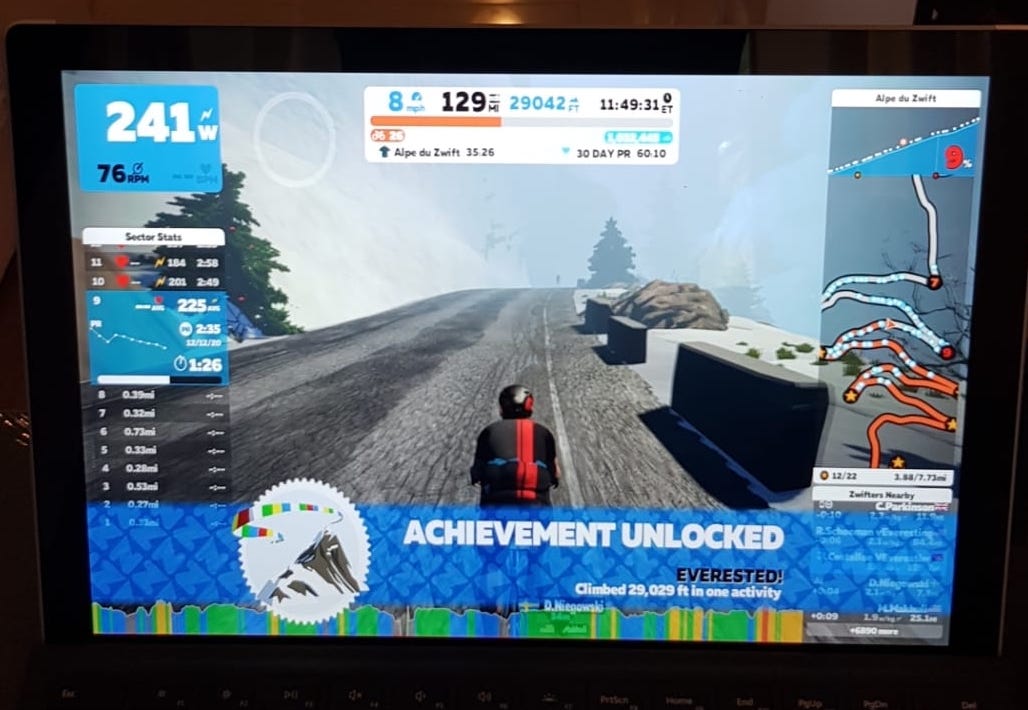 You can take on your Everest challenge through the Zwift platform, but that’s not the only tough workout to be found on the popular indoor program. The “Uber Pretzel” includes 2,335 m of climbing in just over 128 km of riding.
For some, though, that’s simply not enough. Canadian Ed Veal rode 952.6 km during a 24-hour ride on Zwift in 2019, which earned him a Guinness World Record for the “Greatest virtual distance on a static cycle in 24 hours.”
Canadian Ultraman world champion Jordan Bryden had his own 24-hour Zwift challenge.  He did 24 hours of Zwift Tempus Fugit loops, which works out to be one loop every hour.

Riding for hours inside can be tough. You take your eyes off the screen, look outside, find a distraction…and thirty seconds have gone by. So everyone knows how tough it is sometimes to crank out some miles indoors.

“5 hours in the dark garage with no music no fan,” Mary Eggers shared. “Before there were smart trainers, it got me ready for IMFL!”

“Hard 7 hour workout written by Tara Norton on a trainer alone in my basement preparing for UMAZ 2020 the race that never happened that year,” Anne Margaret posted.

“One hour roller workout, no TV, no Internet,  just music and a wall,” David Harrison added.

How about tying in your favourite game on the tube with a workout?

5. RAAM prep on the trainer

Canadian Ultraman extraordinaire Tony O’Keeffe had an incredible indoor session to get ready for a long-distance cycling race, the Race Across America (RAAM).

How about using your next bike workout to catch up on your favourite movie series? Canadian pro Angela Naeth likes to watch movie(s)..plural.

“Bourne Identity trilogy ride,” she shared, as her films of choice for a six hour indoor ride.

The original version of this story appeared in Triathlon Magazine, written by Kevin Mackinnon