In this recurring series, Canadian Cycling Magazine will take a look at the Monday to Friday training programs of some of Canada’s top cyclists. From the hours on the bike to the other activities and training that gets incorporated into their plans, we will get a glimpse on how Canada’s top road cyclists prepare for some of the worlds biggest races. Here is what a week of off-season training for Michael Woods looks like.

Michael Woods has seemed on the cusp of a big WorldTour result since he joined Jonathan Vaughter’s squad in 2016. Last season, he came out in a big way with second at Liège–Bastogne–Liège, a stage win at the Vuelta a España and an astounding third at the world championships. How does the former 1,500 m runner turned one of the top climbers in professional cycling train during the off-season? Woods gave us a detailed outline of his training week from Nov 26 to Dec 2, 2018 for us to get a glimpse of what it takes to prepare for a WorldTour season.

Quality training in the off-season

“It is pretty hard for me to summarize a typical Monday to Friday as, based off the training that my coach—Paulo Saldanha—gives me, and the nature of my lifestyle and job, I am constantly changing things up,” Woods explained about his approach to training throughout a typical year. “In season, each week finds me doing something different: travelling, at a training camp, recovering at home or racing. With typically 80 plus race days in the season, inconsistency in my lifestyle is what is most consistent.”

The off-season doesn’t bring any more consistency for Woods with team sponsor events, fondos, visiting friends he doesn’t get a chance to hang out with during the season and trying to catch up on things he’s lost track of during the season.

“The only time where I am able to really hunker down and do consistent work, is often from November to December. This period is crucial to my season, as it is one of the rare moments in the year where I am in one place for an extended period of time and where I have few distractions,” Woods explained. “If I have a solid and consistent November and December I find the work that I do carries me through the entire season.”

During these months, Woods says he usually rides between 20 and 33 hours per week. The week of training outlined below is what Woods considers fairly typical for that time of year. He was in Girona.

Training program for a week in November/December for Michael Woods

Woods: In the offseason, I like to run a bit. Walking/running is something I think we neglect too much as cyclists (in a Grand Tour I will hardly walk at all; maybe 5 km over the course of an entire month) and I think adding a bit of impact stress to the body in the offseason is important.

A lot of my lifting and core work was designed by a local guy from Ottawa named John Zahab. This program really focuses on muscle activation and simply doing the work properly. I don’t aim to kill myself in the gym, but I aim to perform each drill properly.

In the offseason, my coach Paulo and one of my main sponsors, B2Ten, aim to improve my weaknesses. Last year we spent a lot of time working on my seated power. This year, although my descending has improved significantly since I started racing, we still identified it as a weakness. Therefore, we hired the help of Oscar Saiz a former world cup downhiller, and I worked with him at least once a week on my descending technique.

Woods’ coach Saldanha prescribed an hour warm-up followed by a hard effort up the famous Girona climb Rocacorba starting at 350 to 380 w and trying to build up to 400 w for the last 3 to 5 minutes. Rest of the ride was to be easy.

I felt good that day and ended up going harder than prescribed at the start and had a really solid 30-minute effort,” Woods said about the ride. “I averaged 410 for 30 min on a key climb in the Girona area.

After my workout, I went to the gym and did a 35 min sauna session. I spent 15 minutes in the sauna that is roughly 80 C then 10 min rest, then another 10 min in the sauna. With Tour Down Under being my first goal of the year, I needed to get heat adapted, so the sauna was an important tool for this.

Woods’ coach wanted him to do a 30 min warmup followed by three intervals of 10 to 15 minutes on a flat stretch of road. “I want them just slightly above comfortable pace but slower than race pace. The exercise here is to (without seeing the power) see how close you can come from one interval to the other. So if one is 330 w, can you be within 5-10 w effort between each?”  Saldanha wrote to in his training program.

Another weakness of mine is pacing in the TT position, so this workout was designed for me to do just focus on riding by feel. It was largely a success where I averaged between 330 and 350 watts for each interval and felt smooth.

45 min gym session in the pm

I felt good on this ride and tossed in a few 6 to 10-second sprints. The goal of this ride was just to burn the kilojoules and keep it all in Zone 1 and 2. I averaged 207 watts for the day,” Woods said about his mid-training week ride.

This was a nice recovery spin, and I made sure to stop at a coffee shop.

Gym session in the p.m.

Big kj burn day. I ended up hitting just shy of 6000 kj for the day

Saldanha wanted Woods to throw in variable efforts across his power spectrum during this ride. That meant he would do some sprints, tempos and shorter efforts throughout the ride.

For this one Paulo wanted me to go by feel. Due to the big volume of the week, he wanted me to just do some hard efforts, but to trust in my instincts. Having now worked with Paulo for six years we have developed a strong relationship and level of trust, where I generally have an idea of where his head is at, and he trusts me enough to listen to my body and understand what I need.

Stats of the week: 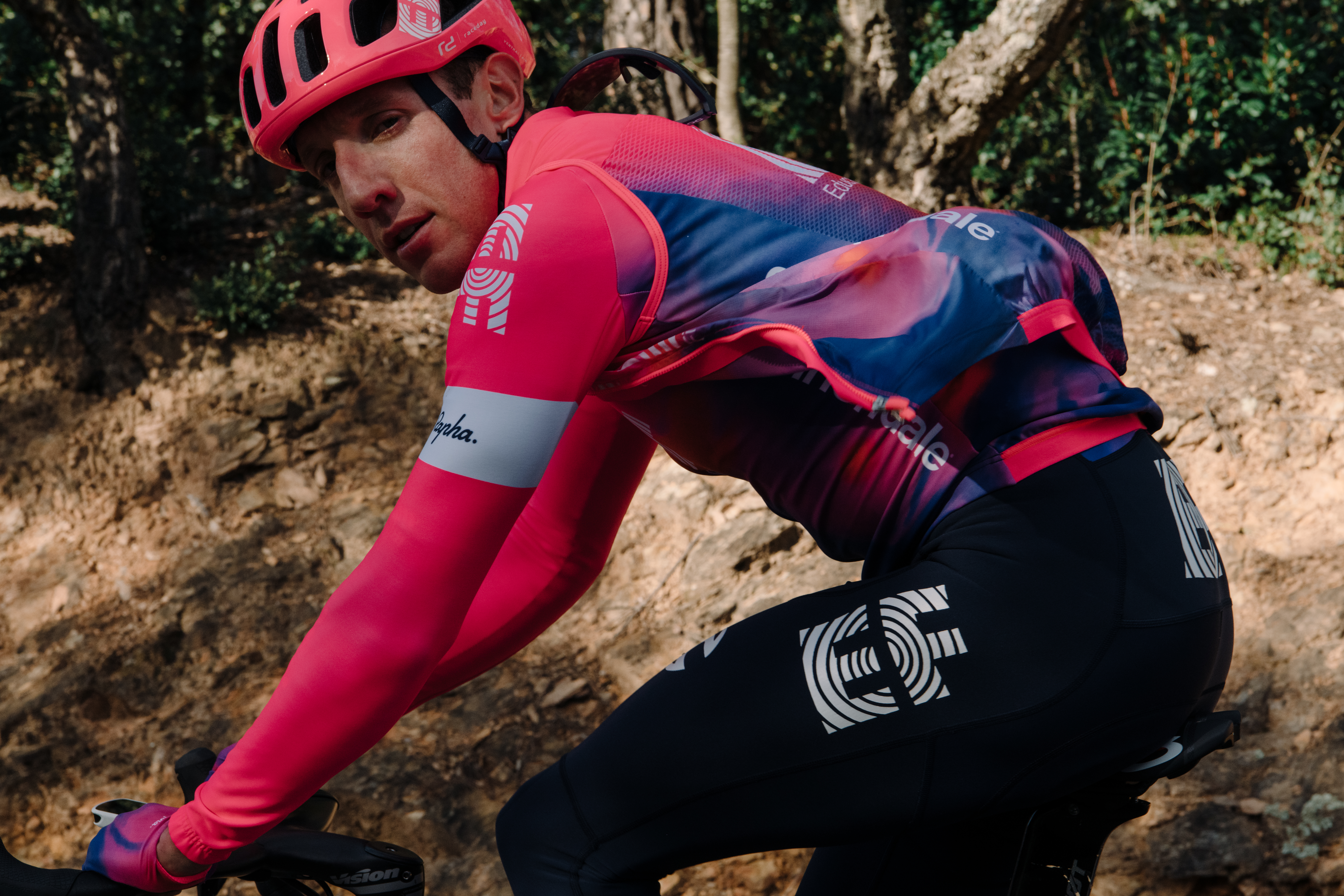 Woods: I would also like to add a footnote to this training week. When I was in high school, as a runner, I would look at the training regimes of pros, and I would get carried away and try to replicate what they did. However, this was always a mistake and I would often get injured.

Unlike 99 per cent of people who ride or compete in endurance disciplines, an older pro, such as myself, has had years of developing their body in order to accommodate this load of training. Furthermore, as a pro athlete, this is my only job, and my entire day is oriented around tackling these workouts. Because I do not have a deadline to meet at work, because I can take a nap mid-day and have a dialled nutrition plan, and because I have an entire integrated support-team established by B2Ten, and an excellent working relationship with my coach, I am able to maximize my performances in these workouts, and train like this consistently.

When I worked a full-time job and I first started riding, a week like this would have ruined me. Even as a neo-pro a week such as this would have been my biggest. However, now with the grand tours that I have done, and the experience and support that I have, this is now a more typical week in my November/December training block.

Woods is currently racing the Tour Down Under and has spoken about his ambitions to ride the Tour de France in 2019. The past two seasons he’s tackled the Giro d’Italia and Vuelta a Espana along with the Ardennes Classics which remain one of his main goals of 2019 after his success there last year.

A big week of off-season training with Michael Woods

A week of winter training in Montreal with James Piccoli

A week of winter base training with Leah Kirchmann

A week of winter training in Canada with Catharine Pendrel

A winter training week focused on recovery with Haley Smith

A week of winter training with Sara Poidevin