You shouldn’t have to feel unsafe cycling anywhere, but, the reality is, riding in a place where cars don’t give you enough space can be a scary experience. Between 2006 and 2017 there was an average of 74 cyclist deaths in Canada per year, a stat that should make anyone (cyclist or not) upset. Ideally, all Canadian cities would take more measures to ensure the safety of vulnerable road users, but at the moment there is still a level of risk involved with simply getting on your bike and riding through the city. While out on the road there’s not much we can do to change car’s behaviours, but there are a few measures you can take to put your mind a bit more at ease.

The most obvious trick to feel safer is to map out a route that takes advantage of local bike lanes. Most cities have a map of bike lanes available, and Google maps will tend to guide you to bike paths if you select cycling directions. OpenStreetMap can also be a helpful resource for cyclists looking for bike paths, and Strava’s Heat map can lend some insight into how commonly cyclists ride on a road (or any common detours).

If you’re nervous about drivers, ride on roads popular with cyclists—even if the city hasn’t yet installed bike lanes in the area. Drivers will be more accustomed to looking out for cyclists and studies have shown that the more riders there are in an area, the safer the roads are for cyclists.

If you’re feeling anxious about riding on a street without a bike lane you’ll probably instinctively ride as closely to the curb as possible. It sounds counter-intuitive, but putting some distance between yourself and the edge of the road is actually safer.

When you ride close to the edge of the road, drivers will be more likely to pass you with too little space. In Canada, seven provinces and one territory have safe passing laws in their traffic regulations. Most require drivers to give at least one meter of space when passing a cyclist. If a driver can’t give you that space, they shouldn’t be passing you—even if you’re squished up against the side of the road.

Drivers are looking directly ahead when they’re driving, so they’ll also be much more likely to see you and adjust accordingly if you’re in their field of vision. This becomes particularly important at intersections, where cars driving in a perpendicular direction will be glancing only at the middle of your lane for other cars.

It might seem intimidating to take up space, but once you get the hang of it you’ll feel much safer on the road.

Ride like every parked car that you pass is about to open its door or pull out of a parking spot. It’s impossible to predict when someone will open a door, and, as the Dutch reach has not yet been popularized in Canada, it’s safest to just assume a driver won’t be looking for cyclists. 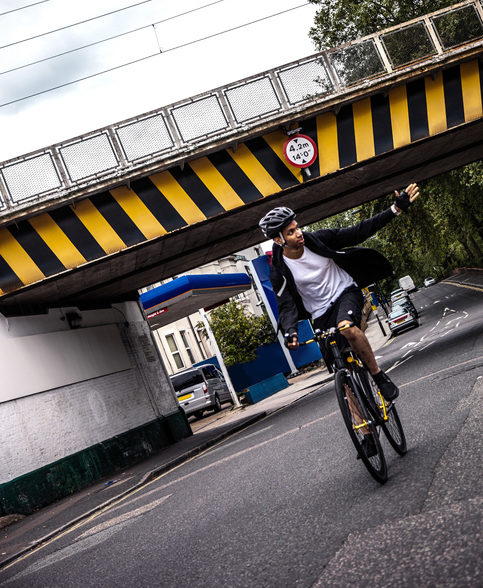 Point to where you’re going

Traditional cycling hand signals are good practice, but old fashioned pointing can be an easy way to clearly communicate with the cars behind you. If you want to make it explicitly clear that you’ll be turning or changing lanes, an arm extended with a finger pointing in the direction you’re moving will very simply communicate your intention to other road users.

When you’re riding with another cyclist, especially one with more experience, you’ll sometimes feel pressure to go faster than you’re comfortable with or ride in a way that makes you feel unsafe. Communicate how you’re feeling—biking should be enjoyable and nobody is getting points for riding recklessly on busy streets.