In many provinces, group rides have finally started up again. As a new cyclist, it can be a bit stressful to join your first “official” ride with others, but you’ll be surprised at how quickly it becomes second nature.

There are a few signals you need to know before you join a group. Where possible, it always helps to call out along with a hand gesture, to give cyclists behind you two ways of knowing what’s coming up ahead. These gestures can vary regionally, or even by group, so be sure to review with a ride leader the first time you join a ride.

As a rule of thumb, if there’s something on the road that you would swerve around, point it out to the riders behind you. Often that will be a hole (which can be called out as “HOLE!”) but it could also look like an unexpected bump in the road, debris, a pylon or a Mario Kart banana.

One of the most important things to indicate on a group ride is your intention to slow down or stop. When riding in a bunch, a cyclist stopping unexpectedly can cause a crash or even a pileup.

There are a few ways to signal that you’ll be stopping or slowing. As with many other gestures, it helps to yell “stopping!” or “slowing!” along with the hand movement. A hand dangling to the side with the palm showing indicates a plan to stop (top left). Pumping a hand (almost like petting a dog) means slowing down (top right) and raising a flat hand above your head (bottom) means “I’m stopping and pulling over,” most often due to a mechanical issue such as a flat. Hand above the head will sometimes also be used in a very large group to indicate stopping.

A flat palm moved back and forth will indicate loose debris such as sand, gravel or even glass. Be sure to call out the nature of the debris to alert others of what they should be looking for.

As you would when riding solo, always indicate your intention to turn by pointing. Some cyclists will prefer to extend their left upper-arm out to the left (horizontally) and angle their forearm vertically upward to indicate a right turn.

If you’re coming up to train or streetcar tracks put two fingers behind your back and yell “tracks!” Some will also cross their fingers, pay attention to what others do around you to figure out which you should use.

Cars parked in the bike lane, pedestrians on a multi-use trail or other large hazards will require you to move to the left to avoid them. Indicate this to the group by moving your arm behind your back in a pulling motion.

When a street narrows or a bike lane ends, it’s sometimes necessary to move from riding two-by-two to riding in single file. Raise one finger above your head to indicate you should be riding one by one.

A simple elbow flick will indicate that a rider is done “pulling” (riding on the front of the pack) and that they intend to pull off to the side and slot in to the back of the group. 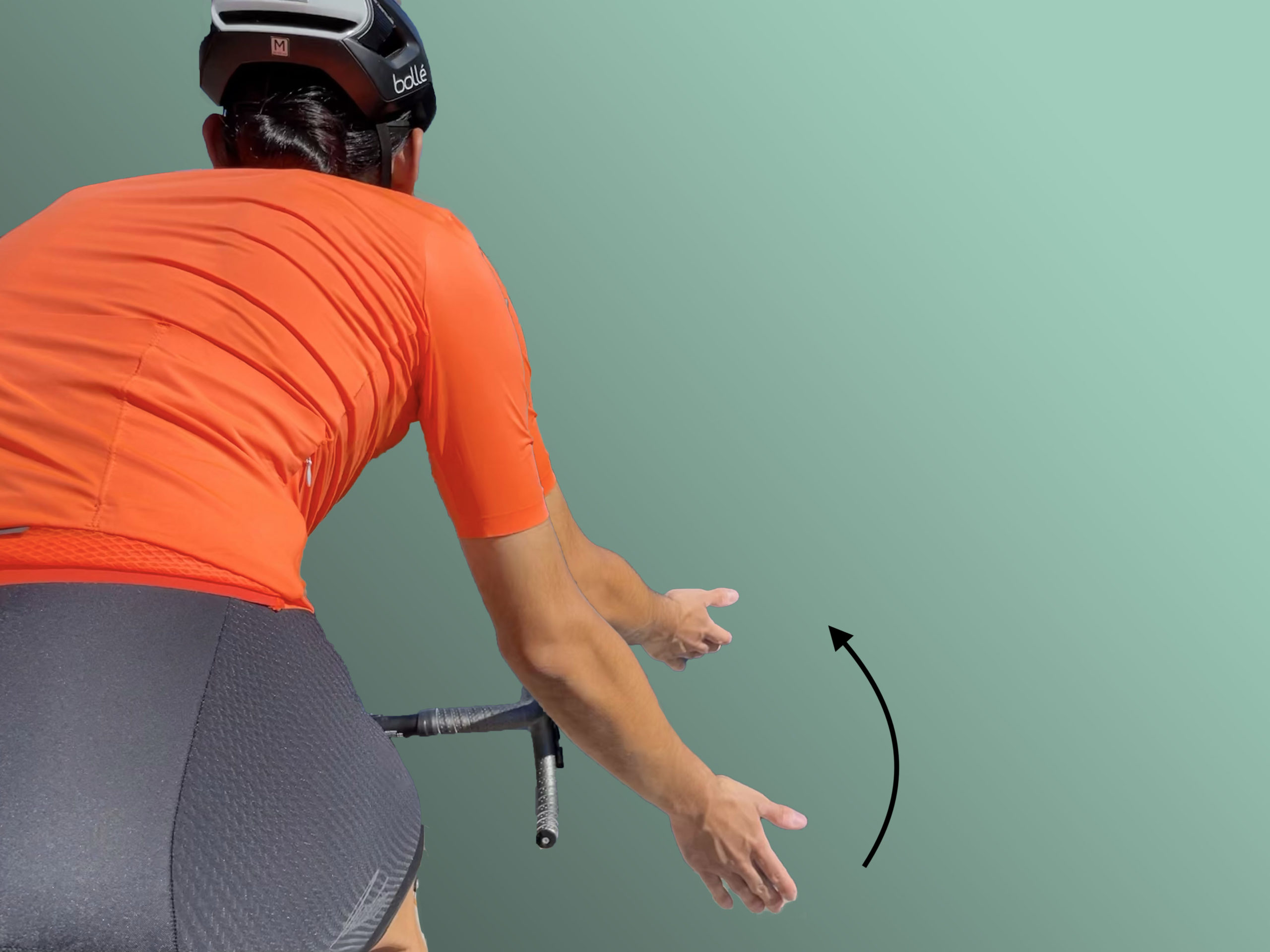 Sometimes a rider doesn’t have the energy to pull through to the front of the group, or they may simply have other preoccupations where they are. This intuitive gesture means: “go ahead.”