Ryan Atkins of Sutton, Qc. took on Unbound Gravel 200 this weekend and, despite four flats, he still managed to finish the 206-mile race in 13:04:10, 61st overall. “I think I wasted 25 minutes on my first 2 flats,” he says, “I was in roughly 800-900th place.” Despite the setbacks, he says he felt strong until the finish line. What was his secret? A background in this type of long-distance cycling event definitely doesn’t hurt, but he attributes some of his performance to successfully planning the nutrition for his race.

RELATED: Seven Summits is your riding challenge for 2021, and it’s really, really tough

At 76kg, drafting 20 per cent of the race, Atkins burnt 9,000 calories. “Once you wrap your head around that number, you can start seeing how important fueling is,” he says. “The harder you race, the harder it is to eat and the more sensitive your stomach becomes.”

Before the race, Atkins fueled up on a Beet powder from BeetElite to make his blood more effective at transporting oxygen. For breakfast, he ate 500 calories of rice and nut butter. “White rice is easily digested and a great pre-race meal,” he says.

He brought a large top tube bag, which fit most of his nutrition (“actually, much more than I needed,” he says.) “I brought a bunch of UnTapped maple products (maple syrup, waffles) and I filled one bottle with their Ginger MapleAid drink,” says Atkins. He also brought Honey Stinger chews, Skratch labs gummies, Split nutrition pb&j packets and Clif shot bloks.

With one bottle filled with Ginger MapleAid, Atkins had room for two more, as he had added a bottle mount behind the seatpost. One bottle was filled with Pedialyte and the other with a 300 calorie per bottle carbohydrate drink product called SustainElite. To get ahead of the Emporia, Kansas heat, he froze all the bottles in advance.

To help with hydration, Atkins also put a 500ml soft flask filled with SustainElite Carb Shot in his skinsuit pockets. “This is a super-concentrated drink product, which sits somewhere between a gel and a drink mix,” he says. “Highly recommended.”

“I think most cyclists have a good idea of what works for them, but I would 100 per cent recommend something real and satiating, like a sandwich,” says Atkins. “Look for something with a good amount of calories. A ‘bomb’ of calories, taken every 100km or so, does wonders to finish your ride strong.”

His “bomb” was a 600 calorie peanut butter, strawberry jam, salt and banana wrap tucked in his skinsuit pocket.

Though he drank a few cans of Coke from bystanders during the race itself, he made an effort to not let himself get too caffeinated. “In the heat, avoiding caffeine is a good idea,” says Atkins. Caffeine could increase heart rate and cause more stress to the body. “I avoided fuelling with more than a small amount (20-30mg) of caffeine.”

Atkins was consuming around 400 Calories per hour throughout the race. He used a continuous glucose monitor and the SuperSapiens app to relay his blood glucose level to his watch—he says it was a game-changer, as he was able to monitor his glucose level in real-time and keep it in an ideal zone for the entire event.

“My biggest mistake was not bringing enough savoury items,” says Atkins.”I should have brought some chips or a sweet potato.” Despite the sugar-heavy food load, Atkins says he was happy about how well he felt, and surprised to find that some pros he encountered weren’t also putting more emphasis on nutrition. 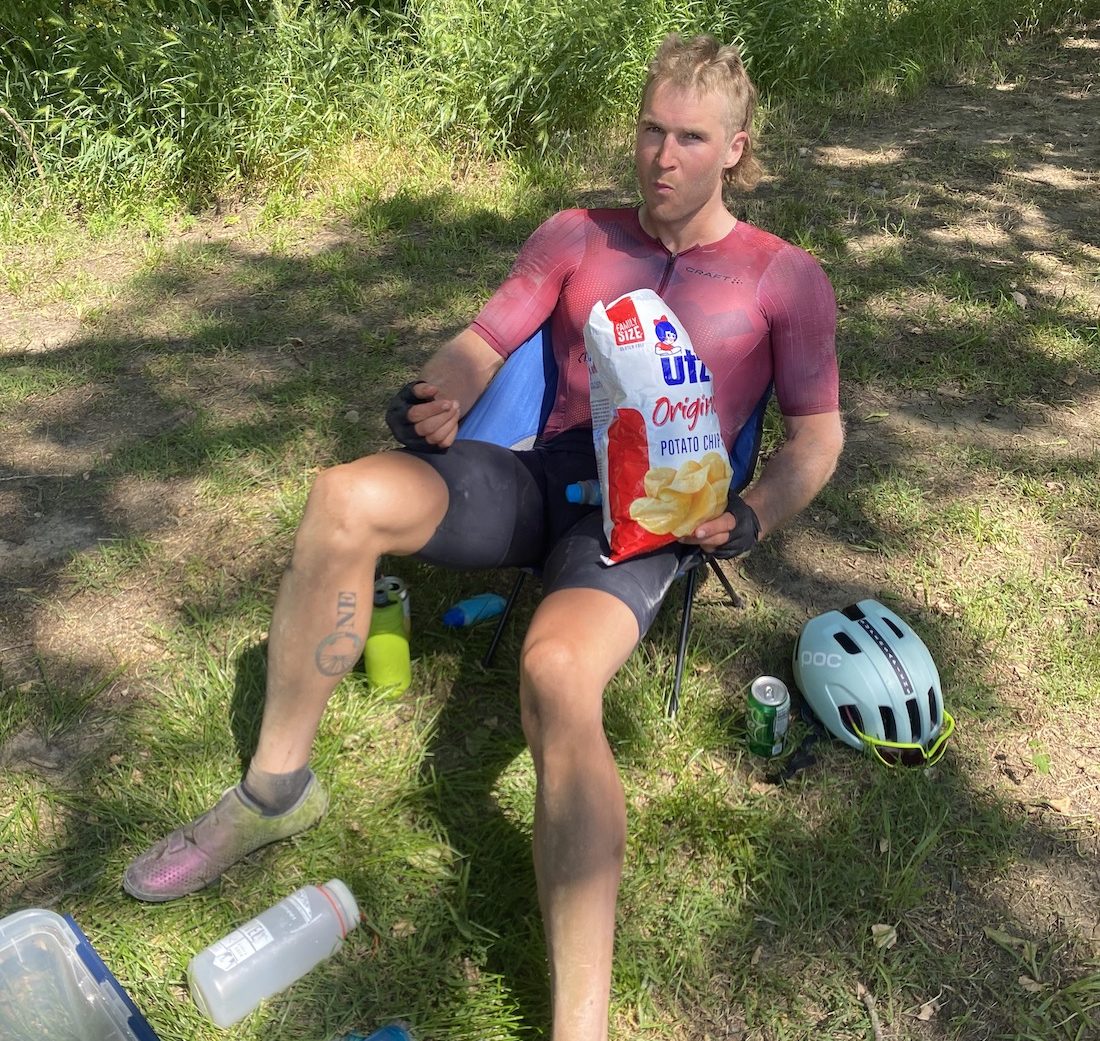 “I spoke to several pros out there (who were also plagued with flats), that had run out of food or weren’t eating—this was shocking to me,” he says. Thankfully, he says he had more than enough food for the ride, and he even got some chips in the end too.