As luck would have it, in February, an airline seat sale to Hawaii was brought to the attention of me (Noah Rosen) and my partner, Suzanne Carlsen and a few of our keen bikepacking friends, along with thoughts of warmer climates. A few cycling friends had been to the island of Maui the year before and talked about the fun they had there. We booked our trip without plans for hotels or moving around the island. 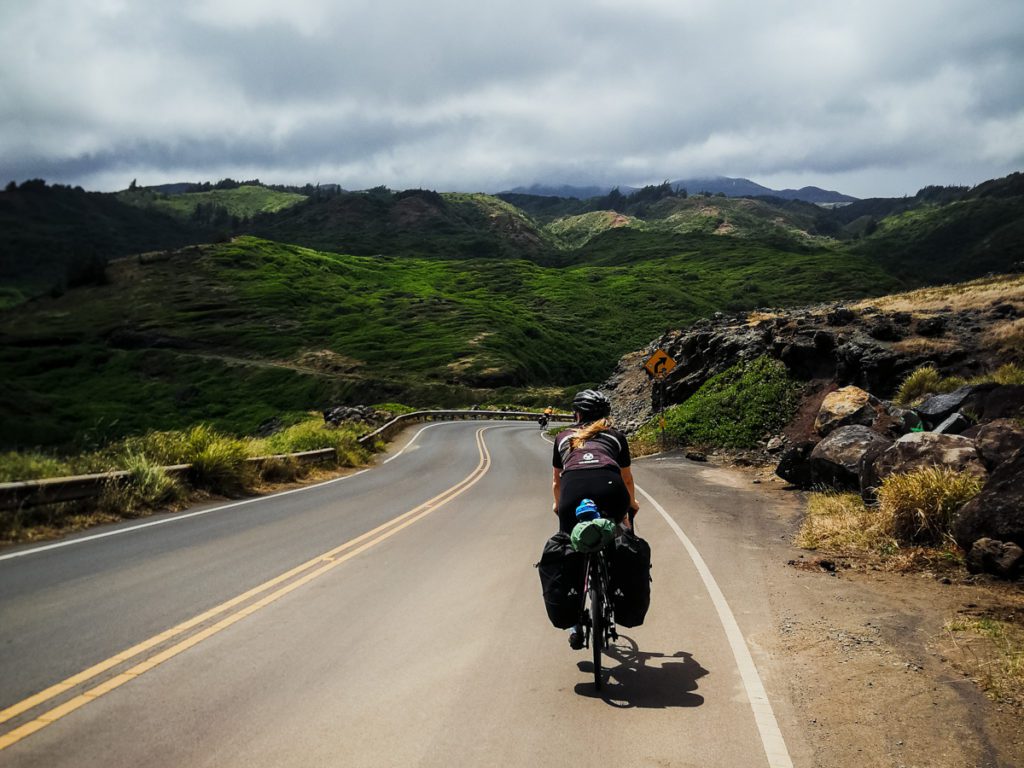 We camp frequently, although we’ve never had a proper bikepacking adventure and if you’ve been to Maui you’ll know that prices of accommodations can be prohibitively expensive. There are plenty of campsites available on the island within reasonable distances from each other (for seasoned cyclists) that offer affordable alternatives to hotels and air bnbs. For the eight days, we booked two different sites that we would travel back and forth between. Then we put together our lists of bags, cooking needs, clothing and so on. While minimalist bikepacking is on trend these days, we prefer the ease and carrying capacity of traditional pannier packing.

Panniers are the quintessential item for bikepacking. They hold your gear, keep it safe from precipitation and dirt from the road and give you a chance to balance it our evenly on your ride to maximize your riding enjoyment and efficiency. We chose Vaude Road Master and Vaude Back Light Aqua panniers. 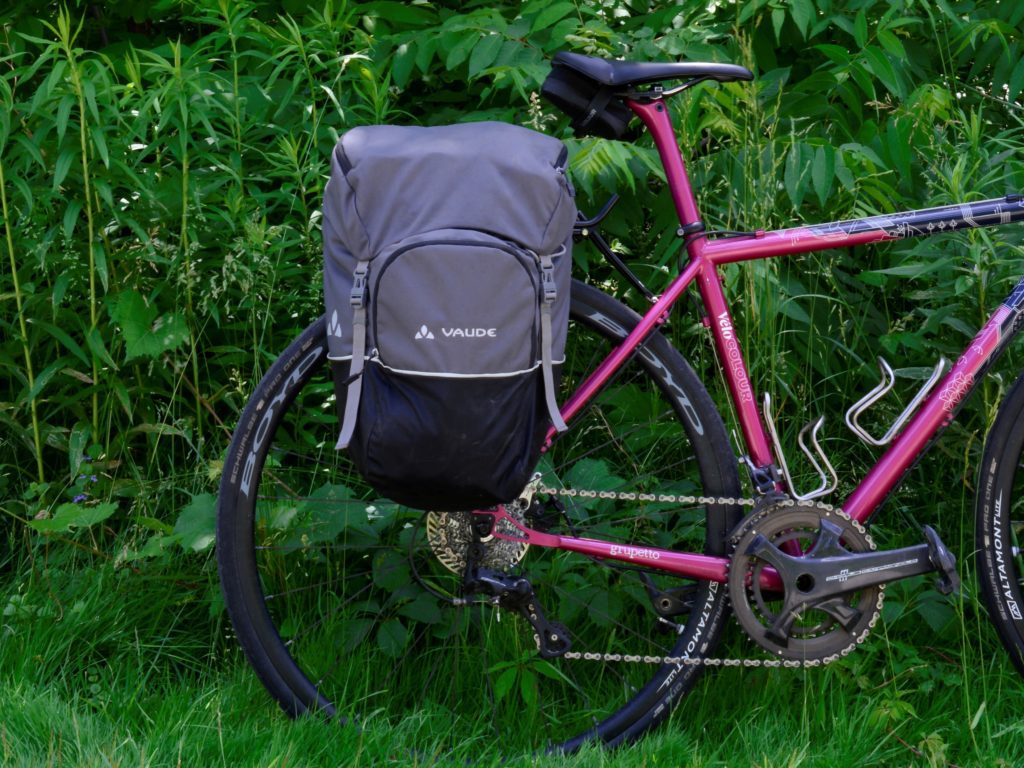 Vaude is an experienced player in the bikepacking scene and their panniers showed it. Both the front (36 l)  and back (50 l) Road Master panniers are loaded with features. The main compartments have a top-lid closure for items you might need on the road and the patch pockets on the front of the panniers were great for storing maps, energy bars and other small items. Their QMR 2.0 system lets you get the panniers on and off your ride with ease, but also lets you lock them to the hook with a bike lock. Riding on rainy days is challenging enough when you’re loaded down with camping gear, but not a worry with these panniers, since they come with both rain covers and reflective stripes to increase your visibility.

The Aqua Back Light 48 panniers (48 l) are designed to be lighter and more minimalist design without sacrificing toughness. The 2D-welded material is amazingly tough and waterproof, as is the simple, lightweight roll-top. Compression straps kept our stuff as close to the bike as possible. The same QMR system for attaching and locking the panniers to your bike as the Road Master came in very handy at stops and at the campsite. 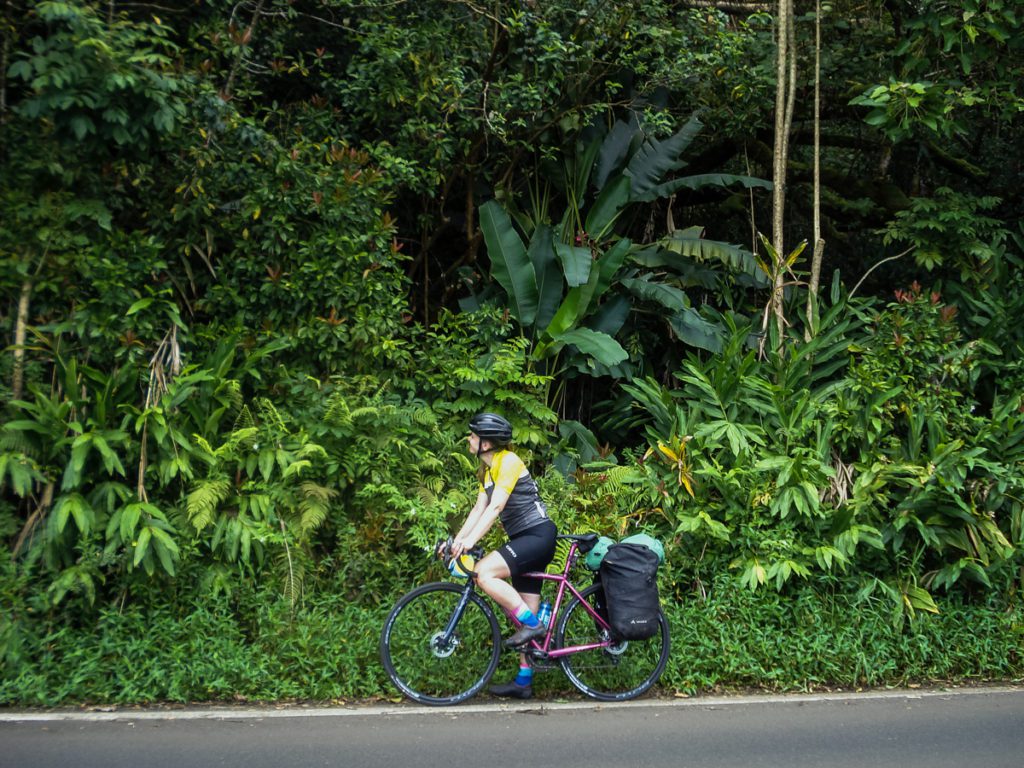 Once our equipment was carefully stored in our new panniers, we were off to find out that although Maui doesn’t see many cyclists, it is an unbelievable place to ride a bicycle. Tourists flock there, rent cars and drive between the attractions and beaches in surprising numbers. In fact, some of the highways are busy with car traffic around the clock.  Many locals and tourists alike were surprised to see us travelling by bike, but the truth is that we got to see the island in a way that few others have. 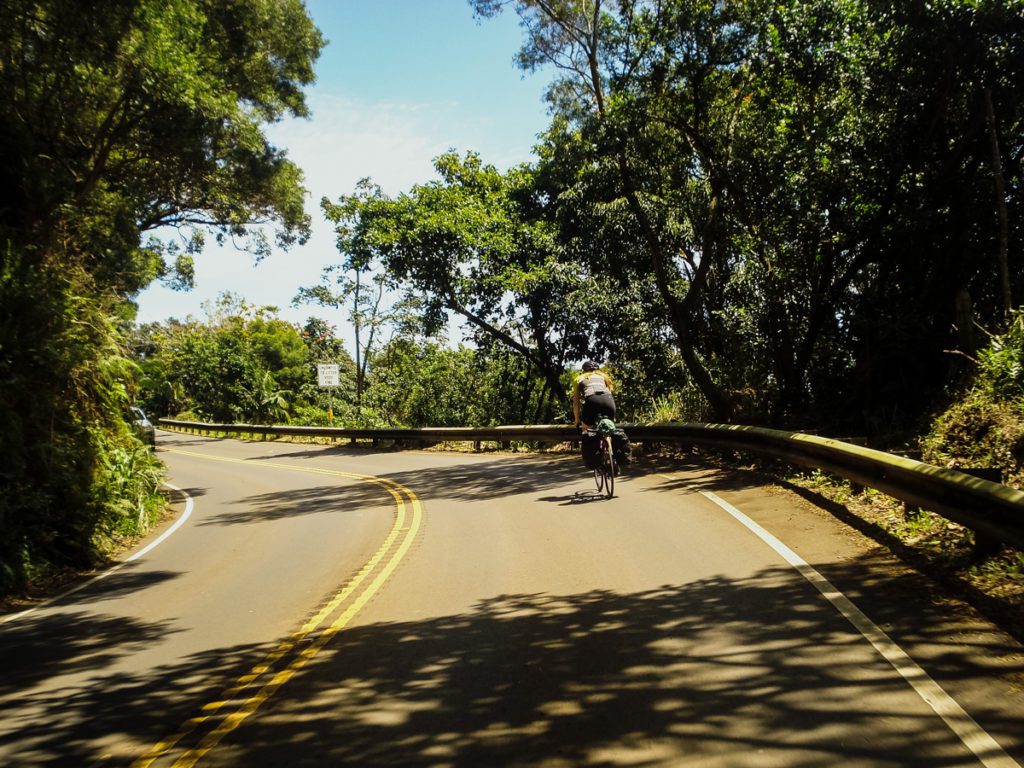 The larger highways offered ample shoulders for comfortable riding, well away from the traffic. Though they were safe, the large roads that cut through the centre of the island were mostly open, fairly flat and likely not on the scenic maps.  The smaller highways and roads, however, were the real gems. The incredible Hana Highway that hugs the South-East coast of Maui is listed as one of the best driving roads in the world. The highway winds through dense tropical rainforest climbing up to stunning ocean views before turning inland and dropping down to narrow passes traversing volcanic water flows. Small one-way bridges here are plentiful and offer beautiful views down to the water and swimming holes below which we of course we took advantage of too cool off in the hot humid air. 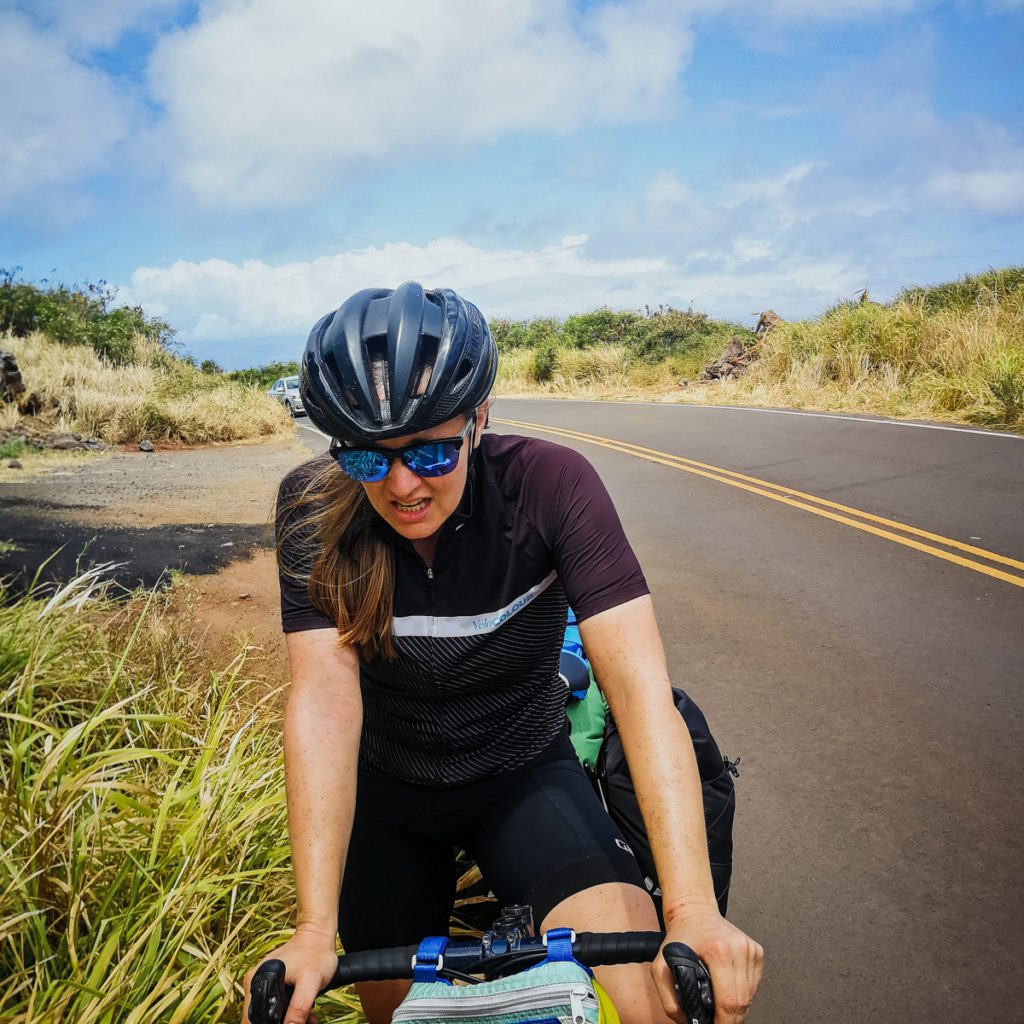 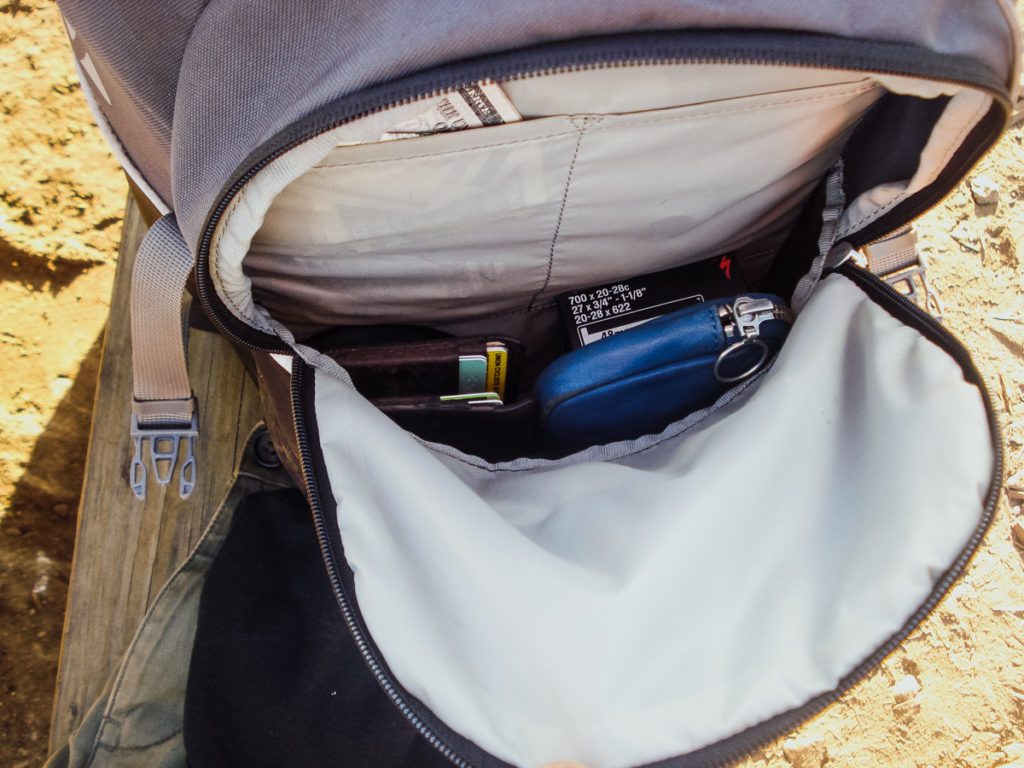 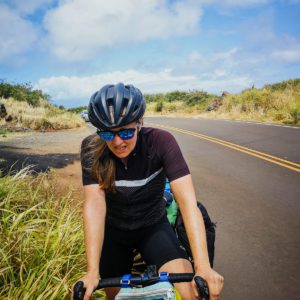 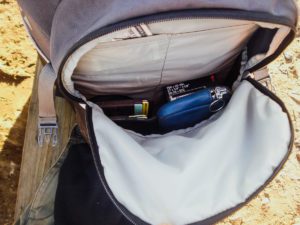 Loaded bike touring through these winding roads felt like a special treat as cars could not travel much faster than us and passed us slowly. The ebb and flow of repeated climbs and descents up to ocean lookouts and back down to the small rivers and waterfalls was accentuated by the thirty-odd pounds each of us carried in our panniers, including camping stoves, food, cycling kit and perhaps a snorkel or two for some coastal adventures.  The weight was noticeable as we applied heavier than normal braking to compensate as we headed around the multitude of blind corners and damp roads. Slower ascents forced us to move at a casual pace and take in the depth of the scenery in a way that would not have been possible travelling by other means. We had many amazing days between campsites, starting with breakfast, a quick ocean swim and a bicycle ride.

Loaded bike touring, paired with ocean-side campsites, waking up with the sun and climbing into our tents just after an outdoor meal and the oncoming darkness felt like the most natural way to explore such a truly stunning place and enjoy it in the best way possible. 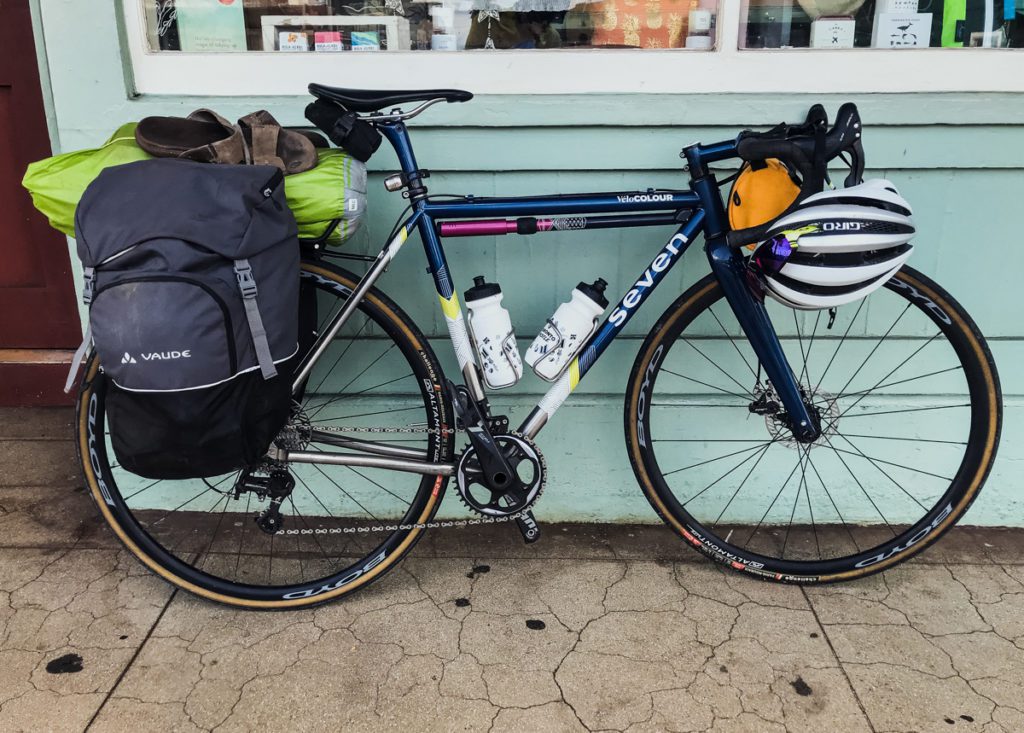 A properly set up rack and pannier system can carry more stuff, more comfortably than seat bags and frame bags. 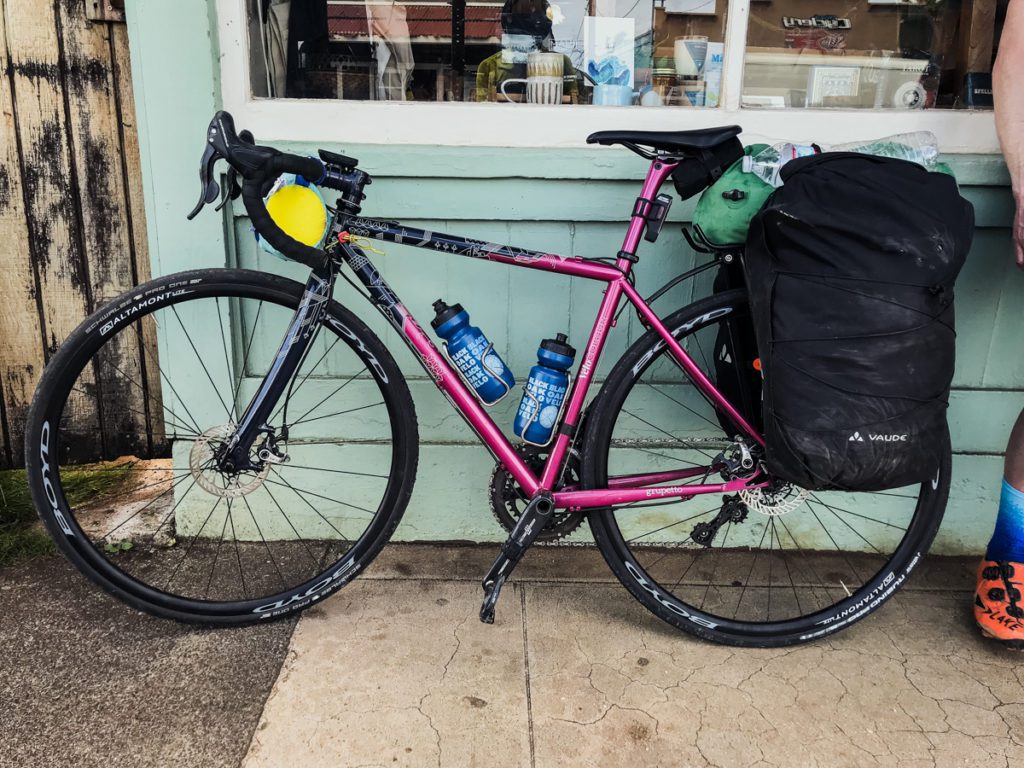 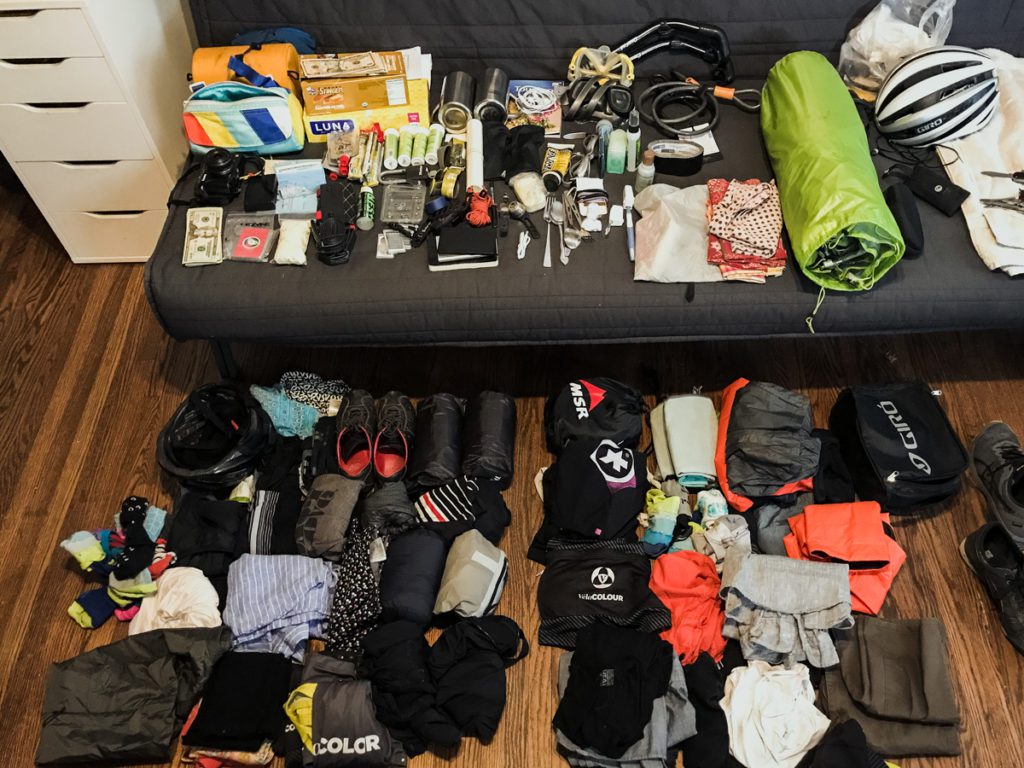 The panniers provided a place for all the supplies needed for a proper adventure. 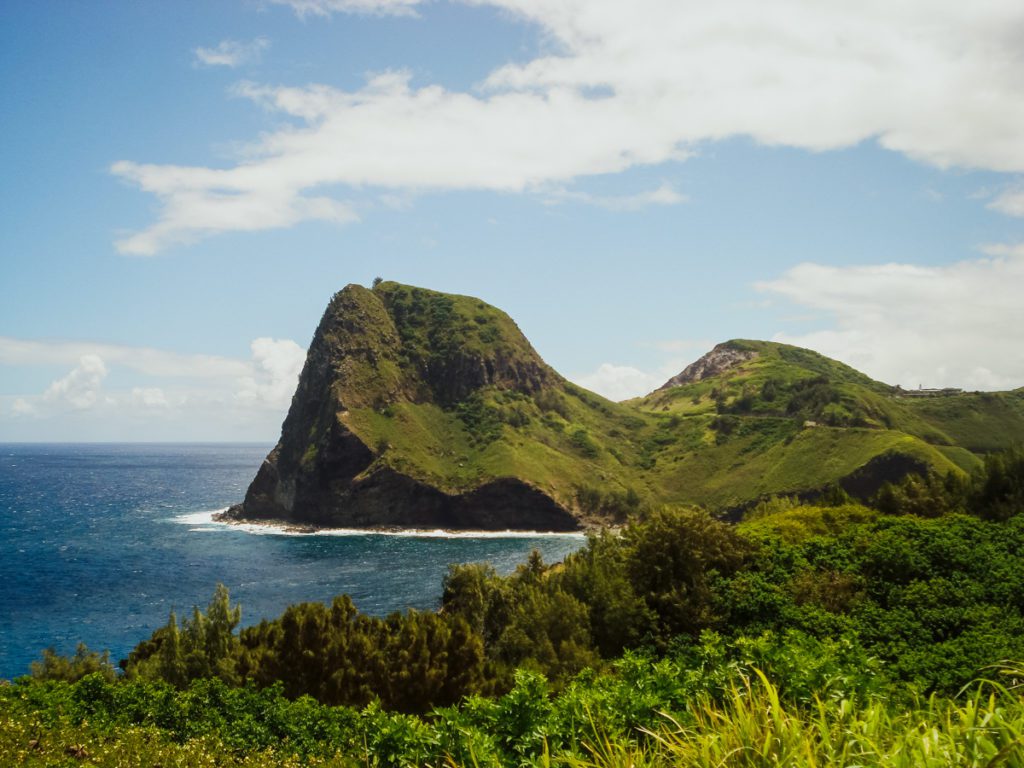 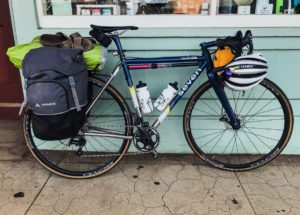 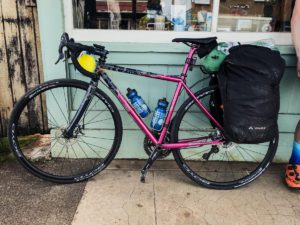 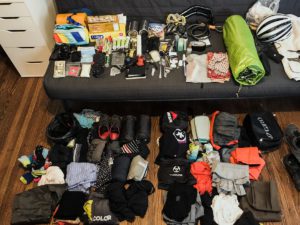 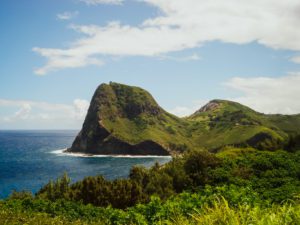 Noah Rosen and Suzanne Carlsen run Velocolour in Toronto, a company that specializes in custom bike paint jobs and accessories.