MS Bike is riding on for 2021, and the Multiple Sclerosis Society of Canada is getting creative with how they’re helping riders train for, ride and get rewarded for their effort.

MS Bike is offering exclusive finisher medals to anyone who finishes their 90-km ride, in one day or over multiple rides, between September 12 and 18. There are also MS Bike ambassadors working across Canada to make sure this year’s event is just as fulfilling for riders as any other year.

We talked to two MS Bike ambassadors about what they’re doing to make 2021 MS Bike the most exciting year for new and returning riders, and why this year’s event is more important than ever.

Wanda Bouchard-Barry is one of MS Bike’s most committed ambassadors. When she brings her ride to the streets of Regina, Saskatchewan this summer it will be her 28th year of MS Bike.

For Bouchard-Barry, there was never a question whether or not she would participate in MS Bike this year. Since her first ride, it’s been an incredibly important part of her year.

“MS is my life. Participating in MS Bike for many years has become a part of my life. Nothing gets in the way of MS Bike – birthdays, anniversaries, even weddings! One year my niece had to ask when MS Bike was taking place – she was planning her wedding and didn’t want to book it on the MS Bike weekend. She really understood how important this was to me.”

Bouchard-Barry’s connection to the event started with her MS diagnosis in the early 90s.

“The information about MS Bike was shared with me by my pharmacists. They said that they were going to participate because of me. Neither of them were cyclists at the time. They raised over the fundraising minimum and took part, so I decided that if they were going to ride for me, I would volunteer!” 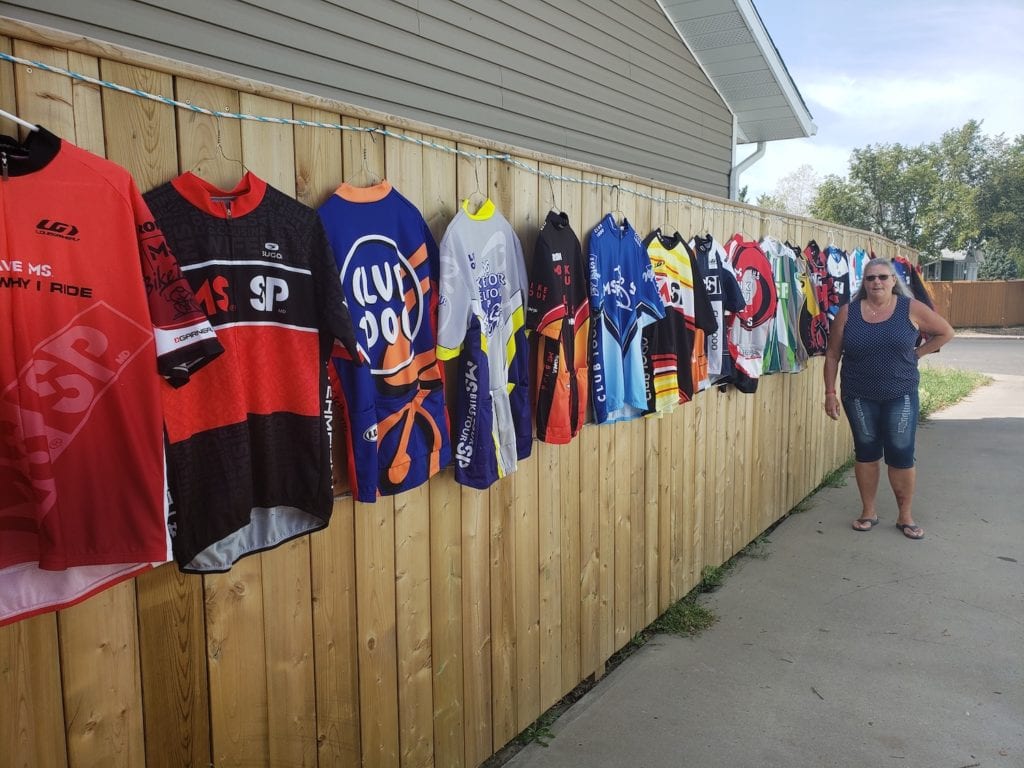 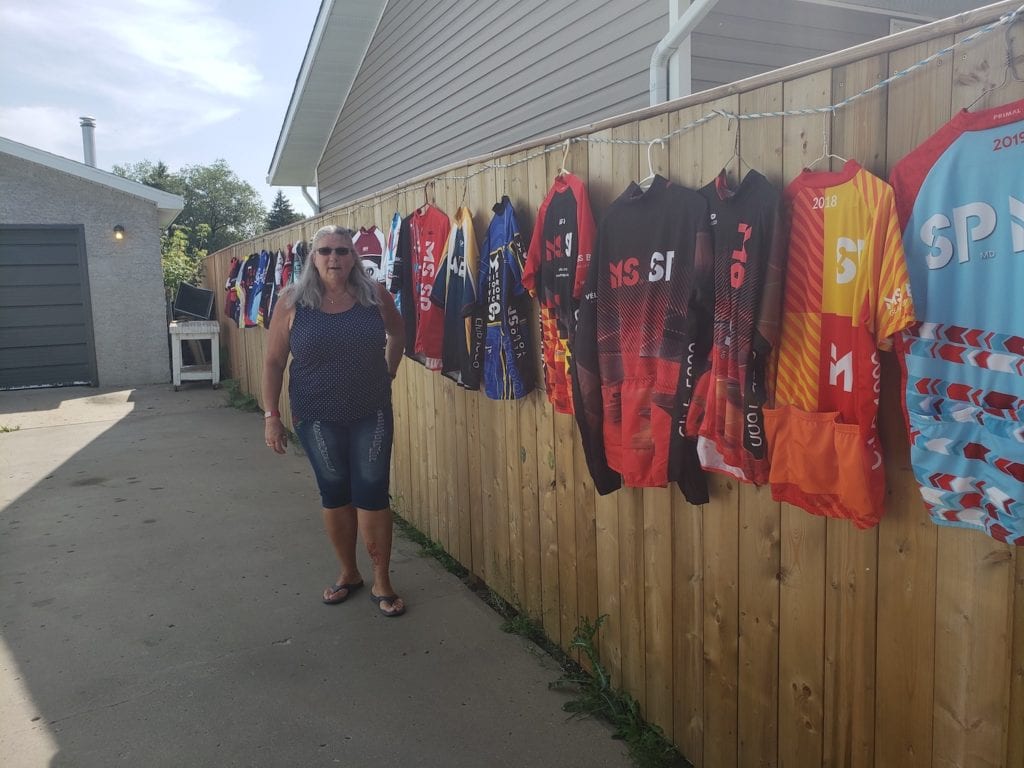 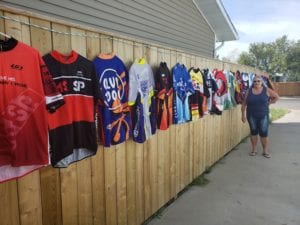 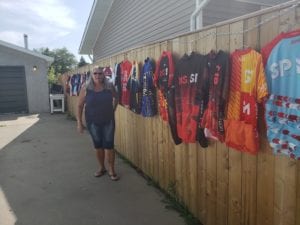 From volunteer to dedicated rider

Bouchard-Barry volunteered at MS Bike in 1992, driving a support vehicle. What she saw that year inspired her to change how she was involved.

After three decades, the tireless cyclist and fundraiser is as dedicated as ever. She still remembers the early years, before she was an experienced rider and fundraiser.

“I found it hard to do, hard to raise the minimum at the time, which was $195. But, over time, all of those $5 donations have grown into so much more. I have a wonderful group of friends who continue to support me over all of these years, they believe in the cause and in me.”

Now, Zena’s Warriors have raised thousands of dollars over nearly three decades. Since the event is so close to home, Bouchard-Barry and Zena’s Warriors are bringing that spirit to the online community event.

“Although we can’t ride together, we have a route mapped out and we’ll be sure to mark the occasion safely afterwards in celebration of yet another MS Bike gone by.””

Riding to make a difference

For the 28th year, the smaller celebration keeps a personal touch when the usual crowd of riders are absent. It suits the continued role the MS Society of Canada has in Bouchard-Barry’s life, and the daily lives of so many Canadians living with MS.

“The MS Society was my lifeline. They were there when I needed help to understand my diagnosis, I cannot thank them enough. They were a source of information and support. If I had questions, they had answers.”

MS Bike opens an opportunity to give back after those early years, but also look forward. For Bouchard-Barry, the motivation lies in the opportunity to make a real difference.

“I want to know that in my lifetime I have done something. I want to raise as much as I can for as long as I can, to help make a difference. To help fund research, without research we would have no medication for MS (we have many different kinds now). Back when I was diagnosed, there were no medications. We have come a long way since then.”

“We are all hoping that someday soon there will be a cure found. It is my hope that no one would have to go through what I had to, to get diagnosed, to get help, to get medication.”

For Bouchard-Barry, that hope is all the motivation needed for another year of riding.

“I need to make sure that while I am still able to, that I do my part to end MS!”

Not every MS Bike story starts with a personal connection.

“I originally just wanted to get involved in physical activity outside of biking to and from work and wanted to meet other cyclists,” says Jonathan Bragdon. 15 years later, he’s still coming back.

“I always speak highly of this event and have missed the in person atmosphere that it creates. After you’ve participated once, you really just can’t wait until the next event. “

With the event going virtual, Bragdon’s leading Team Canada to help others get through the added challenges of a virtual event.

“You really have to just get on the bike on your own motivation because there is not that physical in-person event you have to show up for,” says Bragdon. “There is not that, ‘I can’t let anyone see me give up because I didn’t train hard enough’ feeling.” 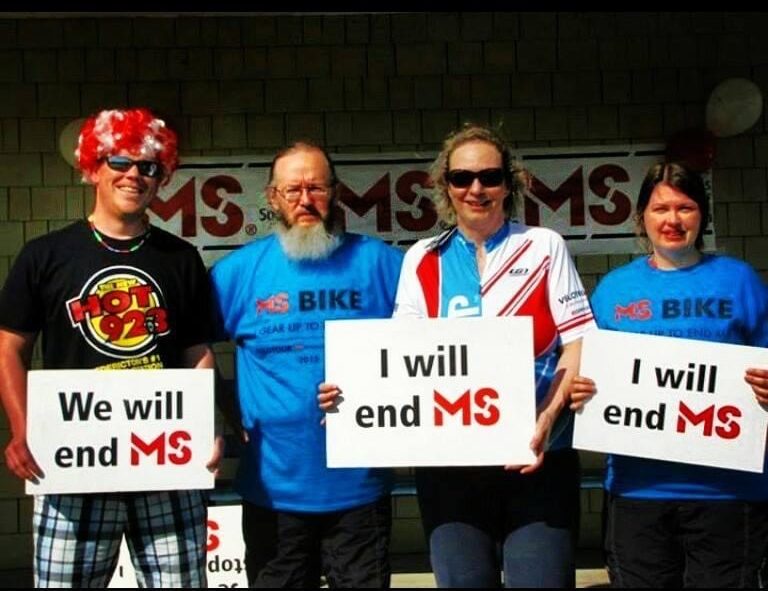 Riders from coast-to-coast can register to be part of Team Canada through the msbike.ca website. Signing up with the group gives you access to training tips and a virtual meet and greet before the big ride day on September 18. For Bragdon, the extra effort to keep an in-person atmosphere at a virtual event is worth the effort.

“The pandemic had made fundraising difficult for the MS Society of Canada in 2020 and 2021. Fewer donations have come in but Canada’s rate of MS per capita still remains high,” says Bragdon. MS is the most common neurological disease affecting young adults in Canada.

“We need them more than ever so we can one day see an end to MS!”

So, whether you create your own team for a virtual ride between September 12-18, or join a nationwide team for your 90km, all MS Bike cyclists are riding together. In this cause, all roads lead to a shared finish line: A world free of MS.