Judith Kasiama remembers watching the Vancouver Olympics as her family was making the move from Democratic Republic of Congo Canada in 2010. Seeing people exploring the mountains, she thought, “I want do to what those people are doing.”

Two years later, Kasiama arrived in to Vancouver and started exploring for herself.

“I didn’t know exactly what that entailed, I just know I wanted to try the hikes, the skiing, all these things that made me want to move here.”

As Kasiama dove deeper into Vancouver’s outdoor community, she noticed a distinct lack of diversity in media representation. In response, she started Colour the Trails.

“I started Colour the Trails to start changing that narrative to show that there is a diverse group of people that is engaged in these spaces and that they’re not alone, but maybe just don’t get recognized, or don’t get the support they need,” says Kasiama. The group also functions to create “opportunity to come together as a community and do things together so we don’t feel like we’re the only ones doing these things.”

Colour the Trails started with hiking and skiing. Lately, cycling has become a big part of that outdoor experience for Kasiama. Even more so during the last year of health restrictions. 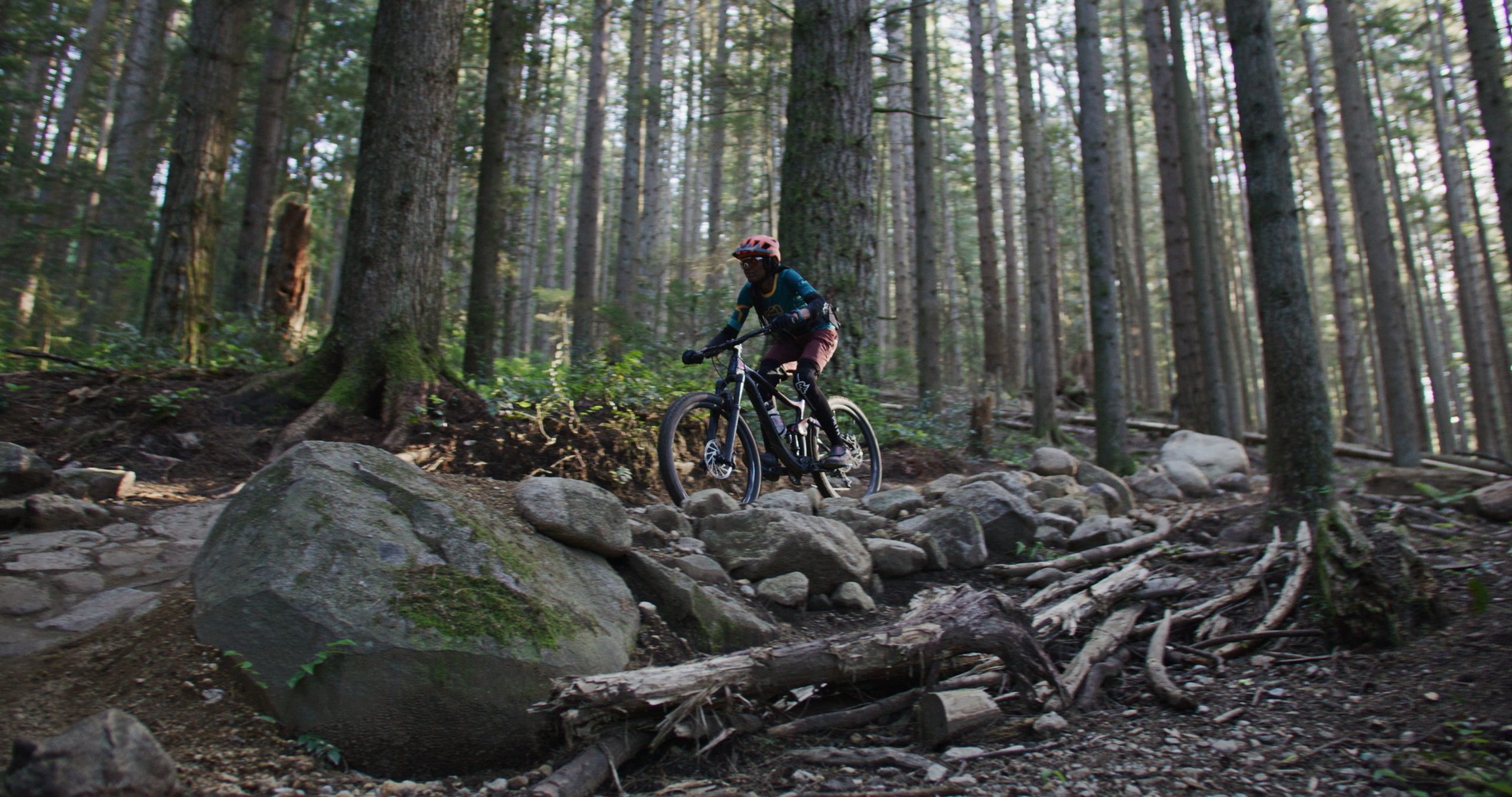 “Cycling is playing a huge roll in my life, to be honest. I find I’m starting to eat-sleep-breathe bikes. I’m constantly trying to learn everything I can,” Kasiama says. “For me it has given me a lot of great mental health freedom, especially when we’ve been super limited or restricted in how we’ve been able to do things. Cycling has been one of those things that has brought me so much joy, and so much community. To be able to meet up with friends, whether its to go mountain biking or just cycling around Vancouver has allowed me to retain that sanity even when restrictions were most strict.”

Exploring the new sport has opened up Vancouver in new ways. In a city that can be hard to break into, both riding on roads and on the trail have opened up new avenues to community. 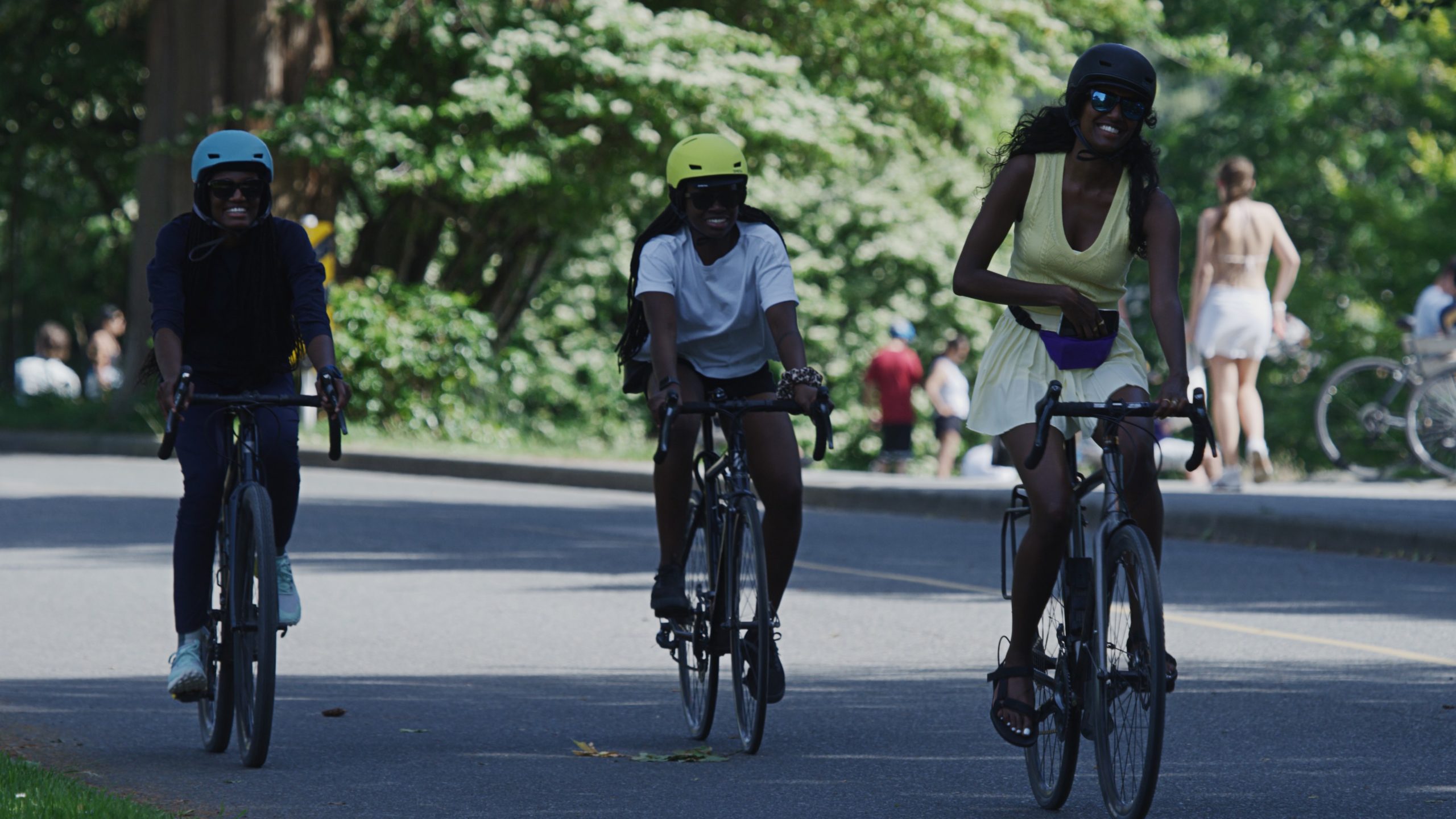 The joy of commuting by bike

While Colour the Trails is focused on the mountains, the everyday aspect of cycling is an important part of that project. One thing the last year revealed is just how big a part of Vancouver life cycling is.

“I think a lot of us saw with lockdown and the restrictions that cycling has always been a form of commuting for a lot of people. We just saw that expanding even greater during the last year. It’s another means of transportation for people – globally, but also here in Vancouver.”

Commuting can seem separate from the extreme trails of the North Shore, but its all part of the cycling community. And an aspect that is much more accessible. To stay safe on those rides, the Smith Express ($130 [MIPS], $90 [non-MIPS], smithoptics.com), is a good match for Vancouver’s variable weather. The Express has an integrated rear light for darker, rainier days and a removable visor to protect against summer sun.

“It’s transportation, but it’s also a low barrier option. Not everyone gets the most expensive bike, so you can get whatever bike – second hand or anything – and get that freedom to commute, to get from Point A to B, and I think that is the most important element of showcasing cycling as a sport that is very inclusive and welcoming.”

“For me, personally, it’s a wonderful way to feel like a kid again,” Kasiama adds. “Even commuting, you don’t really realize how long you’ve biked until you stop and see the distance you’ve accumulate” 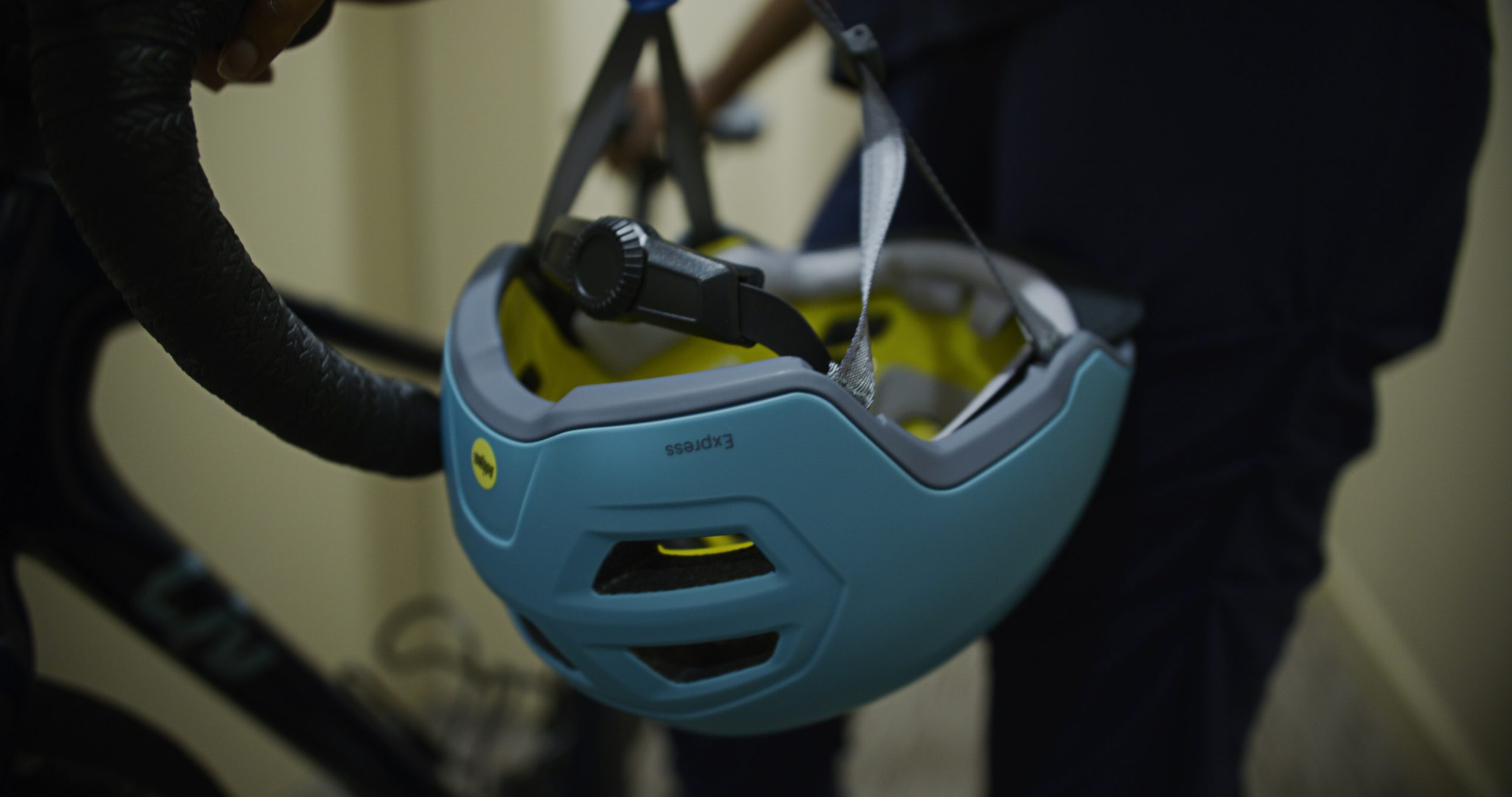 In a city that doesn’t always have a reputation for being the most friendly, riding a bike has proven a simple way to break down barriers. For Kasiama, this community aspect of the sport is as important as any functional or fitness benefits.

“Vancouver can be a very lonely city, it’s really hard to connect with people. I’ve found through cycling, whether that’s mountain biking or on the road, it really has been a way to form that community, connect with people at different levels and form new friendships. It’s so easy to communicate with people on trails or the road and chat. It just makes Vancouver seem less lonely, for me personally. I find that it’s opened up the opportunity to have a true community through cycling”

“I think the community aspect is the most important for me, personally, the way you can come together as a community.” 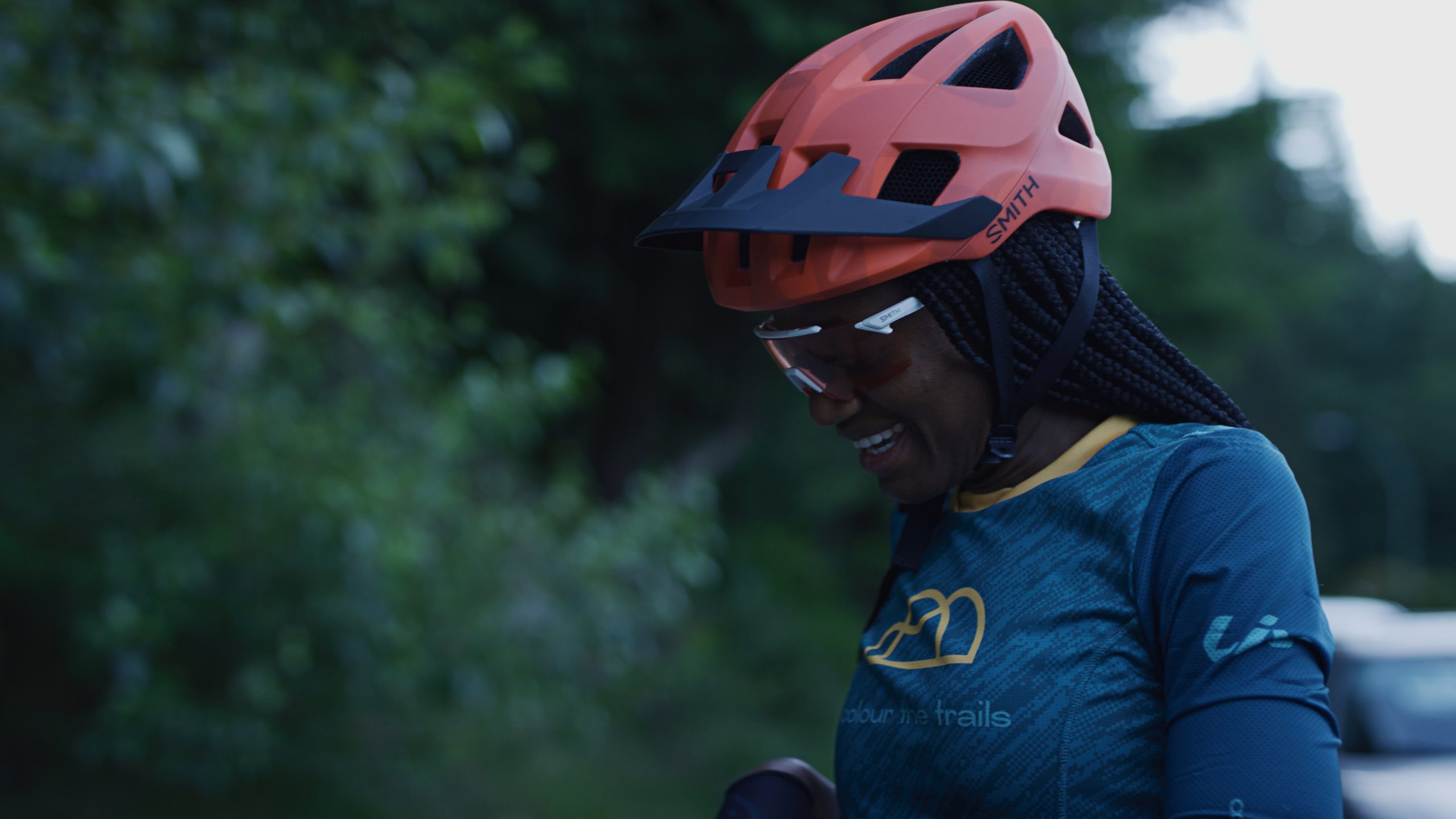 “Community starts with an invitation.”

Colour the Trails’ motto is simple: “Community starts with an invitation.”

“I think the best way can begin to connect and engage with people is through an invitation,” explains Kasiama. “It is about inviting people into our passion, into our skillset, into whatever it is that we do. It’s extending that invitation to others to come try what were doing and see if others will join us on that journey.”

Bringing people together also acts as an opportunity for learning, and engaging in ways that might not otherwise be possible.

“It also fosters conversation about race and racism and why it needs to be inclusive outdoors, and what it means to create opportunity for others in the outdoor space who many not have grown up mountain biking, who may not be from Vancouver,” says Kasiama. “How do we create that opportunity of engagement? There’s so much beauty and power in the interactions when we invite others into our space, our homes, and make them feel welcome.” 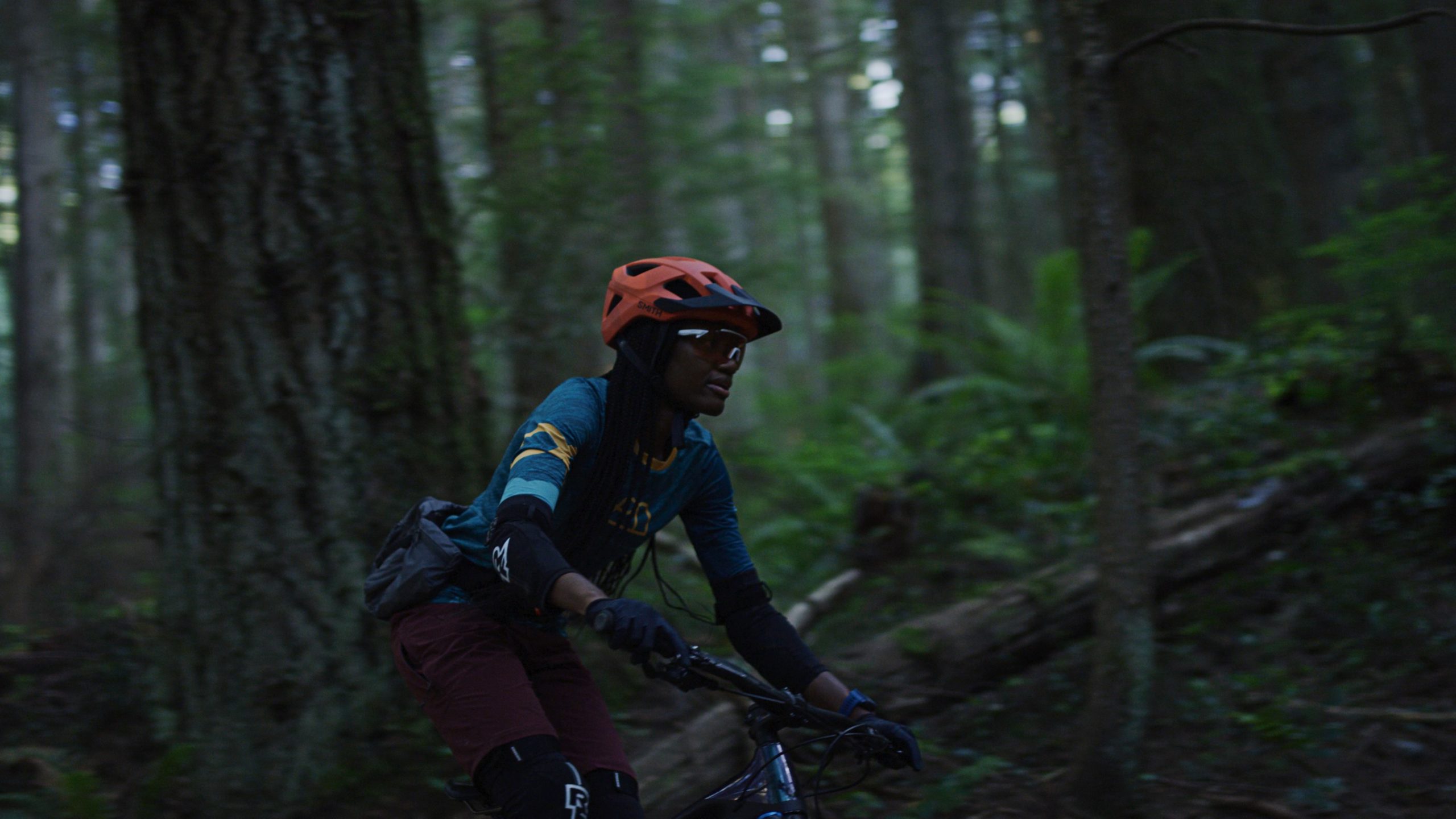 It was exactly one such invitation that led Kasiama to the trails of North Vancouver on a mountain bike.

“We received an invitation from local bike shop owner, coach and guide, Jaclyn [Delacroix], to host an intro to mountain biking clinic. Together we’ve working together to create an opportunity for 30 people to show up and learn how to ride a mountain bike. Getting that coaching amplified what myself and a lot of other people were feeling, that we wanted to be part of that community.

The partnership didn’t stop there, though. It’s grown into a whole network of connections.

“Colour the Trails advocates for inclusivity not just in the short term, but looks for how do we create opportunity so that it becomes a long term opportunity, or lifestyle for other people. So Jaclyn and I decided to create a mentorship connecting experienced riders to non-experienced riders and just have them ride together. Jaclyn is my mentor, so we’ve been riding – in the beginning once or twice a week – just getting familiar with the mountain bike and how to ride on trails on the North Shore, which are some of the most difficult trails to ride. That’s how I’ve come to love mountain biking and biking in general. Just because that environment felt welcoming, and the genuine support system that I can do this, meeting me where I’m at in my journey and giving me the tools that I need.” 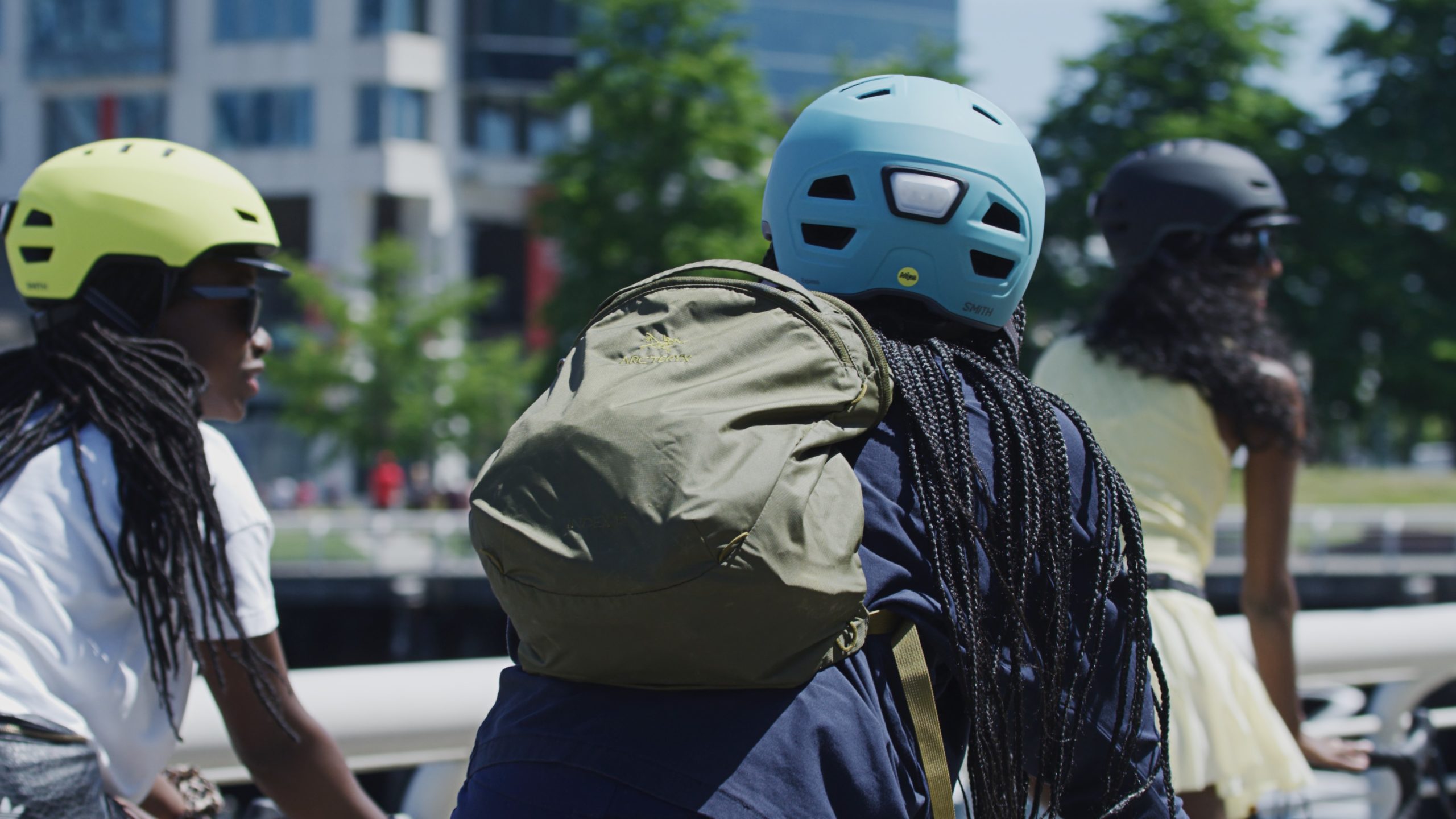 A broader and more open community

Creating those connections helps breakdown barriers for new riders getting into the sport. It also helps expand the cycling community.

“Receiving an invitation from Jaclyn has opened up many opportunities, not just for myself, but for other members of Colour the Trails as well. Mountain biking’s become our lifestyle, and we’re able to connect and engage with the community that we didn’t really interact with. Now people on trails know Colour the Trails, they know us, we know them and we’re forming this community we can come and be part of”

An inclusive space is crucial to expanding the cycling community, on trails and in the city. It also has broader benefits.

“It’s helps people like myself that are in a sense late bloomers, to be able to join a space that is free of judgement. To be able to learn and engage and be part of learning something new. It’s really difficult to learn a new sport as an adult, so creating a space that helps people stay hopeful is how we begin to get people in the outdoors but also how we get people to care about the environment, and how nature and conservation impact us.”