“That could have been bad, real bad,” says the cyclist next to me. A gust of wind coming off the St. Mary’s Bay had just pushed my bike sideways, almost smashing me into him. I reacted quickly, and now I’m steady. It was one of many close calls on my first gran fondo, in Baie Sainte-Marie, N.S.

My face wrapped in a mask, my hands in winter gloves, it’s 10 C in September. Locals rattle cow bells and jump up and down with motivational signs: “It’s just a hill. Now get over it.” Maritime humour.

Heading back on the 67-km loop toward Church Point, where a steeple higher than the Statue of Liberty beckons riders, as it does fishermen coming to shore. St. Mary’s Church is the largest wooden church in North America.

In only the ride’s second year, with almost 900 riders (double the number from its first year), the Baie Sainte-Marie Gran Fondo is the largest bike event in Canada east of Quebec. The race also offers a glimpse into the region’s quality road cycling and its intriguing history.

“Here in Clare, we are blessed to have hundreds of miles of scenic, accessible and safe roadways for cycling,” says Larry Peach, tourism manager for the Municipality of Clare. For the 2017 event, organizers are showcasing more of those roads with a 161.5-km loop, the new super gran fondo, with 1,083 m of climbing. Riders can also choose from 35-km, 67-km and 120-km rides.

Set near the southwestern shores of Nova Scotia, most of the road cycling in the region lies in Acadian territory. The Acadians are those French colonists who remained in Nova Scotia following the British military campaigns against France. In 1755, assuming the Acadians were helping the French, the recently victorious British government began the Great Expulsion. Acadians were sent to other British colonies, and later, to France itself. Many died from cold, starvation and disease. Roughly 1,000 Acadians died en route back to France. Later, some returned to Nova Scotia. Today, riding through the historical fishing villages, many homes painted the colours of jelly beans have the French Acadian blue, white and red flag hanging from their front porches.

On a 74-km route starting in Belliveau Cove that shares roads with the fondo, I see whitecaps smash and spray against the rock cliffs. It’s possible to ride uninterrupted with few traffic lights or other barriers all the way to Yarmouth to the south. But with the plethora of natural and historical detours, it’s easy to take rest stops.

Continuing along Highway 1, dubbed the “longest main street in Canada,” feeling the cool spray of salt water on my face, I’m reminded of growing up in Halifax. It’s only when you move inland that you realize the sea’s impact. Cycling past the town of Meteghan, established in 1785, the red fishing sheds and wharves are reminders of a simpler, and slower, time. If you ride to Smuggler’s Cove, you should really get off the bike. During prohibition in the ’20s, a nearby cave, only accessible in low tide, was the perfect stashing spot for rum-runners taking shipments to the U.S. Today, when the tide is low, you can take the 80 steps down to walk the ocean floor.

Farther still along the route, Port Maitland Beach is one of the longest beaches in the province: when the tides go out, the 13-kilometer beach triples in size. At night, the star-studded sky is legendary. The final stretch of the route leads to a Maritime gem: built on a rocky shore, the Cape Forchu lighthouse overlooks the Yarmouth Harbour.

A tour inland feels completely different from the the coastal rides. The Yarmouth County Rail Trail starting in Weymouth meanders through farms, woodlands, lakesides and dense forest for a 100-km loop on a multi-use gravel path. “It’s very isolated, so don’t expect to bike up to a doughnut shop,” says Daniel Thimot, an avid local rider. “It’s so close to undisturbed nature – sometimes you’ll see eagles, birds of every kind, and you’ll certainly see rabbits on every ride. You cross streams and rivers; you’re really in the middle of nowhere.”

But you can’t get far away from water in southwestern Nova Scotia. Another popular inland loop, about 20 km, follows the Meteghan River for a stretch along Placide Comeau Road, which runs past the Bangor sawmill (one of the last remaining water-powered sawmills in the province) and turns into a gravel path. About a kilometre past the mill is the St. Benoni waterfall. Pedal another two kilometres and there’s another waterfall, even larger than the first.

For a combination of lakes and ocean, one local swears by another route. “This ride really makes you feel like you got the world by the ass,” says Beth Wood, a local rider who trained for her Ironman on this 130-km loop. “It’s a stunning roll through sunny lakeside and then ocean.” 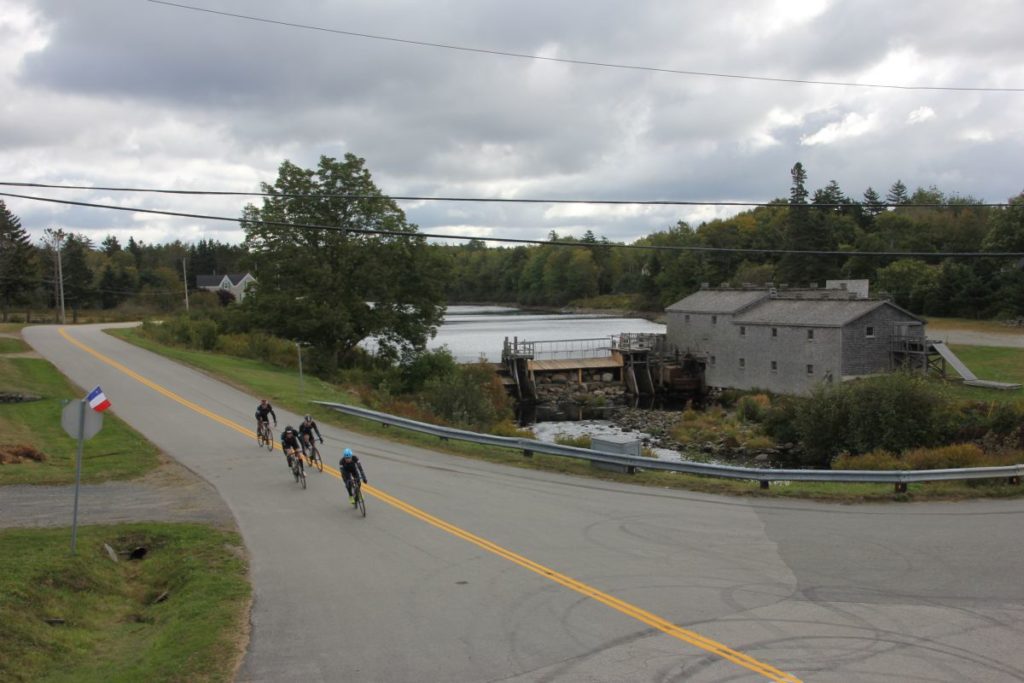 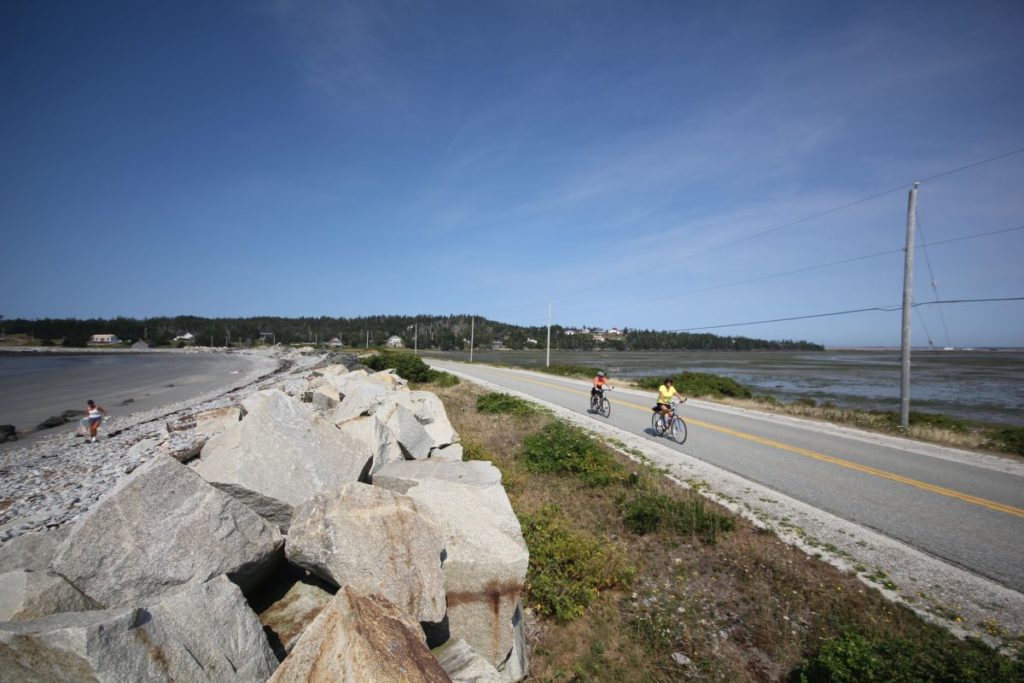 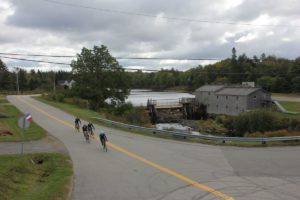 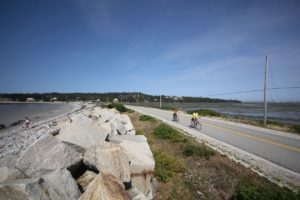 After parking in Ellenwood Lake Provincial Park, the ride begins on the Route 340, a quiet secondary road, and continues through hills and valleys. Once in Weymouth, fill your water bottle from a natural spring. “People from all around come here to get water. It’s the best tasting water, ever,” says Wood. At this point, the road meets up with Highway 1 where the remainder follows the ocean.

At the fondo, I come in third place (in my category). It’s exciting. But really, the trip is an excuse to return to the ocean, and to come home. Even if you’re not from the Maritimes, you’ll feel the same way – especially after riding here.

Acadians love their starch. Râpure or rappie pie – made with grated potatoes, hot broth, and often some chicken – is a classic Acadian potato dish. Fricot , chicken dumpling soup, is another tater-based staple. Find Acadian cuisine at Evelina’s. The restaurant is attached to the best sushi place in town called Kizuna.

Cuisine Robicheau in Saulnierville serves a hearty seafood lasagna. All things lobster and seafood are really best served on a picnic table on the ocean near the Cape View Motel and Cottages at the Cape View Restaurant (902-645-2519).

For best ocean views, the Cape View Motel and Cabins are simple and clean ( capeviewmotel.ca ). Or, for a fancy stay at a Victorian home with a great sunset view, the Château Sainte-Marie is cosy and charming.

Vélo Baie Sainte-Marie in Saulnierville, the centre of the Municipality of Clare, carries high-end road and mountain bike gear.

Ask a Maritimer about Frenchys. The clothing store has a cult following and several locations in the area.

Where to mountain bike

Only three hours away is the Annapolis Valley with plenty of steep descents and rocky technical singletrack. From hard to easy, try The Gorge, Anima Mundi and The Links (Woodville Hiking Trails).

And if you want to explore the province’s bike-friendly communities, Cycle Nova Scotia has detailed maps.

The Gran Fondo Sainte-Marie takes place on Sept. 24. With four routes for participants to choose from there is a scenic ride along the Acadian coast for riders of all levels. The super gran is a 161 km ride for riders looking for a long and beautiful day in the saddle. Riders looking for a nice ride but a little less intense than a metric century can choose from the 120-km gran or the 67-km medio routes. Finally for all other riders there is a the 35 km piccolo ride. For more information visit granfondobaiesaintemarie.ca.