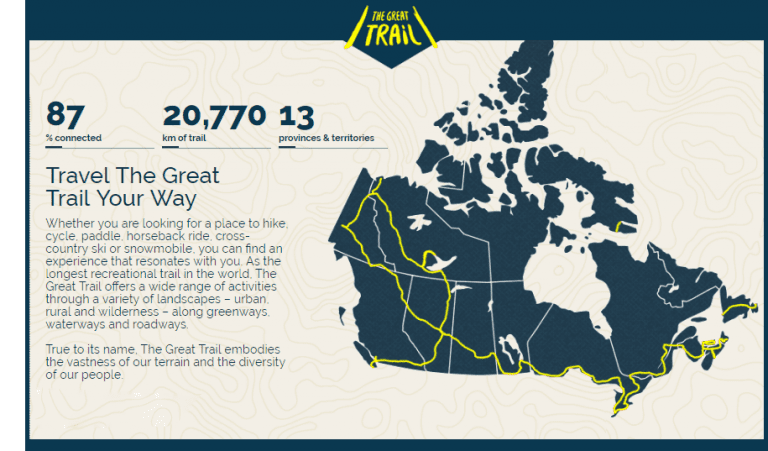 A network of recreational multi-use trails that stretches across the country and through many of it’s most densely populated urban areas is nearing completion. The Great Trail, also known as the Trans Canada Trail, is currently 20,770-km long and 87 per cent connected. The trail is car free and designed to be a destination for Canadians to enjoy the great outdoors and appreciate the beauty the country has to offer. With such a vast expanse of trails, it seems like a cyclists paradise. However, in its current state don’t start planning your cross-Canada two-wheeled trek along it just yet.

Completion of the trail is planned for 2017 for the 150th anniversary of Canadian Confederation with construction having begun in 1992. The parts of the trail that pass through many of Canada’s most densely populated urban areas provides an escape of cyclists living in the city. Four out of five Canadians live within 30 minutes of it.

Though the trail passes through the countries biggest cities, the parts of the trail that have yet to be completed are vital connection points in remote areas of the country. Over 3,200-km still need to be completed before that cross country cycling trip becomes a reality and according to the trails website, these sections pass through unpopulated and remote areas with rugged terrain.

The trail is not a single homogeneous unit either, instead being a patchwork of municipal, local, provincial and national trail networks joined together. In many places the trail is maintained by volunteers. The Trans Canada Trail organization does not-in-fact own or operate any part of the network.

During the summer months cycling, hiking and walking, horseback riding are all possible along many stretches of the trail but not all. The trail is not fully paved either with many sections being gravel and perhaps to rugged for most cyclists. Look closely at the interactive map and you will also see that other sections of the trail traverse bodies of water and waterways meaning kayaking and canoeing are also activities that can be enjoyed along its vast expanse. The many parts that require aquatic transportation make the prospect of the whole trail a difficult prospect for cyclists. During the winter the trail can be used by snowmobilers and cross-country skiers. It also should be noted that the trail by no means takes the most direct route across the country instead zig-zagging in and out of urban areas.

To help facilitate the completion of the trail, hopefully in time for Canada’s 150th anniversary, the Government of Canada is currently matching 50 cents for every dollar donated to the Trans Canada Trail.

Once completed, the network will pass through all of Canada’s provinces and territories. Intended to promote active living and a healthy lifestyle the trail will also encourage active transportation. Its presence can hopefully stimulate tourism and economic development while giving Canadians a means to visit more parts of the country. The trail is also intended to benefit Canadians by deepening awareness of Canada’s history, culture, natural heritage, and preserve green spaces and promote conservation.  The province that will be home to the longest section of the trail once it has been connected is Ontario.